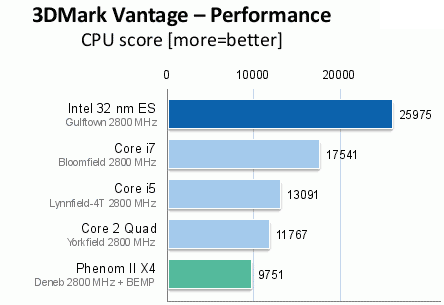 We know the general trend is unchanging: every new CPU generation is faster, smaller, cheaper. And yet, the new i9 from Intel will blow your socks off with its performance (and initially also a hole in your wallet!).

If you can’t wait till its release early next year (only a few months away actually) here are some benchmarks culled from various sites who already tested the i9, also known as Gulftown.

Particularly for tasks such as 3D modeling and video encoding, the 2.8GHz Core i9 is about 50 percent faster than a Core i7 at the same clock speed.

Here are some test results by PCLab:

Not all tests show as large gains, as those limited to a single core or which didn’t properly use their extra code threads saw smaller gains or even no advantage at all.

Some of this is attributed to the prototype nature of the i9 platform, as its memory performance isn’t as high as anticipated for production hardware. Its memory speed won’t be as high as on the quad-core processors, however.

Intel isn’t due to launch Core i9 until early 2010, possibly early as January, and will initially reserve it for high end systems as it should have a high price and consume about 130W of power versus the 95W for most Core i5 and i7 chips.

Here’s some interesting background info culled from the BSN site on the naming conventions of the i9, also known as the sexa-core, duodec-thread Gulftown.

Gulftown processor will use the LGA-1366 socket, already a home for the current Core i7-900 series of processors, so Gulftown will continue to feature 216-bit [64-bit +8-bit ECC per channel] triple channel DDR3 memory. But what makes Gulftown so special is not the fact that this processor does not belong to current Nehalem architecture – this is the first member of the Westmere architecture [the 32nm “tock” in Intel’s Tick-Tock cadence]. Westmere processors come manufactured in the 32 nanometer process, and feature native dual, quad, sexa and octa-core designs.

Intel decided to name processors from Core i9 series with a 1000 suffix, a logical step from Core i5-700, i7-800, i7-900 and now – i9-1000 series. According to the sources in the know, 32nm has some trouble achieving good thermals for the planned Turbo architecture and dynamic clock scaling. The goal is to bring this even further than in 45nm Lynnfields. Once that thermals are in the desired range, Intel will target aggressive clock scaling for its desktop parts [Gulftowns from Xeon 5600 series will be more moderately clocked and fit inside workstation/server TDP’s]. Regardless of when it happens [Q4’09, we would place our bets on November], the upcoming arrival of a sexa-core processor to desktop probably will force the competition to either enter the sexa-core arena on desktop [Phenom II “X6” or rebranded Opteron 1400 series], or stay aside while Intel reaps the positive PR and more importantly, gather developer support.

Note that we are using the proper latin prefix “sexa” for describing a six-core processor, unlike the official line from both Intel and AMD – that will switch to greek and use prefix “hexa” [in that case, dual-core and quad-core would be di-core and tetra-core], afraid of using anything that has “sex” in the name, even though english number six derives from latin’s number “sex”. Then again, we all know how corporations and especially majority of Americans are paranoid about that three letter word. At BSN*, we’ll continue to use the written sequence until 10-cores, after which we expect that all media wilswitch to “XX-core” naming convention anyways.

So there you have it! Answers to questions you never dared ask for reasons you may sound too nerdy…

What’s believed to be the first product shots of the six-core part have been leaked to the web. Likely to be called Core i9, the pictures show off the new chips in a dual-socket motherboard that’s either an existing Xeon-based socket LGA1366 mobo or a next-gen Skulltrail platform. Either way, that’s 12 cores of processing power, and 24 cores with hyperthreading enabled.

According the alleged screen grabs, the engineering sample spied in the photos comes clocked at 2.4GHz courtesy of a 133MHz bus speed and 18X multiplier, along with 12MB of L3 cache.

And here’s the image in question:

Finally, have you test driven the i30 yet?
I just did the other day…
It’s got plenty of compute power too but I’m talking about the i30 from Hyundai… 🙂
I think it will be a while before Intel is up to the i30 generation!!

Any comments on how long that will take given the current development plan? In your life time?