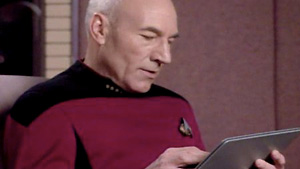 If you think the iPad is an exciting new device set to revolutionise how we work with computers, you’re right.

Except for one thing: it ain’t necessarily NEW…

One interesting characteristic of Star Trek: The Next Generation—one that separated it from the original series and most of the early films—was its widespread use of smooth, flat, touch-based control panels throughout the Enterprise-D. This touch interface was also used for numerous portable devices known as PADDs, or Personal Access Display Devices. These mobile computing terminals bear a striking resemblance to Apple’s iPad—a mobile computing device largely defined by its smooth, flat touchscreen interface.

To understand the thinking that led to the design of the Star Trek PADD, we spoke to some of the people involved in production of ST:TNG (as well as other Star Trek TV series and films), including Michael Okuda, Denise Okuda, and Doug Drexler. All three were involved in various aspects of production art for Star Trek properties, including graphic design, set design, prop design, visual effects, art direction, and more. We also discussed their impressions of the iPad and how eerily similar it is to their vision of 24th century technology, how science fiction often influences technology, and what they believe is the future of human-machine interaction.
From "electronic clipboard" to PADD

The Star Trek films, beginning with 1979’s Star Trek: The Motion Picture, had sizable budgets for set design, props, and special effects. However, the original Star Trek series from the 1960s didn’t have the resources to fill starships with buttons, knobs, and video displays.

According to Michael Okuda, original Star Trek art director Matt Jefferies had practically no budget. "He had to invent an inexpensive, but believable solution," he told Ars. "The spacecraft of the day, such as the Gemini capsules, were jammed full of toggle switches and gauges. If he had had the money to buy those things, the Enterprise would have looked a lot like that."

Because Jefferies was forced by budget restraints to be creative, however, the original Enterprise bridge was relatively sparse and simplistic. "Because he did such a brilliant job visualizing it, I think the original Star Trek still holds up today reasonably well," Okuda said.

Similar budget constraints meant creative solutions were required for ST:TNG as well. "We had a much lower budget than the feature films did," Okuda told Ars. "So, for example, I looked at the production process of making a control panel, and I said, ‘How can I make this as inexpensive as possible?’ Having made those decisions, ‘now what can I do to make it as futuristic as possible?’"

What could be simpler to make than a flat surface with no knobs, buttons, switches, or other details? Okuda designed a user interface dominated large type and sweeping, curved rectangles. The style was first employed in Star Trek IV: The Voyage Home for the Enterprise-A, and came to be referred to as "okudagrams." The graphics could be created on transparent colored sheets very cheaply, though as ST:TNG progressed, control panels increasingly used video panels or added post-production animations.

"The initial motivation for that was in fact cost," Okuda explained. "Doing it purely as a graphic was considerably less expensive than buying electronic components. But very quickly we began to realize—as we figured out how these things would work and how someone would operate them, people would come to me and say, ‘What happens if I need to do this?’ Perhaps it was some action I hadn’t thought of, and we didn’t have a specific control for that. And I realized the proper answer to that was, ‘It’s in the software.’ All the things we needed could be software-definable."

What Okuda realized is that with physical hardware interfaces, each function has to be designed into the interface from the beginning. But by imagining that software could re-configure the interface as needed, the writers were able to imagine any function that needed to advance the plot, and the production artists could create a "software" interface to perform the specific action.

Since the props weren’t real functioning devices, no real code needed to be written. "We were considerably freer to imagine, ‘What if you do this? Or what if you just touched that and it changed into a helm panel?’" Okuda said.

Still, the design of the user interface on the various control panels was influenced by user experience considerations. "What I tried to do was create something that, at a distance, looked like it had a macro-level organization," Okuda told Ars, "and when you got closer, there appeared to be an additional overlay of organization on top of that. The viewer would imagine, looking at it, ‘If I study this close enough, I could figure out how to fly a starship.’"

Avid viewers may remember that officers on the original Star Trek took notes or signed off on orders using what were referred to as "electronic clipboards." These rather bulky-looking (by today’s standards) boxes had a sloped top with a large area for writing with an attached stylus, as well as a few light-up buttons. Lt. Uhura often used one in her role as communications officer.

For ST:TNG and beyond, Starfleet used touchscreen PADDs. The thin, handheld devices used the same interface as the control panels and computers on the Enterprise-D. "The idea was that we wanted to make them sleeker, slimmer, and way more advanced than the electronic clipboards were on the original series," Okuda said.

But PADDs were much more powerful than electronic note pads. "We realized that with the networking capabilities we had postulated for the ship, and given the [hypothetical] flexibility of the software, you should be able to fly the ship from the PADD," Okuda said.

Like the PADD, Apple’s iPad and other iOS devices are designed largely around the idea that the software defines how the device can be used. "Nothing compares to the almost alive interface of the iPad," Doug Drexler told Ars. An ardent reader of science fiction from the age of 10, the iPad’s touch interface was something he had long expected. "I think my attitude was, ‘It’s about time!’," he said.

"I think that anything that has no apparent mechanism yet delivers a big punch is either futuristic or, if you are from the Middle Ages, magic," Drexler explained. "Advanced alien devices on the original Trek series often had no discernible mechanism. So touch interfaces seem like magic. It’s also slightly eerie, as you have the sensation that this thing is aware of you."

Even Okuda was impressed with how natural and fluid the interface of the iPad feels in use. Actions that involved complex post-production effects on a PADD actually seem easy on an iPad, he said. "There are a lot of things that are very easy to do in a prop, but actually very difficult to do in reality," he told Ars. "For example, pinch to zoom—that was relatively difficult to do even as a visual effect. It’s implemented brilliantly on the iPad and the iPhone."

Drexler said that to him, the iPad is "eerily similar" to the PADDs used in Star Trek. "We always felt that the classic Okuda T-bar graphic was malleable, and that you could stretch and rearrange it to suit your task, just like the iPad," he said. "The PADD never had a keyboard as part of its casing, just like the iPad. Its geometry is almost exactly the same—the corner radius, the thickness, and overall rectangular shape."

"It’s uncanny to have a PADD that really works," Drexler said, unlike the non-functional props made for the TV series and later films. "The iPad is the true Star Trek dream," Drexler told Ars.