‘Selfie’ beats bitcoins, lab meat, twerking and a tiny mammal for word of the year

The good news: we’re apparently a little less obsessed with acronyms than we have been in past years. The bad news? It seems we’re still addicted to taking photographs in bathroom mirrors for posting on social networks. According to the Oxford Dictionary, use of the word “selfie” has increased by leaps and bounds over the past year, up some 12,000-percent. That’s enough to earn it the honor of becoming the academic reference book’s word of the year. And, this being the Oxford Dictionary, there’s naturally a nice etymology involved, tracing the word’s usage to a self-reportedly drunken poster on an Australian messageboard who smashed their lip on a flight of stairs. So…congrats? Also on the shortlist: bing-watch, bitcoin, schmeat (synthetic meat, naturally), showrooming, twerk and olinguito, an adorable raccoon relative from Columbia. Don’t worry, you’re all winners in our book. 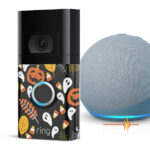 Get your spooky on with Alexa and Ring this year