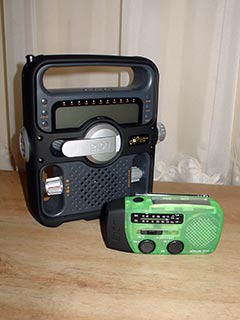 Surviving in an emergency situation is something people rarely think about – let alone plan for. While stockpiling canned foods and building a fall-out shelter is certainly extreme, equipping yourself with some basic survival tools – you know, just in case – might just be a reasonable proposition.

Read on for our take on Eton’s Solarlink FR150 and Microlink FR500 survival crank radios.

A world disaster withstanding, the FR500 and FR150 are actually aimed at the adventurous types whose adventures off the grid can take them from a good time to struggling for survival without a moment’s notice. At 130x45x60mm and weighing in at 230g, the FR150 is very much a hand-held survival radio, fitting comfortably in the hand. In comparison, the 210x195x60mm footprint of the FR500 correctly suggest a greater feature set and increased usefulness in a genuine emergency. 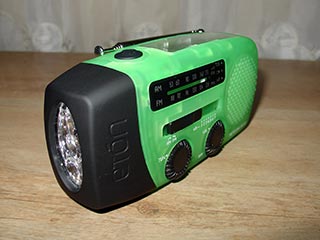 MICROLINK FR150
The FR150 can tune in to both regular AM (520-1710 Khz) and FM (87-108 Khz) radio signals as well as all seven North Oceanic and Atmospheric Administration (NOAA) weather band channels – which as far as we can tell, can only be received on the North American continent. The radio can be listened to via its built in speaker or by plugging in headphones into its standard 3.5mm headphone port. The fold away antenna is telescopic and extends out to 260mm.

The radio’s party trick however, is given away by its robust folding hand crank. When unfolded, the hand crank’s turning radius is about 200mm and its solid build inspires confident cranking: The FR150 is definitely not a cheap knock off you might find at your local market! The sturdy hand crank power generator allows you to not only charge the internal Ni-MH battery – which is user replaceable – but can also be used to recharge depleted cell phone batteries. The only caveat with charging mobile phones is that a cable to match your phone must be purchased from Eton separately.

Beyond the crank power generator, the FR150 can also be powered via USB (mini USB port) as well as via its 20x65mm solar panel.

The FR150s outer casing feels good in the hand and has an ever so slight spongy/grippy feel to it. Its dimensions and design lend itself perfectly for use as a torch, which is of an adequate brightness when used at night. All joins and seams match up evenly and the USB, headphone and cell phone recharging ports are securely covered by a rubber flap.

In our testing, the radio received a strong signal for all local (Australian) stations – both AM and FM – although as hinted at earlier, we received nothing but static on the NOAA weather band channels. From what we can tell, this is normal as this service is only available in North America. The internal speaker is certainly not audiophile grade, but it will do perfectly well in competition with your average portable radio. After all, in an emergency the FR150’s extra features could be the difference between survival and  well, death.

The FR150 employs a slider to change bands and two small dials for tuning and volume respectively. Turning the volume dial all the way to the left turns the radio off. On the top of the radio is a black rubber button which turns the torch on and off. While its primary use is a radio, the unit feels very much like a torch when held in the hand.

When charging a mobile phone, the user manual suggests cranking the handle for 10-15 minutes will deliver approximately one minute of talk time. While we were not able to test the mobile charging – no cable supplied – we did notice that the radio never lost charge during our few weeks with it. With our (initial) enthusiastic cranking and its automatic charging via its solar panel, the radio proved to be always ready for use.

SOLARLINK FR500
The Solarlink FR500 is bigger and has more features but is obviously cut from the same stone as the FR150. The FR500 shares the AM/FM/NOAA weather band reception of its smaller sibling, as well as adding Shortwave (6000-12100 KHz) receiving capabilities. It also has a considerably larger (22x100mm) solar panel, a larger charging crank and a flashing red LED beacon to accompany its larger (4 white LED) flash light. Other upgraded features not present in the FR150 are an alarm clock as well as an emergency siren and a green backlit LCD display. The FR500 also adds another power source with the use of 3 standard AA batteries. This complements the hand crank, USB, solar and internal rechargeable battery. The unit can even be powered via a 5v adapter (not included). There’s nothing quite like being prepared!

Emergency crank power is useful in an emergency but hard work – Fully charging the internal 600mAh rechargeable battery via crank (approximately 3 hours at 120 turns per minute) isn’t practical for every day use. The solar panel however, fully charges the unit in approximately 10-12 hours and at low volume, keeps the radio operating for 5-6 hours.

Unlike the FR150, the FR500 looks at home on a book shelf rather than in the hand, and features a number of silver dials and black buttons. The dials generally work well, although the function dial (lower left hand side) did have a little more play in it than we would’ve liked. The rear of the unit has a battery compartment and two rubber covers protecting a Phone Charging port (USB), DC in (Mini USB), 5V DC in, Headphone port (3.5mm) and an audio in port (3.5mm) safe from the elements. While the FR500 (like the FR150) are not rated as water resistant, they certainly appear to be ruggedized.

Like the FR150, the unit performed well in its AM/FM duties. We attempted to listen in on some shortwave broadcasts, but most were difficult to hear over the static. The few broadcasts we did manage to tune into however, did sound okay and were as audible as you would expect for Shortwave to be. While we liked the unit – and it performed well – we would welcome a simple way to connect a more powerful antenna to the unit – increasing its ultimate usefulness in one of those genuine end of the world scenarios.

The FR500 also shares the grippy plastic material of the smaller unit and despite the one dial we had concerns with, was well built. The hand crank was solid and the siren fairly loud – not ear shattering mind you – but loud enough to broadcast your distress a fair way.

The phone charger also sees a welcome upgrade to a female USB port allowing any standard USB to phone cable to charge your cell phone. Our trusty Samsung D900 charged perfectly with this method. We tried to charge our iPod photo and iPod Classic but were not successful.

CONCLUSION
Both the FR150 and the FR500 are solid devices with features that will definitely assist someone in an emergency. The features of both radios performed as expected and while we were a little disappointed with the shortwave reception on the FR500 – we were generally impressed with not only their usefulness in an emergency, but their competence as everyday radios.

Both the FR150 and FR500 would be invaluable in a genuine emergency and perhaps more importantly for those of us not quite so paranoid, they make for perfectly acceptable every day radios. The FR150 is available direct from Eton for $30US and comes in green, blue, orange and black while the FR500 with its enhanced survival features costs $80US.

For more information on either of these products visit Eton’s website.