Jabra Elite 85t – The sum of all parts 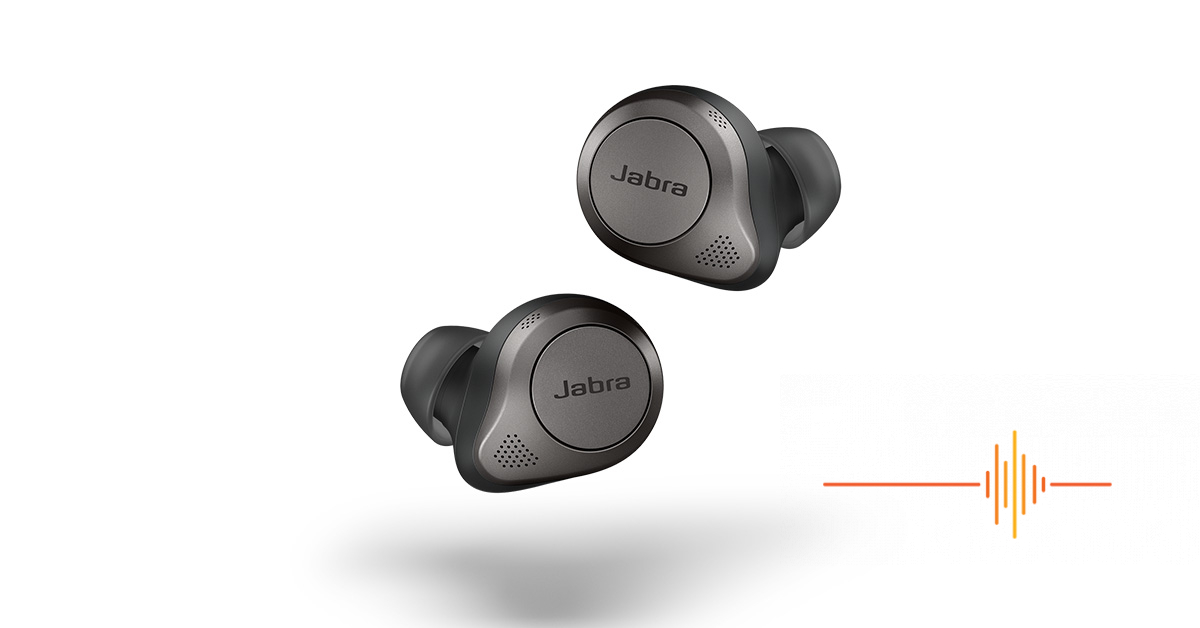 The current flagship earbuds from Jabra is the Elite 85t, announced late in 2020. I have had the pleasure of reviewing the last two generations of the Jabra Elite earbuds, the 65t and 75t. And with thanks to Jabra, I got the hat-trick. 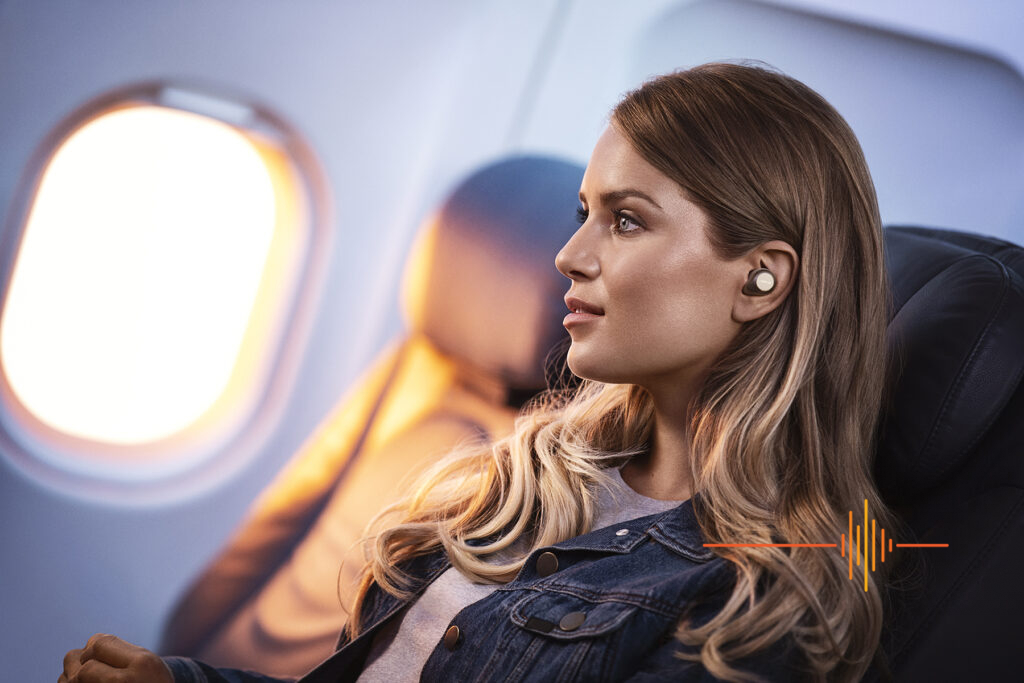 The Jabra Elite 85t looks and feels bigger than the 75t, thanks to the extra hardware packed into the earbuds. Surprisingly there is only a 3.2% change in volume in the charging case size.

The earbuds also have a small size difference on appearance. The extra bulk comes in the depth of the Elite 85t and even then, it is an amazing 1.2mm extra to accommodate the ANC chip in the Elite 85t. The cluster of holes hiding the six-microphones array is significantly finer in the new unit.

The other main change to the appearance is the new oblong-shaped tips instead of the old circular tips.

Holding them in my hands, they feel absolutely top-notch. Solid, nice heft, and beautifully engineered and assembled. 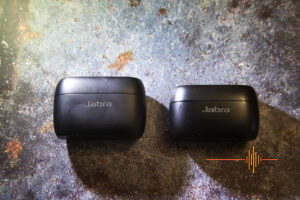 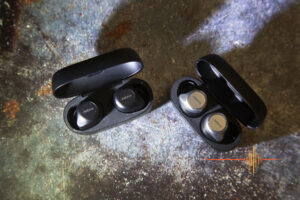 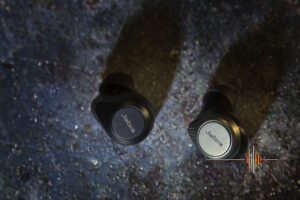 Let’s get straight into what really matters, how does the Elite 85t perform? I really wanted to dive into the ANC features, given that it is the first time Jabra has a dedicated ANC chip in one of their earbuds and I was keen to see how it goes. However I would be remiss if I do not look at the whole package first.

As I noted just before, the ear tips are are an oblong or oval shape. It is designed to fit more naturally and comfortably in the ear canal. The “semi-open” design features pressure relief vents to prevent pressure build-up inside the ear. The silicon EarGels works to create a more secure seal and passive noise cancelling, and they also include an earwax guard to prevent debris from building up and interfering with the performance.

From a fit perspective the Elite 85t did not feel quite as secure as the 75t that I have been using. The older style round tip just feels more secure in ear, however there was certainly no discomfort with the oblong shape of the 85t. That is not to say that they are insecure or falls out easily, it is a perception from a direct comparison.

The ANC feature, is simply outstanding. I was working from home and on a call with Jabra’s PR representative using these earbuds while she was on a train. In my background there is a supersized digger going hard on the land next door along with a constant warning beep going, a b-double with engine running ready to head off with another load of soil. But with ANC turned on, none of this background noise made it onto the call. Even after I brought it to O’s attention, she was unable to pick it up in the background noise.

With just the act of putting the Elite 85t on, I am immediately into my own cocoon and blissfully unaware of people trying to talk to me from across the room. It’s almost comical in the sense that I can see mouths moving but no words are coming out. But what I actually experience is a sense of voice with the content itself being “filtered” for wanting of a better description. There is certainly distinct differences with ANC or HearThrough turned on, versus having it turned off.

If you find the filtering is too much though, the Sounds+ app gives you ability to customise just how much ANC or HearThrough to have. At a glance, Jabra states there are 11 levels of sound for customisation. I was initially confused when the app only allows for 5 levels, until I clued on the wording. It is levels of sound inclusive of ANC, HearThrough and off – 5 levels for the first 2, and the off mode. Got to love marketing.

With the latest firmware update also came with some new and useful features on the Sounds+ App. Aside from performing firmware updates and finding the last known location of the earbuds, it now comes with a number of personalisation features.

MyFit checks how well the earbuds are fitting into your ear canal. A good fit optimises the audio experience, improve ANC and give a feel for deeper bass. It only takes a few seconds to run through the test. Depending on how quickly I jam the earbuds in, it occasionally does prompt me to readjust the fit to get a better seal.

How does MyFit work? It plays a 6.5 seconds multitone to check for sound leakage with the help of the in-ear microphone. Sound leakage detected in either earbud is an indication of a poor fit, and users will be requested to readjust their earbud or change their EarGel size. The process can be repeated until a good fit is achieved.

What is the difference? With the MyFit green tick of good seal, the sound is a little richer, the bass has more punch. Obviously the background noise is better kept at bay as well. When I deliberately went for a poor seal, the music sounded a lot tinnier and of course the base just sounded lame. How would I compare it? Well … let’s say Justice League 2017, versus Zack Snyder’s Justice League 2021.

MySound tailors the equaliser for your individual hearing profiles for each ear. The app runs through a number of tests in order to determine your audio range, and I suppose, your hearing health to a degree. It seems my hearing is still ok, I am just getting old.

MyControls is for button functionality. You can customise for Media, Incoming calls or Outgoing calls. Each earbud can be configured individually and there are three options for bud – single press, double press and triple press. This fixes one of my bugbears with the previous iterations where I lose functionality (e.g. mute) if I am only using one earbud.

In addition to these customisation options, there is also the “Moments” features which allows you to have three preset scenarios – My Moment, Commute and Focus. Consider each of the three Moments as profiles, where you can tune the level of active noise via ANC or HearThrough amongst other options. When the right Moment comes (pun intended), all you need to do is tap to activate the profile you desire.

And finally you can rename your Jabra products. Extremely handy if you are like me and have multiple Jabra devices.

Having the ANC chip and the feature turned on does come with a power penalty. Overall the rated battery life of the Elite 85t is up to 7 hours for music and calls, down from 7.5 hours on the Elite 75t. The battery life with case is up to 24 hours, down from 28 hours. A full charge time has gone up significantly from 140 minutes to 210 minutes.

On paper this looks like a backwards step, but there is a fairly simple explanation for the changes.

The Elite 85t sports a larger battery but it is also driving more hardware.

With ANC turned, battery life averages around 5.5 hours. It is horses for courses but it is a 2 hours penalty.

There is also a quick charge mode where 15 minutes in the case gives you an hour of talk time. 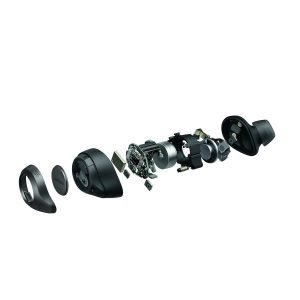 I mainly use the Jabra Elite 85t for voice calls and conferencing. They are easily portable and I can carry them everywhere. Generally the audio comes across warm, with a natural sound that reproducing a fairly vibrant rendition of my voice. At maximum ANC setting though, it can just slightly blunt the sound. It is a victim of the processing, but by dialling that back a notch then you can avoid this issue. It has to be pointed out though, word content was still perfectly understandable.

As for music, the tuning of the Elite 85t is for general listening purposes. The bass is notable as it always has been with the Jabra Elite series. The sound stage is balanced if not particularly exciting. The key phrase is general listening purposes – in between calls, listening to some content, the occasional music for distraction. If you are looking for a full auditorium quality music reproduction, these isn’t the playing field for earbuds.

Initially I went without using MySounds for baseline testing, then I went with my personalised audio profile. I thought I did ok with the MySound test, but having the personalised profile did up the bar a little. Music seems just a little more alive…

Just like the previous iteration, the earbuds snaps into position via magnets making it easy to ensure alignment for charging. They also hold up well to being dropped in the case without the earbuds being dislodged too easily.

The charging case is also Qi-certified, hence you can just drop it onto a wireless charger for the ultimate convenience.

A couple of gripes with the Jabra Elite 85t.

I find it harder to get the Elite 85t earbuds out of the case compared to the 75t. It always takes me longer to get them out and ready to take a call. I eventually worked it out to the design of the 75t allows me to tilt it in the charging cradle better for me to get a grip. The slightly bulkier Elite 85t limits this lateral movement and hence slowd me down.

MySound doesn’t give a report on the hearing profile it sets up for you. It’s either completed and active, or reset to defaults to turn off.

The Jabra Elite 85t is a step up in every way from the previous generations. Jabra has stepped up to the plate and delivered many little and not so little improvements and changes, and together the whole is great than the sum of its parts.

For me, the hardware ANC nails what I need when I am either working from a busy home, or in a busy client site. The overall quality of sound reproduction, minus the background noise is impressive.

Added to that, the customisation and granular controls made possible by Sounds+ means I can get the sound profile I like, and toggle the ANC / HearThrough mode on demand just by a simple tap on the earbuds.

Available in Titanium Black, Black, Copper Black, Grey and Gold Beige, the Jabra Elite 85t has a RRP of $299.00, although it appears to be a bit cheaper on Amazon at the moment. Buying through Amazon helps DigitalReviews so we appreciate you considering making your purchase there.

DRN would like to thanks Jabra for their on-going support.

Connectivity
Connectivity : Bluetooth 5.1
Supported Bluetooth profiles : HSP v1.2 , HFP v1.7, A2DP v1.3, AVRCP v1.6, SPP v1.2
Operating range : Up to 10 m
Paired devices : Up to 8
Multi-connect : Two devices can be connected simultaneously
Auto power on/off : “ON” when earbuds are out of charging case ; “OFF” after 15 minutes without connection or 30 minutes without activity
Auto pause music : Yes, when one earbud is removed from ear