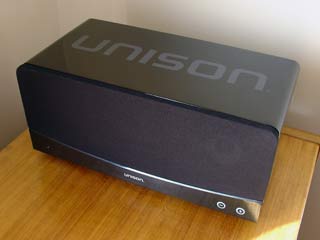 Having never had a Cygnett-Unison product on my desk before, I wasn’t really sure what to expect: Sure, the unit looked nice on the product page, but they always do, don’t they?  And so, it was with some trepidation that I opened the package and first set my eyes upon the Unison B-XT Bluetooth Music System. As I removed the unit from its packaging, trepidation quickly turned to expectation: If this thing produced audio half as good as it looked, I’d unwittingly stumbled upon something quite special.

Read on for more.

FIRST IMPRESSIONS
As I hinted earlier, the B-XT looks fantastic. Finished in shiny piano black, the unit has a just waxed feel to it and oozes style: Even the massive “UNISON” labelling on the unit’s top remains impossibly stylish. The unit is well constructed and the visible seams – of which there are few – fit reasonably well. The removable speaker grille sits perfectly on its four metal pins, with a uniform fit all the way around. In the recessed cavity beneath, two 3” 8w speakers are split by a 4” woofer. These also look the part, with the 3” speakers featuring stylish white cones complete with black ultra-reflective center domes.

On the left hand side of the unit (beneath the speakers/grille) is a small green power LED which is joined by two blue LED lit volume buttons on the right. The two buttons light up while the unit is in operation and flash while the unit is awaiting a Bluetooth audio stream. 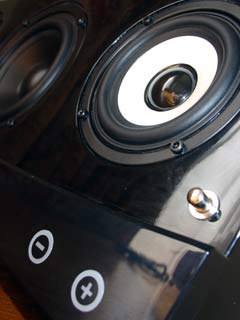 The rear of the unit has a 3.5mm Line In port, a standard three pin power port and of course, the unit’s power switch. The unit also has a small power selector switch which allows the unit to be operated at either 110 and 230V. 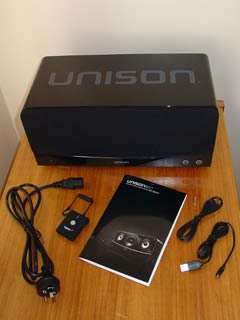 Along with the unit itself, the B-XT Bluetooth Music System comes with a standard three prong power cable (naturally, our review unit came with an Australian plug end), dual male 3.5mm audio cable and a brief manual. Also included in the box is a Cygnett Bluetooth adapter. This adapter allows you to turn any device with a 3.5mm output into a Bluetooth audio streamer. A purpose built USB cable for charging the adapter is also included.

Over the past few weeks, the Unison unit has been a regular part of my daily routine; playing music from my iPod classic, laptop and a D900 mobile telephone. While I connected the unit via cable on occasion, I predominantly used Bluetooth (and the included Cygnett Bluetooth adapter where necessary) to stream audio to the B-XT.  Syncing the B-XT with my Samsung D-900 mobile phone was as easy as it should be. Once paired via the usual process, the phone effectively streamed audio to the B-XT without any problems whatsoever. Using the included Bluetooth adapter was even easier: After plugging the adapter into its host and turning both units on, the B-XT automatically locked onto the stream and began playing within seconds. Too easy.

While walls seemed to impede the Bluetooth, when in line of sight, we found both the included adapter (and mobile phone) to be reliable up to around 8-9 metres. When we attempted to space the devices further apart the audio cut out cleanly and without fanfare. Interestingly, as soon as the distance between B-XT and adapter/phone was reduced, the B-XT automatically re-acquired the signal and continued playing as it did before. 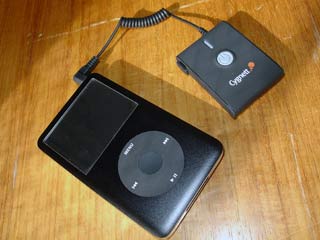 Having just picked up an Apple iPhone 3G I was keen to try it out on the B-XT. Unfortunately – due to Apple’s ridiculous lack of A2DP support – I was unable to stream music from my new iPhone, despite its built in Bluetooth functionality. Using the Cygnett adapter, however, I was able to circumvent this restriction without issue.

The included Bluetooth adapter has a claimed playback of 7.5 hours and while I didn’t sit and time the unit, I found the adapter remained charged for many days of on/off usage. The adapter requires 2 hours charging time to bring it back to full capacity.

No matter how good a speaker looks, or how easy it is to use, a speaker system must be judged primarily on how it sounds. And to this end the B-XT once again comes through. For its price, the unit produces a nice even sound. The highs are clear and the unit’s 4” woofer provides a decent amount of bass. The bass is not earth shattering by any means, but it adequately adds presence to that produced by the two main speakers.

The mid range was a little muddy – depending on how picky I am being – but perfectly acceptable for speakers in this price bracket. I enjoy listening to music and in regular listening sessions the B-XT made for a great speaker to have on in the background as well as cranked up for those particularly rocking tunes.

While the audio quality was good, the most impressive thing about the B-XT’s performance was its loudness. I have listened to a number of similar units and most are unable to amplify the sound to any great level. The B-XT managed to fill my rather large test environment with sound and even when turned right up, maintaining an acceptable level of clarity. 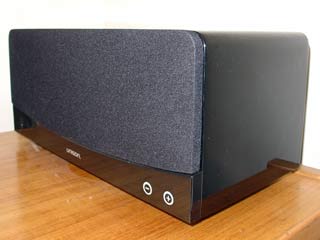 The B-XT Bluetooth Music System looks great, sounds great and is a cinch to use. I  really liked the ease with which the unit connected to devices. The included bluetooth adapter worked flawlessly and connecting the B-XT with A2DP mobile phones was  exactly what it should be: effortless. The unit looks great – I really can’t stress this enough – and its size, while not small, is smaller than most all-in-one units I have seen. The sound the B-XT produces is good for this price range and when coupled with its decent amplification and looks, is well worth auditioning should you be looking for an all-in-one Bluetooth Music System.

The B-XT Bluetooth Music System is available from select outlets for $299, with a cheaper sister unit (I-XT) available for those who do not require Bluetooth functionality.

For more information, including where to buy these units, please visit Cygnett/Unison’s website.