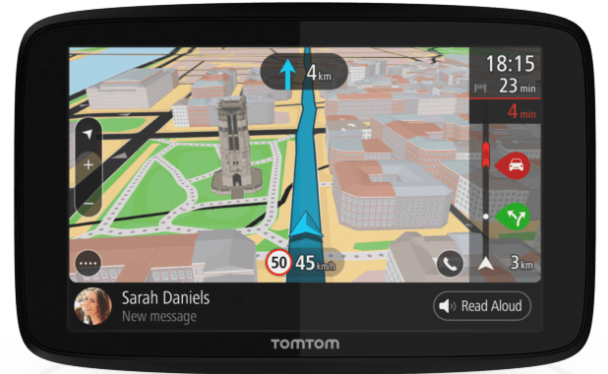 We know that TomTom has a reputation of bringing out great Sat Navs even before Google Maps took a fair slice out of the navigation market but the GO 620 notches up the usefulness of having a TomTom in your car quite a bit.

We’ve all been guilty of accessing our phone while driving: a quick glance to see who’s texting us, pressing the answer button or initiating a call. Distractions galore which can be fatal. No wonder that in Australia police have had enough of attending crash sites where the use of mobile phones have been a contributing or the main factor. I know as I have two family members who are in the police force…

So TomTom has found a way to not only be navigating us safely to our destination but also still be in communication legally with the outside world.

First a bit about getting to know this latest and most advanced model of the TomTom GO range.
The 620 – as indicated by the first number – has a 6 inch screen.
The resolution of this touchscreen is 480×272. That seems low by today’s phone standards but is actually quite OK for viewing the unit when positioned on your windscreen. For me, the 6 inch unit is perfect. For others a 5” screen would be ideal and in that case the GO 520 is just the ticket.

Taking it out of the box, the 620 impresses with its built quality: there’s nothing flimsy about it. Sturdy, even a tad heavy, yet elegant. It comes with a standard windscreen suction mount but vent or dash mounts are available too. The suction mount is rock solid and the active magnetic clip is the best connection I’ve come across. Easy to take off and clip on so that you can take it with you or hide it in the car when parked.

It has a small battery for using it on its own which lasts about an hour. That’s enough for just fiddling around with it and getting it set up but not really useful beyond that.

Talking about setup: first thing is always to charge it up whilst downloading the updates and maps.
Setup is really user friendly but updating will take at least 30 minutes for the initial download. Just choose one area, like Australia or NZ, even though you have lifetime access to maps and updates of the whole world, including traffic updates AND speed camera notifications (not that we ever would speed, of course… but hey!). Note that updating is not via a PC (like yesteryear) but through Wi-Fi.

The real time traffic updates come through the Bluetooth connection with your phone (which should be safely out of reach whilst driving!) Of course, there’s an app that goes along with the GO series, called MyDrive so that you can plan your route even before you hop in the car. Very efficient indeed.

However, any calls can be answered and texts read aloud by voice command. Siri and Google Now play nice with these TomToms. There’s also a certain amount of learning your driving habits! So it might pick up on your regular destinations… Yes, that might include your Friday night pub crawls too!

We’ve done well over a 1000 kms so far which went well, apart from the initial 30 mins when the GPS connection dropped out frequently.
The big screen is rock steady on either of the two mounts tested. I find line-of-sight mounting preferable over a central dash location and these mounts allow you to find that sweet spot. 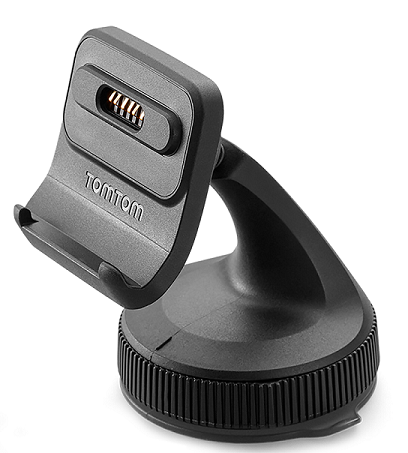 The GO 620 has a very simple and intuitive interface in landscape mode only. So they’ve used the area on the right of the screen for their Route Bar which indicates the whole route with highlights, stops and distance or time to go. It also indicates delays through roadworks, for instance.

The maps are good but not as detailed as Google Maps. Actually, for just driving it’s better to have rather simple maps without distracting you with too much detail. The big cities have 3D rendering of buildings which is quite handy to identify where you are.

Very useful indeed is to know what the actual speed limit is for the stretch of road that you’re on. That’s what I have been missing when using Google Maps. As always, the actual road signs will be the ones to obey as several times a speed limit was displayed 10 kms higher or lower than actual. Even on roads where that speed limit has been the same for years…

Speed camera warning doesn’t work if no destination is entered.
Finally, call quality is reasonable but not great. It’s always a challenge to get good call reception in a moving vehicle with road noise adding to the challenge. 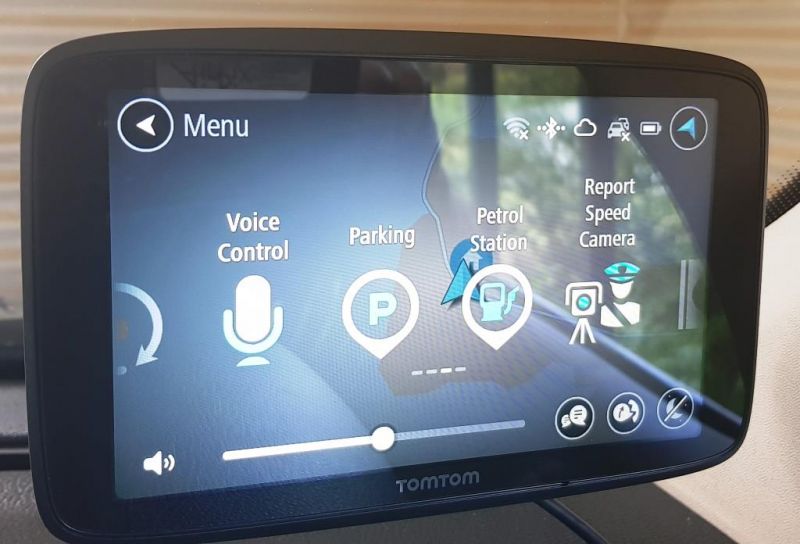 It’s obvious that most modern vehicles have Bluetooth built in and the same with on-board navigation systems. However, there are still millions of cars in Australia that could benefit from having a portable sat nav, particularly one that allows you to handle calls and texts legally.
Case in point: I still have a Territory Ghia from 2009, a car with all the technology “fruit” that was available then. Yet without Bluetooth or navigation capabilities.

Even if cars have a navigation screen does it have the latest maps or traffic updates? Does it warn about speed cameras? If it has that capability, how much do you have to pay to keep it updated?

You’ll quickly see that the AUD349 for a GO 620 (or less for a GO 520) is pretty good value. Particularly if it can help you prevent getting a hefty fine (and demerit points!) for using your phone.

The beanbag dash mount allows you to place your TomTom anywhere on the dash with the windscreen mount that comes with the unit. There was one small problem: the active mount’s orientation needs to be twisted around so that the screen is not upside down. In my case the windscreen mount was very difficult to twist around in its socket. For the 50 bucks extra for the beanbag mount, I’d say try to make it work with just finding a good spot on the windscreen rather than the dash…

Another thought for if your car already has navigation: as mentioned before, I find a windscreen mounted screen that is more in line of sight with looking straight ahead less distracting than having to look down to a centrally located screen. 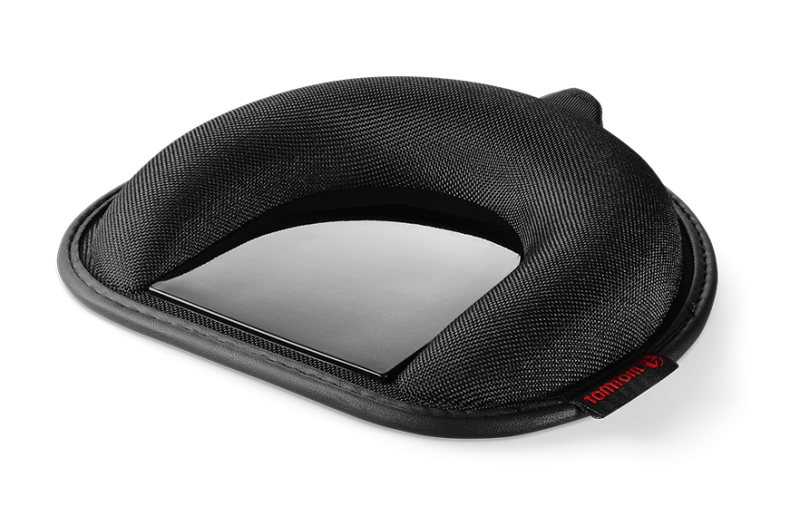 Just a couple of suggestions for next year’s model:
Make speed camera notifications work even if no destination is given (like driving around in your own town).

Please update the speed limits to reflect the actual ones as much as possible.

Searching for a destination: search results for an address come back with a dozen suggestions but not the one that is closest. Make the search result a bit more intelligent by eliminating all the foreign countries for a start and suggest the closest ones first. This should be easy to implement and will get us on the way much quicker.

Voice command can be a bit hit and miss, certainly in the beginning.

The TomTom GO 620 is an excellently built sat nav with full smartphone integration for handling calls and texts. It will save time and money. Time by allowing you to navigate efficiently with timely traffic updates and money by allowing you to use your smartphone legally and safely, not having to worry about costly fines and demerit points on your license.