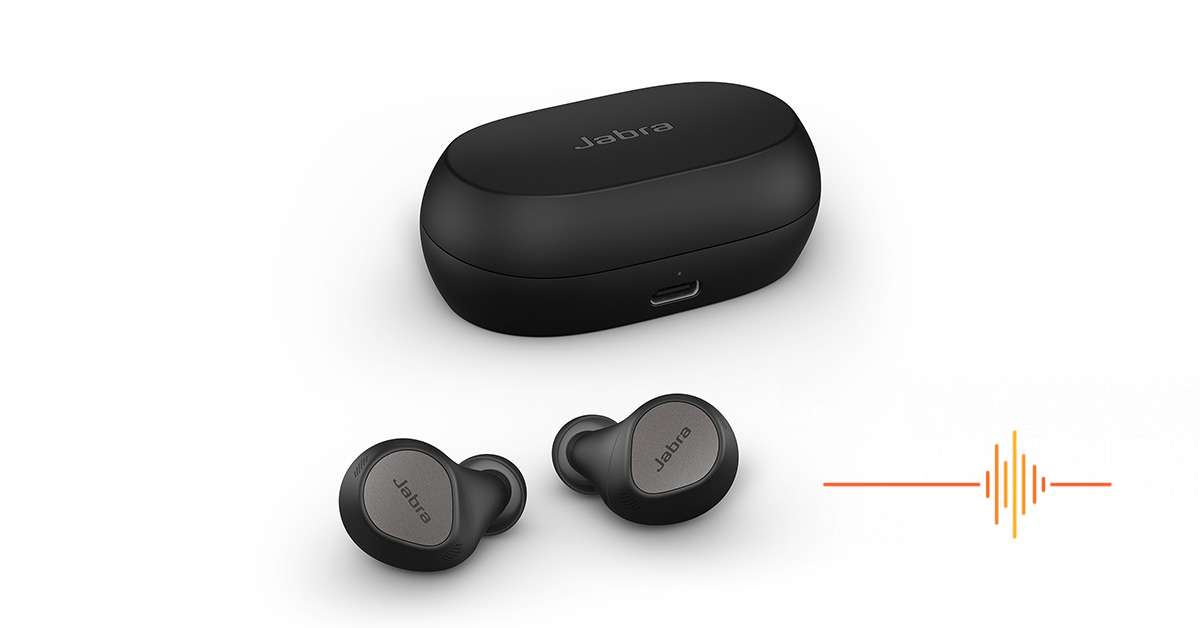 Jabra recently launched their seventh generation true wireless line-up, with the latest and greatest technology for the ultimate call clarity. We got our hands on the Elite 7 Pro and was eager to take it for a spin. I was particularly keen to see how the product line has evolved, having tested and used the Elite 65t, Elite 75t and Elite 85t extensively. 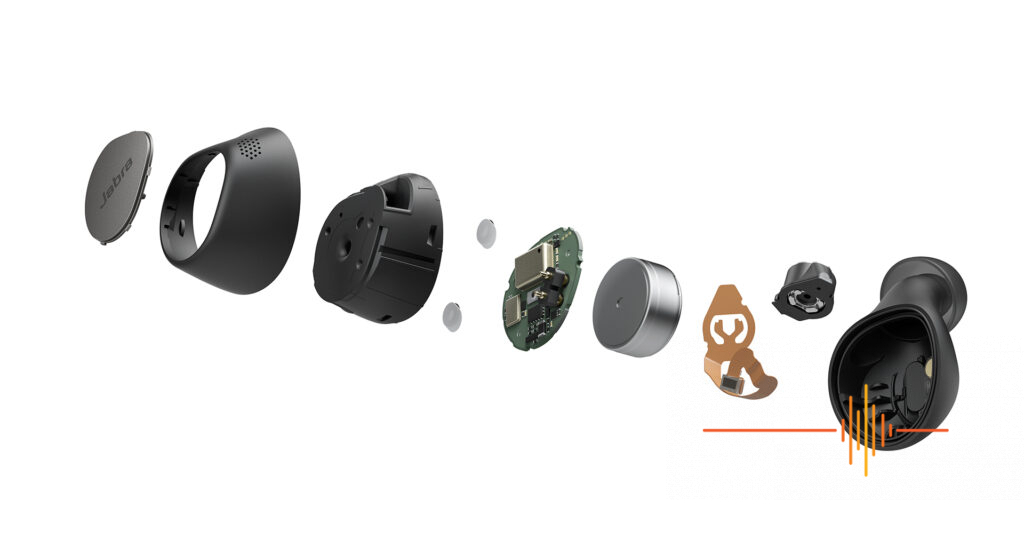 Jabra claims a reinvention of the wireless line-up, pushing boundaries and breaking out of the existing mould, and Jabra has done it for call technology, in-ear fit, audio experience and design.

Using the Jabra Elite 75t as the baseline for size, the Elite 85t had a modest bump up due to the larger drivers. The Elite Pro 7 however, went the other way and is 16 percent smaller, making them Jabra’s smallest earbuds to date. The charging case has also seen a reduction in size being quite a bit squatter and slightly deeper. Overall the package has a smaller footprint making it more convenient to carry around.

I had a gripe when I was using the Elite 85t, that I find it hard to get them out of the case. This is definitely not the case with the Elite Pro 7. The revamped designed charging case gives plenty of surface area to grab the ear buds out securely. 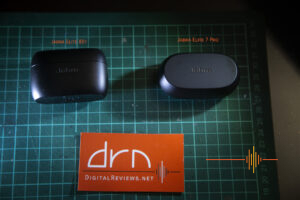 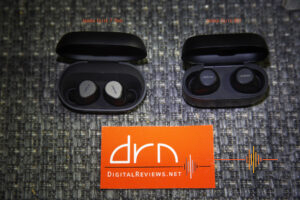 The Jabra Sounds+ app is a permanent feature on my phone, given the sheer amount of Jabra products I review and use. It is essential to get the most out of your Jabra product with regular firmware updates and ability to customise the sound based on your personal hearing profile.

The pairing process is a breeze. Jabra has not deviated from the tried and true, and there are simple voice prompts to guide you if you need the help.

Editor note: It seems I initially tested pre-production models of the Jabra Elite 7 Pro, which had some connection and sound issues. If someone complains about your audio whilst using the Elite 7 Pro, I suggest a quick follow up with Jabra. I am documenting the issues I had during testing here for reference under the heading “pre-production unit issues”.

In between my initial review unit and the final production unit, the Sounds+ app has changed from a mandatory configuration of ANC to optional. I updated the apps on my phone just a few hours before I received my retail unit for testing. Logic says that Jabra changed this requirement in-app rather than on the unit. This change from mandatory setup of ANC is a positive move as it mean you can immediately start using the Elite 7 Pro, and deal with the ANC configuration later when you are in a more appropriate (noisy) environment.

I personally found the changes in the ANC wizard to be subtle and I had to redo it a few times in different environments to really get it set properly. I think Jabra could have made the interface here a little more intuitive by labelling the slider in the ANC controls to show which direction increases or decreases the ANC suppression. In hindsight the vertical orientation of the slider bar should have been a no-brainer, so I am just going to blame COVID isolation brain on this one.

Both the MyFit and MySound features are still present. Both are handy to step through to set up your earbuds fully. MyFit only takes seconds to do and checks how well each buds fits into your ear.  The MySound feature builds a sound profile tailored to your hearing. Unlike the ANC, you do want to do this in a quiet room. 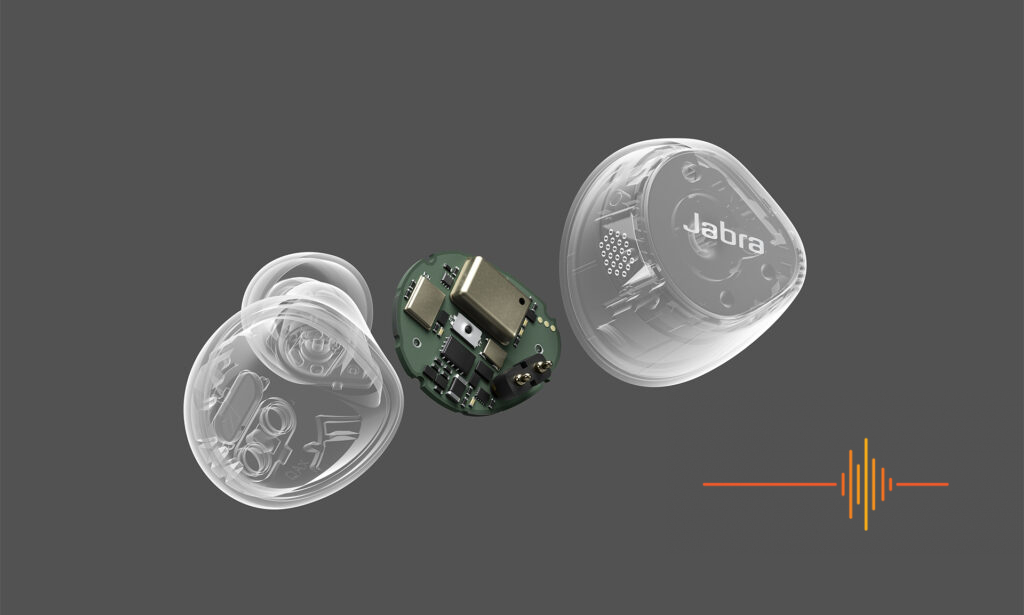 I regularly test audio gear with Ginger, my fellow editor-in-crime on DRN. Whilst the two preproduction units I had originally tested left a lot to be desired, he was astounded at the audio quality of the retail unit. The difference was night and day and without doubt I was just unlucky to have received some duds for the initial tests.

In his words, I came across as though I was talking directly into my phone without the medium of using earbuds. The audio reproduction was faithful, exceedingly clear and distortion free.

All the new technology such as the Jabra MultiSensor Voice technology and Voice Pick-Up (VPU) sensors really seems to work really well in combination with the Jabra algorithms to detect the types of background noises. There is also bone conduction technology in play and Jabra does the black magic in the background. However it is done, it seems to work pretty well … until my toddler comes barging in yelling hello to all and sundry while I am trying to talk. There is no suppressing that!

That addresses the call quality, so how does music playback sound?

The short answer is acceptable. The Elite 7 Pro is not going to satisfy an audiophile, but by and large it should keep the masses reasonably happy. Out of the box the earbuds makes most genres sound pretty good. With the Sounds+ app you can use the visual equaliser to tune the sound a bit more to your liking.

Overall the audio can do with a little boost to the bass and the mids. There is a little sweet spot for me Ed Sheeran’s latest album with a bit of liveliness and helping my productivity in writing up this review. 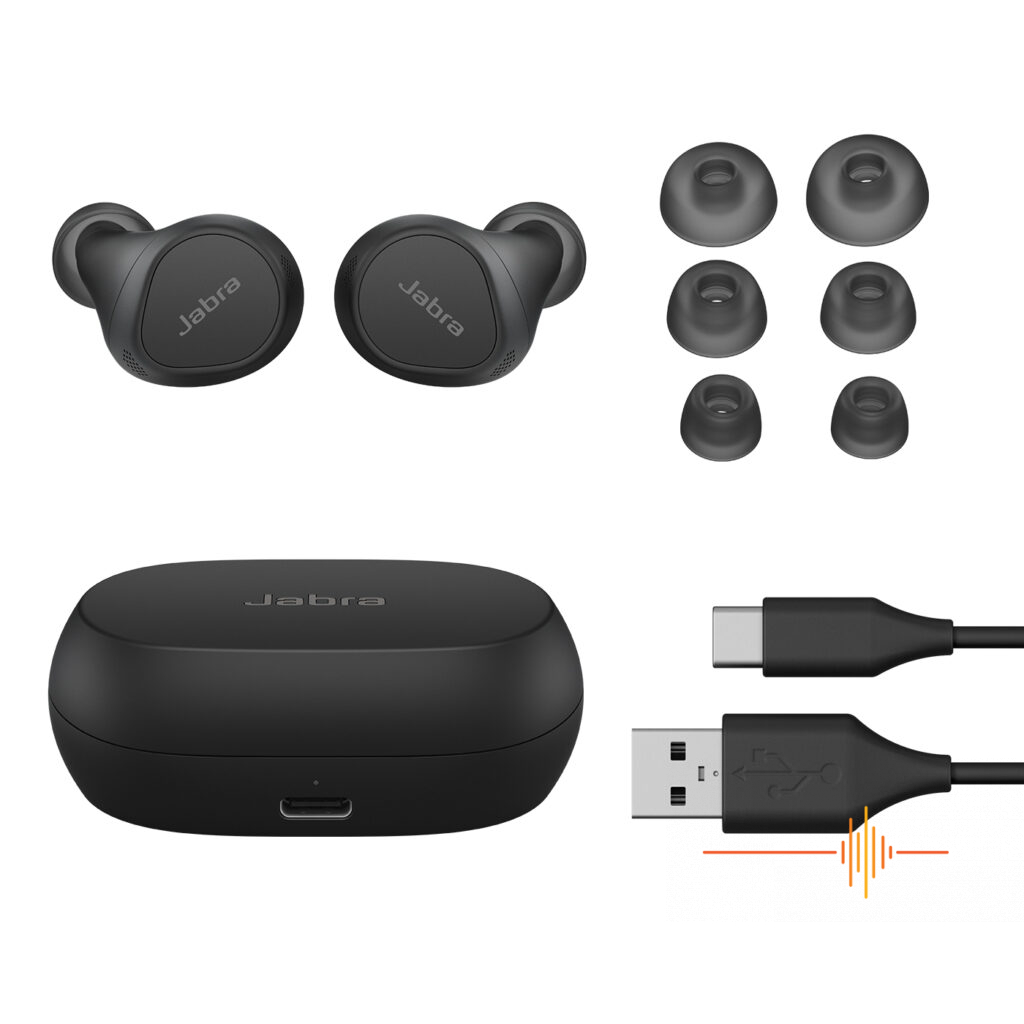 Jabra claims 8 hours of music play with ANC on and up to 30 hours of battery life with case charging. With the work from home and wireless charging, I have never even come close to running out of juice.

It is a significant step up from the Elite 85t where a single charge with ANC on will net you 5.5 hours of play time only.

The Elite 7 Pro also comes with fast charging that gives 1.2 hours of juice in just 5 minutes.

The Elite 7 Pro comes with Alexa built-in, Siri, and Google Assistant (Android only) which can be configured via the Sounds+ app.

Further the app has MyControl, which gives you ability to customise controls for media, incoming calls and active calls. For each of the three categories you can configure for single press, double press and triple press, for each bud separately.

One feature I really like is the ability to use either bud in mono mode, or both for stereo. It was incredibly convenient to be able to grab the closest bud and jam it into my ear to take a call, then if I wanted to, pick up the second one and have the sound quickly kick in on both sides. There was no issues popping one bud out to talk to someone, or pop back into the case to charge. There were also no issues with swapping the buds either with the audio carrying on regardless.

The issues I had pulling the Elite 85t out of the charging case has been mitigated with the new design. However with the Elite 7 Pro, the issue shifted over to opening the case itself. The material is smooth with just the thin joint where the lid meets the case. I am constantly fumbling trying to open the case only to have my fingers slipping off. Over time I have learned to jam a fingernail into the gap to make my life easier.

I was going to say that the Sounds+ does not seem to remember whether I have set ANC or HearThrough on, but this isn’t always the case. It sometimes remembers, and sometimes does not.

Jabra has not enabled multiconnect on the Elite 7 Pro at launch, and is it expected to come with a firmware update in January 2022. A little disappointing as the previous generations all had this feature on launch but I can live with that for now.

If you encountered these issues with your Elite 7 Pro, get in touch with Jabra pronto.

I dove into the deep end with the Elite 7 Pro, as I have done with all the other predecessors. Unfortunately this time it did not end so well and I had to disconnect from them to continue with a rather important call so everyone can hear me. After a few trial runs with varying levels of ANC set, the consensus was that I was largely unintelligible which was disappointing. A quick touch base with Jabra indicated that I had a dud unit on hand so this was promptly replaced.

The second unit fared little better initially, and I had to work playing with the settings to see if I could get the sound quality to improve. Most people gave the feedback that my voice was heavily clipped and they had problems picking up the remnants of what came through to understand me. Strangely enough the quality varied from call to call, and even during a call where I would go from ok to terrible and it sounds like I have a finger rubbing over the microphones.

It was a little frustrating given the excellent previous experiences I have had. I tried it out with a Pixel 5 running Android 11, and subsequently on Android 12 when it became available. I also tried it with a Pixel 6 Pro on Android 12. It was hard to pin down the issue when some calls were flawless and others were trash.

After extensive testing with turning ANC, HearThrough turned on and off and set to different levels, I eventually stumbled on a possible workaround.

When you pop the earbuds back in, the Sounds+ app redetects the connection and more importantly, reapplies the device configuration. That can happen whilst you are still on a call, and somehow it can magically clear up the really poor audio quality and people can hear me perfectly. I tried this a few times and it seems to do the trick.

The odd part is, the Sounds+ does not always drop the connection straight away. I tested and tested this when I have audio playing and I can’t seem to find a predictable sequence for it.

Of course, all of this really is a bit of a moot point, as all these issues have been resolved since I received the retail unit. But, again, if you come across this, get in touch with Jabra.

As I said at the start, this is the fourth consecutive iteration of the wireless earbuds that I have reviewed and used from Jabra. Once I had the final retail unit on hand and testing them, these are an impressive upgrade from the previous generations.

All the new technology Jabra has put in makes these a premium business tool, and I am entirely comfortable using them for all my calls.

If you are mainly using it for music then the Jabra Elite 7 Pro are excellent, lightweight with battery life to last you through a hectic day and more.

The Jabra Elite 7 Pro are available from Jabra and other major retailers for AUD$299 in Black, Gold Beige or Titanium Black, with the option of a wireless charging case for an extra AUD$50.

DRN would like to thank Jabra for their continued support, and apologies for the grief I caused because of the issues I encountered.

Music time total (earbuds and charging case): Up to 30 hours
Music time (earbuds): Up to 8 hours
Talk time: Up to 6 hours
Corded charging: USB-C
Sleep mode: Yes
Wireless charging: Yes
Charging time: Up to 150 minutes
Fast charge: 5 minutes will give up to 1 hour
Battery level after 30 min of charging: Up to 50%
Standby time: Up to 292 Days
Battery type: Rechargeable lithium-ion battery