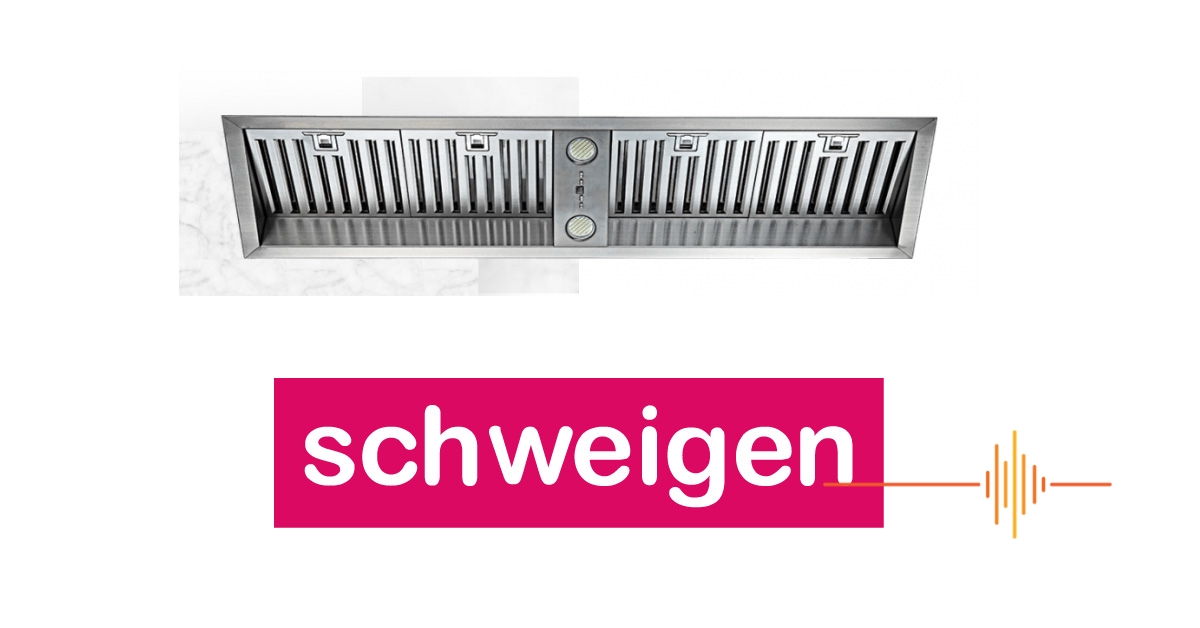 If you had to rate the most annoying sounds to be found in households today one of them certainly would be the noise from a rangehood sucking away smells, vapours and smoke from the cooking on the stove.

Does it have to be this way?

Not when you install a Schweigen Silent Rangehood.

If you have a quiet moment to read this review, be warned: you might want to get one!

Schweigen sounds German. In fact, it literally means to “remain silent”.
Not a bad name, given the German engineering that went into silencing the most important part of the Schweigen rangehood: the Isodrive motor with its in-built fan.

But Schweigen is actually an Aussie company!
So that’s a good start but product parentage is not everything.
How does the Silent Rangehood stack up in use? Truly silent? Easy to install in a variety of kitchen environments? Value for money?

Let’s see how it went for us as a typical user from installation to enjoying the conversations while cooking in our open kitchen.

First a bit about what makes a typical rangehood so noisy.

As a pilot I know that there are 3 things that make a lot of noise: the engine, the propeller and the wind speed of hundreds of kilometres per hour.
Of these, the propeller is the loudest with the tips of some high performance props reaching almost supersonic speeds!

It’s no different in the kitchen: you’re less than a metre away from a motor that drives a noisy fan and that mini propeller generates airflow.

What happens when you put some distance between these noise generators and yourself?
Like, not having them in your kitchen and not even in your house!

What a brilliant idea: put the motor and fan in a weatherproof housing on your roof or attached to an outside wall. Connect the filters with a long flexible ducting hose and put an S bend in it to minimise airflow noise and Voila! This is the Eureka moment the Schweigen team came up with.

We already knew that this approach works extremely well. Before we installed ours we had experienced that lack of noise in other people’s homes where one person said that the only time I realise the fan is still on is when I go outside!

Which made me think: if you forget to switch it off how much energy would you waste!
Well, that’s where the Timer button comes in: press it when you’re done with cooking and it switches off after 15 minutes.
And in case you forget that too: these Isodrives are very energy efficient. Generally, they use about a third of normal rangehood motors of the same power. And they have a 10 year warranty for further peace of mind.

Talking about warranty: The filters (dishwasher safe, of course) and the LED lights have a lifetime warranty.

We had chosen an Undermount solution for our kitchen. You can see why when you look at the picture below.

We had a medium-sized oven in that alcove before we graduated to a Falcon stove which is about 110cm wide.
The rangehood we had was a simple Electrolux 3 speed unit that was inefficient for our style of cooking and very noisy.

Ideally, you should have a rangehood that covers the width of your oven. In our situation we went a bit wider as we often do some heavy cooking in a fryer next to the stove.

Your kitchen layout may need an island rangehood or a wall mounted solution. Schweigen has about a half dozen style options which you can pair with 3 main motor choices, depending on your cooking type (light, moderate or heavy cooking).

We chose the widest Undermount Rangehood (120cm) with the biggest motor for our cooking: the Isodrive SP 1600.

Official RRP of this unit is AUD3370 but you’ll find that most stores are willing to discount a fair bit.

Schweigen has a team of professional installers all over the country and highly recommends that you have them install the unit.
But if you live beyond the black stump in Ruralania or even near the City of Albany in Western Australia, you’d have to find other qualified tradies who can come out and do the install.
Mind you, it is not rocket science as the installation is fairly simple, the instructions are clear and everything comes in the box.

Everything?
All installation environments are different of course but a couple of things are left out that you or the installer has to source.
The main item to get is a Roof Seal Kit, like Dektite, as well as a couple of straps to support the Flexi Duct against a truss.

The actual rangehood unit is lightweight and easy to install. It really helps to have the motor as a separate unit which can be installed on the roof, under an eave or on a wall.

The rangehood came in its own box, securely packaged with foam all around. The motor with flexiduct and other accessories was delivered in another box. It’s good to see from the packaging and the workmanship that has gone into making these products that the company is pretty proud of their products.

The first thing they recommend is to make sure everything just works right out of the box. So we hooked up the Isodrive to the rangehood and plugged in the unit.
Silence. The lights worked fine but the fan was dead quiet.

It’s supposed to be that way when the motor is installed on the roof but not like this. What’s more: there was what seemed like an error code on the display: F0.
I know that this is a common error code in some whitegoods products so I looked up in the manuals what this could be.

Silly me: when I played around with the fan settings I noticed that the “code” changed to F1 and all the way up to F5… So this is just to indicate the fan levels!
The motor is very quiet on the lowest settings, even right there and me being a metre away.

What was a nice surprise is that the rangehood comes with a little remote control that duplicates everything you can do while reaching out over a hot stove.
Not only very handy but very safe!

We had a challenging installation situation in a narrow brick and tile alcove. There wasn’t much room to create an S bend in the flexiduct so it helps if you have someone who can make it work so that it also looks good.

This is the result: nicely hidden and quietly doing its work…

IMPROVEMENTS Suggested for the Model UM-12UMSP

For some reason this model doesn’t have the usual control panel close to the front, facing you.
Instead, it splits up the unit with 2 filters on the left and 2 on the right.
Looks OK but is very awkward to work with: the 2 digit display, indicating fan settings is sideways and hard to see. You need to be right over the (hot) stove and twist your head sideways…
In real life you just go by noise levels to know what setting it is. 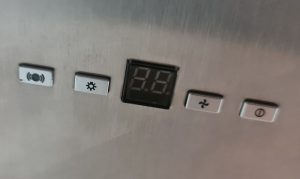 Because of this layout the 2 very bright LEDs don’t illuminate the whole working area evenly.
We would like to see different light levels as well.

Finally, the buttons are tiny and often not very responsive. In fact, having the remote control was often the saving grace.
So we contacted Schweigen support and they quickly organised a replacement control panel.
From perusing other user experiences we noticed that we were not unique in needing a replacement.
In one way it was good to check out their support but on the other hand we wish it were not necessary for such a high ticket item…

We’ve been very happy with the Schweigen UM-12UMSP as far as reduction in overall noise levels.
In optimum installation scenarios it’s barely audible.

It looks great even for a hardly visible Undermount model.

Product quality is good, despite some hiccups with the control panel. Support is good too.

It’s not an inexpensive rangehood at over 3 grand. But we believe it’s a good investment so we can recommend it if you want some peace and quiet in your kitchen!

Do visit your local whitegoods store, like Harvey Norman or Retravision, where they have several Schweigen models on display.

Pick up the big Schweigen brochure which shows you all the models, styles and options plus various schematics for your planning.

Next, if you live in a metro area you can visit one of their 3 showrooms, sample some food and see firsthand what a difference a Silent Rangehood can make in your kitchen.