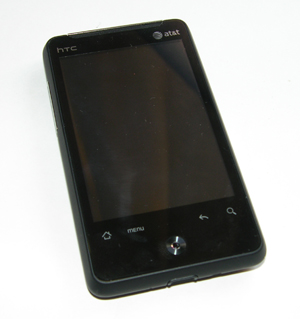 The HTC Aria is AT&T’s answer to Android calling following the Motorola Backflip. This is essentially a mid range smartphone that aims to populate AT&T’s portfolio with a better Android offering that I’m sure others were waiting for. Let’s have a look at the new HTC Aria. 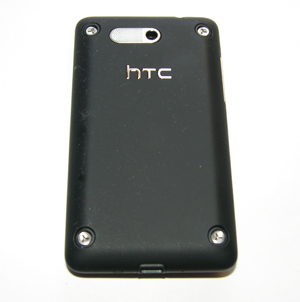 There are minimal physical buttons on the phone.  There are the typical up and down volume button on the left side of the phone, there is a power button on top, and there is a main button at bottom front (like an iPhone).  While the main button at the bottom of the phone may seem just like the iPhone, don’t go thinking it will bring you to the home screen, because it doesn’t. There are also some touch sensitive buttons lined up in the front which help to navigate the interface easier like a ‘home’, ‘menu, ‘back’ and ‘search’ button.

In order to access the battery compartment in the back, you actually have to bend the two top corners a bit in order to remove the back cover.  The back cover actually covers the entire back area as well as the edges of the phone, so you have to pry it a bit to access it.  It’s a bit nice to see the yellow interior of the phone.  In addition to the battery, you will also be able to insert your SIM card as well as a micro SD card. 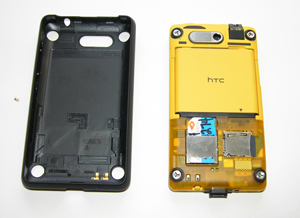 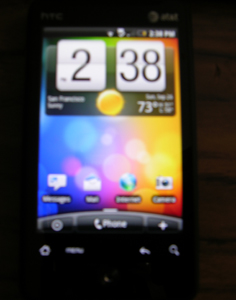 While the display of the phone is a bit smaller compared with other smart phones these days, I didn’t feel limited at all.  The screen is vivid and bright.  While it certainly doesn’t compare to something like the retina display of the iPhone or the high contrast screen of the Samsung Captivate, the HTC Aria is definitely more than adequate and bright.

The only thing that I think could be improved is the speaker on the phone.  While it is just ok for listening to music and video, the sound is a bit tinny and hollow.  A lot of the lower and mid range sounds are lacking.  Also, because the speaker is outputting sound from the speaker on the other side of the display, it seems to lose some fidelity. 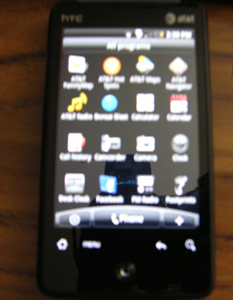 This phone has a built in 5 Megapixel camera.  But it was a bit surprising to me that this phone had no flash.  Therefore, it can be difficult to take shots in low light.  But if you do have plenty of light the camera can take quite good pictures.

Performance
The phone has 600Mhz Qualcomm processor with 384 Megabytes of internal RAM.  The phone generally feels snappy.  The interface is fairly fluid in movement, and scrolling the icons within the application list was pretty smooth. When browsing websites with heavy graphics was when I noticed some jitterness when moving around a page, but it by no means disrupts the web browsing experience.

I would say call quality is above average.  I could hear individuals on the other side of the line clearly and there was adequate volume.  The maximum volume capability of headset of the phone could  be a bit louder to give some room for further volume if needed.

Battery life is about what I expected.  I was able to just reach the advertised talk time of 6 hours with 5 hours and 52 minutes.  With about an hour of web browsing as well as making use of the wifi for another hour, the phone pretty much lasted about a day before I had to charge the phone again.

This phone is using version 2.1 of the Android operating system coupled with Flash lite.  I think this phone will shine even further if HTC provides an upgrade to Android 2.2 (Froyo).

Conclusion
The HTC Aria is a great compact smartphone.  The moment you hold this phone in your hold, you will realize how solid and beautul this phone is.  It is available at AT&T for $129.99 with a 2 year contract and a data plan.  When comparing this phone with similarly priced phones, this phone is competitively priced.  There is the Sony Xperia X10 for $149.99, but it’s biggest flaw is that it’s still running the older Android 1.6 operating system software.  On the other hand, there is a Palm Pre Plus and an iPhone 3GS 8GB for $99.99.  If you are looking for your first Android phone, but don’t want to break the bank, this is the phone for you.