Here is a question for you: I have what is arguably the best Smartphone available, the HTC HD2, and yet, I was quite keen to acquire a phone from the opposite end of the spectrum: the Just5. This is one of the phones that are particularly aimed at the so-called senior market — yes, the people that need big buttons, big display letters, big sound.

I don’t quite qualify yet to be a senior but I do appreciate where this phone is coming from. As much as I love technology and an all singin’, dancin’ Smartphone, don’t underestimate the need for simplicity in the market. And it is not just seniors who have a need for a simple but capable phone but also pre-teens, the disabled and there’s also a huge market for people who need a great emergency or second phone! Welcome to the phone with the big heart as their advertising slogan says!
Let’s run through the main features that set this phone apart.

First thing you notice is that it is a pretty funky looking phone: in my case I had the mainly white with orange digits and display but other colours are available as well.
Size is just about perfect and the Just5 is very comfortable in the hand. The buttons are indeed big and easy to read. The display is basically a very simple two line affair with big letters on an orange background. Don’t talk about resolution as it is not important here. Main thing is that the letters are easy to read. There is a simple green and red button to indicate the dial and hang up functions, separated by the menu up and down button. There is more functionality hidden in the bottom row of buttons but we’ll talk about it in a minute.

On the left side you have the volume up and down button and below that a slider for the FM radio. This is one of the few phones where you can listen to the radio via the internal loudspeaker as well as the headphones. Funnily enough, the loudspeaker grille is nowhere to be seen but the sound is quite decent. Volume is up to 100Db!
On the other side you’ll find a slider switch for the built-in LED light which is another quite handy feature as the light is fairly bright. Below that another slider switch to lock the phone. On the bottom of the phone you have the charge port with a standard headphone jack.

The charger matches the bright orange colour which is actually a great thing because it sticks out like the proverbial sore thumb in between all the other bland black chargers on the extension board. Fortunately, it is similar to a Nokia charger so if you ever leave your charger behind you can always borrow one from a Nokia user! Mine came with standard US prongs so you might need to find an adapter for your country (in Australia we have slanted prongs). One of the great selling features of this phone is its long battery life: five or six days. This is great for an emergency phone but there is one proviso: if you are not in coverage the phone constantly uses more energy to find a cell and the juice runs out much more quickly. 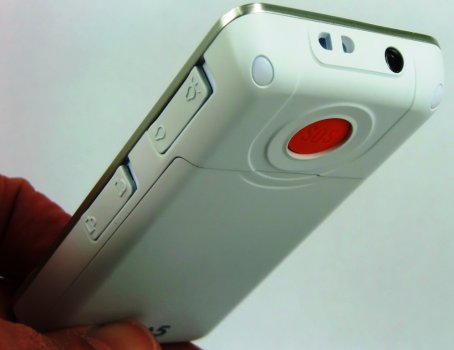 And now to the back of the phone where you will find what is the best feature on this phone, a big orange SOS button. This is a brilliant idea, particularly how it is implemented. Here is how it works:

If you press the button the phone will automatically send a preset emergency text message to each of the five emergency contact numbers that you have put in the phone. The phone will then start dialling the five numbers until a call is answered or, if you have no emergency number is set it will dial 911. At the same time a loud alarm will sound to attract attention to your plight because obviously, you only would do this in a real life threatening emergency situation so help can come from your immediate environment as well.

As soon as the call is answered you can talk over the speakerphone which means you don’t have to hold the phone and talk which may be impossible in your situation. All five emergency numbers will be dialled in sequence until someone answers the phone and there are three dialling cycles for each number.

You can easily see how this could be a real life saving feature for seniors, kids and basically every person in between those age brackets!

Please note: by default the Just 5 phone will dial the 911 number, but customers in every country should program their national emergency response group such as 012 or 000. 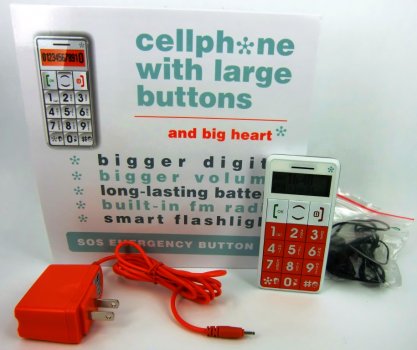 Other features
It is surprising that for its simplicity it still packs a lot of great functionality which you take for granted in a modern phone. Sure, it doesn’t have Internet access. Surprised? Of course not, that’s probably the beauty of this phone for the people that buy it. But you might need SMS functionality and it’s got it. Speed dial would be handy and yes, that’s also included. Trouble remembering all the numbers? You can store up to 100 entries in the phone memory. Voice mail and call history? Yep. And you can have a digital voice readout of the numbers as you dial them.

Testing, testing….
The Just5 phones have the advantage that they can work with just about any GSM carrier worldwide, provided they run on GSM 1800 or 900. They are unlocked and you only need a SIM card.

There’s one problem here in Australia though: the biggest network here with the largest coverage is NextG from Telstra. It runs on the 850 frequency. I had hoped that, particularly if used in an emergency, the Just5 could access this network as well but it can’t. Perhaps a future model will. So we tested this one with a GSM card from other networks as well: Vodafone and Optus.

Still no joy…
We use primarily 2100 and 850 here.
We really would like a world phone that can be used everywhere without any hassles.
Something that runs on 850/900/1700/1900/2100 frequencies.
So this part of the review falls flat which is a pity as there’s a lot to like about the Just5.
From the fairly huge market take-up – particularly in Russia – and also in the US, we know it works just fine over there. And it seems to be a very sturdy phone as well.

Conclusion
Simpler phones are quite a growth market and rightly so. Just 5 is not the only player in the market nor the cheapest. In fact, compared to some of the other phones aimed at this market it’s relatively expensive. But it is a well-thought out design that caters for both the young and older age groups. There’s one BIG proviso: with the limited frequency bands it will not work in every country! So double-check before you buy!

For just a shade under 120 bucks you can get it on their website or through authorized distributors in your area. And if you don’t want this anti iPhone there’s always the next model up: the CP10 (bigger screen, vibration, more rounded) and the just announced CP11 with a unique pop-out slider screen! More real estate… And when you get to the CP22 there will be so many features on it that you’ll have the full iPhone functionality… Just kidding!

PS  In the US and other parts of the world, except Europe and Russia, this CP11 model will be called J511. And it should be available on the market by the fall of 2010.
It’s somewhat of a pity that they abandoned the 09 – 10 – 11 sequence which looked like a good idea at the time since they brought out the first model in 09 and the second one in ’10 ..

But now at least they can release more than one new phone in a year! Bring ‘em on! On that note: we hope to review the J511 later in the year as well. If only it would run on the 850 frequency… 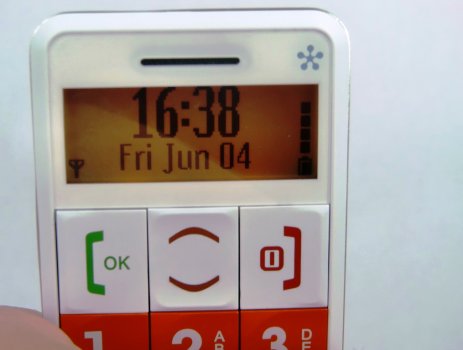