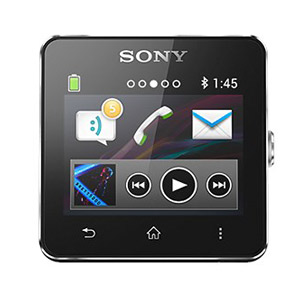 There is no denying it: there will be a smart watch in your future!
There are dozens of manufacturers having something up their sleeves, literally. We have already seen the likes of Samsung Gear, Garmin, and Pebble.

We also had a look at the COOKOO connected watch which was rather disappointing as to its functionality both as a watch and regards its additional features.
And so was the Sony SmartWatch in its original version.

Does the SmartWatch 2 fare any better?

Let’s be clear from the outset: smart watches are very much a work in progress still. But there is some good functionality to be had in the current range of devices. The Sony SmartWatch 2 does not have the full range of features of the Samsung Gear but then again it is not as expensive or limited in its connections either.

So here’s the good news: the SmartWatch 2 is ready to pair with any android device that sports any version 4. It’s also a good looking watch that is not ashamed to be a watch first and foremost. It looks like one and displays like one. Digital or analogue, there are a number of watch faces to choose from. The display is also readable in direct sunlight and, most importantly, displays the time all the time.
The Sony SmartWatch 2 also has an extensive range of apps that will give it the extra functionality. More on those below.

Getting Ready
We’ve become quite a fan of NFC pairing and setting up the SmartWatch 2 is a cinch.
You can also do it the old-fashioned way with Bluetooth 3.0 manual pairing. Every time you get a text or phone call your new Sony friend vibrates (there is no speaker) and shows who is calling. Obviously, you still need your phone nearby to answer the call or text. 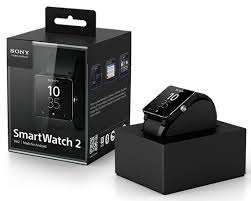 The transflective display is about 1.6-inch which is large enough for the core functions.
Ideally, model 3 will feature a curved display that is twice as long and follows the curvature of your wrist. However, for now we have to make do with a 220 x 176 resolution, which does make it look a little bit pixelated.

Just like some of the higher end smart phones Sony has made the SmartWatch dustproof and waterproof up to a depth of one metre for 30 minutes. Consequently, it has an IP57 certificate. So go ahead and take the plunge….

You’ll find a pretty large power/lock key on the side of the SmartWatch 2 which also controls the backlight . Similar to most phones we have touch keys below the screen: return, home and menu . It would feel more natural when the back key is situated on the right.
Completing the walk around we notice that on the left a tiny flap protects the microUSB charge port which only takes an hour or so to juice up the device. We’ve been getting consistently 3 days plus from a charged up battery which is not too shabby. 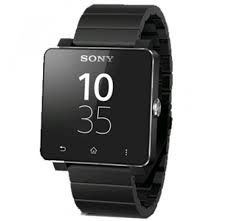 There is a fair bit of flexibility and variety when it comes to straps. Ours came in black stainless steel. There is a light brown or leather strap and a veritable rainbow in plastic (black, pink, purple, yellow or turquoise).
How does it feel to wear? Solid but not too heavy. I’ve got a Citizen Eco-Drive in stainless steel which matches the122.5g of the Sony watch.

Apps
The good thing is that there is quite a community of SmartWatch users and developers. So there are plenty of apps. But right out of the box the app scene is pretty minimalistic. So after you’ve downloaded the Smart Connect app from Google Play for your phone you can connect it via NFC and then start downloading the apps you like. It is disappointing that you need to do this for just about all the essential apps like Facebook, Twitter, text and email accounts….
Subsequently, you need to login to some of these social media networks on your SmartWatch as well so that they can sync with your phone. It would be a lot handier for Sony to preinstall most of the key apps. 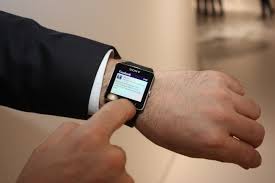 We have been spoilt with the fast quadcores on our phones so much so that the single-core 180Mhz processor feels sluggish and that’s perhaps the reason why we feel we need to tap the buttons more than once!
We played around with several camera apps, finding it handy to have a mirror of what your phone camera sees on the SmartWatch. If you like the shot you can control the trigger on your watch.

If you have a decent layer of security on your phone you might find it troublesome to get Gmail to work though.
Just about any Bluetooth connected SmartWatch will have a Find Phone function. But you’d better be within range for it to work.

Summary
A SmartWatch is still much of a novelty and you are guaranteed to get some quizzical looks around the office when your wrist is buzzing! The Sony SmartWatch 2 looks smart enough but lacks some smarts when it comes to performance and usability. It holds great promise for further development and that is true for all the smart watches out there.

The reality is that it is often times just as easy to whip out your phone or glance at it on your desk if you need to have it within range anyway. If you are an early adopter go for it. If you are desperate for a Christmas present for your boyfriend he will like it (and you as well for the gift).

Less than 200 bucks is a good price for it but if you can hold out till next year the choice will be much, much bigger with the iWatch and Google’s entry into this field. And hopefully SmartWatch model 3…
Anyways, we would suggest for you to pop by our friends at MobileZap to see all their smart watches, including the whole range of the Sony SmartWatch 2.