Move over iPad! Sitting on our test bench is Australia’s latest Tablet PC, a beautiful 10 incher from the House of Tegatech.

You may know Tegatech as the key distributor and seller of UMPCs and ruggedised tablet PCs to list a few of their niche products. And you may know them from previous reviews we’ve done, like the MediSlate and the Ruvo Avox. This time Tegatech has used their expertise to develop their own device. It is a 10.2″ Tablet PC with built-in 3G modem and they are calling it TEGA. They worked with the Chinese manufacturer K.R.T. to develop an Australianised Tablet PC by adapting firmware and the touchscreen to suit our climate. As we mentioned in our Upcoming Reviews highlight: we quickly came to the conclusion that this is a very handsome and handy device with plenty of potential uses. So here’s a more in-depth take on this tablet and let’s see how our findings panned out over the last few weeks.

The Unboxing
Always the most exciting part of any review.

You can usually tell from the packaging and the range of accessories how much care went into presenting the purchase to the new owner. My new machine came very complete indeed: it contained also a bottle of Asterix’s Magic Potion: Tegatech’s Clean Screen.

We wrote about it here and I suggested rather cheekily back then that “…  they should bundle a bottle with every UMPC or touch tablet that they sell as this is a most needed accessory.” Looks like they’ve taken me up on that.

Just as great was the addition of a box of chocolates! No, it was not their own brand but I think it was a well appreciated but unnecessary attempt to bribe the reviewer… Unnecessary, because we generally have been pretty stoked with the quality of the gear that Tegatech send to us for review.

But, nonetheless, the unexpected surprise sits well with any purchaser so I might suggest making this an extra feature as well when shipping the goods…

Keeping in mind that I had the evaluation unit without the TEGA branding to test, which is almost exactly like the final product minus the logo, the box was pretty generic as well. The TTP-10 as this TEGA tablet is also known by, is very well protected in a air-cell sleeve but for day-to-day protection it comes with a leathery jacket that doubles as a stand (see picture). The cut-out holes did not quite line up with some of the ports but apart from that it will give a solid protection in daily use.
The obligatory power adapter and a very generic basic manual complete the package. 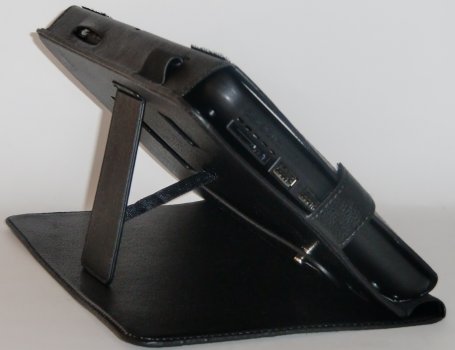 The TEGA tablet PC presents extraordinarily well: smooth but not slippery (critical for any handheld device!). Not a single button in sight except the sliding power switch on top, next to the 3 LED indicators (HDD, Power and Wireless).

On the front you have a 1.3MP camera and microphone. The left side sports a compound memory card reader (mainly SD) and a couple of USB connectors. The right side is a bit busier with audio connectors, LAN port, VGA and another USB connector as well as the AC power jack. At the very bottom resides the stylus.
The SIM card for 3G can be put into place by removing the battery. On the whole a very clean machine but surprisingly heavy. Not really at 1 kilo but the feel of it betrays a solid built quality. 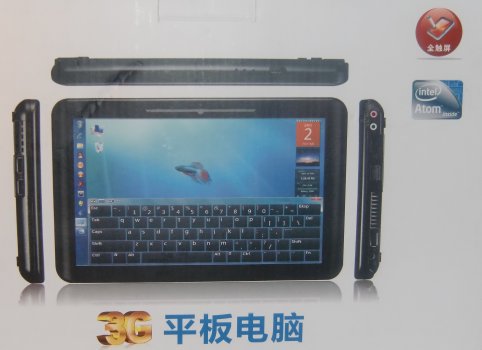 Inside the TEGA TTP10
So what are the main features of this tablet PC? Here’s a quick summary and some comments.

When you order this machine you can specify your OS or none so that you can put something like Ubunto on it. You can also specify an internal GPS which can be extremely handy if you use this machine for navigational purposes. See below. It has 802.11 a/b/g Wi-Fi + WCDMA\TD-SCDMA\CDMA2000 and includes built-in HSDPA modem (Sierra Wireless MC8790).

Testing
Being a tablet/slate/pad (see note at bottom) device, handwriting recognition is of prime importance. This is of course mainly of function of how W7 implements this but the interaction of screen & stylus has also a lot to do with the user experience. One word: it’s brilliant!

The same can be said of the on-screen keyboard. Looks great and is easy to use. I wouldn’t type a review like this on it but for quick emails it’s quite OK. This keyboard can be docked or you can have it floating on the screen. This is not a machine for heavy graphics, of course, but typical office-type graphics perform well on the 1GB DDR video memory.  Even W7 Aero looks great and zippy – the only penalty you pay is in battery life. More on that later. All Microsoft Office apps are reasonably fast on this machine.

A key feature in the Tega TTP10 is the ability to insert a 3G SIM card for easy access to the netherworlds of the intertubes. In other words: web browsing, mail and everything else you need to do on a computer for which you need to access the internet. WiFi works great too but in between hotspots you don’t want to be left high and dry either. So I swapped out the SIM from my Next G phone, opened up the battery compartment, found the slot and hey presto! Works like a treat if you know the settings. Mmm… might have to find myself a dedicated SIM for these capers…

We’ve done some initial testing for a specific application I have in mind: it would make an ideal kneeboard navigation device in the crowded cockpits I fly in.

See my PocketFMS review here.
You only need to rotate the maps to portrait mode on this device to make it work (PocketFMS also rotates on WindowsCE devices). As you can see I’ve clamped the unit in its case onto my kneeboard. I can probably also get some decent Velcro straps to fix the case of the device to my upper leg. If there’s room on the dashboard you can mount it there as well.

For other mounting options there’s also a heavy-duty Tegatech TTP10 Vehicle cradle with suction mount available for under 100 bucks which includes a car adapter.
I’ve taken the Tega TTP10 on its first flight today and can report that it’s heaps better to use than the HTC HD phone which has only a 3.8″ screen. Now there’s enough room to have other information panels displayed at the same time plus it’s a lot easier to read the all important numbers! Also: with a SIM card installed I can update the weather forecast enroute! 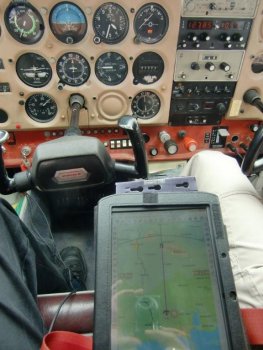 Gotchas
Sometimes, like when you’ve drained the battery, you get the dreaded Windows Resume Loader screen where you have to ENTER to choose your option. Not having a physical keyboard when you’re travelling presents a real problem then. Not even taking out the battery will resolve this conundrum…

Tegatech is aware that this can pose a problem and says:  “This is something we are working on and it needs a “Human Interface Device” driver to get the right result. This is getting looked at as we speak and will be sent out as an update to all that have purchased the unit.”

One minor design flaw is the location of the “exhaust” and the power jack. Normally, you’d hold the tablet with both hands at the lower half of the short sides, unless you’re touching the screen. Guess where the hot air blows? Right into the palm of your right hand! Guess where the power plugs in? Mmm… why not relocate these items to the top left side, out of the way? Of course, you can rotate the screen and have the camera now at the bottom. Not elegant but in portrait mode it’s a bit easier though. Fortunately, the hot air is not all that hot with the normal battery-saving power settings but you’ll find yourself having the device plugged in more often than you’d like… See below.

Battery Life
This is where the TEGA TTP10 falls short. An endurance of a mere 2 hours (2.5 at a stretch) on the 3500mAh battery is way too short for a handheld device. The purpose of this form factor is to compute away from power. Four hours is the absolute minimum these days in our opinion. Sure, there are ways to minimise power usage: get rid of the 3D Aero of Windows 7, reduce brightness on the screen, switch off WiFi (bit hard to do with this unit – no separate button or Fn function key combination). Bring some spare juice along? Not an elegant option either.

If most of today’s laptops or netbooks can offer way more than double this guy’s stamina when it comes to battery life, then this is a serious limitation that you should be aware of. A pity really as this TEGA is a pretty competent machine that you would want to make your perfect travel companion.

In talking to Hugo Ortega, boss of Tegatech, he reassured me that they are aware of the endurance issues and most likely we’ll see higher density cells used in the very near future on this model. A physically larger capacity battery is not really an option, given the aesthetics. Another way to minimise battery drainage is going to a backlit LED for the display. Most likely, we’ll see that happening in the next few months as well. Finally, it also seems that Windows 7 might have a bit of an adverse effect on battery life, according to recent acknowledgements from Microsoft. Expect some improvements from them as well once they figure out how to resolve these issues…

So, there’s hope down the track! 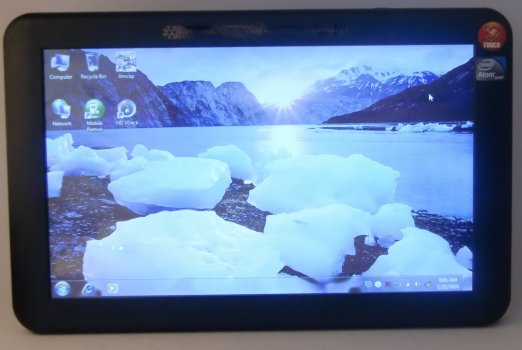 And finally:
We give it a solid 7 out of 10. It would have been 8/10 if the battery life had been close to 4 hours.  More details you’ll find on the Tegatech websites: www.tegatech.com.au and here

As an aside: you may not need it but their support is awesome! There were a few small issues with this unit being a pre-production model but they were all sorted out nicely. We will keep updating this review over the next few months as we plan to use it quite a bit while on the road (or in the air!). Keep you posted….