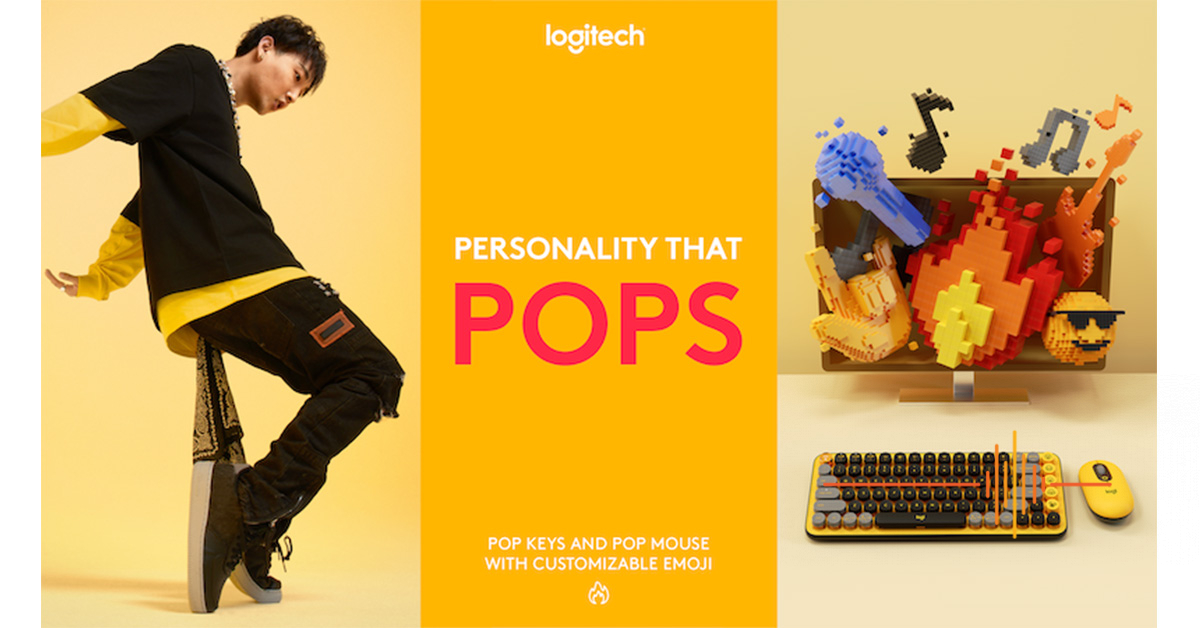 The recent launched of the Logitech Studio mouse and keyboard collection aims to bring vibrancy and individuality to the fore for users. The POP Keys, POP Mouse and Logitech Desk Mat in their vibrant aesthetics certainly is a departure from the drab beige and black computing days. Just the POP Keys nestled in the box is Instagram worthy. 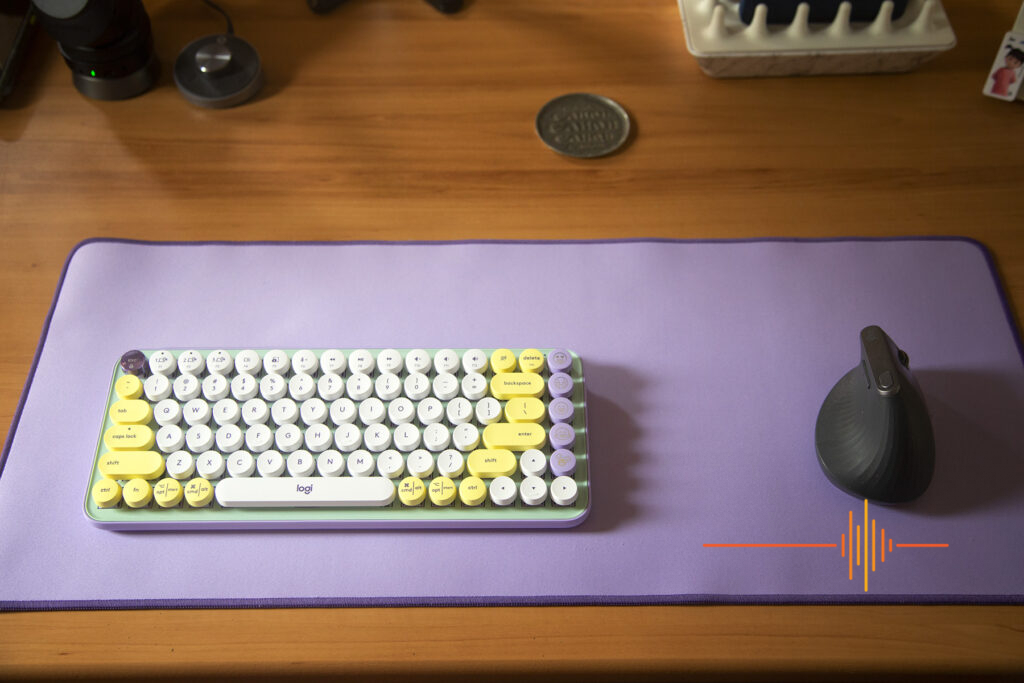 Logitech has kindly provided DRN with POP Keys and a Logitech Desk Mat for this review. Daydream Mint (or any of the other two colour schemes) is not for the shy, with each key and colour combination popping out in an attention seeking way.

The POP Keys utilises the 75% form factor, which isn’t a particularly popular in the keyboard market. From a practicality point of view, it retains most of the functionality of a TKL but everything is crammed together with no wasted space. The top row of function keys by default is assigned to a variety of commands such as switching between paired device, volume control etc. Using the Logitech software you can change it to traditional function keys which is my personal preference.

Overall it is akin to a laptop keyboard although every laptop I have touched over the many many years have a key difference to the POP Keys – more on that later.

Coming from the MX Keys which I have been pounding away for the last 18 months or so, the POP Keys are substantially higher profile than what I am used to. So much so I have to raise my chair in order to get my hand positioning correct.

The lavender desk mat is large and bold, providing plenty of working space at 70cm x 30cm. It is fully rubberised on the underside so it won’t move around as you run the mouse over it. 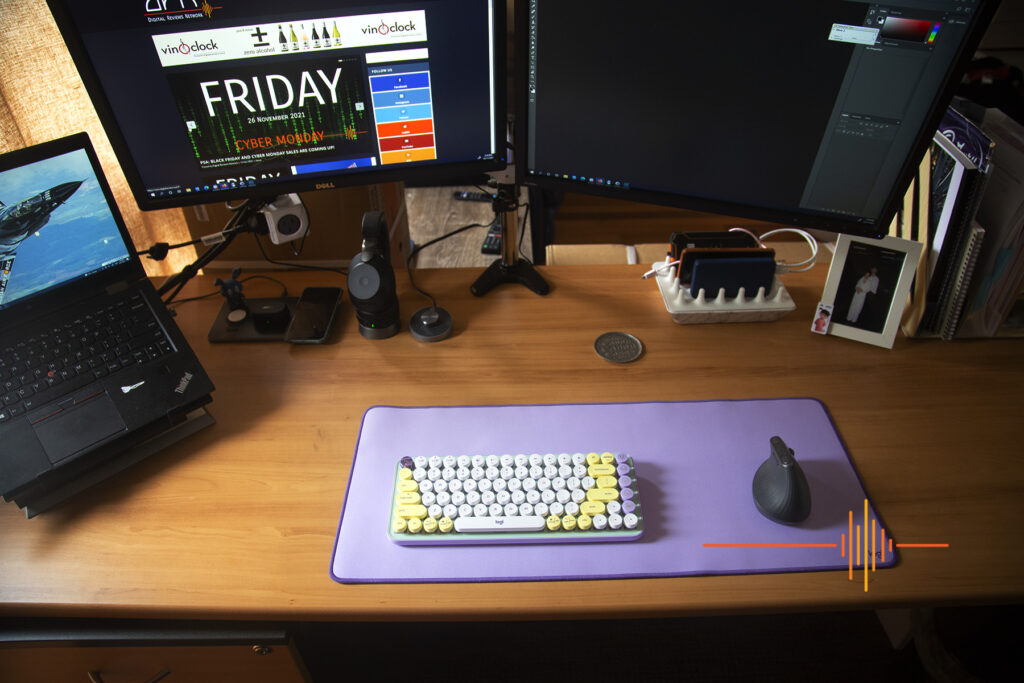 Changing keyboards always take some getting used to, this is the way. My life as a tech guy means I could be using numerous different keyboards on the same day, and I am just expected to reasonably smoothly interchange. To give you an idea, right now I have two Lenovo ThinkPads, same keyboard layout but slightly different pitch and spacing. A Toshiba laptop with a different layout, and two Logitech keyboards – the full size MX Keys and the POP Keys. Depending on what I am doing or testing, I am swapping between all of these as required.

To set the scene, I am old school. I will use command lines, keyboard shortcuts, whatever it takes to mash out commands and words on a keyboard. The mouse is an extension that I leverage to support what I can do on keyboard. I wear out keys on every keyboard I ever use, rapidly.

When I swapped in POP Keys as my daily driver, I was in a for a rude awakening. I mentioned earlier that the POP Keys are a higher profile that required me to adjust my chair height, it is quite a significant change to my set up. But we press on in the interest of testing tech, and the best way I know how is to dive off the deep end and use it like my life depends on it.

I have little issues adjusting to the spacing of the keys. In fact the round keys with the slight convex surface helps me center my fingers on the key as far as positioning goes. But when in actual use I found my speed and accuracy to take a hit. To get the POP Keys to mimic my current set up, I had to set the function keys to work as normal function keys, instead of extended control which is how Logitech sets it by default.

My problems started when I was doing my usual work, and quickly realised that there are no dedicated Home, End, Page Up or Page Down keys. I stopped and stared at the keyboard, willing my eyes to find them somewhere, not in the usual locations but anywhere on the POP Keys. Instead I discovered you need to use the Fn key in combination with the arrow keys. I pressed on for another couple of hours before I had to swap my MX Keys back in. My productivity had plummeted because the 75% layout simply does not suit my style.

Logitech describes the keys as “bouncy mechanical keycaps crackle like popcorn with every press”. I type fast, like three digits wpm fast, and I can only describe the tactile keyboard to be a cacophony of sound as I pound out my work. I have never been a big fan of clicky keyboards, and the crackle didn’t endear itself to me. 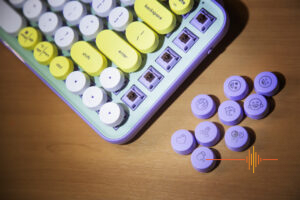 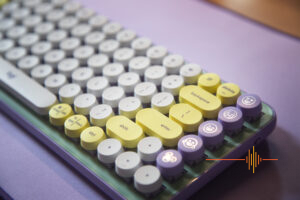 So I am special, but what about for other people?

I bailed out of using the POP Keys, I’m sorry Logitech, we just have a personality clash and it’s not you, it’s me. Or it’s you and me both.

The great thing about my place? I have plenty of testers on hand. Jett our gamer teenager loves his clicky keyboards, same as my partner Anita. So I bounced the POP Keys over to her, who uses her keyboard very differently to me. As a designer she leads with a mouse, and the keyboard supports the mouse usage. Her typing is more for labels rather than slabs of writing like I do.

Anita loves the bright and unique look of the POP Keys, the mechanical feedback, and have zero issues that there are no dedicated Home, End, Page up or Page Down buttons. For her, the compact footprint, bold aesthetics and solid feel is a winner. 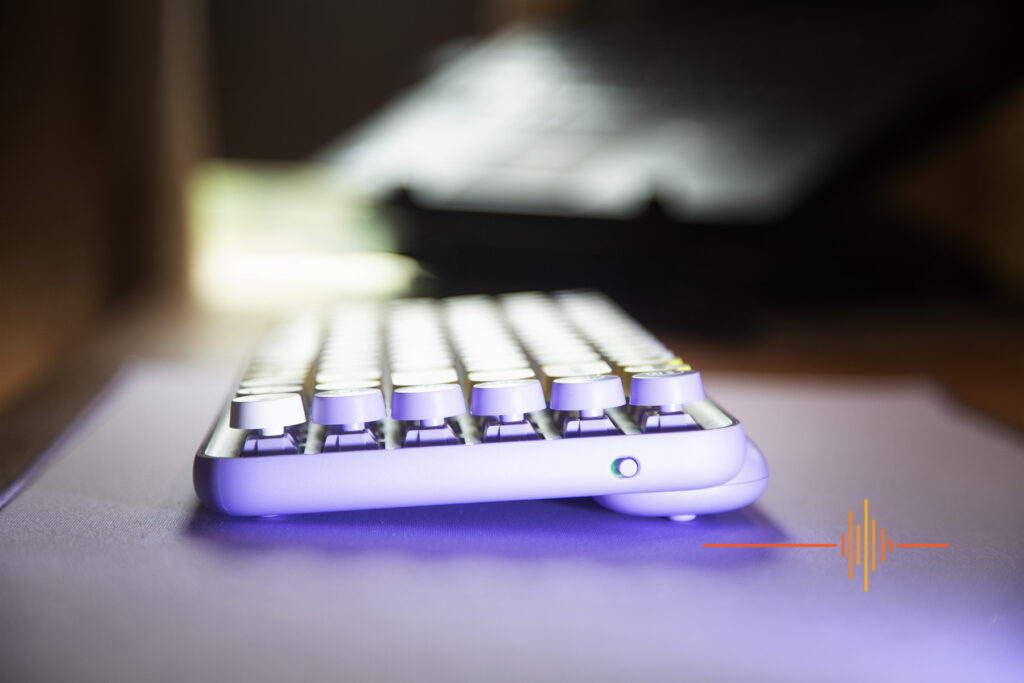 Rather than making the Mac and Windows keys interchangeable and programmable, Logitech has opted to include both sets in the layout. This isn’t much of an issue on the full form factor MX Keys, but on the 75% POP the keys are crammed in tight. I honestly would not have minded losing one set of those when they chew up two keys on either side of the keyboard. My kingdom for dedicated Home and End keys?

A tactile Cherry MX Brown clone by TTC hides under each keycap, and they are easy to pop off if you are inclined to change the emoji keycaps, or any other keys to customise it further.

The keycaps are made from ABC plastic which is less durable than the PBT alternative. Given my heavy usage of keyboards, I am likely to make quick work of the plastic and wear it down to a shiny, smooth and non-descript keys. This is a concern particularly when the legends are printed on, rather than moulded into the plastic or dye-sublimation.

The POP Keys is not a rechargeable keyboard. The 2 AAA batteries giving you a stunning 3 years of battery life, there is little to worry about there.

The Bolt receiver has a home under the battery cover. It doesn’t turn off the POP Keys when it is put there, the power button is on the right side of the keyboard.

The POP Keys can be paired up to three different devices over Bluetooth, but the included Bolt receiver will let you connect up to six compatible Logitech keyboards and mice with a low-latency wireless connection.

The Logi Options software will give you plenty of controls and options to make your keyboard yours.

The Pop Keys is not height adjustable, WYSIWYG. The incline is nice enough that it does not bother me, as long as I have my chair set high enough.

There is no backlighting on the POP Keys, and I covered off the missing dedicated keys (comprehensively) earlier.

For a tactile keyboard, the actual tactile bump is incredibly subtle. You really have to use the keyboard for a while to feel it.

Yes you can reprogram the emoji keys to something more traditional, but Logitech does not provide spare key caps for that.

The Logitech POP Keys look refreshing and eye catching. Keyboard preferences are intensely personal, and for me, the POP Keys are all about form over function. I can’t help but feel that Logitech could not come to a consensus on the detailed design beyond wanting a bold eye-catching look. The rounded keys looks great but challenging to touch type on. The tactile feedback is wishy washy, is it tactile or is it linear? The feedback from the TTC Cherry Brown fell somewhere in the middle.

There are pros and cons as always, but this one I think you really should try it out before committing to one. It does take some getting used to.

It is definitely not a keyboard for me. I could not hack it as a daily driver plus I genuinely loath tactile keyboards. On the other hand it suits my partner perfectly well, for her sense of aesthetics and style of usage.  The large working area of the Studio Series Desk Mat however, I will happily try and steal from Anita.

DRN would like to thank Logitech for their on-going support.