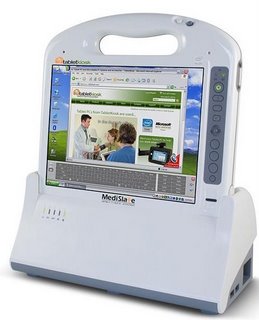 We introduced the MediSlate to you last week when Tegatech announced its availability here in Australia.

The TabletKiosk MediSlate MCA i1040XT, or Medical Clinical Assistant, as its full name is, has now arrived at our office for a quick hands-on review. Now I am faced with the almost impossible task to do justice to this incredibly cool looking slate PC in just 3 days.

So how did we fare?

Let’s start with the obvious: the form factor is what sets this device apart. The specs are not shabby either for its purposes but nothing you won’t find in a decent laptop. The built-in carry handle shows it’s not made for being stationary all day long. If you’re doing the rounds as a doctor or nurse and you need access to all your patients’ data and records and need to be able to update them on the go, then this device is for you. However, I’ll show you that far from just the huge medical market, this type of form factor can be extremely useful in other mobile professions as well.

But back to this particular implementation first.
Just come with me on my imaginary round with Dr Watson…

We come to our first patient.

Dr W. – after having exchanged the preliminary pleasantries, whips out his MediSlate (please note the incorrect use of the word “whips” as he was just toting the lightweight device along like a shopping bag with 1.3 kilos of apples).
He matches the patient with the treatment being delivered by using the built-in 2D/1D bar-code scanner thus helping to reduce medication-dispensing errors (ever try to read his handwriting?!)  Of course, the radio frequency identification (RFID) reader on the MediSlate automagically enables docs and nurses to identify patients and verify themselves as authorised caregivers. Dr Watson M.D. now inspects the festering wound and en-passant takes an image of the injury with the integrated 2.0 megapixel digital camera. The next patient requires quick access to the hospital’s Electronic Medical Record (EMR) system through the Wi-Fi connection. Then Dr W captures the patient’s vital signs directly into their EMR thanks to the built-in Bluetooth technology and reviewed the test results and x-rays on the i1040XT.

Finally our good doctor is reminded of his next appointment and the rest of his schedule for the day through Outlook and returns to his office where he docks the MediSlate.  The hot swappable batteries are good for 4 1/2 hours but a couple of spare ones ensures that he gets through the whole day without any problems.

Yesterday he dropped the device from hip height when someone bumped into him in the corridor.  Fortunately, the G-sensor noticed the sudden drop and parked the hard disk drive.  Even the sealed and IP54 rated smooth-surface enclosure enables the Slate to be easily wiped clean and disinfected to reduce the spread of germs. I can see why the MediSlate is just what the doctor ordered! Today I talked to an ambulance officer who I demonstrated the MediSlate to. He immediately saw the appeal in being able to upload info to the nearest hospital or having access to Patient Care Records on the road.

The Intel Concept
Okay, so we’ve seen that the MediSlate is semi-rugged and created specifically for the rigors, needs and workflow of the clinical environment, hence the MCA moniker, which we find designate a number of similar slate like devices that are out in the market today. For instance,  Fujitsu, Panasonic and Motion Computing all have quite capable entries in this race. All seem fairly similar. How come? Well, some years ago Intel identified a healthy growth potential in the health care sectors worldwide with the need to go all electronic when it comes to patient record keeping. They set out to specify what an MCA should look like, down to the carry handle and the inclusion of a variety of data capture technologies. Sure, some companies brought out an MCA according to Intel’s specification except they left out the Intel chip and went for Atom z5xx chips. Such is competition for you.

Anyways, the MediSlate stayed true to the initial concept and with its sunlight readable, 10.4 inch resistive touch screen with palm rejection technology allows for accurate interaction, even with a gloved hand, in almost any lighting condition. Now, if you’re in a profession where you’re always on the go and constantly need to access your computer, (think: mobile sales force, logistics officers, military personnel, heck, even students), there’s no reason why the MediSlate couldn’t do a better job than a notebook. Spilled Coke? Quick wipe. Dropped it from your desk? No worries. As long as you don’t play Frisbee with it, it should be OK. Except for one thing. They should have just called it TheSlate…

Well, expect many more implementations of this design for various other markets. Not everybody needs a barcode scanner, for instance. These mass market versions will hopefully drive the price down lower too. Currently, the base model of the MediSlate sells for USD2799 but all tricked out the MediSlate is available from Tegatech for AUD5599 and that includes the docking station and probably a bottle of that magical screen cleaner I wrote about earlier. Of course, with the MediSlate you can just use bleach or so…

Function Keys
We talked about the built-in barcode scanner. It’s operated by the grey button in the handle. The industrial strength barcode reader emits such a bright red light that it can double as a navigation light on a boat… The white button next to it, accesses the RFID reader, the antenna for which is also built into the handle. Going from top to bottom on the right-hand side of the MediSlate we have two status indicators, power on/off switch, Bluetooth switch (no Wi-Fi button, which has to be enabled in the software), Camera capture button and a Fn key (function). Then a small navigation and enter key if you don’t want to use the touch functionality, followed by 3 programmable keys and a Security key. Finally, the fingerprint scanner and the MRI scanner (just kidding about that last one!).

Other Observations
The MediSlate comes with a 80GB HDD or – optional – a 32GB SSD. Mmm… I’d go for an SSD in a heartbeat over a relatively slow (4200 RPM) spinning disk. No moving parts is the hallmark of the rugged reliability of an SSD – not to mention the blazing speeds – so it is an obvious choice, particularly for this environment. Except: 32GB is unacceptably meagre. If you load X-rays and other pictorial data in a machine like this, 64GB is the bare minimum.

* This unit has XP Pro installed even though in one of the battery bays it says that it’s got Vista… Obviously, you can choose which one you want to have installed. Hugo Ortega from Tegatech Australia, which has the exclusive rights on selling this MCA in this neck of the woods, mentions that the OS was “rolled back” to XP as that is what most Governmental organisations prefer. It will ship with either Vista, XP Pro, or XP Tablet

* There was no manual(s) in the two boxes. (the docking station came in a separate box). Of course, for such a radical design with all the manifold capabilities it seems fairly essential to include some guidance so be reassured that there will absolutely be a manual in the box.

* The same with the Recovery disk. Hugo again:  ” As per above there will be a recovery disk. The good news is that TabletKiosk is famed for the recovery media they provide, i.e. with three clicks and 20 minutes work you can restore to any OS from one of their disks.” This early review model being one of only six marketing samples in the world just missed out on these items.

Be aware that there is no external disk drive. So make that your first optional extra. My thinking? Could have been incorporated perhaps in the Docking Station.

* Unless you go for the Tablet PC there’s no Handwriting software installed… (I know, I know, doctors’ handwriting don’t give great results…)
Hugo mentions that: “touch screen is optimised for handwritten input, i.e. with “palm rejection” drivers built-in. If you notice you can lean on the glass and still use the cursor, then that is because of the palm rejection. Very exciting technology which allows manufacturers to use touch screens, instead of more expensive digitizer technology, and end-users to not be tied to a pen (since digitizers only work with a special pen)“

The tetherable (is that a word?) writing stick is the best stylus I’ve handled. Fits perfect in my hand and has two nibs or pointy bits. I’d get rid of that tether in a hurry though. The material it’s made of will collect unfriendly hospital bacteria in a hurry and cannot be cleaned. Much better to use a white plastic cable. 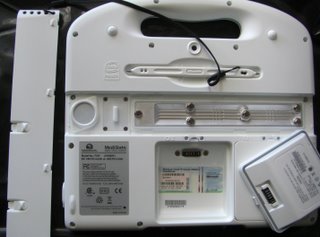 Being a sealed unit, TabletKiosk has taken great care to create a smooth exterior which is easy to clean with very few ports where germs can collect. No USB ports for instance and the DC power jack is also nicely covered. Surprising therefore is to find the back sporting many deep holes for the screws. These should really have a plastic plug!

However, the docking port connector is a beauty: no pins sticking out except for two large metal guide pins but the 32 contacts are very smooth. So let’s talk about the docking station.

Docking Station
The MediSlate is not complete without the docking station (DS). As with the slate PC itself, the DS is very well designed and extremely well balanced. This makes it possible for you to adjust the angle of view with one hand as the DS is very heavy. Two extra batteries can be accommodated and charged up so the MediSlate can indeed go non-stop. And we know how long those doctor shifts are! There are also 4 USB ports and a network port.

Finally, our Preliminary Conclusion
There’s a lot to like about the MediSlate. Perfect? No, but yet, perfectly suited for its intended market. I’ve indicated already a few possible improvements in the short time we had it in our hands. The EyesBoard is probably the best and most realistic looking virtual keyboard I’ve seen. It’s a pity that you can’t use it just with your fingers, you need to use your nails or stylus to get it to respond to your touch. You can resize it and have it “float” or docked.

I found the resistive touch screen very readable in direct sunlight and nicely responsive to my touch or stylus. The form factor of the MediSlate, handy as it is, is not for everyone. Expandability is pretty non-existent and there is no USB connection or optical drive but these very “negatives” can be ideal in an application-driven vertical market. However, some of that ruggedised technology and the ease with which you can clean this PC, makes me want to see this incorporated into the stuff we all use on a daily basis. Funny that, but Tegatech just announced a whole slew of rugged notebooks from the TwinHead Durabook stable… so stay tuned! 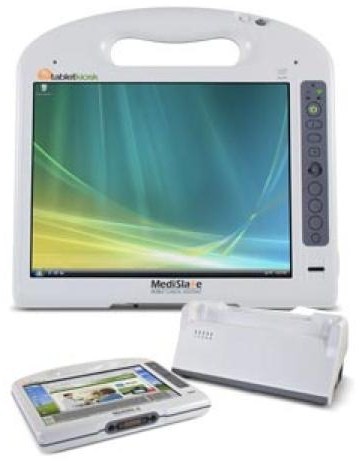 The MediSlate MCA i1040XT is fully compatible with most all software written for Windows compatible PCs running the identical operating system, and should perform on par with a similarly configured laptop or desktop PC.