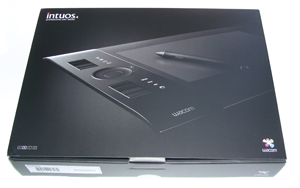 The Wacom Intuos 4 is an excellent professional pen tablet that allows creative professionals or even consumers to have their movement captured so precisely in digital form.  With an excellent sense of style while bringing in productivity features, this product allows you to get your drawings in digital from more accurately and more quickly than ever.

It is probably obvious that there are some things that you just can’t do with a mouse.  That is where the Wacom Intuos 4 comes in.  If you love to draw and want the tools that a computer has to offer, that is where this product shines.  Wacom is the leading provider of pen tablet products. In fact, they practically dominate the market in terms of pen tablets.  Ironically, this is my first exposure to one of their products.  I have to admit that I am no professional creative designer.  As a matter of fact, I am not good at drawing either.  So the purpose of the review is to take a look at the features of the Intuos 4 while finding out whether a pen tablet is for you.  There is more to it than just drawing, you will find out that a number of other things you can do that might just interest you.

The product was neatly packaged in a box with a handle.  The tablet itself was the first piece that I saw when opening the box followed by the pen and the accessories.

The tablet itself has a very sleek design.  For some reason, it reminded me of the design of the Logitech Dinovo series keyboards, but I actually thought the Intuos 4 looked even better.  It has a very slim design with curves around the edges.  The smooth edges provide support for the wrists while looking good.  I received the medium sized tablet which has an 8.8” x 5.5” drawing area.  On the side are a series of controls and buttons that I will talk more about later. 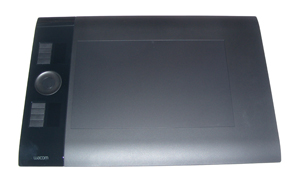 There’s not much to see underneath the tablet except for four rubber grips on each corner.  There is, however, a sliding switch near the edge.  The switch is used to choose between USB ports when the tablet is plugged in.  The reason is because this tablet was designed to be used by either right handed or left handed people.  So when you actually plug the tablet into the computer, there will always be a USB port at the edge of the tablet so that there won’t be a cable in your way while you are using the pen tablet.

There is a pen, mouse, and a pen stand included.  The pen feels just like an ordinary pen.  It is lightweight when you hold it in your hand.  The tip that comes with the pen looks like the tip of a stylus that you’d find with a PDA or resistive touch screen phone.  There are two buttons lined up along the grip area of the pen which allow you to quickly activate a setting or feature at the touch of a finger. 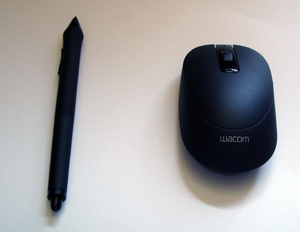 The mouse is pretty much an ordinary mouse.  It doesn’t require any batteries, yet it is only active when placed on the tablet and moving it around as if the tablet were a mouse pad.  It has your typical left and right mouse buttons along with a scroll wheel. 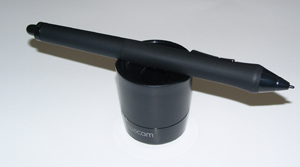 The pen holder may look like only like a base or pen holder, but it is more than that.  If you slide and twist it open, you will find a whole assortment of pen tips that you can use with the pen.  There are many tips to choose from to help you get the job done.

Installing the pen tablet couldn’t get any easier.  Simply put in the CD in your computer.  If the CD opens the AutoRun window, you will see a variety of options.  Just run the setup and install the provided software.  After the software installation is complete, just use the provided USB cable to plug one end into the tablet and the other end to your computer.  Your computer should automatically detect the tablet and install the necessary drivers in order to function.  After that, you are pretty much ready to start using the tablet.

I was very surprised by the texture of the tablet while using the pen with it.  Writing on the tablet felt smooth, yet there was friction.  I’d say it felt almost like writing on actual paper.  I think it felt more like writing on cardboard paper with a pencil.  The pen is able to detect a single gram of pressure.  This can be easily seen when using the brush tool in Photoshop.  I drew a straight line beginning with the slightest touch to having a heavy hand.  I could see a very smooth transition in pressure level just like the tip of a pencil would make.

The mouse was useful, but didn’t seem as necessary.  I had to keep the mouse on the drawing pad to move the mouse cursor which would kind of get in the way sometimes when I wanted to draw.  You can also use the pen alone.  If you put the pen approximately a centimeter above the drawing area, it will be detected and you will be able to move the mouse cursor.  I am the kind of person that likes to wrap my fingers around the grip, so I did find that the buttons on the grip did get in the way sometimes.  But the times I needed to quickly switch to a different function, the buttons on the grip helped.  Turn the pen around and it will act as an eraser in Photoshop.  This natural flow just like using a pencil really makes it easier to switch quickly between drawing and erasing without having to use the mouse and purposely click on an icon to enable erase mode.  This can save some time in the long run.

The buttons on the side provide a quick way to access the functionality that you use the most.  For example, the most useful is the touch wheel that allows you to easily zoom in and out when using Photoshop.  The other buttons are plain buttons but with an OLED screen beside each key explaining the purpose of each key. 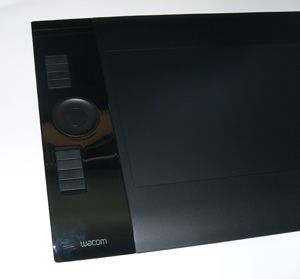 Having the Intuos 4 doesn’t limit you to just Photoshop.  It is used in many different industries including medical, automotive, construction, etc.  I’ve only exposed just the basics that can be done with the product; the rest is up to you.  Just out of curiosity, I tried it in other various ways.  For example, I was able to easily take a Word document and quickly write in comments or drawings on top of the document.  I was even able to use the pen with an online game where people guess the word that you are trying to draw.  People were amazed at how smooth my drawings looked just as if I were drawing on a piece of paper. 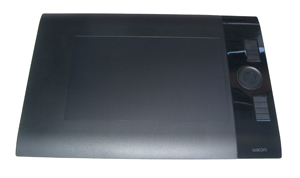 The Intuos 4 seems to strike the perfect balance between precision and affordability.  Wacom has other product lines including the Bamboo and the Cintiq.  If you are just looking for something to play around with and just want a basic drawing pad, I’d recommend a Bamboo series model.  If you are an extreme professional and just need that built in LCD screen in the touch pad, then go for the Cintiq series.  But for everyone else, I’d recommend this Intuos 4 series model.  The Intuos 4 goes for about $370 online which is definitely justified if you do tons of photo editing, design drawing, etc