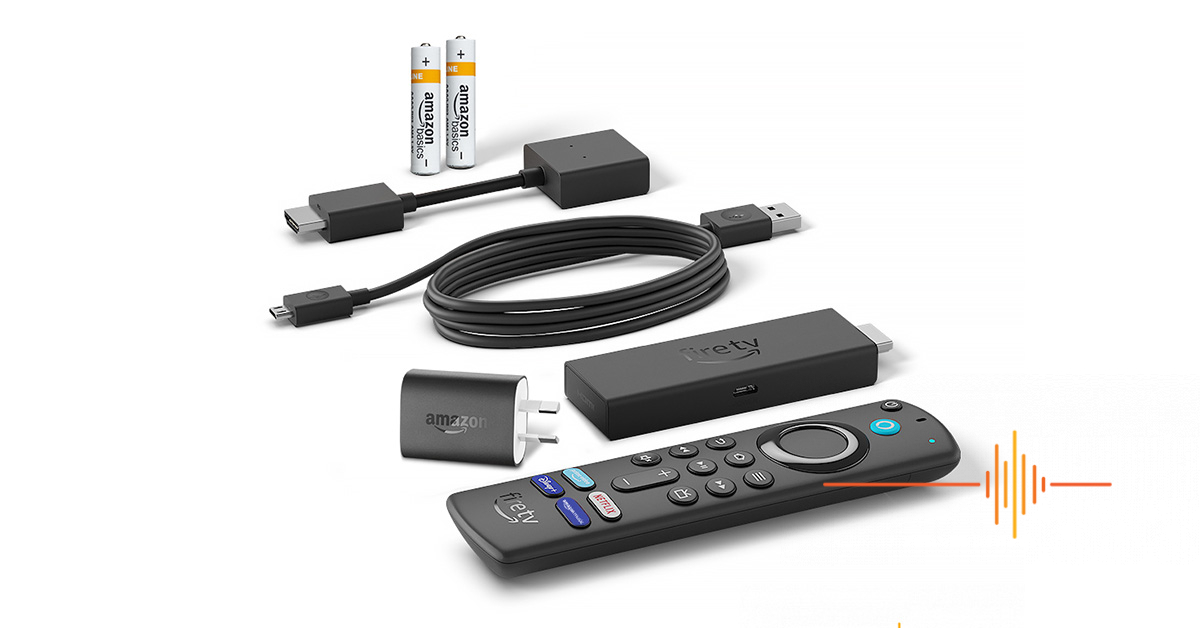 Our Ginger covered off the Fire TV Stick 4K in quite some details back in June, let’s see what differences does the 4K Max offer. 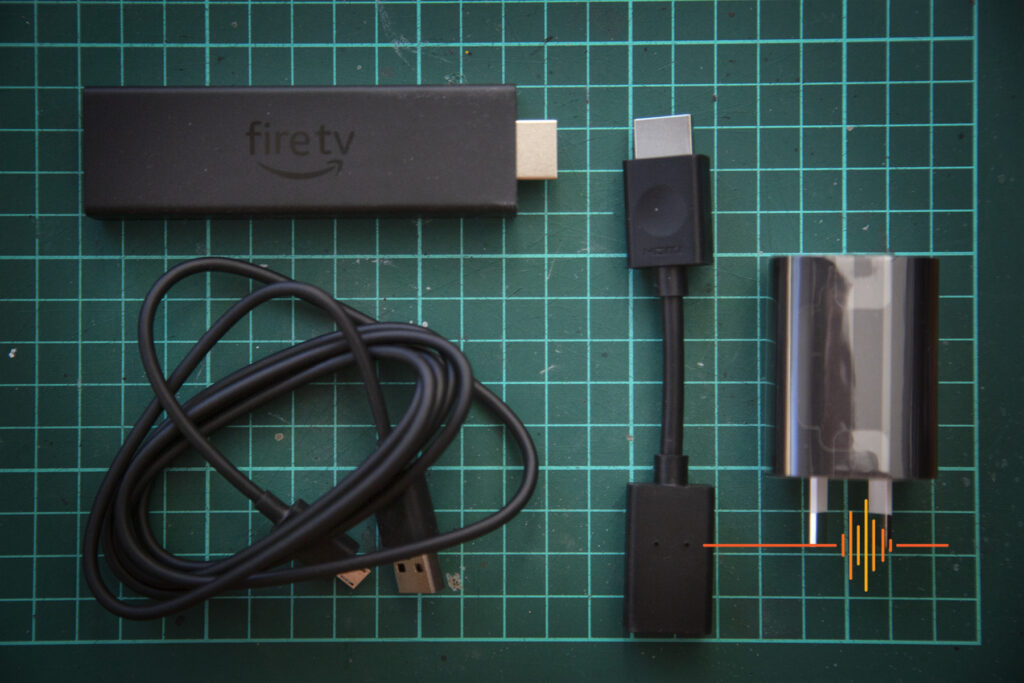 What do you get out of the box?

There is of course the Fire TV Stick 4K Max itself, which is a bit like an oversized USB flash drive, with the HDMI connector on one of the long ends. The remote control with a pair of AAA batteries.

To work with wall mounted TVs or areas that does not have much space behind the TV, a short HDMI extender cable is included, with 3.5cm of cable flex allowing you to reposition the Fire TV Stick.

There is a power requirement to drive the Fire TV Stick, and Amazon includes a 1.5m USB cable as well as a power brick *gasp!* so everything you need to get going is on hand. The power brick has an output of only 1.8 Amps, which also means I have no problems ditching it and plugging the USB cable directly into the onboard USB on my power board. 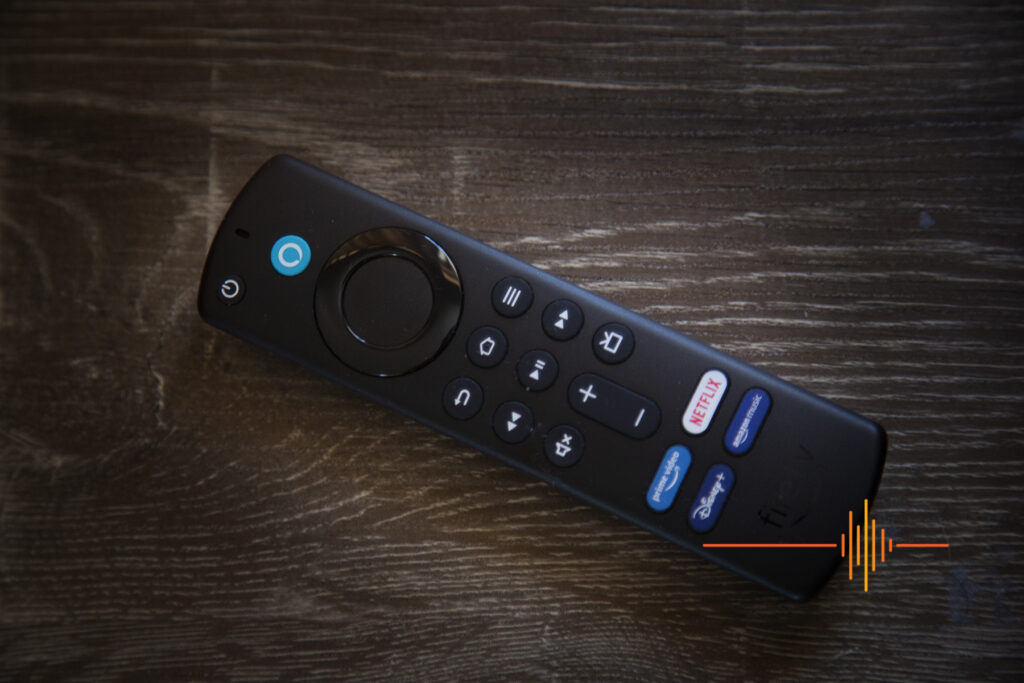 On the surface the actual Fire TV Stick itself looks identical, the 4K Max has the Fire TV and Amazon logo embossed on the finish.

The remote has had a small makeover with extra buttons. In particular the mic button is now in the blue Alexa Voice logo. There are also dedicated buttons for Amazon Prime, Netflix, Disney+ and Hulu, as well as a volume mute and Live TV buttons.

Peeking under the hood, there is very little difference between the 4K Max and the 4K. The processor and GPU both have had a modest bump which contributes to Amazon’s claim of “40% more powerful”. Resolution and audio output are exactly the same.

A very noticeable upgrade is the Wi-Fi 6 support as well as 802.11ax, both of these protocols are not supported on the non-Max variant.

I already have a smart TV, why should I care?

Actually you should care. TVs (can be) a large financial investment – you are paying for the screen, the electronics to drive the screen, as well as all the smarts for the Operating System (OS), WiFi modules etc.

Even if you bought the latest and best at the time, things are constantly changing. Let’s face it, there is little buffer in hardware specifications for anything, it is suited to the OS it is paired with on launch. Later generations of OS are generally more resource intensive, coupled with aging hardware, we start to see performance degradation. Modules can fail, supported wireless protocols no longer matches what you run elsewhere or just simply not fast enough. But you still have a perfectly good screen, you just have to live with intermittent issues or fork out for a replacement right?

This is my exact scenario. I have a Bravia 4K screen from 2015 where the screen is still perfectly good. The OS and many app updates is taking it’s toll on the processor. WiFi is intermittently dropping out requiring (sometimes multiple) restarts to reconnect. Certainly when I change routers in the backend a few times a year for testing, it does not make the situation any better. I do have plenty of bandaid fixes, but at some point, the bandaid is not going to be large enough.

By offloading everything to the Fire TV Stick 4K Max, all I actually need is a working screen and HDMI port. 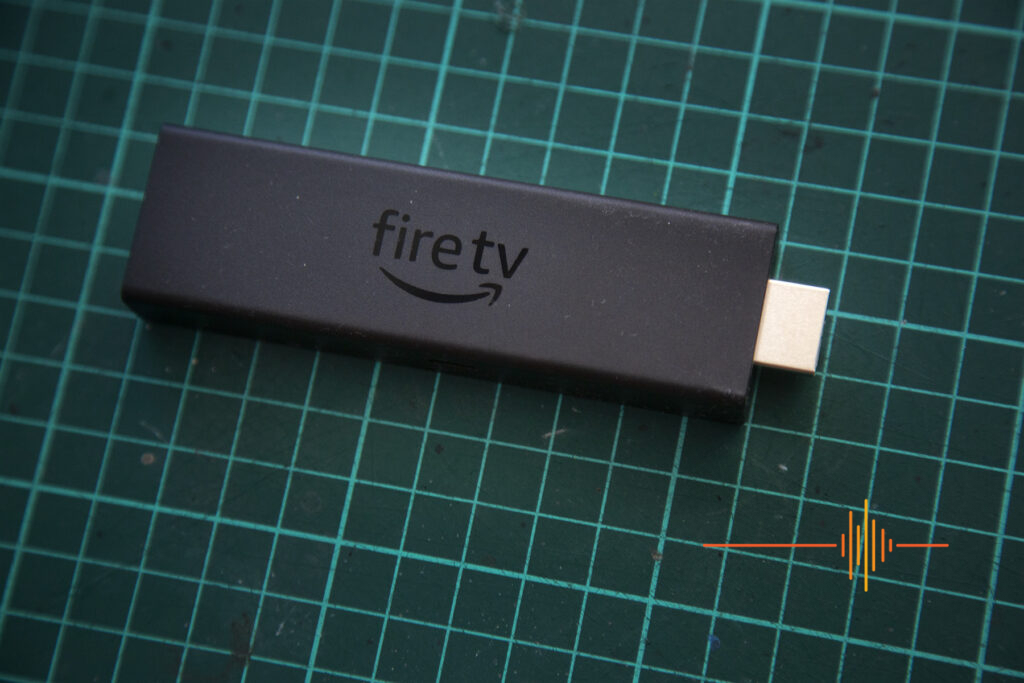 It is so ridiculously simple that I was up and running in hardly any time. You plug the Fire TV Stick 4K Max into your best HDMI port, hook up a power source, change the source on your TV to the HDMI input, then follow the setup guide.

You have to have an Amazon account here to successfully complete the setup, no bones about it. You don’t have to have a Amazon Prime subscription, but definitely need an account.

Once WiFi is connected, it will automatically download the latest firmware updates and restart the Fire TV Stick. At some point after this, updates will also reach the remote as well. So don’t be surprised to see multiple update messages for different components.

The setup process will also ask you what brand of TV you have it connected to, this is so that the remote can be programmed to send the correct codes to work with your TV directly.

Here Down Under, all the main free-to-air channels apps are available, Amazon Music and Spotify for music. Interestingly enough, the Plex app is free to download on the Fire TV Stick when it is a paid app on Android. I did not go through and comprehensively check out what is available, but everything that I do use regularly (or semi regularly) are available. 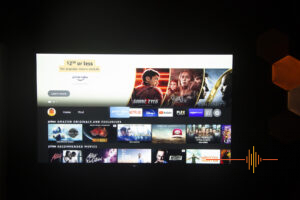 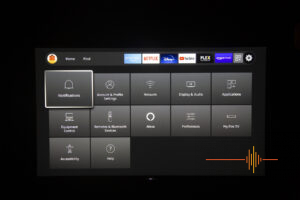 2021 technology on a stick makes my 2015 TV feel brand new and up to date. Compared to the circus I had been going through the past half year or so with my TV just to watch a show, where even my toddler has learn to be patient before I can fire up her shows, the sub-10 seconds delay at worse for the TV to come on, and the Fire TV Stick to launch an app is a vast improvement.

What’s more, streaming is buttery smooth. I don’t have the occasional stutter (it’s wonderful to be able to drag out Frozen or Wreck-It Ralph from 100 minutes to a little over 2 hours because of stutters, really distracts the toddler for a bit) that was creeping in with my Bravia natively.

In fact the streaming is so good, that Ginger insisted that I add this paragraph in.

Paramount Plus is the latest Australian streaming offering. Tied to Ten, the streaming platform offers shows such as NCIS, The Stand, Star Trek Discovery and more, along with some exclusives, including NCIS: Hawaii, and the highly anticipated Dexter: New Blood. The service also has a reasonable collection of movies. Most importantly, for Ginger, is the streaming of live games of the A-League. Through the Fire Stick, the live game is in high definition, clear and without any buffering issues or pixelation. The same can’t be said for his friends who are watching it on their TVs through other devices.

Jo has also mentioned that she has a Fire TV Stick plugged into a very average IQ ALDI TV, and it brings all the smarts to a cheap screen, plus impressive differences in the picture quality.

One different I am really enjoying is how snappy the Plex app is on the Fire TV Stick. Running the Arm version of the Android app has always been laggy, even from day 1. Firing up the app isn’t an issue, but the connection to a local server, as well as starting the stream always too long with the dreaded “connecting to server” message. On the Fire TV Stick I simply don’t encounter any of these issues anymore.

The Fire TV Stick 4K Max also brings PiP, or Picture-in-Picture, to the fore. You can be watching your show, but view your (supported) security camera in the corner. It is a very handy feature if you are keeping an eye out for a delivery or visitors, whilst otherwise engaged in a show.

Screen mirroring and Miracast in much of my experience sucks. I have dealt with it in various work capacity and the vagary of it’s reliability is more pain than it is worth. This particular feature on my Bravia simply does not work. So imagine my pleasant surprise when the Fire TV Stick’s screen mirroring feature works every since time I connect to it. Last week I was dialled into various video meetings with my laptop, casting it to the Fire TV Stick and I get a solid connection on the first try every time. 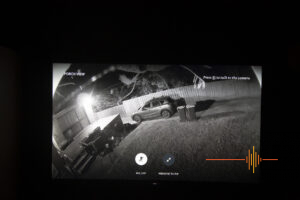 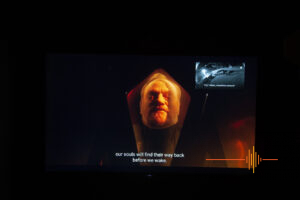 There is no change to how the user experience is across the range. Ginger had this covered off nicely in his review. The top of the home screen are large banners that rotate and highlight different shows.

The next row is a customisable row to show your top 6 apps. All you need to do is scroll to the more app icon (the 3 squares and a + next to the settings cog), move to the app you want, press the hamburger button on the remote and you can reorder these icons.

Further below that are rows of suggested shows mostly from Prime, regardless of whether you have a subscription or not. It could be annoying for some, and there is no way to turn it off. I guess … it’s advertising.

Definitely one of the thing I (will) love about the Fire TV Stick is the ability to take it with me on vacation. Everything is encapsulated on it so no need to input your credentials into a strange device at every stop. Just take your Fire TV Stick and go.

I am being critical, but hey I am a hardened reviewer of tech.

Firstly, can we please be done with micro USB? It’s had it’s time. I know the Fire TV Stick does not need USB-C, but my Christmas wish would be for USB-C cables only in my house.

I would have liked to know what Wi-Fi protocol the Fire TV Stick is connected on. I have recently swapped in the Eero Pro 6 mesh setup, and it would have been a nice touch to see I am maxing out my connection there.

Found a minor issue where when Netflix has been paused for a while (like long enough to organise snacks or resettle a child), my show will buffer to 25% and fail to resume. It is easy enough to go back one step on the remote and get back into the show. Still a bug nevertheless.

The Amazon Fire TV Stick 4K Max gives new life to cheap or old TVs, as long as you have an HDMI port to plug it into. At a RRP of $99 it brings the latest features and will future proof your purchase for a few years.

At this kind of price you could upgrade it any time to take advantage of any new must have features, no need to splurge on a TV unless you are upsizing, or going for for 8K+. But there is a current  at time of publishing Cyber Monday deal which brings it down to $59, which is a no-brainer.

Definitely enjoying this one, thanks Amazon for the support once again. 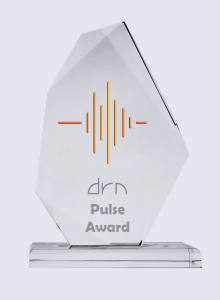