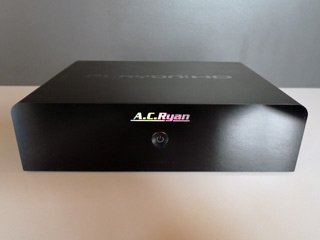 With network media players being the home video equivalent of the iPod MP3 player, more and more variations (of what are essentially the same product) are appearing on store shelves.

Unlike MP3 players however, the network media player segment is yet to be dominated by any one major player. This allows manufacturers to release genuinely different devices in the hope that their unique formula might just catch on and be the next big thing.

First Impressions
Unlike the recently reviewed Popcorn Hour C-200, the PlayOn!HD has no intention of looking like a traditional full size hi-fi component. At 230mm across, 165mm deep and 60mm high, the PlayOn!HD’s dimensions make it only slightly larger than a Nintendo Wii game console.

The unit’s exterior is almost entirely fashioned from black plastic. The top and sides are matte while the front face is finished in super high gloss finger print magnet black. The face is dominated by a slightly too visible reflective AC Ryan logo which sits above a centrally located power button. The power button, like an otherwise invisible playOn!HD logo beneath it, lights up blue when the unit is in operation. The only other (barely) noticeable feature on the front of the PlayOn!HD is a small transparent square which houses the IR receiver.

While the left hand side of the unit is unremarkable, the right hand side of the PlayOn!HD features three connectors: Near the front of the case is a moulded SD card slot while half way to the back there are three USB ports – two USB A ports and one USB B. 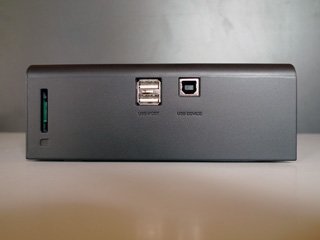 The rear panel on Network Media Players is usually packed with ports and the PlayOn!HD doesn’t disappoint: From left to right the back panel features a 50mm cooling fan, optical and coaxial audio ports, an Ethernet port, HDMI and a full spread of both component and composite RCA outputs. To the right of these is a small 12V DC in port. 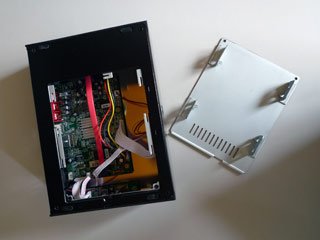 On the unit’s under side is a small panel which not only reveals the PlayOn!HD’s innards but also located on the panel itself is a 3.5″ hard drive mounting bracket. Hard drive installation is as straight forward as it can be with SATA power and data cables sitting loose ready to connect a user supplied hard drive.

All in all the PlayOn!HD looks quite good on the outside and its form factor adds a genuine sense of portability.

In the Box
The PlayOn!HD comes with pretty much everything you need to get up and running. Included in the box is a 1.8m HDMI cable, component cables and even a set of composite RCA cables. Two USB cables are also included: A short USB (Type A) extension cable and a USB A to USB B cable for connecting the unit to a PC. A remote, two AA batteries, a small bag of hard drive screws and a user manual were also included along with an Australian 12v DC power supply. 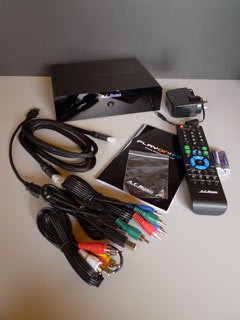 The PlayOn!HD comes with what is arguably the most complete cabling bundle we’ve seen in a network media player so far.

While our unit came without one, the PlayOn!HD is available with a pre-installed hard drive in 500GB, 1TB and 1.5TB capacities. The other option available – but not tested – is a 802.11n wireless USB dongle.

Usage and Testing
We spent a number of weeks with the PlayOn!HD during which we tested a variety of video files comprising mostly of 720p/1080p MKV files, the odd WMA file and also some standard definition AVI files. On the whole, the playback performance of the PlayOn!HD was excellent. All WMA and AVI and MKV files tested worked flawlessly.

Both Dolby Digital and DTS were passed through to our receiver without issue. WMA, AVI, MKV. Perfect.

The PlayOn!HD seemed to have some issues with subtitles however. While all muxed subtitles and external SRT subtitles displayed correctly, we were unable to find a way to turn them off by default. Every time an MKV file containing subtitles was played, the subtitles would appear on screen. Hopefully this will be fixed in a future firmware update.

Playback of DVD ISOs were no problem for the PlayOn!HD. In fact, DVD menu navigation was the fastest we have seen in a network media player. Also, unlike other players tested recently, the PlayOn!HD had no problem playing back FLV files.

Beyond basic playback, the PlayOn!HD offers torrent, internet radio and flickr support which is all fairly standard fare for players of this kind. There is also a media library implementation for an internal hard drive (when fitted) which we suspect is in preparation for the next firmware update which will bring YAMJ movie jukebox support. 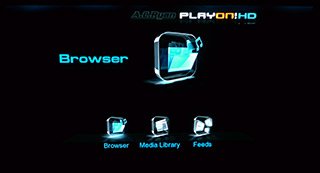 The lack of Blu-Ray ISO support withstanding, the PlayOn!HD demonstrated itself to be capable of playing back all formats tested without any problem. We saw no evidence of glitches or out of sync audio. In fact, if Blu-Ray ISO playback isn’t a requirement, we’d go out on a limb and say that the PlayOn!HD has the most robust playback capabilities of any player we’ve reviewed thus far.

Unfortunately, there is a downside to the PlayOn!HD and that is in its user interface – from the remote control right through to the on screen graphics.

On the coffee table, the PlayOn!HD’s remote control looks fairly standard but once you pick it up and use it, it isn’t long before you notice some some pretty strange design decisions. Firstly, the stop button is amongst the four smallest buttons on the entire remote control. The second thing we found odd was the placement of the skip and rewind buttons. While they are centrally located, they are arranged vertically. We have no doubt we could get used to it, but since every single remote we subsequently looked at arranges these buttons horizontally, we’re not entirely sure we want to!

And then there’s the GUI. The graphic user interface has some nice ideas but is ultimately cluttered and of very little aesthetic appeal. The ability to automatically preview video of files the cursor is over is nice idea for example, but being presented within a rudimentary file browser makes it quickly lose its appeal. Another example of a good idea, poorly implemented graphically is the onscreen keyboard. The keyboard made entering network locations simple and incidentally much better than the Popcorn Hour mobile texting approach, but was aesthetically very ordinary. 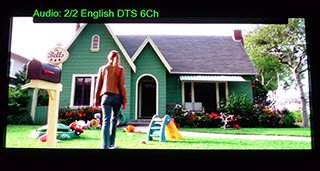 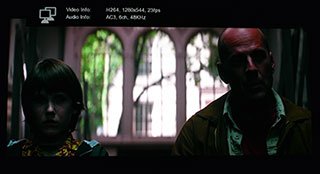 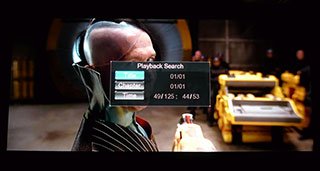 Like the remote control, the GUI seems to be missing what in design terms can be considered common sense. The onscreen messages and accompanying graphics have little consistency and appear to be drawn from random sources. Compare the fluro green audio selection message to the file information display to the time (playback) search display. And the circular arrows that appear while waiting for network resources are beyond words. 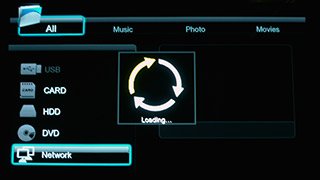 In fairness, the on screen interface does have its moments – The opening menu for example is neat and features well crafted icons. While our understanding is that the interface is not a current priority, we hope that with future firmware revisions the interface can become more uniform. 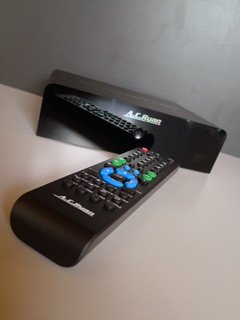 Conclusion
While the PlayOn!HD has a GUI only a mother could love and the odd /niggly/ firmware issue we’ve come to expect from network media players, it has a fair bit going for it. Firstly, the physical hardware looks great and at 149Euro the price is competitive. In fact, for the price the unit’s playback ability and included kit is excellent.

If you can get past the GUI – and at the end of the day you should be spending more time looking at the content than navigating to it – the PlayOn!HD’s impressive playback performance makes it an inexpensive alternative to the more expensive network media players currently available.

The PlayOn!HD is available from the PlayOn!HD website with prices starting at 149Euro or 199AU locally.

We’d also like to thank the aptly named, Legend for making this unit available.