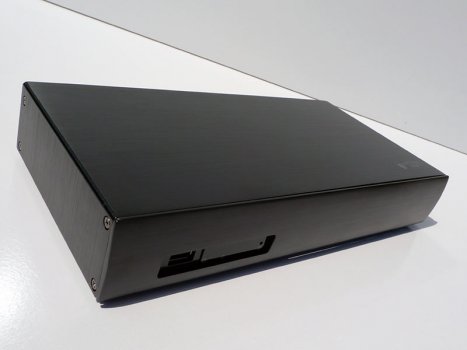 The A-210 is the latest iteration of Popcorn Hour’s A-series line of Network Media Tanks. As the natural successor of the previously reviewed A-200, the A-210 not only sees a physical update to the exterior aesthetic, but the current firmware also heralds the coming of the much anticipated Network Media Jukebox graphic user interface.

We’ve been following Syabas’s Popcorn Hour units since our initial review of the game changing Popcorn Hour A-100 in January, 2008. In April that year, we looked at the mildly updated A-110. We then looked at the A-200 which despite its strong playback performance, left us wanting in regards to its physical appearance.

While we were always expecting a strong playback performance from the new Popcorn Hour, we really weren’t sure what to expect with regards to the unit’s physical look.

First Impressions
As soon as we removed the A-210 from its packaging, the old A-200 in the room let out an audible sigh. Gone was the plastic casing of the old unit and in its place was a 2001 monolith black, brushed aluminium surface. The A-210 was quite the looker! 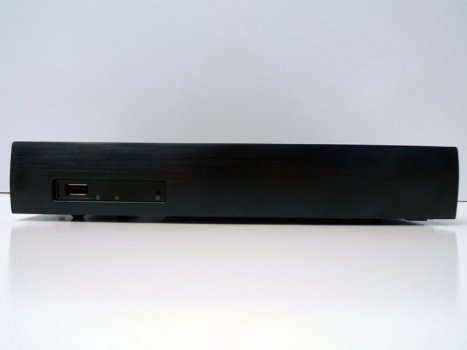 The front, top and sides of the A-210 all matched uniformly and being predominately aluminium, were cool to the touch. A small recessed panel adorned the front face which housed a USB A port, two LEDs and a pinhole reset switch. The top was nondescript other than a small grey Popcorn Hour logo, while the sides were similarly bare apart from some fixing screws.

The rear panel of the unit matched the rest of the unit perfectly and featured all the ports we expected: Component video, Composite Video, RCA Audio, Coaxial and Optical SPDIF digital audio, S-Video, USB B (Slave), USB A, HDMI, Ethernet and a 12V DC IN Port. It is worth noting that the ports – and even their arrangement – are identical to those of the A-200. 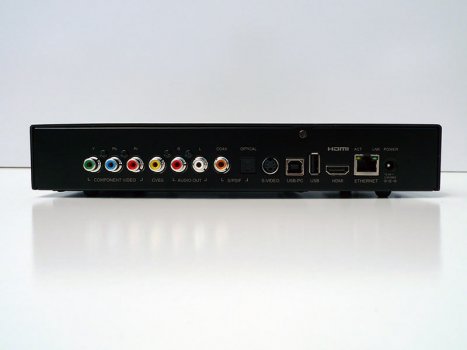 The bottom of the case was part metal and part plastic, with an array of air vents located on the right hand side of the unit. Removing four screws on the plastic section of the underside revealed the hard drive tray mechanism, which like the A-200 before it, was cleverly implemented: User servicing of the hard drive in the A-210 was a piece of cake.

In the Box
Along with a Warranty sheet and an Installation guide, the A-210 came packaged with the almost mandatory A-210 Quick Start Guide as well as an Apps Market and NMJ (Network Media Jukebok) Guide. Cabling included an HDMI cable, a USB A to B cable, a short USB A extension cable and a power/plug pack cable. Two AAA batteries were also included for the familiar silver remote. 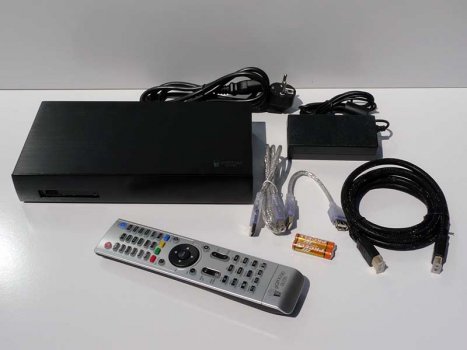 Like the rear ports, the included remote control was identical to that of the A-200. The remote has always proven itself to be easy to use with decent sized keys and bright white backlit keys. Why fix what ain’t broke, eh?

Usage
As with all Popcorn Hour units reviewed thus far, the A-210 proved itself to be able to play pretty much everything we threw at it. Even full Blu-ray ISOs worked without issue albeit without full Blu-ray menus. All in all, general playback capabilities of the A-210 was in line with the A-200 sister unit which are excellent.

Beyond this, the Popcorn Hour people have been working on improving the original GUI. While the Popcorn Hour interface has always been neat and functional, the general look and feel of the GUI has left some wanting; Particularly those who have previously used XBMC or more recently, Plex. While we personally liked the clean traditional interface, recent firmwares have baked in the new Network Media Jukebox (NMJ) interface. 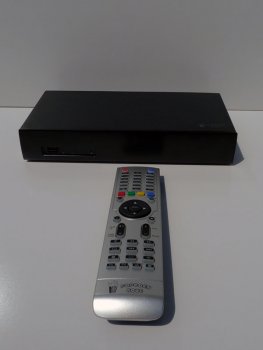 While third party “jukebox” interfaces have been available for a while, they all required a separate PC to do the actual heavy lifting: Creating and updating of the UI has always been done on the PC and then transferred to the Popcorn. To this end, when you would update the files on your Popcorn Hour, you had to jump back onto your PC and update the database before retransferring it to the Popcorn. Thanks, but no thanks.

And here’s were Popcorn’s NMJ implementation comes in. Popcorn Hour’s new NMJ interface is coupled with a built in backend that allows for all data needed to create the interface to be done from the unit itself. While this may not sound revolutionary, for a standalone media player, it pretty much is. 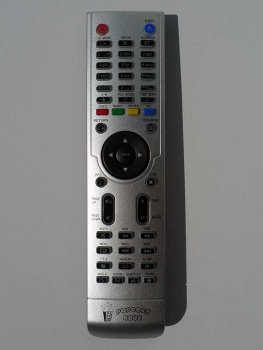 You Tube clip of NMJ Interface.

Over the past few months firmware updates have brought improvements, but on the whole it still feels sub par. Perhaps there is some irony that the firmware update users have waited a long time for, is actually itself awaiting a hardware update!

Despite this caveat, the unit seemed to be able to update its database while the unit was playing back video which was handy. And in cataloging a few of our files, it mostly manged to harvest their details from IMDB.

Along with the new interface, Popcorn Hour has jumped onto the “apps” bandwagon and included is the ability to listen to Internet radio, weather, etc. While we gave some of the apps a run, we found the whole set clunky and coupled with the remote control, not entirely practical for every day use. 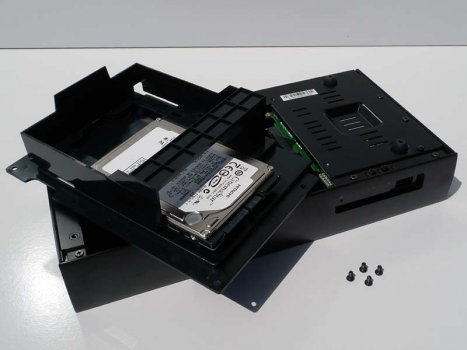 Overall, the new GUI worked but in our case at least, we reverted back to the original simple (old) interface due to its speed and general efficiency in getting to what we want to watch. Thankfully the firmware defaults to this and the GUI can be toggled with ease.

This new NMJ interface has now been baked into all A/C-200 units also but due to their near identical hardware, will likely suffer the same problems.

Deja-vu
The similarity of the ports and remote brought us to quickly notice that the specs of this new unit were identical to those of previously released A-200.

No wonder our old unit let out a sigh: The A-210 is essentially an A-200 with a new firmware (also available for the A-200) and an external makeover. The metallic nature of the makeover seems to have also removed the need for active cooling which was another minor gripe we had with the previous model.

In having seen all our iterations of the A-series to date, we have noticed a pattern. In overly simplified terms: Every x10 model seems to be what the x00 model should’ve been. The A-110 was really an A-100 with DTS decoding and a SATA HDD interface; The A-210 is really just an A-200 with a promised firmware update enabling the Network Media Jukebox and a more logical (and aesthetically pleasing) case design. 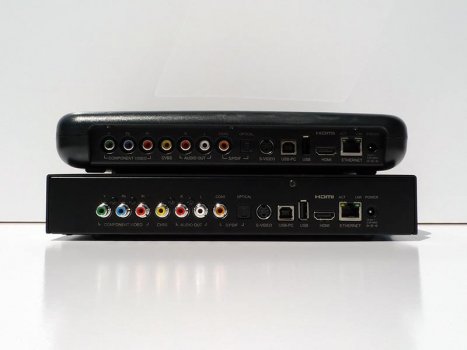 To this end, if you have an A-200 already you are between a rock and a hard place: While the new unit is arguably better looking and quieter, its actual functionality is essentially the same.

Conclusion
There’s no denying the original A-200 was hit by the ugly stick. Of course, having said this, the blow thankfully didn’t really affect functionality. Even the decision to go with active cooling/plastic case was more a spec sheet problem than a genuine issue but none-the-less, Syabas have upgraded the A-210 to what many would openly suggest should’ve been the original A-200. Nothing much has changed internally and the new NMJ features will run on both the new and old units as the hardware is identical internally, with caveats. 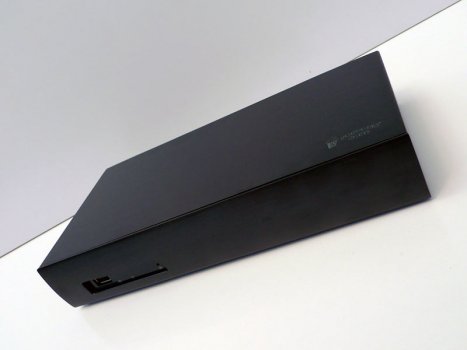 In actuality, this upgrade feels a little like the original A-100 to A-110 refresh. More of the same, just slightly more. Back then it was DTS, this time is a flashy external appearance/passive cooling.

Like the A-100 to A-110 upgrade, the A-210 brings minor improvements to an already excellent media player. If you want NMJ functionality, best to wait for the next processor upgraded revision, however. 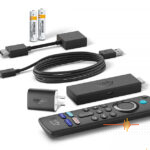