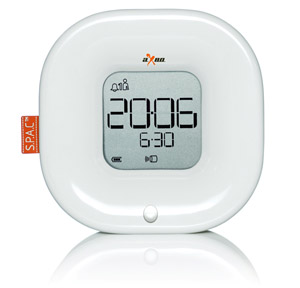 Waking up is an ordeal and a challenge for most people. Being woken up before your body is ready can be a real trauma, particularly when using alarm clocks.  There must be a better way…

My choice?  A soft kiss on the forehead from my wife or a gentle reminder from the aXbo Sleep Phase Alarm Clock. Well, that’s not really a choice, eh, but the aXbo has the advantage of knowing when it is the best time for my body to wake up.

This is how it works.

The aXbo Sleep Phase Alarm Clock is the latest in a series of alarm clocks that keep track of one’s sleep cycles to determine when the body is entering a light sleep or wake-up phase. We have reviewed the Sleeptracker before and experienced that these devices do work.
See the chart below to learn about sleep cycles.
In case you’re wondering where the name aXbo comes from: inventors Axel Ferro and Boris Eis did a lot of study into sleep-phases, REM (Rapid Eye Movements) They also co-operated with Dr. Georg Dorffner, the CEO of the Siesta Group Sleep Analysis Co. and concluded that how a person wakes up affects him or her for the entire day…

Beauty is white, square, concave and transparent
I found the aXbo far more beautiful in real life than my first impressions from the photos.
Designed by Rouven Haas of Desigment.cc,  it’s a simple, sleek creation.
If you like the iPod style you’ll love the aXbo.
Looks, however, are a bonus.  I would never buy an alarm clock based on looks alone.
The most important thing about alarm clocks is that they get you up on time, every time.  Even if the power fails.
And if they can wake you up without startling you or your partner that’s a bunch of bonus points.
And if an alarm clock does this when your body feels fully rested, I could even look forward to starting each of those new days instead of dreading those rude awakenings… 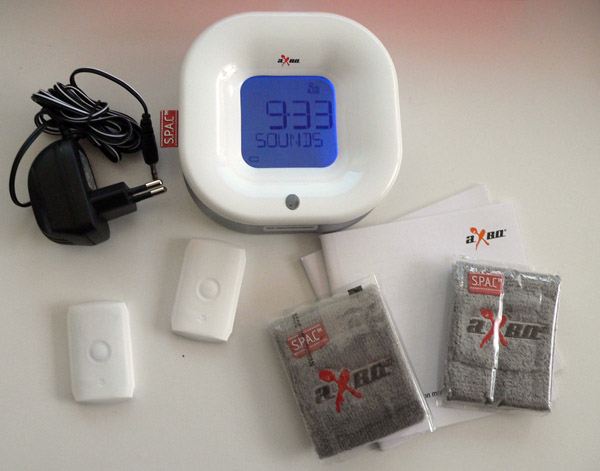 So how does it all work in practice?
The aXbo Sleep Phase Alarm Clock comes equipped with two terry cloth wrist bands, one for each partner. (Here is another bonus: the aXbo can track the sleep cycles of two people and wake them up at the best time for each!).
Inside these toweled wrist bands is a sensor to monitor the movements of each person, which is transmitted wirelessly to the aXbo.
This is different of course to the Sleeptracker where the whole unit is worn on the wrist. Now I generally dislike wearing watches, certainly at night.  The soft, 80% cotton terry cloth bands are pleasant to wear even with the fairly thick sensor in them.
In case you are worried about radio pollution: most gadgets next to your bed, like a mobile phone, would emit a radio signal of around one Watt. The aXbo is only using 0.0001 W.

One of the things I always look for when evaluating new products is ease of use.
Does it work straight out of the box or do you need to read a manual?
Most people would probably get the aXbo to work without referring to a manual.  It is fairly intuitive but there are some things you need to know to get the device to work properly.  One of these things is the correct placement of the sensor in the wrist band. The sensor has an arrow that needs to point to your hand and the wrist band should be worn on your non-dominant arm (for lefties that’s your right arm).
Fortunately, the aXbo also functions as a normal alarm clock just in case you stuff up!  But if it all works properly you set the latest time at which you want to wake up.  The aXbo will then determine in the preceding 30 minutes the optimum time for you to face the new day.  Of course you can select from a variety of sounds and volumes at this critical juncture, from jazzy, upbeat melodies to the cheerful but shrill chirping of birds.  The good folks at infactory innovations in Vienna (that’s Austria, not Australia where I am writing from) also knew that falling asleep is really the first step to having a restful sleep.  You might need a little help there too so you can select the company of crickets or the crashing of waves on an ocean shore to listen to while mumbling: “resistance is futile, resistance is futile…”
The aXbo is clever enough to know when you’ve actually fallen asleep so that the crickets can shut up and get some sleep themselves!  There are three relaxing “chill-out” sounds to choose from.
At night the display is turned off to save energy which is important when you’re traveling (the battery can last up to 10 days, but hey, if I had a 14-day vacation I’d just find a few days to sleep in…).
To turn the display back on just press the button on your wrist band or press any button on the clock.  Cool blue light illuminates the transparent display for 10 seconds.  The large numbers make it easy to see the time at night without having to put your glasses back on (I know, I know but this can be an important consideration for some folks).

Improvements
I’ve checked out the aXbo over a number of days and even though I stuffed up the first night when I fiddled a bit too much with the clock, selecting a different wake-up tune for my wife, it still woke me up at the latest wake-up time.
Let me correct myself: it woke US up. My wife is a light sleeper and even at the lower volume I had selected both of us woke up.
So here’s my question: why not implement a vibrating alarm into the wrist band sensor?  It seems an obvious solution which I had also asked the manufacturer of the Sleeptracker.  His answer was it takes too much battery power.  That may be true but I have also missed a few wake-up calls from the Sleeptracker because the volume could not be turned high enough or was muffled under the pillow.  With the aXbo it could be different as the main unit runs off rechargeable batteries. A vibrating alarm is unobtrusive for others and very effective.
Checking with the folks at aXbo confirms that the main reason for not including a vibrating alarm is the short lifespan of such a battery. They indicated a mere few months rather than the 3-5 years lifespan of the current sensors.
I’m not so sure about this. My cell phones vibrate with every call and you get easily a few years out of a cell phone battery. True, they are a bit larger too but I would be happy to replace a battery (or recharge one) every few months if that was the case…
Some people might also chide the folks from aXbo for leaving out a snooze button.
Whilst essential on standard alarm clocks it is clearly superfluous on a device like the aXbo because it wakes you up at the very best time anyway.  Snoozing is not going to help you feel more refreshed… 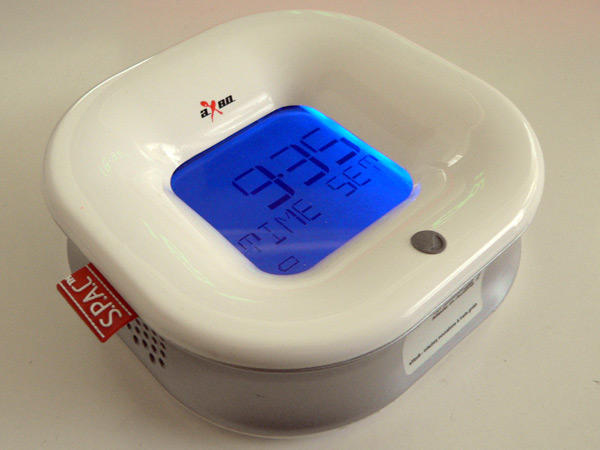 Checking Your Cycles
The Sleeptracker which we reviewed earlier has a function which enables you to check on your sleep cycles, albeit through a rudimentary readout.  The aXbo in the manual mentions that the device comes with a USB cable.  Mine didn’t nor was there any provision for USB connections because we got one of the prototypes to test.  Undoubtedly, being able to check your tossings and turnings is going to be a feature that will also be beneficial for those among us who are not masochists even though we put ourselves through torture in testing these weird and wonderful things…
Hubert Nagele, from identum communications, and who is responsible for marketing this little beauty, mentioned that all units will indeed be shipped with the USB cable. 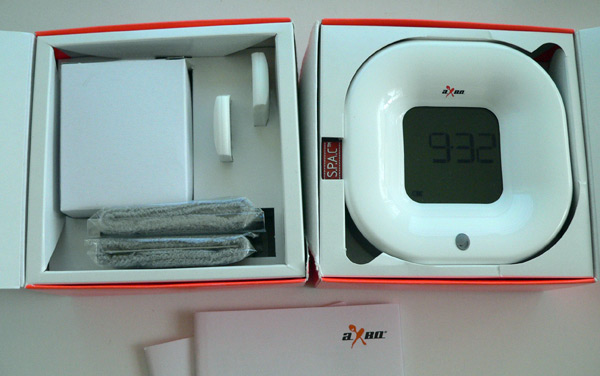 Conclusion
Considering the fact that you need to be able to put just a hair under 200 Euros on your bedside table to call the aXbo your own, this is clearly not an alarm clock for everyone.  However, if you want to feel what it is like to wake up refreshed every morning this will be one of your better investments.
Is it the ultimate in biofeedback-based Sleep Refreshment Centres? (hey, this is not just an ordinary alarm clock!)
Of course not.  I already mentioned a few improvements to make it even better but for now it is pretty darn close to being the best system in the market.