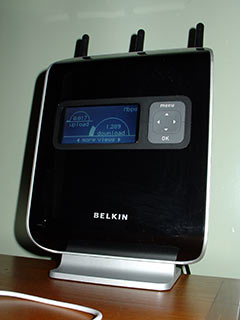 Let’s not pretend otherwise: Routers are normally pretty boring devices. The best routers tend to quietly do their job in anonymity amongst the Rat king of cables hidden away from view.

If you do happen to intentionally glance at your router, it usually coincides with the words, Why are you not working? Expletives optional.

The Belkin N1 Vision takes this truth and attempts to turns it on its head. Here is a router that wants to be looked at.

Read on to find out why..

The N1 Vision is a 802.11N Draft 2.0 wireless router with something extra: The N1 Vision has a 3" LCD screen on its front. The screen can display the time and date along with various titbits of information about your network. It can even be used to set up a wireless guest account and troubleshoot connectivity problems. 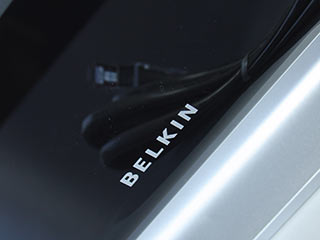 The router’s front is predominantly made up of a very high gloss black with a thin silver trim which wraps around to the rear.  Looks great next to a mid 2007 iMac. In the middle of this shininess is a blue monochrome LCD screen which has a set of rubber buttons/D-pad next to it. Atop the router are three MIMO antennas and at its rear, four Gigabit ethernet ports, along with a WAN port. The router sits upright on a dedicated stand, which while removable, strangely doesn’t seem to make allowances for wall mounting.

Along with the router itself, the N1 Vision package includes a short length of CAT5E cable, a power adapter, a quick installation guide and a CD-ROM containing the N1 Vision’s manual.

While it is easy to discuss the N1 Vision as radical because of its LCD screen, it is important to note that even without an LCD, the N1 Vision packs some formidable specifications – Not least of which is its ability to create 802.11N (Draft 2.0) networks. Some of the N1 Vision’s features are as follows: 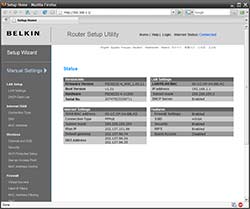 On power up, the N1 Vision displays BELKIN for a minute or so until it is ready for use. Having connected it up to my iMac (and my newly bridged ADSL2+ modem) I typed "routersetup" into Firefox and was greeted by the N1 Vision’s web interface. The interface is one of the best I have seen and within minutes I had keyed in my ISP details as well as setup a wireless network for testing. Quite painless really.

The N1 came equipped with firmware version 1.00.08 which I upgraded to 1.00.11 effortlessly. Firmware update checks are available directly from the Utilities section of the web interface and can be completely automated should one prefer it.

From a general standpoint, once up and running, the router worked pretty much flawlessly, servicing four LAN devices and one laptop (wirelesly) – with one rather large qualifier which I will discuss below.

For the purpose of testing, Belkin kindly supplied Digital Reviews with N1 Wireless Notebook cards which I connected to my laptop. This allowed me to test the full N Draft 2.0 capabilities of the router.
While the range of the router proved to be quite good, the overall speeds achieved were below those expected – even when placing the router and laptop at Belkin’s optimal distance of ten feet.

Even after enabling 20/40Mhz in the router’s settings, the N1 Vision rarely achieved speeds over 50mpbs. And this was only on an open network. Whenever I attempted to run a WEP64 enabled network the speeds dropped back to a dismal 20Mbps. I changed channels, moved equipment, chanted, waved my hands around and said abra-cadabra but the N1 Vision refused to budge. In fact, according to the Belkin Wireless Networking utility on our laptop, whenever the router was serving a WEP secured network it would only allow our N1 cards to connect at 54G.

This certainly stunted the router’s claims of N capabilities of 60-100mbps in real world environments. Despite the speed results, the N1 was very stable throughout and for the past month has suffered no crashes or general interruptions of routing.

The on-screen LCD display is by far the coolest feature of this router and considering its tested performance, it needs to be. Unfortunately it starts poorly, with the rubber buttons and D-pad used to control the LCD being of poor design and quality. The buttons frequently miss button presses and feel spongy under finger. Most of the time I had to use my nail to coerce the buttons to register my key presses. 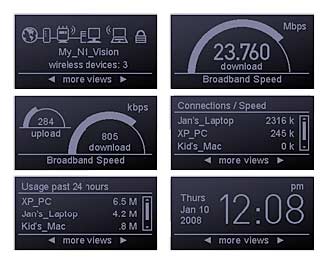 Luckily, the actual LCD feature itself fared better. The LCD has six different display modes which are accessed by pressing the right or left D-pad button. The modes are as follows:

Overview: This screen shows a small graphical display of your network, your network’s SSID and how many wireless devices are currently connected. 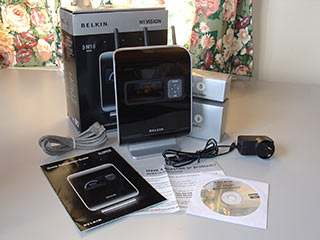 Upload and Download: This screen shows two semi-circles, displaying your upload (small semi circle) and download speeds (large semi-scircle). During out testing, this is the screen we found to be most useful, although its accuracy is somewhat questionable. In our tests, we found both the upload and download numbers to be exaggerated. Still cool though.

Live Connection Information: This screen displays which computers are connected to your router in real time and also displays how much bandwidth they are using up.

24 Hour History: Shows all the computers that have connected to your network in the past 24 hours and displays their usage figures.

Clock: Display’s the date and time, which depending on where you place your N1 Vision, can be an incredibly handy feature.

Also, when a problem occurs the Router displays information on screen. Each time my modem dropped out, the N1 Vision immediately informed me of the problem on its screen. Very handy.

In the month I had the N1 Vision connected, I found the screen to be very cool and in all honesty, I did not tire of its blue up/download meters giving me real time network information. The only real complaint about the screen is that its placement needs to be carefully considered. If the screen is too far above or beneath your eye level it becomes unreadable, like most smaller LCDs.

There is no doubt that in providing an LCD screen on the N1 Vision, Belkin are showing us the future. It doesn’t take much imagination to find more uses for the LCD – VOIP caller ID, download completion percentages or a list of IM firends online are on my wish-list. 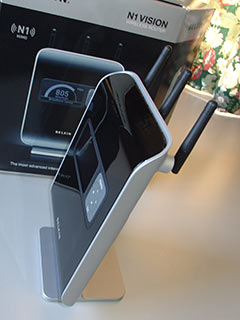 There is much to like about the N1 Vision – the idea of having an LCD screen alone is worth praise, but sadly the poor buttons and more importantly, the lacklustre wireless network speeds mar an otherwise excellent product. The idea is good but for my mind, the execution isn’t quite there yet.

Once you get over the screen (and admittedly I haven’t yet) you will wonder why Belkin didn’t provide better performance for such a pricey router. Is the price of admission worth the screen alone? Well that depends.

If all you do is browse the internet, you can safely ignore the speed issues. For browsing the internet, or communicating with current 802.11G network devices, the N1 Vision is great. If you intend on pushing a lot of data across your wireless network however, it is perhaps worth looking at a more traditional router – Until the LCD graces some speedier hardware, at least.

The Belkin N1 Vision is available now and retails for $345.95AU.