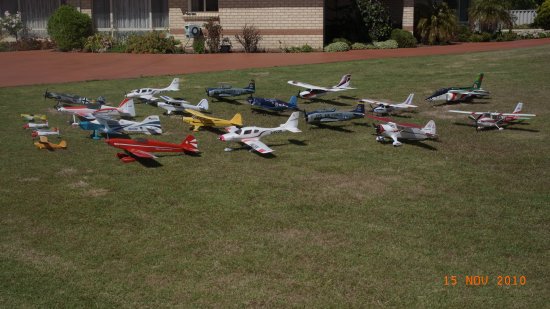 Using 21 RC planes, we have endeavoured to supply all the information that anyone wishing to buy the best Beginner’s plane, or best Intermediate/Expert plane or to just fly remote controlled planes, would wish to know. Read on to find out how all of these planes were assessed against one another over all our tests to arrive at a best RC plane selection of “Best RC Plane of the Year” for each class. 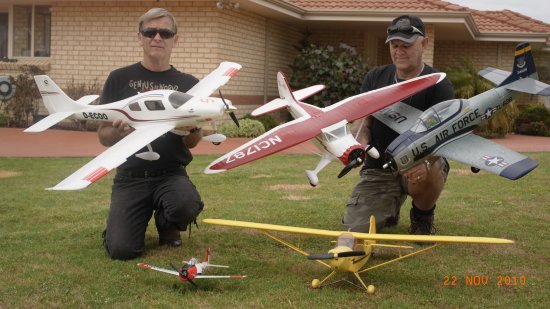 George Tadd – Absolute expert. Started flying when model ‘planes had twisted rubber bands for rudder control and throttle position was fixed. A regular model club attendee flying all sorts of new planes and is constantly requested to check and adjust the maiden flights of club planes. My (Joe’s) transition from a “constant crasher” to now being about “intermediate”, has been solely due to George’s patience and constant positive advice. His input to all of my previous reviews on this site has been absolutely invaluable and I seriously doubt that the reviews could have been done so successfully without his assistance. We will provide his valuable tips in point form towards the end of this article.

Why have we offered up the comparison grid?
Just like the concept that “oils ain’t just oils”, we have found many surprises during these reviews, mainly coming to the fore because I AM a beginner and George IS an expert. The following items have become evident:

About the Grid
Whilst we have put the total points in on each field, it may be misleading in some cases if you only look at the total as the highest points may be allocated due to the plane being more aptly suited across a range but it still may not be the best plane for a specific suitability to yourself. Look at the factors on the grid as applying to yourself in order of importance and select the plane accordingly. We have awarded the Winning planes to the classes into which we believe the planes fit, with the most versatile plane across differing fields picking up the most points for the best plane.

About the Planes
Many of the planes listed on this grid have had a previously written detailed in-depth reviews posted on this site, evaluated as we compiled the Grid. Those that have not been previously reviewed in-depth on this site have still all been reviewed in the same way that the other written reviews were done and so all 21 planes have been judged on the same basis in the grid.

All COG’s have been set as per specifications and where a battery was not supplied, we used batteries supplied by HEI Hobby Express International which were Intellect batteries of the specified discharge rate, weight, size and capacity that were stipulated for the plane.

Why these Suppliers
The plane suppliers have been given so that you may click on the link to the retail store that can and WILL supply exactly the same plane that we have reviewed. We wanted a supplier that we could use throughout the construction of the Grid and the evaluation of planes that would and could supply pretty much any plane we chose. They had to be big enough to have a supply of parts on hand so that we did not suffer undue repair delays after crashing. We also wanted to check out a MAJOR on-line bulk store and see how the similar products stacked up against your “street hobby shop” once we received them.

The Best Planes
We have made four Best RC Planes of the Year Classes for electric foam.
These are –

For us, the selection has NOT been made with price being a factor! But we have put the RRP in the grid as you may wish to let price be a determining factor of any selection you make, particularly when the suitability for what you want is close. 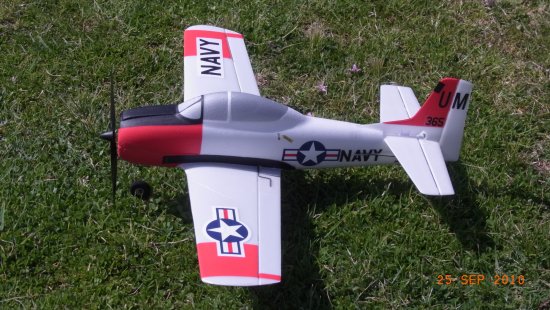 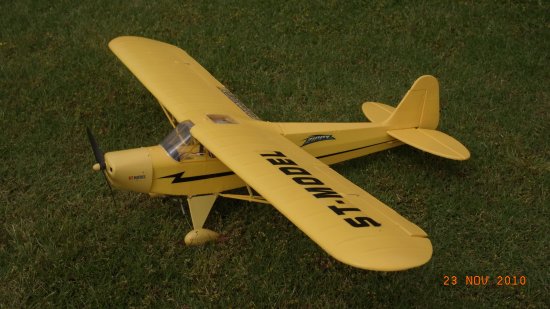 Parkzone – Ultra Micro Trojan
With a wingspan of only 16.5 in (419.1mm), the Trojan Ultra Micro is by far the most surprising plane we have tested. It flies successfully in wind speeds equal to that of far larger planes (see grid) but unlike other larger planes, it is not damaged when it goes to ground, especially if you can cut the throttle. We crashed this plane 14 times without any damage and it refuses to die.  It can be easily launched by hand or flown off from a hard surface. Landing is not difficult as it simply does not hit hard enough to damage the plane. This plane is by FAR superior to that of the Hobbyzone Champ and yet has all the good points and none of the bad. (See the in depth reviews for both planes on this site.)

Both planes in Summary –

Whether a beginner or an expert, the Ultra Micro Trojan is truly a plane you can put in the car and fly in any small spaces, anytime, anywhere. It comes with one of the best matched Tx’s we’ve seen and is ready to go, straight out of the box. This plane is by far the best/complete, versatile and progressive package that a beginner could buy and  provides the flight capability to take you through to expert.

The ST Piper J3 Cub on the other hand, is clearly the best full oval flier as it has excellent flight characteristics, slow grass landings and can still be easily seen at the end of an oval. 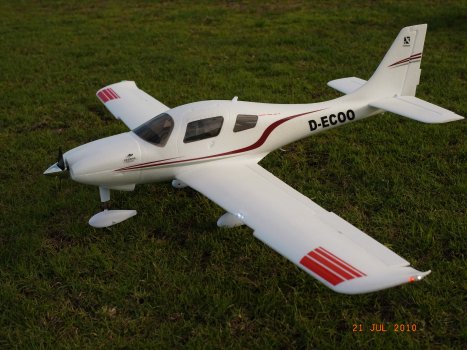 In Summary –
Overall, the Cessna is on parity with the Parkzone Stinson Reliant and we have them sharing the award but each one is better than the other in relation to windy conditions.

With a wingspan of 1435mm (56.5in), the ST Cessna 182 350 Corvalis is majestic in its flight. It lands superbly due to the light but strong construction of its undercarriage, use of flaps and sprung telescopic front wheel. Also fitted with navigation lights and significant power capabilities, this plane can fly fast or incredibly slowly. The flaps work excellently on this plane. This is the ultimate plane for a relaxing recreational fly and is sure to catch the eye of anyone watching. Its takeoff and landings are very predictably smooth and precise.  Long flight times, coupled with very easy battery access, are all part of this plane’s brilliant construction.
(Click here for in depth review) 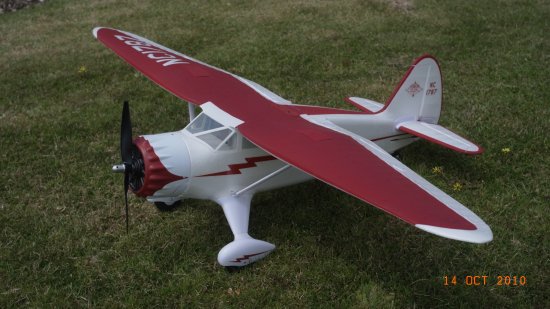 In Summary –
Overall the Stinson Reliant is on parity with the ST 350 Corvalis and we have them sharing the award. The Parkzone Stinson Reliant is clearly the best plane to fly in the more windy conditions and it’s an extremely close call to say it’s not as good as the ST 350 in calm conditions. We did not find that using the flaps helped landings. In fact, we found any of our three settings made the plane marginally “jittery” and would not advocate bothering to making them operational.

This plane is excellently built and possesses predictable gentle flight characteristics. The undercarriage is very well designed and the use of aluminum makes it very strong. Aesthetically, it looks great and the use of flaps allows it to land slowly. A little heavier than the ST 350, its strong point is the ability to fly in reasonably strong winds and yet not be unduly affected. It is clearly the best tail dragger plane we have ever landed on grass. Its takeoff and landings are pretty to watch. Very slow, predictably smooth and precise and in many cases, it was better than the majority of the tripod planes. However, on calm days the Stinson performed just under the ST 350 Corvalis due to the Corvalis’ long wings and shock absorber type front wheel.

4. Parkzone Trojan T28D
In Summary –
The Trojan T 28D is of exemplary build quality and was one of the few planes that out of the box we could not fault at all.

The wingspan of 44.0 in (1120mm) allows this plane to be easily transported and it is essentially a sports plane, possessing a reasonably mild mannered and forgiving nature to flying. Make no mistake, however, the Trojan T28 can fly fast and react very quickly to control inputs. It has a very broad capability band (see grid and in-depth review on this site) and will take off and land on grass (See in depth review on this site

Highly Commended
The Art Tech Cessna 182 Class 500 – An excellent example of attention to detail and high quality throughout as a package, with a high quality matched TX. This plane is fairly heavy and as such seemed to suffer damage to the unsprung front landing wheel. This was a minor fault we discovered within this plane and would urge the manufacturers to remedy this by some means, yet continue to stay within the parameters of scale and authenticity for the more discerning. It is perhaps the “prettiest” high wing Cessna on the market and given that this particular Cessna has a lot of detail, it certainly is a credit to Art Tech. If you are an accomplished pilot, you may well opt for this plane rather than the Cessna ST 350 as the quality is certainly there and it really becomes just a matter of personal preference as to which one you go for. We believe that as the ST 350 is lighter, has an excellent front wheel system and is subsequently less prone to damage and it suits a slightly wider market, ie closer to beginner yet covers up to the expert skill level. Something we missed in the in depth review was this – check your elevator for play as there appears to be no fulcrum anchor point on the elevator. If there is play, cut off the last bit of tail to get access and push two “U” shaped pieces of wire into the fuselage. This will stop the elevator rod from swinging out and allowing play.
(Click here for in depth review)

George Tadd’s Advice list for beginners
Whilst a simulator is fine, particularly the Phoenix (see review on this site), and certainly assists you in getting used to the appropriate stick movements so that you can make corrective control changes and do it instinctively rather than as active concentration changes, George offers the following advice:

DX8 Transmitter
This is a truly revolutionary transmitter which we simply could not fault and we selected it for use because even without a memory card, we could programme 30 planes into it. This capability allowed us to fly a number of planes within a few minutes of each other and by linking beginner (me) and expert George Tadd together, allowed us to swap back and forth at will, using the same conditions for both of us to fly in. This is a truly magnificent unit and the three rate switches, coupled with programme lock outs that we could put in, gave us the ability to tailor the planes for George and I for optimal flying for both of us at the flick of a switch. As per usual from the “guys who can supply anything”, the Spektrum DX8 transmitter was supplied to us by www.rchobbies.com.au.

CONCLUSION
We hope that by rating the planes using both a “true beginner” and an “expert”, that we have assisted you in selecting the best RC plane. The Parkzone Stinson Reliant and the ST Cessna 182, 350 Corvalis were the closest to call. But maybe you could let the price decide. Our special thanks goes to RC Hobbies for letting us run rampant in their shop of more than 80 planes and select anything we wanted from their store which we believe has the largest selection of tested planes and parts in Australia.