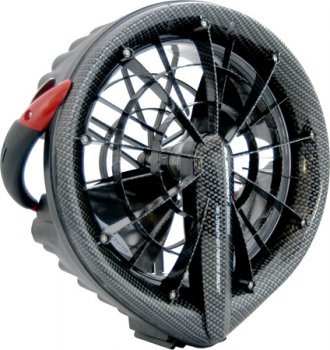 If you have done any snorkelling or diving did you ever dream of moving in the water as gracefully and effortlessly as a seal or dolphin? I know I have, particularly if I wanted to chase fast moving fish or quickly dive to a depth that you would not normally get to under your own steam.
This is the world of the Bladefish. And a Bladefish is?  you might ask….

Also known as an aqua scooter, the Seajet from Bladefish propels you through the water with a hand-held propeller. You might even irreverently refer to it as a hand-held desk fan…. How much fun would that be?

Come and join us as we snorkel and dive until we saw the dolphins becoming jealous….

Let’s first describe these SeaJet units.
The BF-5000 which we reviewed is the top of the line in the Bladefish range of sea scooters. This unit will easily dive to a depth of 40 m and will outpace sea snakes at more than 5 km an hour! I’m making that bit about the sea snakes up of course but being able to move through water at a crisp walking pace is pretty amazing. Particularly considering that walking through water is more difficult than walking on water, for most people anyway 🙂

If you ever have been around this type of device before you might remember how heavy they were, being weighed down by heavy lead acid batteries. The Bladefish weighs less than 5 kg but in the water it weighs nothing at all. Other devices, like the SeaDoo, can weigh about three times as much when you have to lug it from the car park all the way to that faraway beach! The secret is in the use of lithium ion batteries. In the BF 5000 these are 18 V batteries that will last up to 2 hours. The fast charger included in the package will fully charge the batteries within four hours but the beauty of these lithium ion batteries is that they don’t need to be fully charged all the time. You will always roughly know how much charge is in the battery, both whilst charging and when you are using the Bladefish. A couple of LED’s will show the level in 25% increments.

After the initial charge it was time to put the Bladefish to test!

Test One
Lucky for me the day turned out to be a beautiful day with temperatures in the mid-20s. Of course the seawater is still very cold on the south coast of W A at this time of year but that did not deter us. Neither the fact that only a few weeks before a great white shark attacked a couple of kayakers in the very same spot we had chosen for our test drive.…

The weight of the BF 5000 was hardly felt on the walk down to the beach and the first thing we tested was the buoyancy. Near neutral is a good description as it will float quite happily. Officially it is slightly negative buoyant but italso comes with two small floats which attach to the handles for extra buoyancy when you are snorkelling. Youwould remove these of course when you go scuba-diving. The main thing is to make sure it doesn’t get flung out of your hands when you are negotiating big waves so it might be wise to attach a cord to it. Just above the two handles are two paddles. Click both of them once to switch on the unit and you can regulate the speed on this top model in three steps with the right paddle. The Bladefish requires a two handed operation, both for safety and comfort as well as manoeuvrability.

What followed was probably the most fun I’ve had testing out a gadget in a long time! Using the Bladefish is very intuitive and when you pretend to be a seal you will develop all the graces of one when you steer the Bladefish around the coral. Soon my wife indicated that she wanted to join in the fun and we were both hanging off the BF 5000! Yes, this seajet has enough power to pull us both through the water….

What happens when the proverbial hits the fan? In this case it was a bit of seaweed which blocked the fan and immediately the Bladefish stopped. I shook off the seaweed and continued on. The two hours of battery charge is plenty for most seaside frolicking and if you bring the charger you can always plug it into your car’s cigarette lighter via an inverter for a quick recharge. 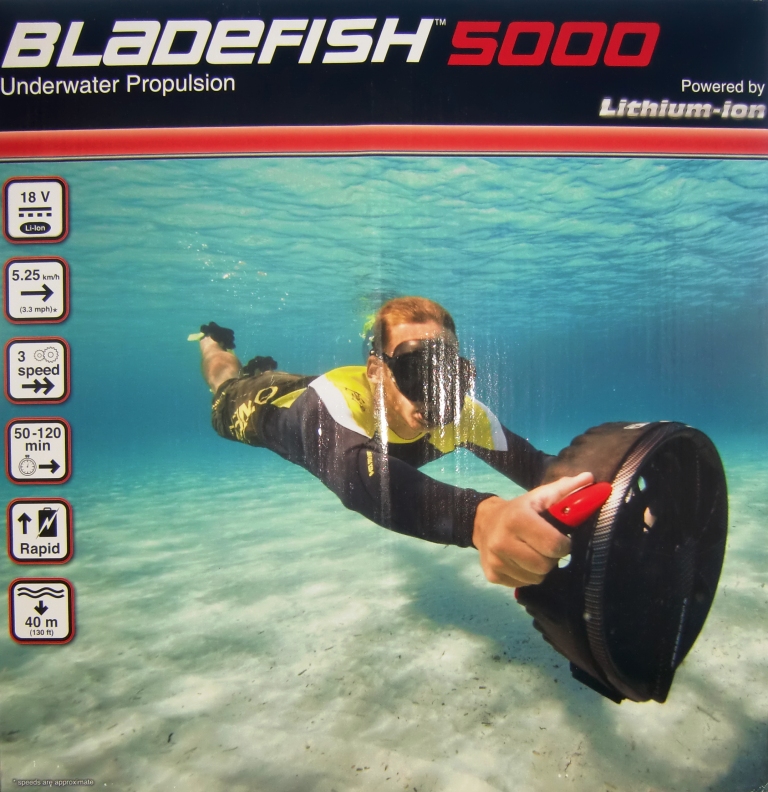 Test Two
After we had our fun we gave the unit to a good friend of ours who has extensive diving experience and once owned one of the earlier heavyweight models.

These are his findings:

With my 40 years experience of swimming, snorkelling and scuba diving under all sort of conditions, often in depths up to 60 metres and 15 km offshore, I found the Bladefish to exhibit the following pros and cons:

Pros
* Easy to operate and little training required.
* The required two handed operation, whilst a reasonable safety feature, doesn’t allow you to fix a tow link between the machine and your belt which reduces the pull on your arms and also allows one handed operation, as well as ear equalisation as you “duck dive” by holding your nose.
* It is light and very portable, making it ideal for snorkelers particularly where you want to cover a lot of territory without much effort
* Battery life is very good
* Has slight positive buoyancy at water surface.
* Strong construction with minimal items or protrusions to get damaged
* Strong on safety aspects
* Good compact size as a Scuba accessory

Conclusion
The Bladefish BF5000 is probably the best of the bunch of sea scooters. Normally we rate our gadgets on easily measured features, such as a build quality, ease of use, value for money, etc, but in this case we also need to include another category: fun.

Ultimately how much fun you have with this type of device is what counts the most.

The Bladefish range of models all share the same basic characteristics as far as build quality is concerned but the BF 5000 is easily the best selling model despite its price of $1100. That sort of money will give you years of good clean (and wet) fun. We can highly recommend this unit if you spend a lot of time diving and snorkelling. There is only one downside with the Bladefish: you don’t get a lot of exercise of swimming…. But maybe that’s also the whole point of getting one of these sea scooters!

We received this unit courtesy of Oceanic Diving Australia who provide more than just sea scooters. Do yourself a favour and click on the banner below for a great video of the Bladefish in action.