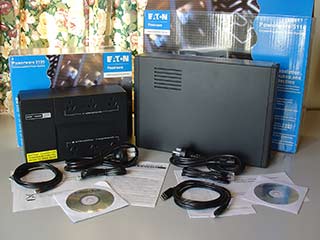 As our digital lives increase in importance and volume, so too does the risk – and cost – of losing the data that makes it all possible.

While keeping up to date back-ups and storing your data in RAIDs is a good start, it all means nothing without an adequate supply of power – Especially during a power outage when critical equipment needs to be shutdown to avoid data loss.

Eaton’s range of Uninterrupted Power Supplies (UPS) aim to provide this power and with it, peace of mind.

Read on for our review..

To this end, the two units reviewed act in very similar ways, with an increase in power rating (backup time) and greater line protection qualities separating the two.

Aimed at home office users, the 3105 prevents power surges and sags from affecting your PC and peripheral equipment, providing enough battery backup to shut the average PC down in case of power outages. 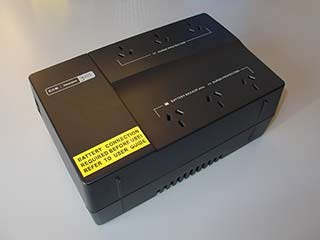 The 3105 is a solid piece of equipment and the build quality is excellent. The unit is 11 x 28 x 18cm and weighs 7kg. Three of the unit’s six power outlets are able to supply emergency power from the user replaceable lead-acid free battery.

The 3105 tested is quoted as supplying three minutes at full rated load (400W) or around nine minutes at 200W – More than enough for the average home office setup. A USB port is also incorporated into the side of the unit to communicate with your PC and let it know the power has been interrupted and importantly, get the shutdown process underway. 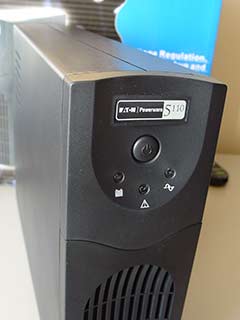 With a larger battery, the 5110 also has better emergency performance, able to provide 600W of power for five minutes or 8 minutes at half load (300W). The 5110 is physically larger than the 3105 with dimensions of 9 x 38 x 27cm and a weight of 13kg. Both units come standard with an A-B USB cable, power cable, a short length of twisted wire pair, a quick-start reference, a brief manual and software on CD-ROM. 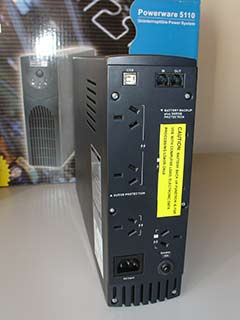 Installing the included software via CD-ROM on my Windows XP PC was fairly painless – barring a few anxious moments when the unit refused to be acknowledged by the OS. After power cycling everything, Windows XP came to the party and the bundled LanSafe software came to life.

The LanSafe software is functional but wholly uninspiring from a GUI standpoint – and was rather sluggish during tests on our Athlon XP 2200+. Despite this, in lieu of native OS support, the software adequately controlled the Powerware UPS. Beyond accepting power outage reports from the UPS (and initiating subsequent shutdown/standby events) the software can also identify and record the times and dates of power outages through graphical calendars and event logging.

While the power in my area is generally poor, it is no small irony that even during a recent bout of storms, no genuine power outages occurred to authentically test the Powerware equipment. In light of this, I conducted a number of simulated power outages, consisting of me physically switching off the power from the wall.

Upon detecting a power outage, the UPS beeps and flashed a green LED so that if you are around during such an outage you can take over. Left to its own devices however the software proved to work well. In each test, the UPS adequately provided enough power and the LanSafe software successfully instructed the PC to power down.

These UPS have no official OSX support. 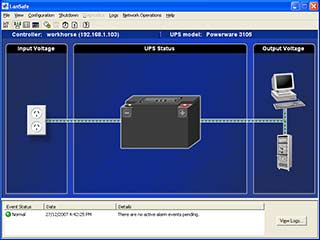 While DigitalReviews is not in possession of electric line testing equipment, all appliances plugged into the UPS devices appeared to work without problem.

In simulated power outages, both units were able to provide adequate power to all equipment connected and from a strict power supply standpoint, both worked flawlessly. Despite this, I did not like that the units were not natively supported by Windows XP SP2. The bundled LanSafe software, while adequately controlling and monitoring the units, did not make up for what I believe should’ve been native OS level support.

In discussing this issue with Eaton, they said that native OS support is something they are looking at improving upon in the future.

For more information about these devices, including where to buy Eaton’s Powerware range of UPS devices and a handy UPS selection tool (to find out which UPS best suits your needs) visit the Powerware website.

Further Testing on the Powerware 5110

The 5110 was subsequently shipped to our Editor for additional testing under Vista as I concentrated mainly on the 3105.

Here are a couple of additional comments from him:

Paul’s experiences on the software implementation were not altogether encouraging and I had initially very similar problems in the unit not being recognised by the LanSafe software.

I had downloaded the latest Vista drivers of course as well as the Vista version of the software. Still no joy.

A call to the Powerware people at Eaton.com here in Australia proved to be the saving grace.

Robin was extremely helpful and, more importantly, very knowledgeable about the products they sell. This is crucial for customer satisfaction. Robin patiently guided me through the process and we got it all working perfectly.

Like Paul said: plenty of time is available to gracefully shut your desktop down. I’ve got both a Vista Core Duo machine and 24" Dell monitor plus 60W satellite modem for a load of around 35%.

I also have my old XP test platform with CRT plugged in the surge-only outlets. The same with my Panasonic cordless phone and digital TV tuner.

So you can see, there’s plenty of outlets available to accommodate most of any small business needs.

An aspect that most people tend to forget about when it comes to UPS solutions, is that in addition to providing shutdown backup power so that you don’t lose data with a power failure, these units also filter the power surges and any brownout situations.

How important is that?

My power supply can go up to 249.2 Volts. That’s about 10V higher than the average power we have here and 30V higher than some of the units that are rated to just 220V.

Major power fluctuations are disastrous for any equipment and especially electronic gear.

That’s why, if a computer is essential for your business of home life, you need to consider a UPS.

Considering that both the 3105 and 5110 have been out for a while, I would have expected the software aspect to have been resolved so that most people would not have to make a call to Support. 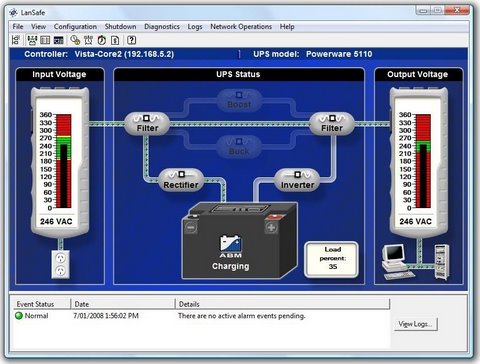 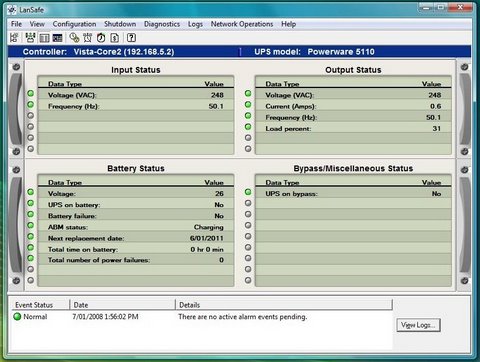