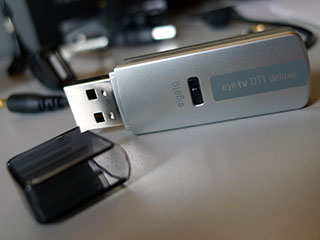 The Elgato EyeTV DTT Deluxe is an impossibly small High Definition digital television tuner for the Apple Mac. And for the past month or so, we have had it connected to our unibody MacBook Pro for some portable free-to-air viewing.

Along with the tiny USB stick that is the EyeTV DTT Deluxe, the Elgato package contains a bunch of accessories – Accessories that other manufacturers might consider to be optional extras.

To start with, the EyeTV DTT Deluxe package contains two DVB-T aerials – a small telescopic aerial, as well as a larger tilt/swivel one. The larger aerial comes complete with a small magnetic suction attachment which allows it to be stuck to windows or other similar surfaces. An IEC-MCX aerial adapter is also included which allows the DTT Deluxe to be connected to any standard coaxial aerial (internal or external via wall plug). The package also contained an infrared remote control (with batteries), a small USB extension cable and a CD-ROM containing the EyeTV 3 software and product manuals. Accompanying all this was the usual quick start guide and light smattering of product cards.

SO WHERE IS THE TUNER?

While the package is quite small, the actual EyeTV DTT Deluxe is positively minescule. At 55x17x7mm the actual tuner is quite literally smaller than many USB flash memory sticks. And with its stylish silver finish and neat grey labeling, a cursory glance would have many believe that is all it is. The only real giveaway is the small golden coloured MCX aerial port located on its outer end. When not in use, the DTT Deluxe’s opposite end has a neat translucent grey cover keeping the USB port protected.

SETTING UP AND TUNING

After plugging the DTT Deluxe into a free USB port (and connecting the telescopic aerial), I inserted the included EyeTV software disc. Installation was simple. After entering my location – Australia – up came a blue window with an ominous "No Channels" label. We skipped the 3 months free IceTV subscription and hit the "Autotune" button (with exhaustive search ticked for good measure) and waited. About 10 minutes later, a total of zero channels were found. Hmm.

Having had little success with the telescopic aerial, we connected the ever so slightly bulkier tilt/swivel aerial. After another ten minutes searching for channels, we again turned up nothin. Hmm.

When all else fails – go to the rabbit ears. Using the included IEC to MCX adapter, we rummaged around for our $10 special internal antenna, crossed our fingers and re-ran the channel search.

Success! The Autotune found 25 channels (including four radio stations). That’s more like it!

After a quick look at all the channels, everything looked okay so we re-connected the original aerials to see if they would give us a bit more joy now that the hard work had been done. To put things in perspective, our main testing location is approximately 20km (line of sight) from the Melbourne transmission towers. From this location, the telescopic antenna refused to pick up any signals whatsoever, indoors or out. The tilt/swivel antenna, however, was slightly more successful in that it managed to pick up one channel (SBS) from this location.

From our second testing location – approximately 8km from the transmission towers – the magnetic aerial worked perfectly but the telescopic aerial only managed to pick up SBS.

While the tilt/swivel antenna’s ability to pick up channels was better than the telescopic aerial, the overall performance of these included aerials was, considering the distances from the transmission towers tested, disappointing.

The cheap pair of rabbit ears, however, worked perfectly from both locations and it is these that we used for the bulk of our testing.

While it doesn’t stand up to our Pioneer Kuro reference set, watching TV on the MacBook via the EyeTV DTT Deluxe was quite enjoyable. Without getting into the glossy versus matte debate, we thought the general image quality was clean, sharp and very watchable. Too watchable at times, if the tardiness of this review is anything to go by!

The included remote worked exactly as you would expect a regular TV remote to work and despite its simple look and feel, it got the job done. Along with the the obvious volume and channel buttons, the remote control allowed access to a number of other handy features: The green button maximizes the video display, the yellow opens up the Recorded Programs interface, and the blue button toggles the software remote control’s visibility. Teletext and the pausing, rewinding and fast forwarding of live television are also accessible from the physical remote control.

"Fast forward TV?" I hear you ask Okay, so you can’t fast forward live TV – until you have rewound it, of course. The DTT Deluxe cleverly automatically records what you watch so you can go back and re-watch it. Once you are done reviewing this recorded content, you can fast forward right up to "live" television. Beyond this, you can record digital TV broadcasts permanently with one touch of the physical or software remote.

These recordings can be accessed via the iTunes like "EyeTV programs" software which allows you to organise, watch and export your recorded content. The software can be set to record content via programming guides (subscription required for most channels) and also by manually setting the recording start and stop times. Clicking on a program in the episode guide will allow you to add it to your recording schedule. Too easy.

If this wasn’t easy enough, the EyeTV Programs software allows your recordings to be easily exported to iPod, AppleTV or to Toast with a simple right click.

Overall, the interface of the EyeTV Programs software, coupled with the excellent software remote was very intuitive and a cinch to operate. While we are fairly experienced with using a cornucopia of software, we would go out on a limb and say that the EyeTV software, when coupled with the EyeTV DTT Deluxe, is about as easy to use as it can get.

The remote control worked well at living room distances, provided it was pointed in the general direction of the DTT Deluxe stick. It’s operating angle was good and the only real complaint we had about the remote was its general look and feel didn’t match the rest of the packages high quality contents. If only Elgato could manufacture a physical version of the software remote!

Other things we noticed during testing were that when in operation, the actual DTT Deluxe unit gets quite hot – much hotter than the top of our MacBook Pro gets. While it is not burning hot, it is hot enough to be worth keeping an eye on during extended viewing.

Also, on a positive note, when connected to a unibody MacBook Pro, the DTT does not get in the way of any other ports, allowing you to use both the firewire and second USB port whilst the EyeTV DTT Deluxe is connected.

And for the record, our 2.53Ghz MacBook Pro had no issues decoding, recording or playing back Australian HDTV 1080i broadcasts.

Over the course of our testing, we found the EyeTV 3 software to be very stable and when coupled with the EyeTV DTT Deluxe connected to rabbit ears, pretty much flawless: Watching standard definition and high definition TV, as well as scheduled recording all worked without problem.

We appreciated the number of accessories included in the package, but the lack of signal when using the telescopic antenna was disappointing, even under the veritable nose of the transmission towers. While the tilt/swivel antenna worked well at this range, its operation further out was much the same as the telescopic one.

Of course, the flip-side is that with a cheap pair of rabbit ears, the EyeTV worked perfectly. While this is a small expense, it does come at the cost of portability, as even a small pair of rabbit ears is gargantuan compared to the EyeTV DTT Deluxe or even the included Elgato antennas. The physical remote could also do with an upgrade, but its otherwise functional.

If you can get past those two flaws, the excellent included software, overall ease of use and excellent functionality makes the Elgato EyeTV DTT Deluxe a great way to get TV onto your Mac.

The Elgato EyeTV DTT Deluxe is available now from Elgato and costs $79.95Euros. 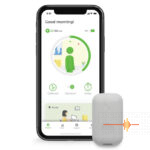