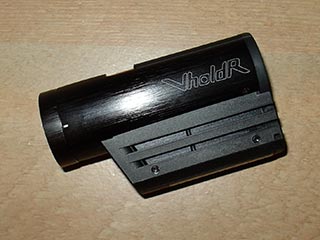 Aimed at extreme sports enthusiasts, the VHoldR is a compact video recorder which is small enough to fit into the palm of your hand, rugged enough to strap to the side of your car or bike and able to deliver 30 frames per second of VGA video.

Read on for our experiences with Twenty20’s VHoldR.

When you take the VHoldR out of its packaging two things become immediately apparent. One is its incredibly small size and the second is its rugged finish. It is cold to the touch and while it is fairly light at 105g, the metal barrel feels solid in your hand.

The VHoldR is a 95mm long, 53mm high and 34mm wide. The unit is basically made up of a metallic cylindrical barrel with a plastic mount featuring Twenty20’s unique Trail Mounting System. On the top of the unit is a slider which allows the user to easily start/stop recording. The rear of the VHoldR consists of a durable rubber flap which slides down to reveal the unit’s internals. The unit’s power button is accessed by pushing on this rear flap and via two small windows, are two status LEDs. Upon opening this flap you will find a MicroSD slot, removable lithium polymer battery and a micro USB port. 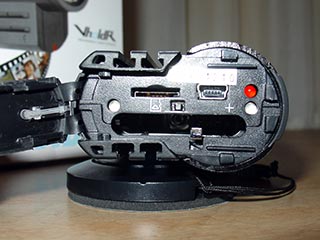 The unit is equipped with a 3.2mm wide angle lens which is able to rotate 192 degrees to adjust to whatever mounting angle it is on. The flat surface mount included is both sturdy and durable. Additional mounts can be purchased and come in various designs for particular uses: Handlebar mounts, Goggle straps, etc. We found the flat surface mounts to be pretty universal and good for a variety of mounting positions. The mounts are backed with 3M mounting tape which has proven to be sticky enough to survive our lengthy testing regime: For the past few months I have had two such mounts stuck on my car and neither have made any signs of coming lose – even the one hanging upside down! 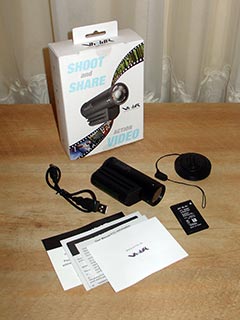 Apart from the unit itself, the retail VHoldR package includes a Desktop Software CD-ROM, the aforementioned flat surface mount, a USB cable, a battery and the customary quick start paperwork. No formal manual is included, but a link to the most recent online guide is listed for those keen to read before they play. Twenty20 included a generic 2GB microSD card in our package as well as some extra flat surface mounts. It is worth noting that the current retail package includes one surface mount only and a 1GB MicroSD card.

We left the VHoldR on charge overnight, tethered to our PC via the included USB cable then set off the next morning ready for filming. The unit’s operation is fairly simple. After inserting the battery and microSD card – more on this later – we closed the rear flap and pressed the power button for a good few seconds. Soon after the VHoldR was alive with its LEDs lighting up. A few seconds later the unit emitted a loud beep – which is the VHoldR’s way of telling you it is ready for recording. 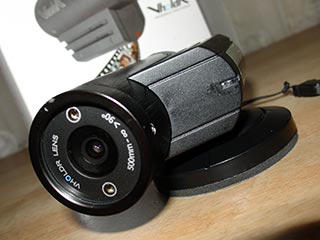 While the unit has status LEDs at the front and rear of the unit, it also features two red lasers around the lens. These lasers shine a beam which help you work out how far to rotate the lens to level the shot. In our tests we found this feature invaluable in setting a level shooting frame – particularly for our side mounted car shots.

Once turned on, you merely have to slide forward the start/stop recording switch (located on the units top) to start recording. After a second or two of sliding the switch forward, the unit emits a long beep. The VHoldR is now recording. To stop recording, the switch is simply slid back to its original position – resulting in two beeps which signals the unit has completed recording. It’s literally that simple.

Update: The Hill Climb video above has been uploaded on the Twenty20 VHoldR site, and can be viewed here. At the time of this update, the video was unavailable, so we have embedded it via YouTube.

To power down the unit, you once again press and hold the rear button for two seconds. All in all, the process is easy to use and the units design means that when mounted and turned on, the VHoldR can be operated with one hand – I would venture to say that even a gloved hand would suffice. Handy for some of the more extreme things the VHoldR is designed to capture. I’m sure.

To test the recording capability of the VHoldR we mounted the unit on two points of our car and went out for some spirited driving on some local B roads. Using the BBC’s Top Gear as a guide, we placed one mount under the front spoiler and the second on the lower three quarter panel just behind the door – facing rearwards. While we only had one VHoldR, we interchanged the cameras position from run to run to record video for the review. The resulting videos were then mixed together using freeware, VirtualDub.

Generally speaking, the camera operated well in both wet and dry conditions and even in rain the VHoldR produced a decent image. We did find, however, that the VHoldR didn’t particularly enjoy the hard suspension of our vehicle when it was mounted beneath the front spoiler. Video from this vantage point often became corrupt and only some surgery in VirtualDub salvaged the footage. Our theory is that the vibrations would somehow turn the VHoldR off prematurely resulting in a corrupt file from switching off ungracefully. We got on to Twenty20 and they suggested that the unit may have been faulty and they shipped out a replacement unit. Under similar – very near identical – test conditions, the new unit operated without the previously exhibited problem.

Unfortunately, the new unit was unable to solve the one thing that we found particularly disappointing: The quality of the audio recording. The car we used for testing has a beautiful engine sound and the VholdR would have none of it. No matter where the camera was mounted, the audio was always heavily garbled from wind noise noise or plain loudness. Even when mounted inside the cabin, the audio was unclear and generally unusable. Desperate to get some kind of usable audio, we even attempted to tape up and cover the microphone to dampen the sound but were unable to make any real improvement.

While the audio was quite poor, we must say that it did improve when we listened to it on something other than our tiny laptop speakers. When we played back the video via our home theatre setup – that Popcorn Hour is really quite versatile! – The sound did improve a little. Running some filters on the VHoldR’s recorded audio might improve it, but we can’t help to think that Twenty20 could’ve done a bit more to improve the audio quality natively.

While not physically part of the unit, the WEAR SHOOT SHARE tagline implores us to discuss the ease in which you can share your videos online. While the videos you create can easily be uploaded to YouTube – or any other Internet video repository, Twenty20 actually have their own video sharing website. While it is easy to use, we did find that the processing time to be rather long: 16 hours and counting. Perhaps the videos are processed manually and as it was uploaded on a weekend, the video may not come online until Monday. Hopefully the video will have been processed by the time this review is live.

Creating an account at VHoldR is free and easy. Once signed up you can upload your videos, give them titles, comment on them and tag them with geographical and other data. Uploaded videos can be then shared via email/URL/DIGG/Del.icio.us/etc. or embedded.

Please note that when watching the videos included in this review, they are not presented in the full 640×480 resolution that they were recorded at. Both the VHoldR and YouTube convert the videos to lower resolutions as part of the uploading process.

Along with using the web interface, the VHoldR comes complete with a CD-ROM. Curiously, the CD-ROM autoruns by prompting you to download the VHoldR software for the website, rather than install it from the CD-ROM. Once installed, the software works well for directly uploading from your VHoldR but isn’t really geared towards those who wish to edit their videos prior to uploading. Try as we might, we found no way of inserting our VirtualDub edited videos into the VHoldR software gallery. To this end, the software is fairly basic and acts as a mild extension of the web based interface. One thing we really did like about the software, however, was that it provided an easy way to check for VHoldR firmware updates.

The VHoldR is a competent little unit which looks and feels like it will survive some fairly tough knocks. While our first unit did not ultimately prove to be as resilient as we first thought, our second unit performed perfectly. Furthermore, our understanding is that our second unit was a slightly updated model which is (as of the time of writing) the version currently available for purchase.

The audio and video generally stayed synced in our test videos but it did occasionally go amiss. The microphone on the unit was unable to cope with loud noise (wind/engine noise) and we hope Twenty20 can release a firmware update to try and solve this problem. Alternatively the ability to use an external microphone might improve things in this regard.

Overall the VHoldR rates a solid 7 out of 10, losing marks for its inability to cope with loud noise but gaining marks pretty much everywhere else.

The VHoldR is available for about $350US. For more information about this unit and where to purchase one, visit Twenty20’s VHoldR website.

*For the more observant, you will notice that the hill climb featured in one of the embedded videos is actually the very same route taken during our Travel Recorder Nano review, albeit on a different date.