The hField Wi-Fire long range antenna has received some attention in recent times here at digitalreviews.net.

With Windows Vista support hot off the press, the good folks at hField have very kindly provided a unit for our evaluation.  Thanks guys!

So just how well does the Wi-Fire live up to the claims?

The Wi-Fire design is a cross between utilitarian and industrial with its monolithic grey and black colour scheme, chunky wedge square directional antenna and full size USB connector on both ends.  There is nothing discreet about this unit at all, it practically screams wireless antenna.  The device feels solidly built without flex in any of the joints.

In a word, breezy.  The software installation was smooth as silk and took less than 3 minutes.  The drivers were signed and no reboot required on my Windows XP testbed.

The driver disk that was shipped with the unit matches the version available on the hField website at the time of writing.  It is interesting to see that the Wi-Fire installer package is less than 5 Mb in size, and the size on disk for the Wi-Fire Connection Manager is under 500 kb!  It is refreshing to see as another very well-known chip manufacturer post a 100 Mb installer file for their wireless chipset.

The Operating System support list is now Windows XP, Windows Vista, MacOS 10.3 and up including 10.5 "Leopard".  An errata on the preview here <https://www.digitalreviews.net//news/industry-news/hfield-wi-fire-antenna-now-supporting-vista.html>, the new Wi-Fire Connection Manager 2.0 is a completely revamp utility built from the ground up.

The Wi-Fire Connection Manager consumed a skinny 6 Mb of precious memory when resident in the system tray.  There is no Windows service requirement and functions independently of other wireless managers.  I did not find any conflict or compatibility issues between the Wi-Fire Connection Manager with other wireless configuration managers already installed on my machine. 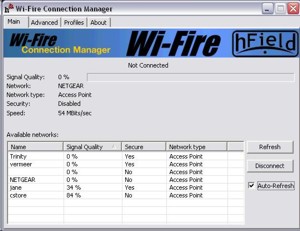 As with all things wireless, mediums such as solid walls between the transmitter and receiver greatly affect the signal strength.  All the tests in this review were conducted under less than scientific conditions as I live in a very heavily populated area.  It is pretty much impossible to obtain a clear line of sight for any substantial distance.  In fact I would be lucky to walk 5 metres in any direction without meeting multiple brick walls.

However, a dash of resourcefulness goes a long way.  I took a baseline measurement at my local cafe that has a wireless hotspot running.  Whilst I did not know the exact location of their access point in the building structure, I determined the location of the strongest signal from outside the cafe and started walking away.

The Connection Manager interface is clean and simple to use.  By ticking the auto-fresh box, I can rotate the antenna and watch the screen updates to determine the antenna position for the strongest signal for my chosen wireless network.  There were a lot of wireless networks in my area, and the Wi-Fire picked up a lot more than my internal chipset.

Based on my rough testing, I could easily continue to access wireless internet from about 220 meters away from where the access point is physically located (as calculated by Google Maps).  At this range, it did require a bit of tuning with the directional antenna before I could successfully pick up the signal.  At the same time, my internal chipset did not even see the particular SSID that I was looking for.

Whilst this is about 80 meters short of the maximum range of the Wi-Fire claimed by hField, the numerous houses between myself and the access point would have contributed to the reduction in range.  It was good to see that the Connection Manager still reported 10% signal strength and I could still surf the internet, albeit at a lower connection speed.

Significantly, the Wi-Fire did not reduce the battery life of my notebook.  I had the same amount of time on battery using my internal chipset as I would with the Wi-Fire, with the same utilisation pattern. 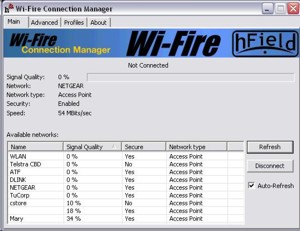 A few minor gripes in what is otherwise a quality product that meets expectations.

The Wi-Fire Connection Manager screen cannot be resized which makes it a little difficult to see all the details in the advanced tab.

The screen clip is next to useless.  I tried it on notebooks of different makes but there is just no way to keep the thing from sliding all over the place if you happen to be on the move, particularly when the retractable cable hub is weighing down on the antenna.  It works perfectly fine as a desktop stand and the cable length is more than decent.

I also found the antenna swivel a little too easy to swing around, I had a lot of problems during my outdoor test run when there were gusts of breeze.

My suggestion is that hField change the USB connector on the antenna side to the mini USB version.  The current full size connector is awfully chunky.

Conclusion
Apart of the size of the antenna, I was really pleased with the ease of installation, the resource footprint and the overall performance of the Wi-Fire.  Unfortunately I was unable to test the maximum range of the Wi-Fire, but the testing I could perform shows significant improvement over the built-in chipset on my notebook.

The Wi-Fire gave me unprecedented freedom within the ability of the unit.  I could, for example, sit at my corner cafe and be connected back into my own secure wireless network down the road instead of using their open hotspot.  For me just having the extra security of using my own access point would be worth the price alone.

The hField Wi-Fire is available for USD$79 from here.