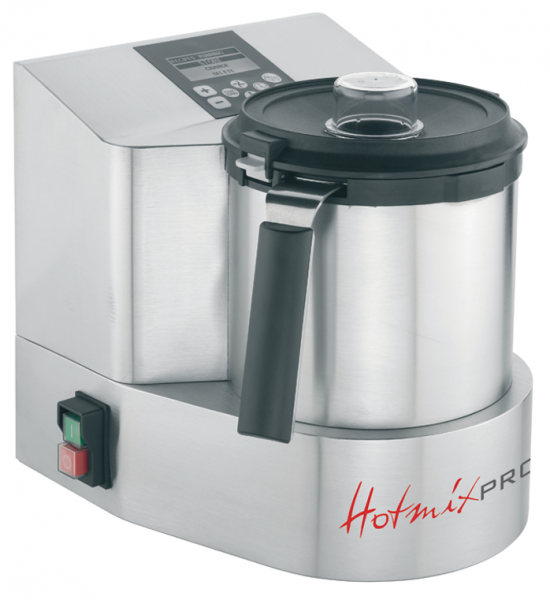 We have done a few kitchen appliance reviews over the last couple of years but we are always on the lookout for the ultimate kitchen tool that even a Chef cannot do without.

In fact, when we came across the Hotmix PRO in search for the best all in one machine to grace your countertop, this particular appliance is indeed created specifically for commercial use.

But my question is: would there also be a market for the Hotmix PRO in households where people take their cooking seriously? Yes, I’m looking at the Thermomix crowd…

So let’s look at the Hotmix PRO from these two different angles.

We have a Chef on our team who has owned her restaurant for nearly a decade and knows what the requirements in a commercial kitchen are. And at home she takes her love for cooking to new levels and is constantly experimenting, trying out new recipes, especially those that are allergy friendly.

Important to note is that this particular “Gastro” or “gastronomique” model is a member of a much larger Hotmix PRO family. Australians have the unfortunate habit to abbreviate just about anything that has more than two syllables and the “Gastro” moniker is luckily not indicated on the outside of the machine…
They are all premium machines and carry a premium pricetag but you can start with the Easy model which, pricewise is in the Thermomix territory, and scale up to machines with larger bowls and even with the capacity to cool down to -24°C! (Great to make ice cream from scratch, so it’s worth checking out the entire range.)

It’s a powerful and versatile machine: a 1500 W motor can rev things up through 26 settings to 12,000 rpm. At super high speeds it’s also very balanced and doesn’t threaten to dance all over your countertop. You can set the temperature, stepping up degree by degree all the way up to 190°C. These high yet precise temperatures are ideal for caramelisation and confectionary and the low gentle precision is ideal for tempering chocolate or that failsafe hollandaise. It’s even possible to do ‘sous vide’ with the precise settings.

There are a couple of good things to notice about the bowl setup. First off, it is a 2.6 ltr bowl (2 litres usable) within an enclosure so that the outside is never hot to the touch. The lid has probably the best securing mechanism around and taking the blades out for cleaning is a cinch. You might find it handy as well that you can have the handle either on the left or on the right of the bowl enclosure. The minus point is that the shape of the bowl is rather narrow at the bottom, making sautéing less than ideal compared to the Thermomix or ThermoChef machines. 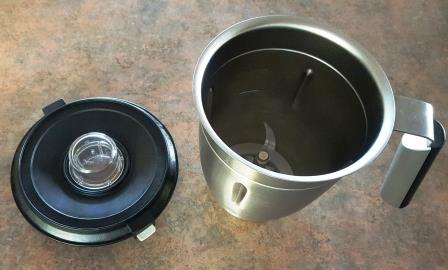 One thing that I initially missed on the Hotmix was the ability to weigh ingredients on the machine itself. Both the Thermomix and the ThermoChef have that and it can be a good feature to have. Most commercial cooks seem to prefer to weigh ingredients separately and it’s not a big thing. It’s the same with not having the ability to reverse the blades. It would be easy to implement such a feature in the manufacturing process but, generally, a sous chef can do without it. (Update: just learned that you can stop the blades altogether by setting the speed to 0)

Probably one of the handiest aspects of using the Hotmix PRO is that you can use the inbuilt recipes that are stored on an SD card. You put in the correct ingredients and walk away without any further intervention until the job is done. And if you are very creative there is an app that will allow you to input your own recipes (note: that particular app requires a very elementary knowledge of Italian as the installer is written in that language… Or you can take a few lucky guesses and just hit the enter button! The actual app itself is in English).

We are always looking at how easy it is to use an appliance. I doubt there are many Chefs who are going to sit down with a manual to figure out how things work. The interface has to be self-explanatory and fortunately, that is the case with the Hotmix PRO. That doesn’t mean that I did not have a good look at the manual but all the basic functions can easily be found.

It is handy to either print out the Index of functions and recipes or even better, just allocate an old tablet for that role. In our case we still had a spare android mini tablet lying around which is perfect for kitchen use. 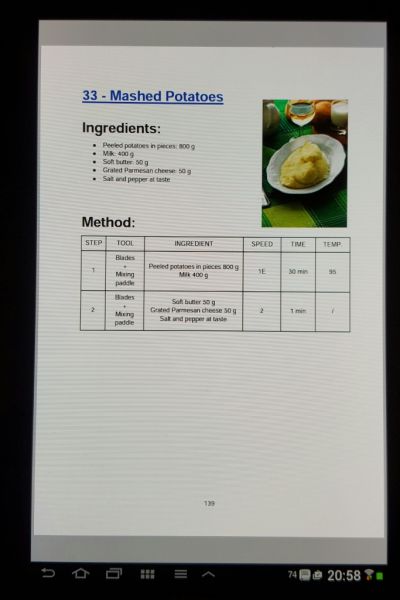 The first thing I did was to see how quickly the heating would work. It is great that the heating element is situated in the bottom of the bowl well, and as such is part of the machine rather than in the bowl itself. For instance, heating up the bowl filled with water up to the lower-level line (which allows you to set speeds up to 10) from 20° to 95° took about 15 minutes. The Hotmix PRO (or HTM) has a WAIT function so that you can cook to a temperature as well as to time.

It is easy to set the temperature with just one press of the temp button and holding the up or down button to quickly advance to the desired temperature.
Before I handed the Hotmix PRO over to a professional for some real cooking, I wanted to have a quick play with it myself just to see how user-friendly it really is. I’m a guy with two left hands in the kitchen so the appeal of having recipes stored on the machine should make life a lot easier, right?

Not so fast, these 250+ recipes cover a wide gamut of the entire repertoire a sous chef would be hired for but you won’t find any family meals pre-programmed in the HMP. The closest I came was a recipe for mashed potatoes. Not particularly hard to make without access to a thermo device but it showed me how to use the machine. Just a couple of observations: do read the instructions carefully! I didn’t peel the potatoes and didn’t chop them up in small enough pieces…

The other point is that the actual recipe might be a little bit hard to find because they are not indexed sequentially, but under certain headings. That means that my mashed potatoes were listed in the Sauces category. That’s why you need to either print out these recipes or have them on a tablet.
Other than that, following the inbuilt recipe is a cinch. It automatically sets the time, the temperature and the speed and stops when the recipe calls for more ingredients. 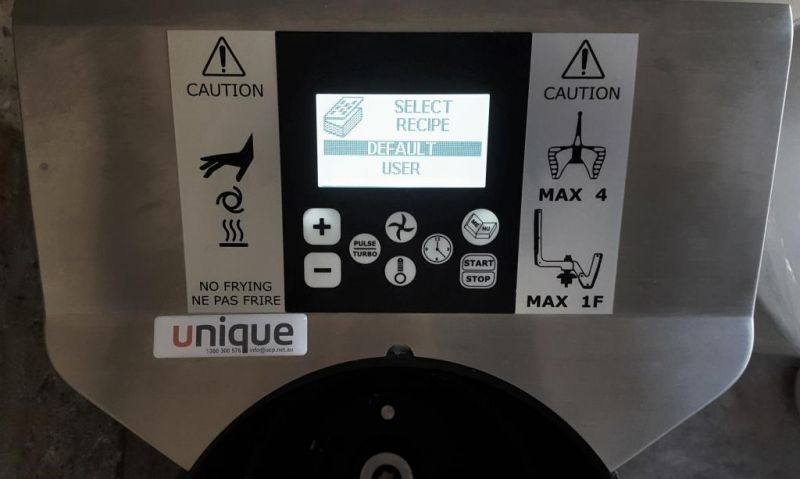 Over the last few weeks Amanda, our resident chef, has been testing the Hotmix PRO in a number of scenarios. Primarily with an eye to commercial operations because it would be unfair to test it extensively in family meal making exercises for which it was not designed.
Rather than going through the whole testing procedures “bit by bite” so to speak, we’ll put up some end result photos and collect some of her overall impressions on working with the HMP. 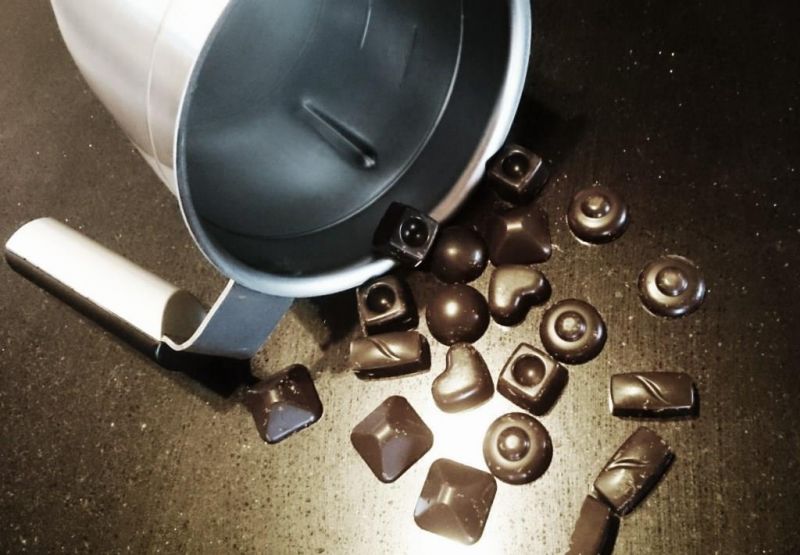 Having had previous experience with both the Thermomix and the ThermoChef she praises the build quality of the Hotmix PRO. The machine is easy to use, easy to clean (particularly after spillages) and very precise in temperature settings. The HMP is also very quiet on the lower speed settings. 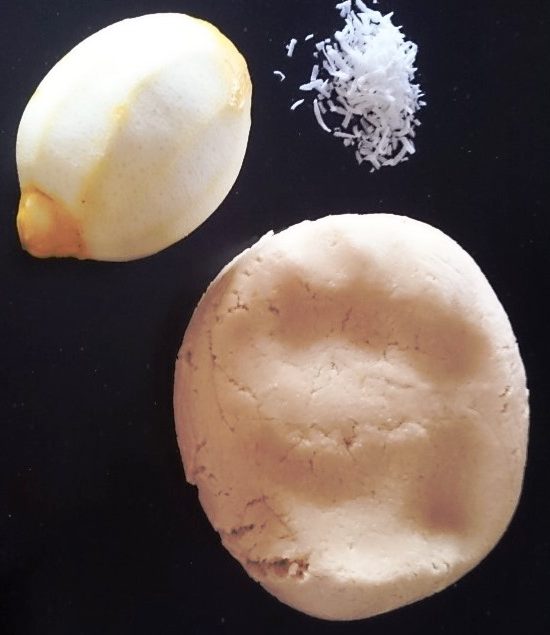 One of the best features in her opinion is that you can open up the lid to check the process or scrape down the bowl without having to restart the whole program. The fact that you can walk away from the whole operation and let the thermal cooker run the whole program without further intervention, is a godsend in a busy kitchen. You don’t have to worry about the machine not letting you know that it has finished as the beeps are annoyingly loud and do not stop until you switch it off. Again, not necessarily a bad thing in a noisy kitchen environment but it would be preferable to be able to program it so that it will remind you in one minute intervals or so. 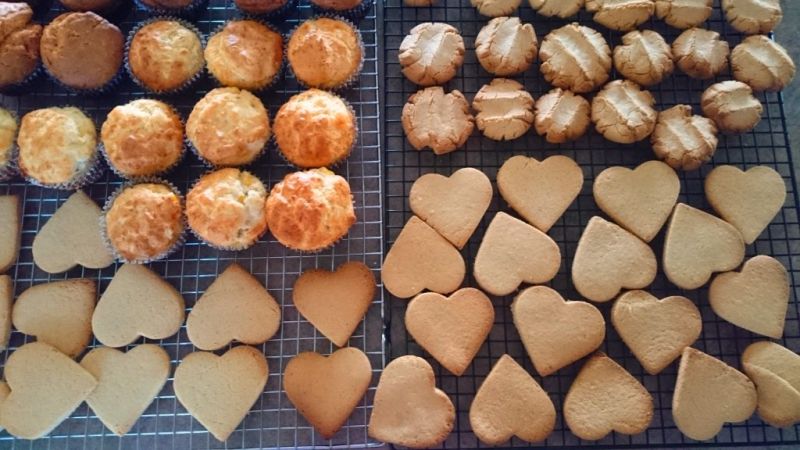 Another plus point Amanda mentioned is that when you set a high-speed it doesn’t just speed instantly up but gradually so that the ingredients don’t fly up through the hole in the lid if you happen to have it open! 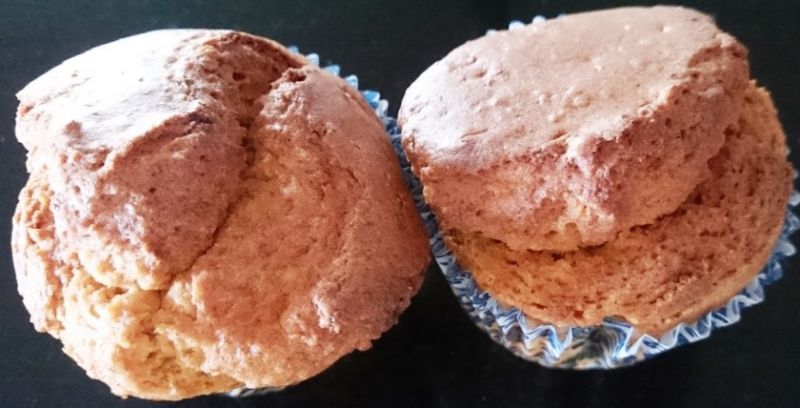 The main plus point of the Hotmix PRO compared to the other appliances that fall in the same category is the extreme temperature range which allows for fancy things like caramelisation which not only requires a high temperature but precise control.

Whilst we had only one bowl Amanda can see great advantages in having a couple if you’re very busy in the kitchen. That allows you to do back-to-back processes and the bowls are relatively inexpensive because there is no heating element in them. And not having any contact pins for the heating element in the bowl makes it easier to clean and dry, ready for the next batch… 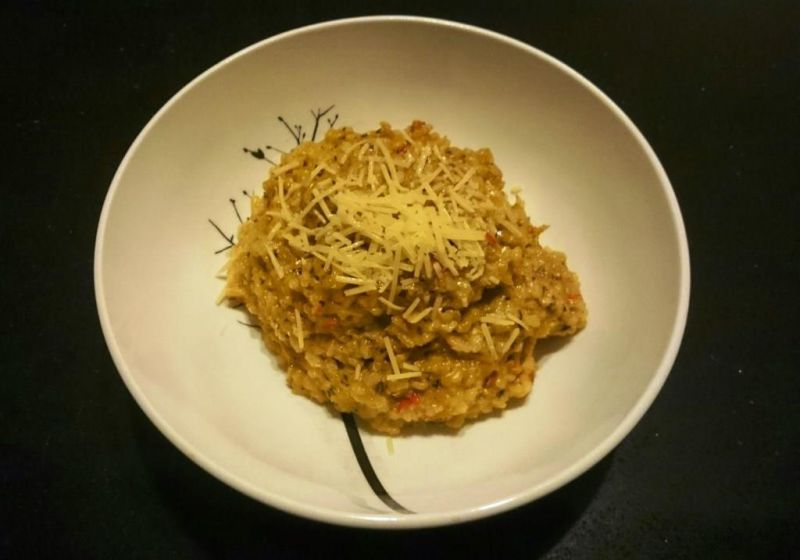 The Hotmix PRO is a brilliant machine in a commercial kitchen. That’s its target market but it could also be a serious consideration for anyone willing to spend upwards of $2000 for a thermal mixer.

The model we reviewed here was the Gastro, priced at 2695 but the Easy model is AUD2195 and more in the Thermomix territory, pricewise. There are some feature differences of course, both within the Hotmix PRO range and compared to other thermo cookers but functionally they are essentially very similar in what they produce: consistent results and considerable time savings. When you’re under pressure in the kitchen this is what you will be looking for.

Will it replace a sous chef in your restaurant? Maybe not but it certainly will make his life (and yours!) a lot easier…

Check out the Aussie distributor Unique Catering Products  or www.hotmixpro.com.au

We will continue to work with the Hotmix PRO over the next few months, trying out new recipes and gaining more experience. And we may update this article from time to time as we do with other products that we have reviewed.