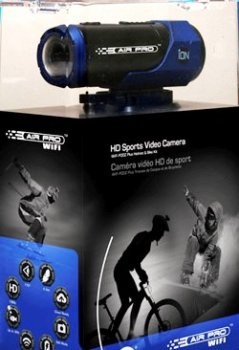 It’s an ever widening field populated by the likes of GoPro, Contour, Sony and Ion Air.
Most of these action cameras sport the same type of basic features: tough build, wide angle view, Full HD video and stills. Where they differ is image quality, controls, waterproofing built-in, shape, and, increasingly, WiFi capability. Most of them also have associated apps for iPhone and Android platforms these days.
Let’s look at the top-of-the-line model from a relative newcomer, ION.

From the unpacking onwards the ION Air Pro impresses. The whole kit is superbly engineered and looks built for speed in a long slender body, rather than a square boxy affair.  No need to encase it in a waterproof enclosure for a boxier look. This one can go down to 10 meters in its own skin. A unique feature is the “podz”. At the back of the unit you’ll find a cap that can be twisted off and which hides the HDMI connection and the micro SD card among others. The idea of podz is that they are interchangeable. This one carries the WiFi module, another one has a longer battery life. It’s a clever concept but ultimately a bit unnecessary as all these features will become fairly standard one day and just built-in.

What is a great feature is the simplicity of switching the unit on: move the slider forward to REC and you’ll feel a short vibration. Very positive if you have it mounted on the side of your helmet where you can’t see it. With the power button you can take 5MP stills. These days you’d expect a bigger sensor for your money but it is still decent.
If you put a 32GB microSD card in the unit you should have about 4 hours of recording available.
To make full use of that in one go you’ll need the battery podz or just be happy with the 2.5 hrs of juice in the unit itself.

Testing
We’ve done extensive testing with the Pro Wifi: leaped over tall buildings, jumped from the edge of space – just kidding.  But we did go flying with it. After all, it’s called the AIR Pro for a reason, I guess…

This particular unit comes with the lot: all the mounting systems you’d possibly need, such as for your bike handle bars or helmet. We needed a way to attach it to our aircraft, a Cessna 172 and a Beechcraft Bonanza. We tried several positions to see which view would be the best. Ultimately we choose the tie down rings below the wings and tail. We were not sure how strong the clamping mechanism was with all the airframe vibrations and going over 200 km/hr so we secured the unit with cable ties as well. We need not have bothered: the mounts held very well.

Have a look at the videos.

Yes, there is the rolling shutter so prevalent with this technology. That means it looks like the propeller blades are flinging away… Also the frame speed could have been higher for a smoother video. Generally, from a performance perspective, the quality is good but not outstanding.

We also went mountain bike riding with the Air Pro but probably should have mounted it on our helmet rather than the fork! But you get the idea.

What We Like
The Ion Air Pro WiFi is an extremely attractively designed action camera, lightweight (123g) and very tough. The simplicity of operation is brilliant. Connectivity like HDMI and WiFi is tops. Resolution is adequate for now but could be higher. The unit itself is waterproof rather than having to rely on an external waterproof case. Love that. Bonus: the Ion Air comes with 8 gig of cloud storage. Cool feature: the unit knows when it’s upside down and will record the right way up automatically.
And finally, let’s give some kudos to the truly excellent video tutorials on the Ion website. Well done.

Room for Improvement
This is a very competitive market, just like the competitive sports these action cameras feel at home in. So the specs have to be top of the ladder. We waited with writing our review till the promised Android app was released but in the few months since the Ion Air Pro WiFi came out, the action camera field came alive with more models, higher specs. We are not comparing models here but are judging this unit on its own merits.  For Ion Air to be really competitive in the long run, specs must be continually improving. Higher resolution and smoother video are two key elements.
We look forward to the Mark II model that is bound to come out. Maybe they’ll call it MACH 2 which might entice me to test it at that speed too! But I’ll probably have it mounted INSIDE the cockpit then…

There are several alternatives if you’re on a budget and want to buy the Ion Air.
Pricing start at AUD 319 for just the basic Pro model, followed by the Pro Plus with the WiFi model topping out the range at a hundred bucks extra. Not cheap and these prices will be under severe pressure given the competition. 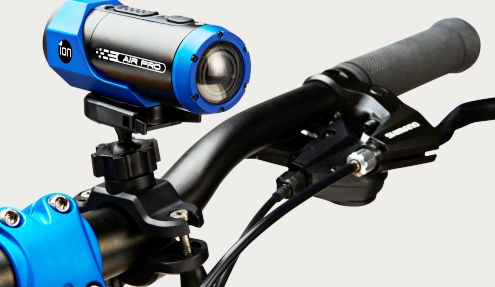 Conclusion
Lots of features to like, high build quality, smart looks and reasonable image quality.
This is tempered by the somewhat high price.