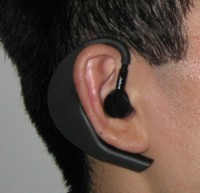 The “multiuse” Jabra BT5020 headset and A7010 hub bundle are Bluetooth devices which can be used with multiple communication devices, allowing office professionals and "road warriors" to use a single headset with their mobile, desk phone and PC.  Thanks to Jabra, DigitalReviews got their hands on the BT5020 and A7010 bundle for evaluation.

As a regular road-warrior with stints in the office, I was keen to test out the Jabra bundle.

The BT5020 headset is a work of art with its minimalistic approach, ultra slim profile and matt black finish on the broad side.  Only 9 mm thick, the headset has polished black finished edge, and buttons for volume control, power and call response.  The latter two buttons are separated by a micro USB charge port.

The A7010 hub is smallish complete with a corporate matt black finish and looked great next to my Linksys desk phone.  The top surface of the A7010 is interrupted only by a single raised button used for pairing devices.  The main controls are hidden underneath a removable cover as they are generally not required once the initial set up is completed.

Initial Configuration
As you would expect with any Bluetooth headset, the pairing with the mobile phone was simple and straightforward.  At the mature end of this particular technology I expected no less.

My desk phone has a standard 3.5 mm jack for headsets and there was no phone lifter.  This necessitated the standard earpiece from the phone to be connected to the A7010, and a (supplied) cable from the A7010 to be connected to the desk phone.  The exercise was simple and straightforward.  The A7010 has a dedicated power supply which is small enough to not encroach over a single power socket space.

The pairing of the A7010 and BT5020 was again straightforward.  The A7010 can be put into pairing mode by holding down the single button on top of the unit until the LED glows blue.  This indicates that the A7010 is in search mode and will remain in that state for five minutes.  The BT5020 needs to be put into pairing mode as well.  I managed to get everything connected and paired on the first go without any issues.

As earpieces go, the BT5020 is small and lightweight, comfortable enough to wear for an extended period.  The controls takes a little getting used to as the device is so light.  Initially I found that when I pushed the volume buttons I would also hit the power button or hang up button by accident.  After a few days of irregular usage, I found that I was better able to control my thumb position so that for the most part I would not inadvertently hang up my phone calls.

User Experience
The sound quality of the BT5020 headset was excellent, with clear crisp inbound and outbound sounds.  The outbound quality was such that in most cases the receiver was oblivious to the fact that I was using a Bluetooth headset.  The noise cancelling algorithm worked a treat.  Even when driving at speed with the windows down, I found my listeners were aware of a noticeable change in the sound but unable to definitively identify the change.

I have two little gripes to note.  The earpiece which is on a rotating stalk to make the BT5020 interchangeable for both left and right ear use is a little too easily rotated. I found that sometimes I would rotate the earpiece without meaning to.  I would prefer the resistance to rotating the earpiece to be higher to minimise the problem.

Secondly I would like an indicator on the A7010 hub to indicate that it is connected to my headset so that I can tell when it is back within range.

The charger for the BT5020 headset is an AC adapter – I would much rather an USB option similar to an iPod charger for flexibility.  Conversely a charging dock on the A7010 would be nice. However the BT5020 has an excellent battery life of 10 hours of talk time and 300 hours standby which means I really do not need to charge it that often.

The Jabra A7010 and BT5020 "Multiuse" bundle performs exactly as it is designed to.  The technology is integrated nicely and most importantly very straightforward to configure and deploy.  The Jabra bundle enables me to walk from the car to my office desk and be connected to my desk phone automatically.  I do have the additional step of lifting my handset before I could answer a call, but that is a limitation of my desk phone. 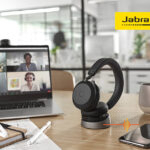 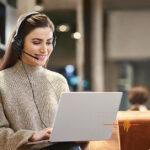 JABRA Evolve2 30 ~ On the Origin of Headsets