Muvee Reveal is a software program designed and developed by muvee to quickly and easily turn your pictures and video footage into professional-looking montages. Does it actually live up to its purpose?

I’ve been testing it to find out for sure.

Straight out of the box, or download, muvee Reveal, with its conspicuously lowercase title, was a breeze to download and install. The free trial is available from their website, www.muvee.com, and if you decide to purchase it, you can do so online relatively painlessly. All it takes to activate muvee Reveal is entering the key code that you receive from an online purchase. Installation itself took quite a while, necessitating an intermittent food break while waiting for the process, but besides the slowness there isn’t anything unusual about muvee Reveal’s startup process.

The first time that I attempted to run muvee Reveal, I did notice that the same slowness was present during active runtime as well. The program took so long to open that I actually opened it a second time before any sort of window popped up. Over time, I’ve also noticed that running any other programs simultaneously is quite a drag with muvee Reveal open, as it seems like the program is fairly intensive with system resources. Those with lower amounts of RAM, beware. As a benchmark, muvee Reveal seems to be using 30-50% of my CPU, running a 3.06ghz processor and 3GB of DDR2 RAM. 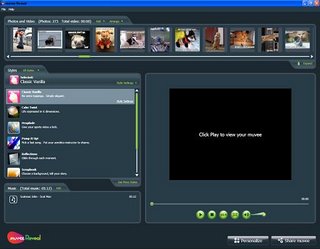 How Hard Can It Be?
When I actually got to using muvee Reveal, the interface proved to be amazingly simple. On the main (and only) screen, there are four frames: one to add movies and photos; one to select a presentation style; one to add music; and lastly a preview window to see what muvee Reveal has done with what you’ve fed it. I’ve got a rather large picture library, so I decided that my first experiment would be a montage of LOLcats set to “Scat Man.” I added a slew of photos, picked a style at random, added “Scat Man,” and pressed play. Within 30 seconds or so, muvee Reveal gave me a notice that I had too many pictures, suggesting that I remove X number of them in order to fit the length of my song, yet the movie (or “muvee”) started playing anyway. It seems that muvee Reveal will automatically trim the number of photos you’re using if you have too many and it will lengthen the amount of time that each is shown if you have too few, giving you a notice either way on how many photos it suggests adding or subtracting for the style and song that you’ve selected. With movies, if a movie is too long for the audio that you select, the program will attempt to find the best clips and then shorten the movie to the length of your audio. Too short and muvee Reveal will simply cut your audio.

Here is a first muvee I shot.

As far as the quality of my first project went, for less than five minutes of effort I was rewarded with a slightly above average presentation of LOLcats. Transitions were great, the pictures changed at varying paces depending on the beat of the music, and muvee Reveal automatically picked focus points for zoom-in and zoom-out (called “Magic Spots”), so it was an impressive show compared to the effort involved, but it wasn’t totally what I was expecting. The vast majority of pictures are automatically cut and cropped in various ways that correspond to the “Magic Spot” analysis, but these “Magic Spots” seemed to be completely arbitrary and almost always cut out critical parts of my pictures. Very often, I would find that the show was zooming in and out on completely irrelevant parts of the photo. I haven’t tested this with all kinds of pictures, however, so perhaps the technology is better suited to recognizing faces or landscapes instead of animals.

The overall product was, however, very passable for a last-minute show of some sort. Need to throw something together in an extremely limited time budget and still make it look pretty good? muvee Reveal will do that with the most bang for your money and time. If you do want to spend more time fine tuning something, muvee Reveal does have the tools to adjust and edit every single one of your “Magic Spots” and the range of all zooms. If you’ve got the time, the tools are all there to present your pictures just the way you want them presented and to clip your movies just right, but I will say that it’s a very time consuming process. Imagine, for a moment, fine tuning the focus points and zoom levels for 180 pictures, or the amount of shots that I was able to include in a single five minute show.

Beyond the first few minutes of use, all of the other features of muvee Reveal perform very well for what you’re getting. Importing media is easy, clipping movie footage is refreshingly simple, and the program is frighteningly good at picking out important parts of videos for use in a professional looking show. As a test, I turned a 20 minute TV show episode into a 4 minute montage and the result was that muvee Reveal did an excellent job of picking out just the right highlights for it to make something that did indeed look quite good. There are even options for adding captions and voice-overs to whatever production you end up with. My only disappointments in the editing department are that you can’t retain any audio from the original movie selections that you use unless you turn that movie into a sound file and that you can’t trim audio files within the program; trimming audio has to be done elsewhere. Beyond that, exporting your “muvees” into other formats is a breeze, allowing you to very quickly transform your work into something viewable in almost any form.

Conclusion
The bottom line is, “How does muvee Reveal compare to what else is available?” Are there tools and programs out there that could make better presentations? Absolutely. Slicker presentations could be made elsewhere, but you do get what you pay for; better presentations require more time and better software is definitely more expensive. Is there software that can do what muvee Reveal does just as quickly and for the same price or better? You’d be hard pressed to find it, if it exists. If you’re looking to casually turn your pictures and movies into montages and presentations and you don’t want to spend a whole lot of time doing it, muvee Reveal will do that for you and it will do it with a fair price tag. If you’re looking to make a masterpiece, look elsewhere but prepare to spend quite a bit more time and money doing it.

muvee Reveal and its counterparts are available for purchase at the website, with muvee Reveal selling for $99.95.