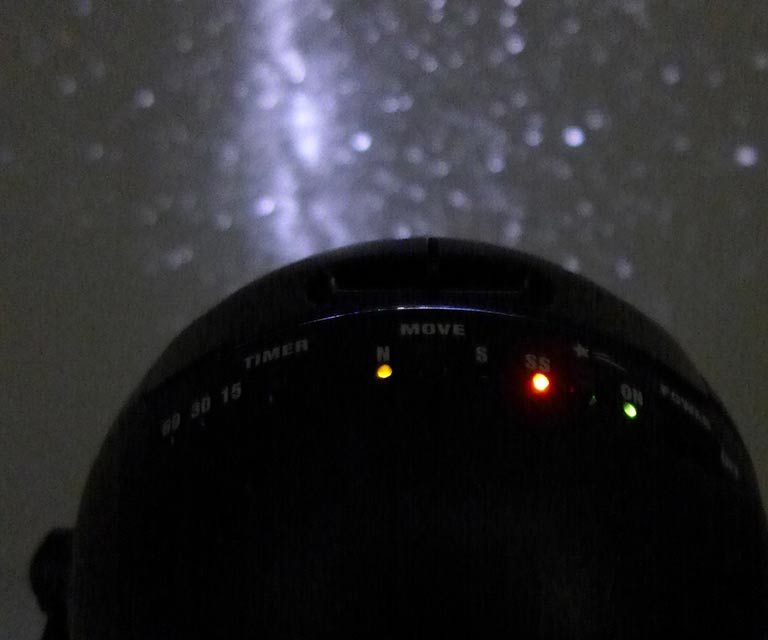 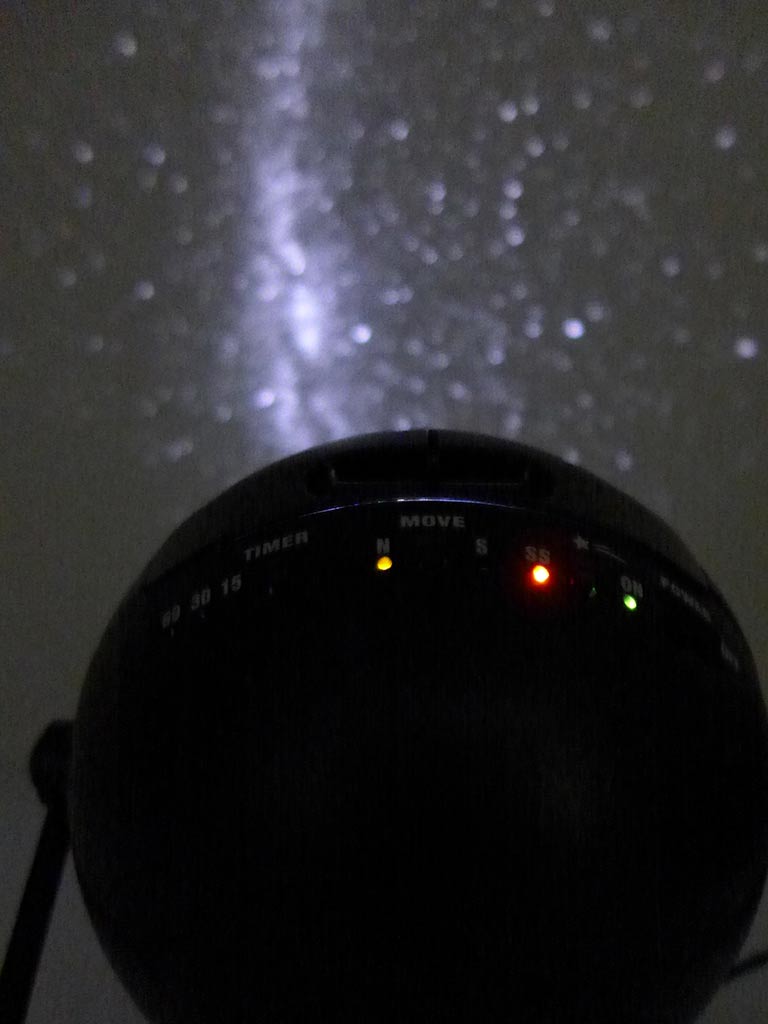 Back in 2008 we reviewed the Homestar PURE and found it to be a great little home planetarium.

This time, we look at its updated big brother, the bigger and brighter, Homestar Original.

The first Homestar home planetarium was released in 2006 and originally developed by the Japanese inventor and entrepreneur Takayuki Ohira. The development of the Homestar range was driven by Ohira’s expertise with large planetariums and his passion for bringing this technology into homes at a reasonable price. The Homestar Original is the latest incarnation of this vision. 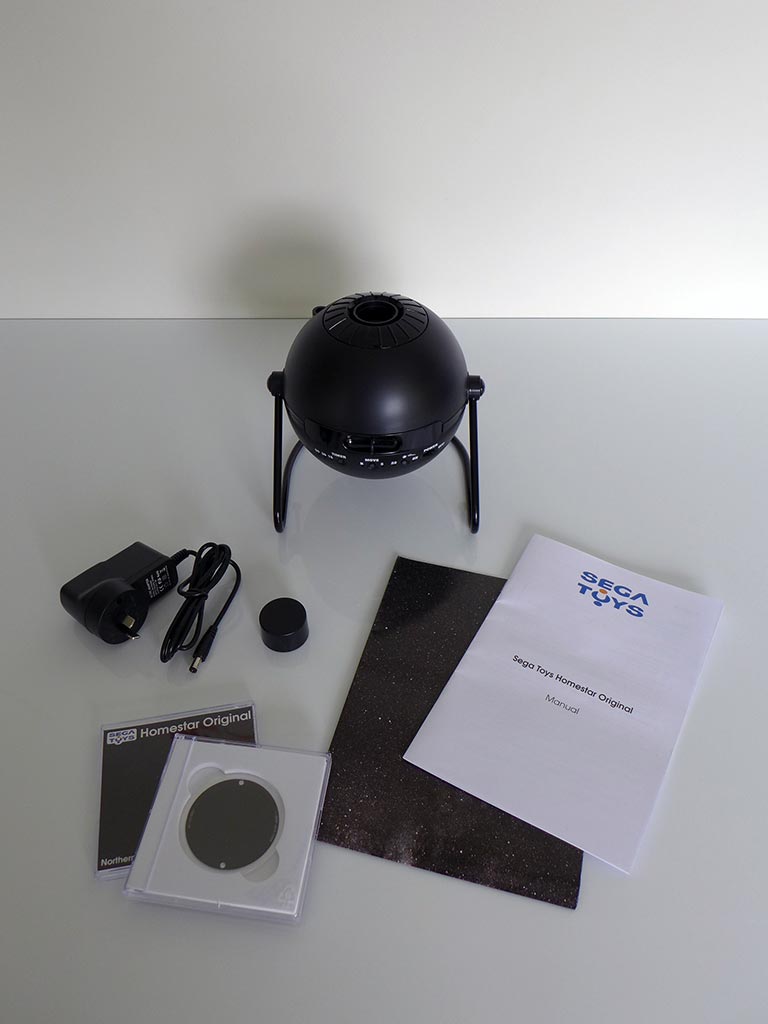 The Homestar Original package comes complete with everything needed to start projecting your very own planetarium. Along with the unit itself, our review sample came complete with an Australian power supply; two northern hemisphere projection discs; a short manual and a poster of both the southern and northern skies. Beyond this, a small protective cap for the projector lens is also included.

Unlike the egg shaped PURE, the Homestar Original is mains powered and has a spherical shape. Mounted on one wrap around leg, the Homestar Original’s sphere is able to tilt a full 360 degrees in one plane, making it easy to angle towards any ceiling or wall. The top of the sphere has a 4cm opening where the main projector lens emits light which is in turn surrounded by a circular focusing dial. Also on the top is a small secondary projection lens for the shooting star feature – more on this later.

The bottom of the sphere has some venting holes while the back (relative to the star disc tray) features a DC IN receptacle. Other than the disc tray and button array opposite, the Homestar Original’s black plastic sphere is otherwise unremarkable. The glossy star disc tray has a small handle and is manually removed with a firm pull, allowing for the quick interchange of /star discs/. Beneath the tray are three buttons along with corresponding LEDs. On the far right is an auto shut off timer which can be set to 60, 30 or 15 minutes. A movement button sits next to it, allowing the Homestar Original to be set to rotate towards the South or North (or off) along with the shooting star activation button. And to the far right is the unit’s power switch. 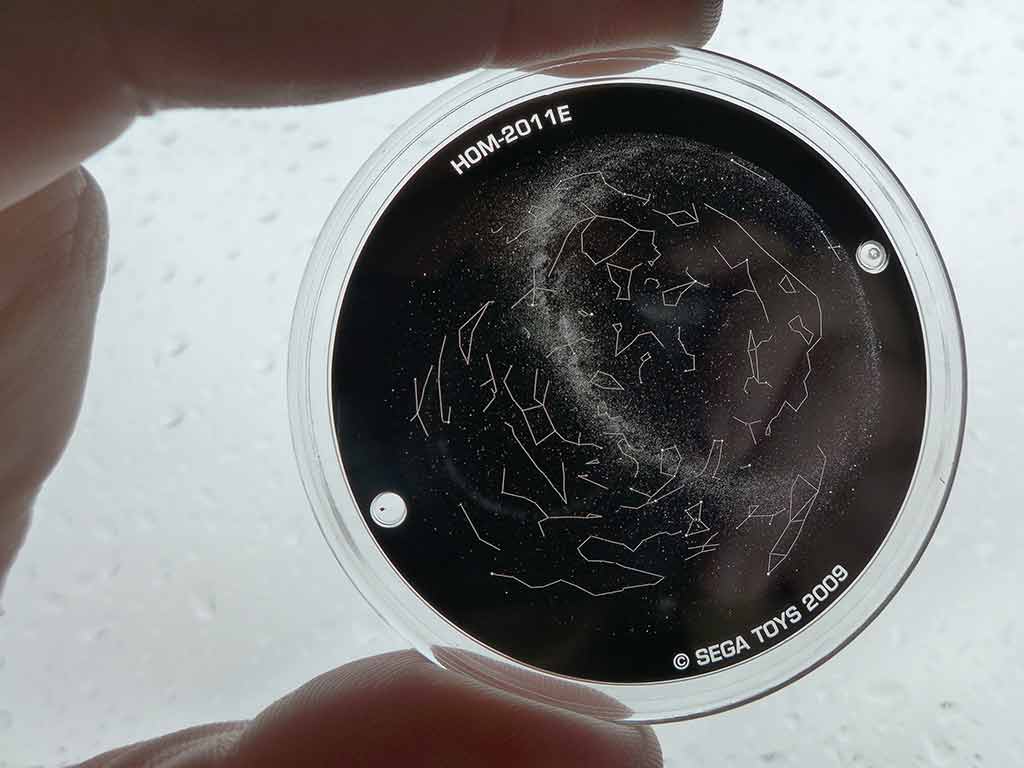 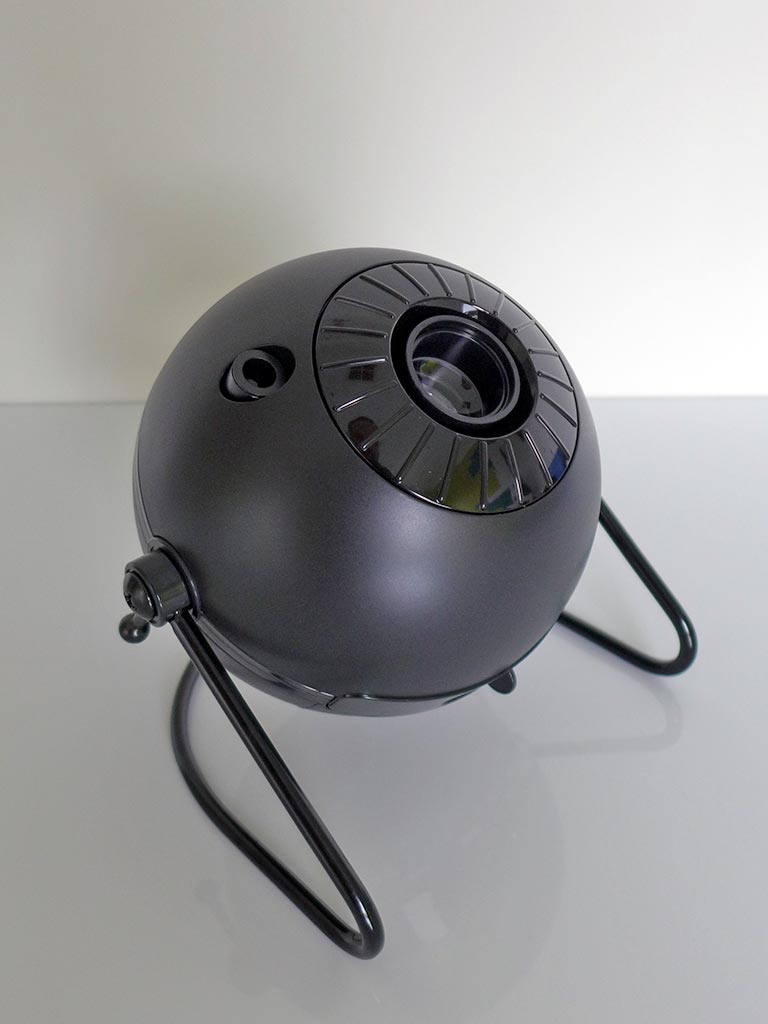 In completely darkened rooms, the Homestar Original’s 3W projector created a bright and lifelike image on our 2.6m high ceilings. When moved to a new room the Homestar Original needs to be refocused which is done by rotating the large dial surrounding the projection lens. The focusing ring was quite loose and easily rotated around, making focusing easy – It’s definitely a step up from the very loose focusing ring on the PURE but still feels a little on the cheap side.

While we predominantly tested the projection with the included Northern Hemisphere discs, we were happy to learn that the Homestar PURE discs were fully compatible, so we could on occasion, bask in the more familiar southern skies. Sega Toys claims that Homestar Original can display up to 60,000 independent stars and while we didn’t count them, when focused correctly, the projected image is pinpoint clear and really does make for a stunning visual representation of the night sky.

Despite this overall clarity, like the PURE, the outer edges of the Homestar Original’s projection are blurred and out of focus, irrespective of the positioning or projection surface. The majority of the image is excellent however and the aberration at the outer edge does little to detract from the feeling of lying or sitting beneath the stars on a cloudless night. Also worth mentioning for the astronomers out there is that as the images projected are disc based: higher magnitude stars are projected as small discs rather than actual points of light. I guess that’s the difference between a projector worth a few million dollars and one that costs under two hundred!

Also worth noting is that despite the increased brightness of the Homestar Original, the room still needs to be dark. Stars are visible in dimly lit rooms but to get the most out of the projection, a very dark room is still best.

Beyond projecting star discs, the Homestar Original also has a few additional features the PURE did not have. Other than mains power (which the PURE sorely missed), the Original can also rotate the stars at a leisurely pace above you. While this feature rotated the stars relatively smoothly, the motor used to undertake the rotation was unfortunately quite noisy relegating this feature to a bit of a party trick. While some may not be bothered by the noise, we found it a little too distracting and in light of the tranquility of the projection above and quite out of place. Thankfully, the Homestar Original is silent when projecting star discs statically. 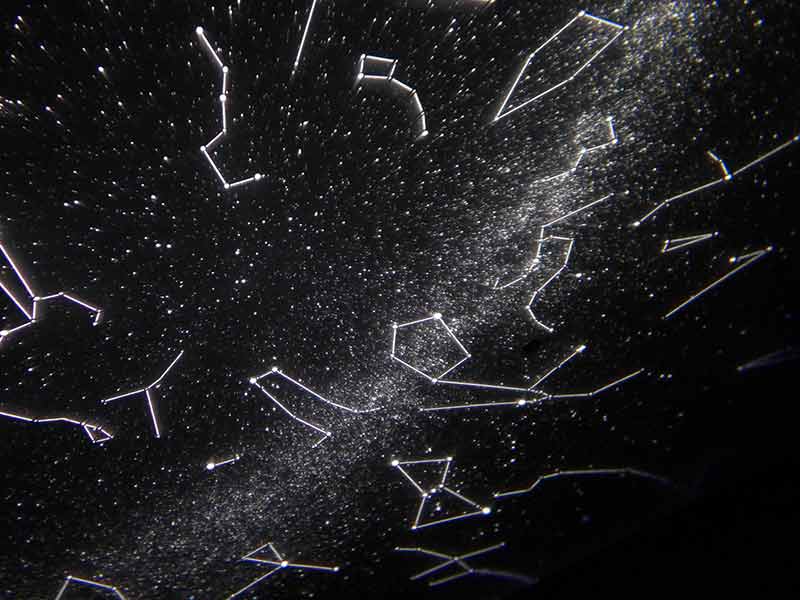 Another unique feature of the Homestar Original is the shooting star effect. When turned on, the projection fires a shooting star across the sky. While some may like the added atmosphere the feature brings, we found this feature gimmicky and ultimately turned it off after a few viewings as the effect appears in the same part of the projection each and every time. 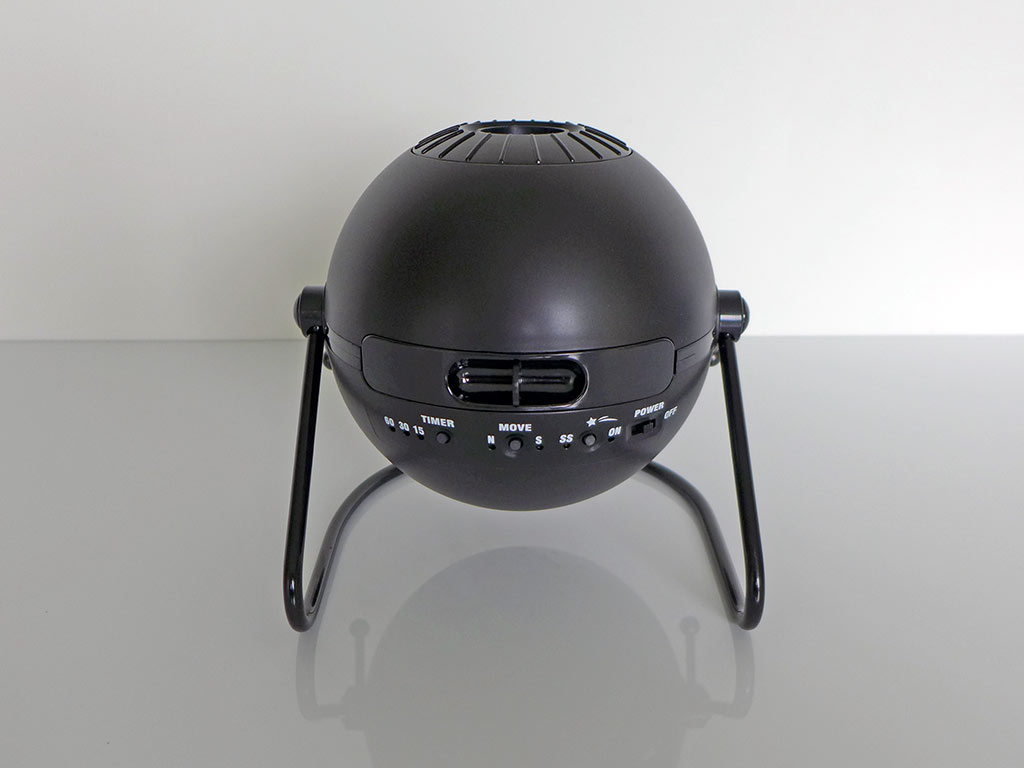 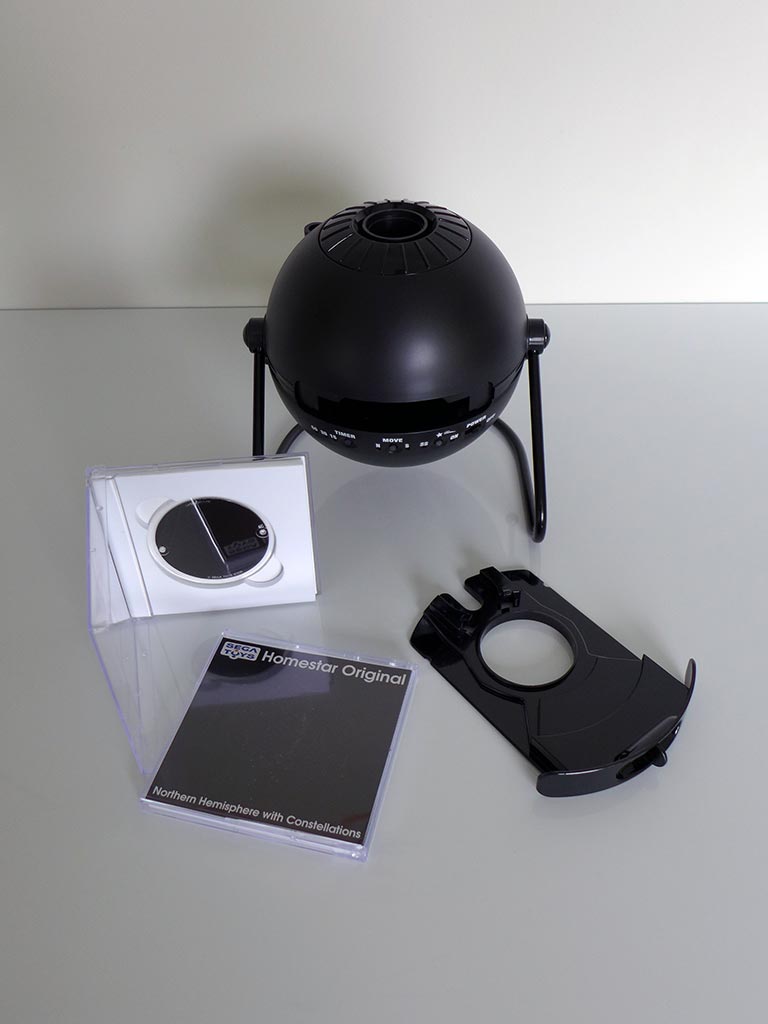 While the shooting star and rotation features weren’t our cup of tea, the Homestar Original’s core business of projecting the night sky was enough to impress us all over again.

In our opinion, the Homestar Original projects brightly and clearly, creating an atmosphere of peace and tranquility without any real need for the secondary features.

The Sega Toys Homestar Original is available now from Sega Toys direct for $185AUD with free shipping in Australia.