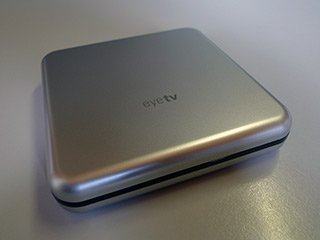 It’s been nearly two years since we reviewed Elgato’s EyeTV DTT Deluxe and as expected, Egato have not been napping.

Not only have Elgato added Windows functionality to their formerly Mac only offerings, but with the release of the Netstream DTT, Elgato have created a box which effectively shares HDTV across a local network.

Read on for our review of the EyeTV Netstream DTT

The EyeTV Netstream DTT is for all intents and purposes, a set top box, without the set top. Inside its tiny 12 x 12 x 2.5cm casing are two HTDV tuners and enough technological voodoo to push both signals out via a Mbit Ethernet port.

Coupled with the included EyeTV (Mac) and Terratec HomeCinema (Windows) software, the Netstream DTT allows two separate users the ability to watch (or record) up to two different HDTV broadcasts on any Windows or Mac computer connected to their local network.

First Impressions
If Elgato haven’t got the patent on neat, they should look at heading down to the local patent office ASAP. Like the DTT Deluxe we reviewed last year, the physical appearance of the Netstream is extremely neat. 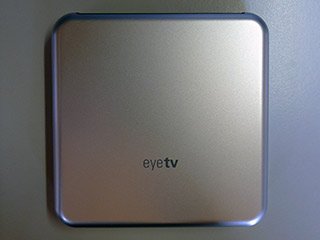 The unit is mostly silver in colour with both its top and bottom covered in an almost metallic, silver plastic finish. Wrapped around the Netstream’s flat edge is an elegant black stripe which opens up towards the rear of the unit to reveal the unit’s connection panel. Frok left to right, the rear panel features an Ethernet port, a standard antenna port, a small recessed reset button and a 5V DC in, power port. 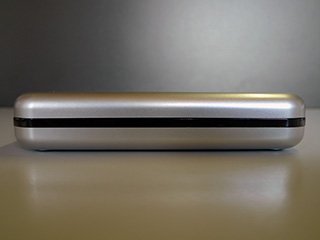 The whole unit is labelled with a single eyeTV logo on the top and a the Elgato branding on its bottom. The bottom also has four rubber stoppers to keep things steady and a small mounting hole for wall mounting the unit.

While there is no doubt about how good the Netstream looks from afar, the build quality can only be described as impeccable and even the eagle eyed observer would find it hard to pick a fault with the unit’s build at any distance.

In the Box
Like the DTT Deluxe reviewed previously, the Netstream comes with everything* you need in the box. Accompanying the Netstream hardware is a small tilt antenna (with a magnetic suction cup base), a 5V power adapter and a short length of CAT5. Also included is a short user guide, two EyeTV/Terratec activation key cards, a flyer for the new turbo.264 HD encoder and a CDROM containing the EyeTV and Terratec HomeCinema software. 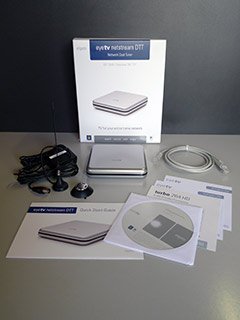 *While this kit certainly has everything you theoretically need to get up and running, we have always found the aerials Elgato includes to be generally lacking for use in our test area and we would strongly recommend considering the purchase of either rabbit ears or alternatively connecting the Netstream up to a proper external antenna.

Setup
For our initial setup, we decided to bypass the included antenna and connect our trusty rabbit ears. Once the Ethernet cable connected the Netstream to our router, we connected the power and let everything warm up. 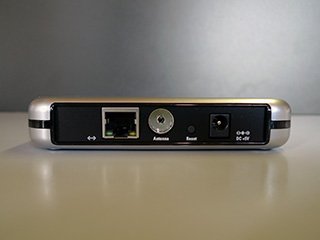 A minute or two later, we jumped onto our MacBook Pro and fired up the EyeTV software. After being prompted, we updated the EyeTV Software and automagically a small blue screen appeared with “No Channels – Please run the EyeTV Setup Assistant..” message. Okay.

We ran the Setup assistant as instructed and about twenty minutes later – we chose the exhaustive channel scan – our Netstream DTT had auto tuned all 19 local HDTV channels (including two radio stations). For a company that hasn’t really made its name in creating networked devices, setting up the Netstream was unbelievably easy. 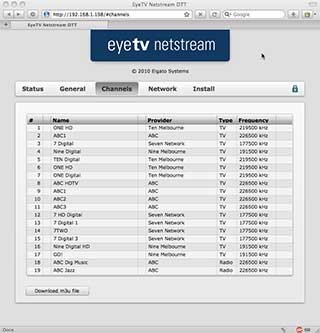 Setting up on a Windows 7 was almost as easy – The Netstream appeared in windows explorer and after a few clicks, we had sucessfully installed a small set of drivers from Elgato’s website. While we had to press “next” a whole lot more times in Windows, after about the same amount of time as it took on the Mac, we had a Windows 7 computer ready for HDTV viewing. 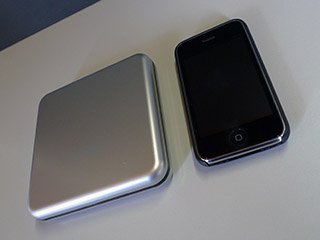 A word of warning: If you are installing a Nestream on Windows 7, don’t ignore the little message box that warns you not to update the software via Windows Media Centre (PlayReady). If you do, Media Centre won’t work properly – not that we ignored the message box or anything.

Throughout the setup process, the biggest issue we had (on either system) was that each new install required a new channel listing scan. Thats about 15-20 minutes per computer. Other than that, it was all good.

Usage
We covered the EyeTV software in our EyeTV DTT Deluxe review and general speaking, the experience is no different here. In fact, the only real change is that if more than two users are trying to access the two tuners, the Netsream lets you know you need to learn to count. Two tuners = two users. 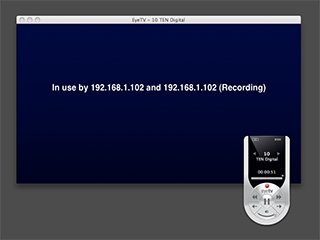 “The EyeTV software cleverly automatically records what you watch so you can go back and re-watch it. Once you are done reviewing this recorded content, you can fast forward right up to “live” television. Beyond this, you can record digital TV broadcasts permanently with one touch of the physical or software remote.

These recordings can be accessed via the iTunes like “EyeTV programs” software which allows you to organise, watch and export your recorded content. The software can be set to record content via programming guides (subscription required for most channels) and also by manually setting the recording start and stop times. Clicking on a program in the episode guide will allow you to add it to your recording schedule.

If this wasn’t easy enough, the EyeTV Programs software allows your recordings to be easily exported to iPod, AppleTV or to Toast with a simple right click.”

An EyeTV client is even available for iOS which when coupled with the Netstream and a Mac running the EyeTV software, allows HDTV streams to be re-encoded live for viewing on an iPhone or iPad.

While the included Terratec HomeCinema software for Windows does indeed do much of what the EyeTV software does on the Mac, it does so with little aplomb. 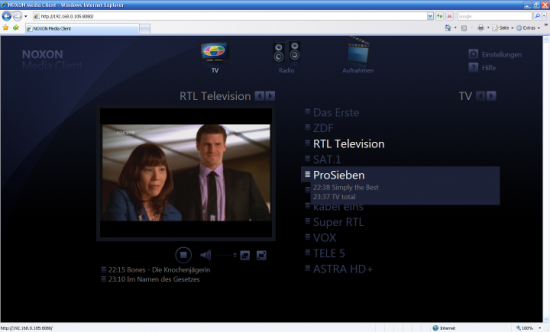 We only gave the Windows based software a brief test – Yes, the Mac EyeTV software is that much better – and once we convinced ourselves the Netstream worked on Windows, we moved on. The HomeCinema software was just too cluttered and unintuitive and just didn’t match the neat and minimalist and elegantly designed Netstream hardware.

In fact, after using the Terratec HomeCinema software, we started to understand what may have prompted Elgato to not release their products for use on Windows in the first place! 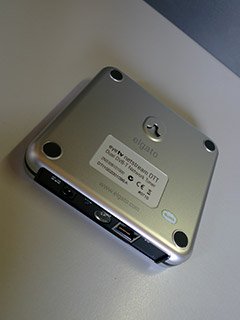 The EyeTV software continues to be the simplest TV software we have ever used and for those using Terratec/Media Centre on the PC we have some simple but likely unhelpful advice: Get a Mac.

Watching two simultaneous HDTV streams on an 802.11n network resulted in no real issues to speak of and both of our fairly recent MacBook Pro’s proved easily powerful enough to record and playback streams. We also gave the Netstream a quick run on an 802.11g network but even with only one tuner streaming, the picture stuttered and was generally unwatchable.

DVB-T reception can vary by location, and a rooftop aerial may be required in areas with a weak or obstructed DVB-T signal.

Conclusion
The EyeTV Netstream DTT is a fantastic piece of hardware. Not only does it look and work prefectly, but its dual tuners make it very useful for serving two computers simultaneously on a local network with HDTV streams.

In summarising the Netstream as a complete product however, we would do best to mention it’s full name: Elgato EyeTV Netstream DTT. The “EyeTV” part is the key here: Sure, you can use the Netstream to watch two streams of HDTV using Windows machines – and it works – but the whole experience just isn’t the same.

While we give the EyeTV Netstream DTT a solid 9/10, you might want to consider knocking off a few points if you are using this device on a computer that is not a Mac.

The EyeTV Netstream DTT is available now from Elgato’s website for 249.95 €.