The latest HDD Media Player to land on the DigitalReviews Network reviewer’s desk is the Noontec MovieHome V8.  Thanks to Achieva Technology Australia Pty Ltd, DigitalReviews have the opportunity to see just how a V8 performs.

First Impressions
The Noontec V8’s appearance immediately strikes me like a squat version of the mouse droid from Star Wars.  It is an all black affair with a metal cover, a perspex front and a thin silver trim across the middle of the fascia.  Rather than the industrial look of the Elektron EHP-606 or the stylish i-Box Z400W, the V8 is more utilitarian in finish.  Unlike the other two units the Noontec MovieHome V8 main unit itself has eight buttons plus the power button, allowing full operation of the unit even without the remote control.

The remote control is a detailed affair with a complete set of buttons including numeric keypad, video control as well as dedicated buttons for changing to Music, Photos or Movies menus.

Walkaround
As expected it takes no time to connect the Noontec V8 to the television and getting started.  Just pick the output from the back of the unit from a choice of CVBS, YPbPr or HDMI, hook it up to the appropriate input on the television side and the V8 automatically detects the resolution required.

The utilitarian theme continues when the Noontec V8 is fired up.  The Noontec logo is displayed during the start up process which takes under a minute.

It has a simple setup process, essentially nothing if your network is handing out IP addresses.  Under Setup, the system sub-menu allows for changes to the menu language, text encoding, screen saver, system update and ability to restore to factory defaults.  Still under the setup menu the network setup is as simple as it gets, automatic or manual IP.  Other options are available to customise the playing of movies, photos and music but they are optional as the unit will work immediately with an optional internal hard disk or USB drive plugging into one of the two USB ports.

Connecting to a network share is less than intuitive though, I actually had to resort to the old RTFM (read the manual) in order to connect to my network share.  However, the redeeming part is that you can customise the label for each network share, as well as support for an Active Directory domain logon.  There doesn’t seem to be a way to connect directly to a specified share, rather it connects to the top level and allows you to browse all shares that are present, subject to access control on the server side.

Keyboard input is a curious hybrid of onscreen "almost qwerty" keyboard and the numeric keypad on the remote.  Numerics are also available on screen if preferred but it was quicker via the keypad.  The "almost qwerty" keyboard is a reference to the layout where the middle of the keyboard is split by the OK, CAPS, left arrow, right arrow and Shift keys.  It is a different implementation and is reasonably easy to work with.

The main menu displays the options for Local HDD, USB Device and Network irrespective of whether any of these devices are actually present.  The point of differentiation with the V8 compared to the other aforementioned competitors is that it does not try to separate the types of media in the menus.  Instead it will happily display all files that are supported in the storage location of your choice.

The video and picture file displays is particularly nice as it checks the bandwidth first and displays a preview of the movie as you scroll through each file.  It is intelligent enough to wait for a pause in the scrolling before attempting to do any of these.  For both types of media there is a delay while the decoding kicks in before you could select the files to play.

There were no issues throwing common file formats at the Noontec MovieHome V8, it handled all the common file types without issues.  The V8 also supports RMVB files natively which is a definite bonus for those who have a collection of Real Media files, no more hoops to jump through such as a messy format conversion.

A few minor issues were encountered, none of them can be considered to be show stoppers.  Firstly the instruction manual does not talk about how to add a hard drive into the system.  For a technical person this is not much of a drama, three screws needs to be removed from the back plate and the entire assembly will slide out from the metal casing.  The hard drive cables are clearly visible and two screw holes on the underside will secure the drive firmly to the mount.

The support for AD authentication is great, but my personal perference is for the V8 to be able to map directly to the share path to make it simple for an end user.  It can be confusing for someone non-technical to browse through everything including hidden file shares which normally does not get displayed on a standard system.

The internal fan makes a noticable noise which I suppose on the bright side indicates it is working fine.

No separation of different media types which is not so much a gripe but a design feature.  I do kind of like the idea but also not, it has merits in that if you want to do a presentation that involves photos and movie files such as holiday memories, then there is no need to swap between menus.  On the other hand if you are not one to keep your network share tidy, then it can be a nightmare browsing through a long list of every support media type to find what you want.

On the networking side there is no NFS or uPNP support. 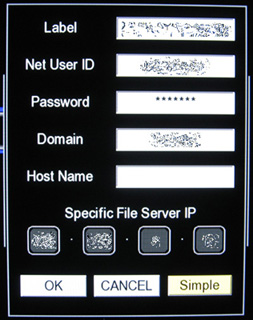 To be honest, my initial impression of the Noontec V8 was actually disappointing.  I thought that making things simple should not mean removing features.  However when I started to explore the device a bit more and consult the manual, it turns out to be quite a decent little unit.  Whilst I initially thought that it does not even have proper network support it turns out to be there, just buried in an extra layer on the remote (or front panel).

All in all, the Noontec V8 is mostly simple and clean.  If you are using the local HDD or USB device option then things can not be any simpler.  The networking side could do with a bit of finetuning to make it more user friendly.  There are definitely some deficiencies on the networking side that could be improved in a updated firmware release.

The codec support does not appear to be as extensive as some other units, but the native Real Media support is a definite plus for those who have a need for it.  Besides, who really needs to have the umpteen billion different codecs beyond the standard handful?  They are nice to have but certainly in no way cripple the Noontec V8.

The final impression of the Noontec MovieHome V8 is no showpony but a sturdy workhorse that gets the job done.  The Noontec V8 is available now for AUD$229 from here amongst other retailers in Australia.