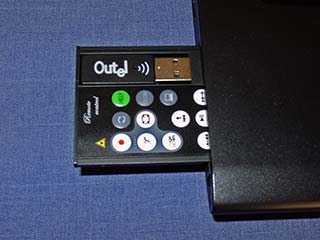 Read on for more..

The Intelligent Remote came packaged with a USB dongle (fitted within the remote), a CDROM and two CR2025 batteries (only one is required to operate the remote).

I can’t go on without mentioning the Intel parody “Outel” logo which brands both the remote control and the USB dongle.  While some may see the logo as giving the whole package a cheap feel to it, this is quite unwarranted. The Intelligent Remote is better than that.

The Intelligent Remote has regular PCMCIA card dimensions of 85.8 x 54.2 x 5.0mm and is fairly well made with neat cuts and tight seams. At 45mm in length, the USB Dongle is smaller than most USB flash drives and is marginally wider than a standard full size USB port. Of course, since it fits snugly onto the remote  – which in turn hides away in your PCMCIA slot – the dongle’s size isn’t really an issue. 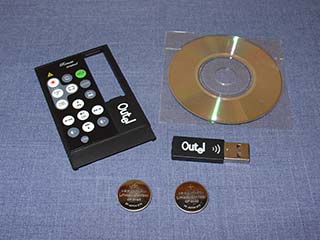 The remote itself has sixteen bubble buttons, most of which can be customised with the ShowJet software included on the CDROM. The buttons respond well to key-presses and feels a lot like any other credit card style remote – albeit with a hole in it where the USB dongle fits when not in use.

Beyond the customisable buttons, the Intelligent Remote has a handy laser pointer which is activated by pressing the top left most button.

Expert mode, however is a different story. To enter Expert mode, simply insert the CDROM and install the ShowJet software. Once installed the remote becomes active in the following applications, by default. 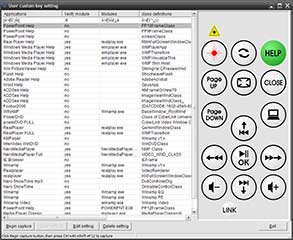 While it’s true that this is not an exhaustive list, this is of no import: The ShowJet software allows you to create custom button settings for any Windows XP and Vista (not tested in this review) application.

To give an example of its customisability, I managed to set the remote to skip forward/backward, turn the volume up/down and switch to full-screen in Media Player Classic in a matter of minutes.

If ShowJet is installed, the software loads up automatically upon insertion of the USB dongle. The software also unloads itself from memory when you remove the dongle so as to save system resources when the remote is not in use.

While the ShowJet software is a little rough around the edges, it is quite satisfactory. Granted, setting up custom commands in applications for the first time isn’t as simple as it could be, but once you get your head around the wording and layout of the software, it does the job.

When connected to a computer for the first time the dongle and remote may need to be linked. This is achieved by simply pressing the “link” button on the Remote and while gently prodding a small hole on the USB dongle with a pin or straightened paper-clip. 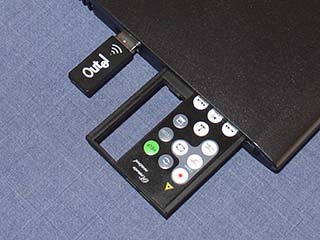 The remote worked well in all applications tested, including limited control of the operating system (Windows XP tested) – Mainly switching between applications, opening and closing windows and opening “My Computer.”

The remote’s layout is fairly well thought out and when held as a remote, found all buttons to be naturally accessible with my thumb. Each time you press the button, the USB dongle flashes a green LED to signify a successful transmission.

My custom button settings for Media Player Classic and Mozilla Firefox worked flawlessly and I found the remote to be especially useful in video playback allowing me to control the volume for example, without having to be near my notebook. The Intelligent Remote is an ideal PowerPoint /clicker/, easily allowing you to move forward or backward through slides. During such use, the inclusion of the Laser pointer borders genius.

One area where the Intelligent Remote was a little flaky was its communication with the USB dongle. While the remote generally worked well at distances of up to six metres, it occasionally would miss key-presses, which testing revealed to be due to interference from other wireless devices. Once I turned off my RF keyboard the Intelligent Remote became a lot more reliable and performed well. I found that not all RF peripherals interfered with the remote and cryptically, the reliability often improved after power cycling the notebook.
The remote seemed unaffected by my 802.11G network. 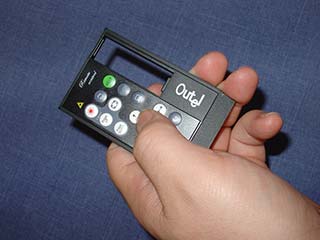 Overall, the Outel Intelligent Remote is an excellent concept and that is fairly well implemented. The ShowJet software, while functional, could really do with some user interface design tweaks but considering the once-off nature of its use, is otherwise satisfactory.

Due to its PCMCIA form factor, the remote does feel a little odd in your hand – the PCMCIA grooves and shape aren’t complemented by the gaping hole left for the dongle, for example. A possible cure for this would be to have the entire remote section click-out of the PCMCIA holder, much like the USB dongle, but this is a minor issue.

The Intelligent Remote’s resilience to RF interference might be an issue depending on your environment, but otherwise the remote’s communication is good.

Despite these gripes, the Intelligent Remote is an incredibly handy thing to have stored in your PCMCIA port. Instant remote control – No looking through your bag or forgetting it at home. Click the eject button, plug in the dongle and you’re there. Easy.

And at USB Geek’s $30US you really can’t go wrong.