Hands On with A.C. Ryan PlayOn!HD3 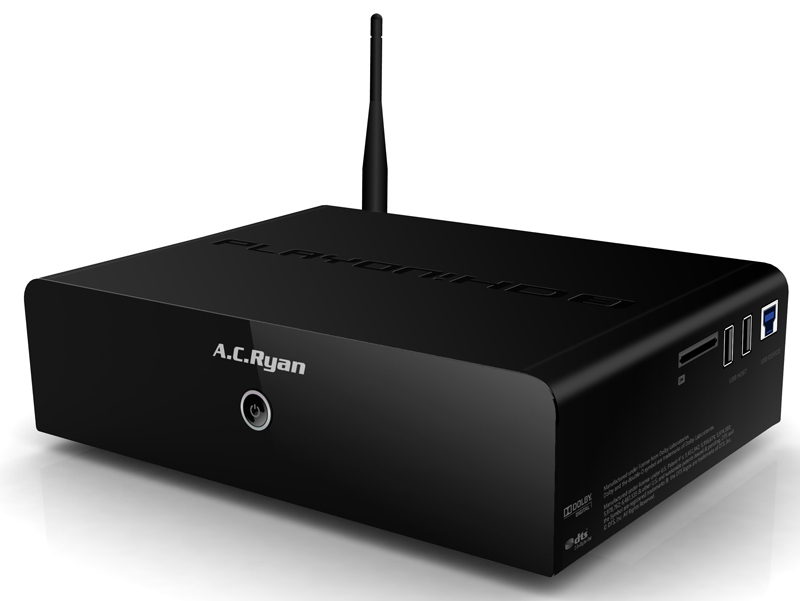 It has been a while since DigitalReviews visited the networked media player space.  To mark our return, we would like to welcome A.C. Ryan’s Playon!HD3 to the DigitalReviews test bench.

Despite the rise and rise of complete media center solutions such as XBMC and Plex, there seems to still be a market for an appliance based solution.  So let’s see how the Playon!HD3 performs.

First Impressions
The first impression I have was not of the Playon!HD3 media player but with the people working at A.C. Ryan.  It was refreshing to deal with a company that is enthusiastic, responsive and personable.  The review unit arrived in record time despite its overseas originating port.

As for the Playon!HD3 itself, it is a small-ish minimalist black appliance with a single power button in the center of the front fascia.  The A.C. Ryan name is boldly printed above the power button, but aside from that there is no other marking on the front of the unit.  By smallish though, the unit is about the right form factor to house a full size hard disk drive without excessive bulk.

In Action
Mounting the internal hardware was painless with the internal hard disk tray sliding out the side of the unit.  A few screws into the tray and the disk is securely mounted and slotted back into the player.  With my HDMI cable already in place, it took no time to get the unit powered up and running.  It is good to note though, that A.C. Ryan bundles an HDMI cable with the player so that everything you need to get going is in one spot.

For the record, the Playon!HD3 has one of the more coherent software I have had the pleasure to review to date.  You can just tell that A.C. Ryan put a lot of care into the product right down to the boot screen that matches the colour scheme and company name.  Yes, I have reviewed products where the boot screen does not match the product brand.

Depending on your level of requirements, the setup can be nothing (instant on), or something more than nothing but generally pain free.  System language defaults to English on first start.  There is an option to change the system font, desktop and screensaver if so desired.  My view on that is the same as hotel rooms on a holiday – if you see so much of it that you are bored then you are doing it wrong.  On the other hand, it is nice to have the option for those who must absolutely colour match their home screen with their decor.  Horses for courses I say. 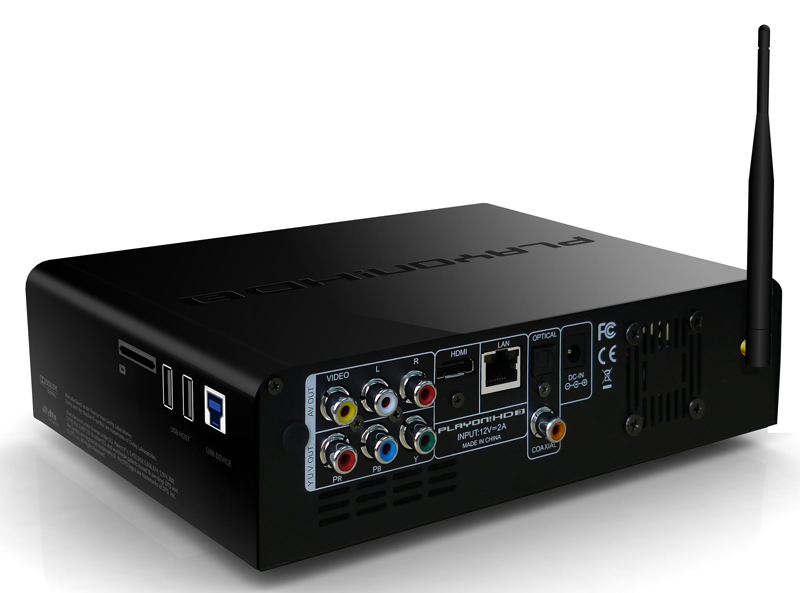 Browsing through the setup menus, the audio section offers a night mode option which if turned on will decrease the audio output volume.  There is also an auto option to auto-adjust dialogues and background audio at a “normalised” level.

The video section offers ability to change the aspect ratio (Pan Scan 4:3, Letter Box 4:3, 16:9 and 16:10), the resolution of the TV system it is connected to, and a Plasma Mode to protect a plasma TV by reducing the level of brightness.  The Playon!HD3 also tries to provide a more detailed level of colour depth although the results may vary depending on your TV.

The Playon!HD3 is rated for 3D, including ability to simulate 3D by converting 2D video into 3D.  Unfortunately I was unable to test how well this function works without a 3D television handily available.

The Value Add
I am not going to bore everyone with the stock standard features that one would expect from even the most basic media player.  The value add of the Playon!HD3 is the software they slap on top of the hardware chip.

Previous media players I reviewed tend to be rather generic, some interface looked barely finished and others at least made an effort to slab on a pretty face.  Beauty is more than skin deep for the Playon!HD3.  Rather than just providing a bare bones file manager with file extension filter on, the Play!On3 provides features that are logical and useful.

One particularly sweet feature that is included is the Jukebox mode.  Media is displayed with cover art and the ability to sort by Genres, Title, Rating, Year, etc.  Whilst this feature has been available on XBMC and Plex solutions for a while, this is the first time I have come across it in a media player standalone unit.  There is a catch to it though … it requires the use of a separate open source tool by the name of YAMJ (Yet Another Movie Jukebox) which is available from the A.C. Ryan website.  YAMJ recursively scans a library for video files and builds an index that contains information such as year, language, subtitles and container.  The tool comes with a GUI front end whilst all the heavy lifting is done by a command line tool written in Java.  The first pass using the tool can take a long time particularly if it is ingesting a large existing media library although subsequent updates are quite a bit better.  YAMJ generates an index file which is parsed by the Play!On3 when you access it via the Jukebox mode.  It is a nice feature to have, though just how many people would bother to download, install and routinely run the tool is a debatable point.

Another godsend function is Edit Protection and Folder Access Protection.  You can set a PIN to prevent deleting of files or formatting of the HDD, something that is totally critical when you have a two year old master remote control driver running around the house.

The Playon!HD3 also supports SHOUTcast internet radio, a bittorrent client and YouTube XL right out of the box.  And for the Asian communities there is also streaming apps like PPTV, Funshion and LeTV.

Another handy feature is the ability to create shortcuts to favourite folders.  This certainly helps when an impatient 2 year old is demanding his favourite show when I don’t have to navigate through the File Manager.

The Nitty Gritty
The heart of the Playon!HD3 is the Realtek RTD1186 chipset.  On paper, this latest iteration of the high definition media playback System-on-Chip (SoC) looks decent.  There is standard expected codec and USB supports (see Specifications section later in the review).  Additionally there is Gigabit Ethernet and Wireless-N support as part of the SoC.

Now here is where an issue lies, the processor on the RTD1186 chipset is only a 750 MHz.  While there is no direct correlation between CPU speed and NIC performance, the overall system performance on the SoC is most definitely constrained by the meager amount of CPU power available to drive everything.  It is important to note that in the A.C. Ryan documentation, they state “Gigabit LAN 10/100/1000Mbps for Full HD streaming, 10/100Mbps for network data transfer”.

Accordingly I have been able to stream high definition media from my NAS without stuttering, however, file transfer is somewhere between pretty slow and abysmal.  This is an important point and is unfortunately a known limitation of the Realtek media playback SoC.

Gripes
Not an A.C. Ryan issue per se, but transfer of large files is best done via USB.  Luckily there is an USB3 port onboard.

The Jukebox has a 999 movies limit per index.  You could however have multiple indexes as the indexing is directory based although that means your media collection will be split over the said multiple indexes when you search through the Jukebox.

In order for the recently added files feature to work, the scan for changes option needs to be enabled in the Setup menu.  The issue is that the scanning will only run on boot up, which slows down the unit pretty much when you want to use it.  That said though, the scanning generally took a few minutes on my nearly full 2TB drive.

On the topic of boot up, the internal HDD does not get recognised straight away.  It takes a few moments before it become visible to the system.  Early on in the test phase it caused me to think that I keep losing local HDD shortcuts.

Lastly, I had some random system crashes which happened after leaving the player on overnight but that went away on it’s own.  A.C. Ryan does recommend that the internal HDD to be formatted by the PlayOn!HD3 for best compatibility.

Wishlist
On the top of the list, a truly Gigabit Ethernet capable chipset.  I know, this isn’t just an A.C. Ryan issue.

Ability to schedule the scan HDD for changes task.  Better yet, if YAMJ is used then utilise the that index file rather than having it as two separate tasks.

Built in YAMJ capabilities.  Again I accept there are numerous technical challenges to it.

Conclusions
The Playon!HD3 by far is the most complete media player experience I have had the pleasure of reviewing.  All the useful features are there without trying to turn the unit into that “something more” which inevitably degrades the experience.  I have noted a few flaws in the gripes section and added my wishlist that I think will round out the unit’s functionality.

The minimalist look does not attract unwanted attention particularly when you are watching a video.  I thought initially that the white glow ring around the power button will be distracting but that fear never panned out.

If you are in the market for a media player and does not want to go down the route of a HTPC then the Playon!HD3 should certainly be on the list of candidates.  The basic functions does not require any technical knowledge, but to get YAMJ going will involve a miniscule amount of elbow grease.  For the record, the User Manual is extremely readable and without the usual spelling and grammatical errors so common in cheaper products.

DigitalReviews would like to thank A.C. Ryan for providing the review unit and the very prompt responses.  It has been a pleasure.