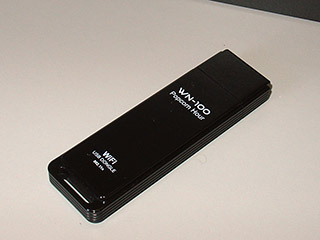 I was lucky enough to get my hands on one of these puppies and managed to gave it run on both the Popcorn Hour A-100 and A-110.

Read on to see how I got on.

The WN-100 is packaged with little fanfare and apart from the box it’s packaged in, comes complete with a USB extension cable. No manual or instructions are included.

The piano black dongle looks good in the hand and its top and bottom feels as smooth as it looks. The dongle comes with a form fitting cap which fits comfortably over the USB port fairly securely and has only a slight hint of play. At the other end is a small loop allowing the dongle to be attached to a set of keys or a lanyard, etc. In essence, the dongle looks much like a stylish, yet oversized USB flash drive.

With no instructions included in the package, I simply connected the WN-100 into one of the front ports of our A-100 which resulted in it lighting up a previously invisible green LED. When I entering the Popcorn Hour’s onscreen network setup, I instantly noticed that the previously /greyed out/ wireless setting entry had become available.

I quickly pumped in all my wireless details – WPA2 TKIP/AES on a hidden SSID – and waited.

Now, over the years I have found that many wireless gadgets – most that should know better, mind you – seem to require a network’s SSID to be publicly broadcast upon initial connection. knowing this, I quickly adjusted my router settings and tried again. 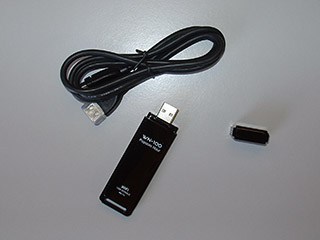 After a reboot of the A-100, the WN-100 dongle found my network and acquired a DHCP IP address. That’s better.

While I merely unhid my SSID to continue testing the WN-100, this is something that I hope will be addressed with an upcoming firmware update. After all, this is a Popcorn Hour and if our experience with the A-100/A-110, firmware updates are anything to go by, improvements and fixes are always in the pipeline.

In testing the WN-100, we placed the Popcorn Hour units – both A-100 and A-110 were tested – approximately five meters from our Wireless N router which was not within line of sight. All streaming was undertaken via SMB which as of an earlier firmware update, has proven flawless via our wired connection. 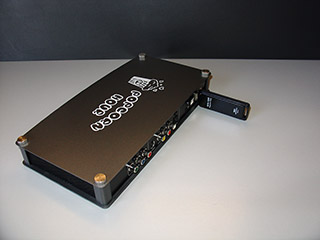 When connected to the front port of the A-100, the dongle size unfortunately hides the LED indicators and critically, can obscure the remote control IR receiver. In our setup, the viewer sits to the front left of the unit resulting in the remote/IR receiver not having line of sight, ie: rendering the remote unusable. With its rear USB port, the A-110 does not suffer this problem – unless you happen to use its front USB port, of course. The inclusion of the USB extension cable, however, does provide A-100 users a work around.

While the product page states the streaming of video over WiFi under best conditions is able to achieve a maximum of 10Mbps, i decided to use real world files as the best indicator or speed. After all, this dongle connects to a unit that prides itself on playing back a lot of files – not just &lt;10Mpbs encodes. 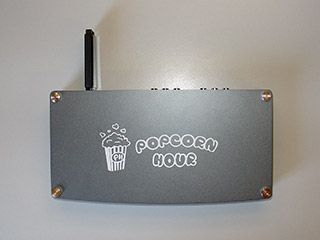 To start the playback tests, I fired up some standard definition AVI files which played back just as smoothly as they did via our wired connection. In fact, when playing back standard definition content, the unit performance appeared to be indistinguishable from its wired alternative.

720p and 1080p content, however, was not. While both 720p and 1080p files began playing, after a few seconds playback became stuttered with constant audio dropouts. I tried a variety of files and the results were always the same. SD played back as normal: 720p+ files, however, were a no go.

Unfortunately, DVD ISO files also proved problematic via the WiFi dongle: Playback was stuttered, with constant slow downs and audio dropouts rendering playback essentially unwatchable. It is probably worth mentioning that all files used in testing worked flawlessly via the wired connection making the dongle the only contributing factor. 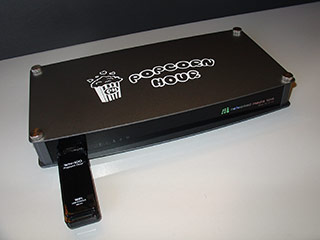 While playback of DVD ISOs and HD content was out, using the dongle for transferring files to our A-110’s internal HD worked well enough, with a 350Mb AVI file transferring in a little under six minutes. As a comparison, transferring the same file to the Popcorn via its wired connection took just over one and a half minutes. If we take into account that both tests involved a wireless hop from my MacBook Pro located about the same distance from the router as the Popcorn Hour, the WN-100 appears to be, for want of a better word, /slow/.

It is worth noting that the WN-100 may in fact play back some 720p files that have low throughput requirements, however, considering the spread of files I used for testing (and the fact that a total of zero played back correctly) I believe this dongle is not appropriate for the playback of 720p content, on the whole.

When I think about it, the WN-100 is a little out of place in the Popcorn Hour line up. Both the A-100 and A-110 are rough diamonds, proving incredibly functional but generally appear to lack that final coat of varnish. The WN-100 looks great and is simple to use, but it doesn’t deliver the breadth of functionality I’m accustomed to seeing from Popcorn Hour branded products.

Granted, 802.11n probably can’t handle streaming 1080p content – I couldn’t get my wireless network (sans WN-100) to do it – 720p definitely can. As a quick test, I played back some 720p content across my network (using a router/MacBook Pro for the Wireless hop) and found the same files that stalled via the WN-100, worked without issue on this alternate route.

While I really like the A-100 and think the A-110 is one of the best "gadgets" I have ever seen, the WN-100 just doesn’t live up to the performance the hardware it is designed to work with, represents.

Having said this, if you only need to playback SD content (or do irregular file transfers) on a visible network, the WN-100 works fine, but don’t expect your stunning 1080p or even 720p content to stream with any sort of watchable fluidity.

Throughout our tests, the WN-100 worked with both the A-100 and A-110 with no discernible differences. SD worked well. HD and ISOs did not.

At $37US the WN-100 is a fairly worthwhile expense as long as your requirements and expectations are in line with what it can offer, otherwise prepare to get dirty and run that Ethernet cable under the house.