Last week I got my hands on a copy of Prince of Persia: The Forgotten Sands for the PS3. This week I bring you a review of what it was like to visit a virtual palace and battle a legion of sand demons.

There are a slew of action/adventure games out there making waves in the gaming world today, such as the God of Warand Uncharted series, and Prince of Persia: The Forgotten Sands is not entirely dissimilar from them. There is both action and adventure to be had, though the game is weighted fairly heavily on the platforming and exploration end of the spectrum, as opposed to a game like God of War 3 that would be at the opposite end, towards combat.

Positives
+ The first thing that grabbed my attention was the phenomenal sensory experience going on in this game. The visuals are crisp and detailed even without a high definition television and the environments are by and large a unique landscape. Add to that a soundtrack that blended well into the background, taking center stage only at the most dramatic moments, and my eyes and ears were pleased.
+ Clever platforming is hard to come by, but The Forgotten Sands does deliver. The game starts with basic jumping, wall running, and climbing, then adds the ability to freeze water for a limited time on the fly, then later the ability to “remember” one part of the landscape at a time that is otherwise absent in the present-day version of the palace. The net result of all of this is that most of the platforming retains a fresh feel to it, building on natural levels of complexity from beginning to end.
+ Difficulty. The beginning of the game is by far the easiest and the end is by far the hardest. This sounds like a no-brainer, but I found the difficulty spectrum satisfying and think the learning curve is well-executed, something that is often either neglected or taken for granted.
+ Experience. Every game these days seems to be including role playing game elements and Prince of Persia: The Forgotten Sands is no exception. You gain experience from killing enemies and you can use it to upgrade your myriad of abilities and attributes. The level of customization here felt like just enough, not too complex and not so simple that it felt pointless.
+ Storyline. The story in this game is simple without feeling dull, adding just enough complexity to make it feel worth playing. I could have done without the perpetual, “I have to find Malik!” circumstance, but it was never so prevalent that it became too much of a nuisance.
+ Dialogue. One of the best characteristics a game like this can have is snappy, witty, crisp dialogue. There are several worthy predecessors that set the bar high, but even so, Prince of Persia: The Forgotten Sands delivers. Some of it verges on the melodramatic, but oftentimes I found myself laughing at the sharp wit or having my exact thoughts voiced by the main character. Solid voice acting and a quality script all around.

Neutrals
? Linear progression. I couldn’t decide if this was a positive or a negative and I think it’s certainly subjective, but this game is decidedly a linear experience. Puzzle 2 comes after Puzzle 1 and Room 26 comes after Room 25. There are minor deviations to discover and reach hidden sarcophagi, but I often found them either blatantly obvious or deviously hidden with very little middle ground of, “Hey, that place over there looks pretty cool. I wonder if and how I could get there,” and appropriate follow-up. On the other hand, it was often nice not to have to think about where to go next, unlike the rash of “sandbox” style games that have been popular lately.
? This is, like many action/adventure games, completely a single-player experience. There is no fiendishly competitive multiplayer, for better or worse.
? A short excursion. One play-through of this game, par for a casual action/adventure experience, took me just under 10 hours, in which I completed the game on the default difficulty setting (normal) and earned about 50% of the available trophies. There are unlockables in the form of alternate outfits, double experience, and special challenges, but I personally wasn’t too compelled for another play-through just yet. Your mileage may vary. 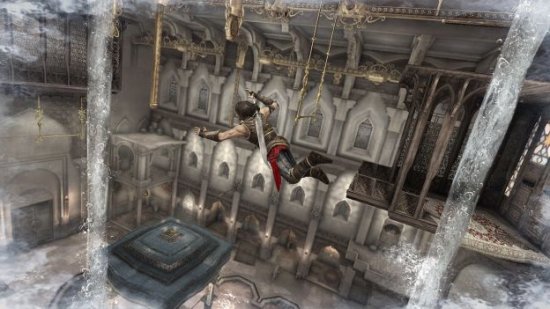 Negatives
– Repetition. After a while, one razor blade looks just like another. Near the end, the traps lose some of their clever appeal of the first 2/3 of the game and start to feel like they’re just piling on more, more, and more of the same thing. Just made it past one spinning buzz saw of death? How about two? Five? Seven? It starts to get a little ridiculous, sometimes resulting in an artificial level of difficulty when the game really just forces you to successfully do the exact same thing as many as seven or eight times in a row without failing.
– Elemental powers. I had really high expectations for these based on my experiences with the demo set up at PAX East, but I think the elemental abilities in the game could have been done better. You get four (earth, air, fire, and water) and of those, I only really found a use for two. Air is the most offensively useful, conjuring up a wind storm to attack and repel enemies in a radius around you and this was the first that I upgraded to level four, making it absolutely the most visually impressive (a veritable whirlwind that picks up and flings up to dozens of enemies wildly around the screen). Earth, on the other hand, coats your character in rock armor, literally making you invincible for several seconds, that duration increasing as you put more points into it. Fire and water bring up the rear, however, with fire granting you a trail of flame that functions exactly like the most useless ability in Diablo 2 and water giving you a direction burst of ice for a few seconds every time you swing your sword. It just seems like air is an incredibly useful and powerful offensive weapon, earth is  a broken and ridiculous defense (Invincibility! On command! Seriously! Imagine Mario with a limited supply of super stars that you could use whenever you want), and fire and water are nigh-useless.
– Land of grids. The vast majority of the platforming and puzzle solving seems to be based around a four direction gridof environmental geometry, despite your character’s ability to move and explore in any direction. At its best, this results in a slick platforming experience without much thought outside of, “How do I solve or get around this?” At its worst, it feels highly limiting, with the slightest oblique deviation resulting in death. Not just death, but death over and over againfor the same reasons. At numerous points in the game, I found myself incredibly frustrated at the game’s super sensitivity to exactly which of the four directions I was pressing on an analog stick that senses hundreds of possible inputs. Add to that a rapidly adjusting cinematic camera and there were many moments where I just wanted to hurl the controller across the room because the game didn’t understand the directions I was giving it. I don’t know if this would be better or worse if the world was built around eight or more directions, but I do know that the four direction geometry has very obvious perks and downsides that are unavoidably apparent in the experience.