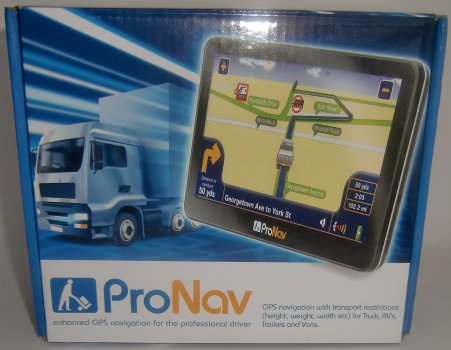 This SatNav is specifically aimed at the professional truckies or anyone driving an oversized vehicle where it is important to know which roads, bridges and tunnels you can safely negotiate with your rig.  And, just as important, you need to know where all the truck stops are.

So how does the ProNav PNN-300, which comes in at a hefty AUD 799, fare in the heavyweight league?

Let’s belt up and find out.

I mentioned before in the brief news item that we posted a few days ago on this ProNav unit that years ago we ventured with my ‘Cruiser & Caravan where I shouldn’t have: down a steep mountain pass. I made it down with difficulty. But if I had one of these ProNav units, I would have known exactly which roads were not suitable for my rig.

It is no wonder that this SatNav already attracted quite a bit of interest from the grey nomads on their website.  Some of these mansions on wheels really cannot go when normal passenger vehicles could safely drive and naturally these roaming greybeards could be benefiting from all the information that the ProNav can give.  Such as: Dynamic Navigation based on your vehicle’s dimensions. You can enter your vehicle’s Height, Weight, Weight per Axle, and even Hazmat Restrictions to find the safest route. Other safety features include potential hazard warnings; including, crosswinds, risk of grounding, sharp bends and any steeps hills you might want to avoid. And that includes speed cameras (at least the ones that RoadSense know about…

It has most of the Australian POI including all the truck stops. 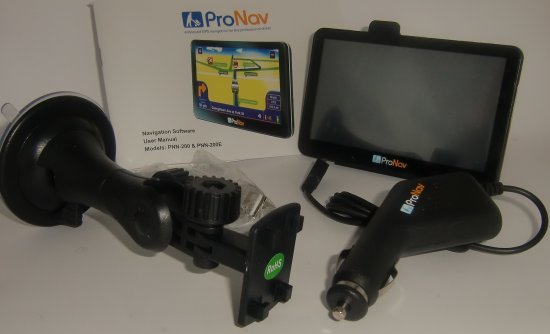 Let’s first have a look at the box itself and what’s in it.  Apart from the unit itself the system comes complete with a car charger, USB cable, windscreen mounting kit and a user manual. It does mention a protective cloth case in the manual (or bag on the box) but such is not “the case”… Would have been handy if you take it with you after the driving is done. More about that later.

t does have a protective screen film which I thought was just one to initially protect the LCD touchscreen in shipping, which is the normal thing for LCD screens. Turns out, this is a heavy-duty screen protector that you can best leave in place.

The manual mentions on the cover that it is for the models: PNN-200 & PNN-200E. Similar but earlier models have been available in Europe and United States for some time, and the developer, UK based Navevo, is now launching into Australia. It does show a picture of the PNN-300 on the cover though…

Just an editorial oversight? The mapping data is provided by Navteq.

The 5 inch screen of the ProNav is one of the largest on the market, befitting the intended audience.  It is also a sharp looking unit, very slim and, dare I say it, professionally looking.  The power button is at the top, the speaker at the back and on the left of the unit you’ll find the headphone jack, a Micro SD card slot and a mini USB charge port.

Despite the large size of the screen it only has a resolution of 480 x 272 pixels. This is perfectly adequate for the navigation screen but it doesn’t do justice to the other features it is capable of. For instance: it can – in its spare time – function as an ebook reader or a photo display. Also a music or video player. So a high resolution screen would have been brilliant here.

But that’s a side issue. On sunny days the screen doesn’t cope too well with glare. This is a common problem for touch screens…

Oh yes, it can be paired with your bluetooth phone and you can even dial the numbers from this unit. Pretty nifty.

How does it do what it was designed for?

OK, let’s turn it on and play with the functions without consulting the manual. Always a good test for our truckie friends, who, like most blokes, don’t read manuals. Surprising actually that they would follow (GPS) instructions…

The first time you use the ProNav you need to click on the EULA (End User License Agreement which no one ever reads for fear of never daring to touch the product again…).

But, every time you switch on the PNN-300 you also need to click on a Safety Notice to satisfy the legal eagles of the firm that concocted the software that we do use the product entirely at our own risk. I can understand their position but, just like airline security procedures it makes the whole process cumbersome, lengthy and frankly most of it is plain ridiculous.

Still with us? Well, the first screen that pops up after you’ve clicked on the Navigation icon is where you can select your home state. Points extra to NavTeq for including New Zealand as part of our overseas territories (just kidding, my kiwi friends!). If only the unit could remember what I last clicked so that we don’t have to go through the whole selection process again. 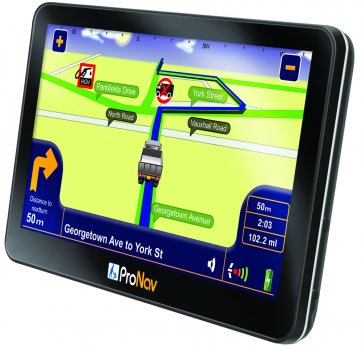 A GPS Fix was reasonably fast acquired for the first time and for this initial drive I just chose the Follow Map icon rather than punching in my destination. Well, this proved what my wife always chided me about: that I tend to drive along the edge of the road… Except, it was much worse than I ever thought possible: the icon of the truck on the display was constantly driving parallel to the road by several meters! Fortunately, on the way back, having chosen a destination, the road hugging was much better.

Extra points also for alerting me to the 40KM school zone (a speed sign with 40 on it pops up with 3 beeps) even though this was on a Sunday and in the school holidays as well. It would be real smart if no beeps were heard if your speed already was below the one for the speed zone…

On speed cameras: good to know that when the database was last updated on 1 July 2009, it shows that the subscription will only expire on 27 Aug 2049…!? So expiry is not only forty years later – a whole FOUR decades! — but specifically on the 27 of August… Bit funny if you ask me!

The voice guidance is good; a pleasant Aussie female voice (the only type a truckie would pay any attention to) and going by the name of Karin, guides you to your destination.

We also used the PNN-300 for it proper purpose, namely navigation for the heavyweights.

We entered in the details of our rig (you can have more than one profile) and saved the setting. Gross weight, axle weight and vehicle class as well as load settings all determine what roads can safely be negotiated and when any restrictions pop up like the icons below you know immediately the type of limitation ahead. You can also select to favour preferred HGV routes (green truck icon). 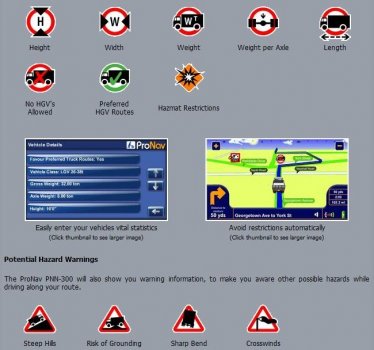 In planning your route you can type in your destination or – often much handier – pick a spot on the map and drive directly to it. Trouble is, in Browse Map mode you’re presented with a large expanse of the Australian outback somewhere west of the Gold Coast. Even if you just picked WA as your home state. It gets worse: In trying to find out “where the bloody hell are you?!?” you can not zoom out from here! Only by panning the map do you get an inkling of where you are. I have an idea that the chaps at Navteq thought it would be handy to plunk us right in the middle of the area that Australia and New Zealand spans! The only saving grace is that there is a bit of a road showing in the top right hand corner otherwise you’d think you landed on a blank screen. Even though – if you zoom in from there – you find you’re on Adventure Way, it’s not the sort of adventure you expect if you’re planning a different destination. Sorry guys, not good enough! For starters, you should be able to zoom out and see the whole continent for easy orientation. Secondly, I don’t want to select Western Australia as my home state all the time. Just leave me where I arrived yesterday…

I’ve not come across a PND that possesses enough intelligence to do the following: you’ve punched in your destination and there are two more or less parallel ways to get there. The system gives preference to the main highway and that’s fine. Except, I want to take the much shorter alternative, parallel road. It constantly tries to reroute me to the main highway even though turning back to get on that main road would add multiple miles extra to the trip! It should be able to figure out that, by now, I really want to go along the other perfectly good road…

Any SatNav system will boast about the huge number of POIs (Points of Interest – like petrol stations, restaurants, etc).

This section, however, deals with Points of Improvements and should be as short as possible.

So here are my gripes:

Being a unit that will be touched whilst driving (even though it ideally shouldn’t) access to navigation functions should be direct, easy and fast. It’s cumbersome and slow. It takes more than 30 secs for the splash screen to disappear! Also getting a GPS fix should be much faster. On occasion it takes more than 2 minutes!

The ProNav PNN-300 is a great looking device and for most professional drivers in the heavyweight category, this PND is probably the only show in town.

That doesn’t mean it’s perfect, far from it, but it will do what it is supposed to do, albeit in a slow and cumbersome fashion.

Most of the gripes can be fixed with a well-designed and faster user interface.

But if you do some serious driving this year this PNN-300 will give you good guidance where it matters.

We’ll update this review with more of our findings over the coming months.

And if there’s a better PND out there for the professionals we’d like to hear about it. 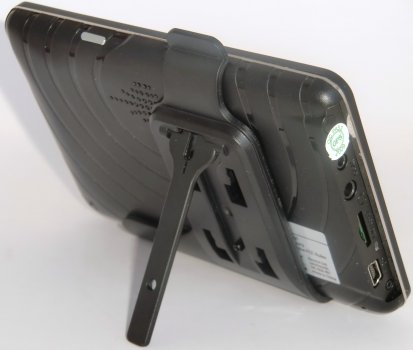 • Navigation based on height, weight, width, length and hazmat