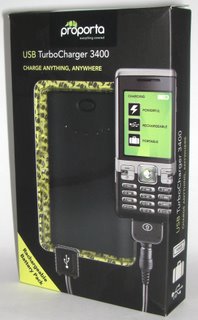 It’s been a while since we’ve reviewed any products from the Proporta stable but as you know they are purveyors of anything that is essential in the way of accessories for our digital lifestyle.
Take for instance this new Proporta USB TurboCharger 3400.  The name gives it away what it is and does and that’s a pretty good indication of the no-nonsense simplicity of this product: it’s your mobile battery when you’re away from home and want to recharge your gadgets.

You have 3400 mAh of juice stored in a compact form, the size of an average mobile phone and probably weighing much less (under 100 grams). Talking about the form factor here: the unit has a smooth, velvety feel to it (love that!) and is very well designed.  I just love it when a product looks good, is simple to use and does what it is supposed to.  There are five blue LEDs above an oval-shaped button.  They indicate the amount of charge left in the unit.  The good thing is that it has been pre-charged so that you when you open up the box there is at least a 50% charge for you to immediately resuscitate your phone.

When you plug it into a USB port on your computer these lights will flash sequentially until they all shine brightly to indicate a full charge.
And it lets you know that it needs to be recharged again when the leftmost LED will flash. A full charge from your notebook takes under 4 hours. That’s fairly slow but understandably so. Charging up your gadget fully roughly takes less than a couple of hours, again depending on battery size.
Another nice design feature it is that a retractable cable can be used both for charging the unit and for charging your other gadgets from the Proporta USB TurboCharger 3400. In other words, it has a standard USB plug on one end and you can have a mini USB plug on the other end to charge the HTC in our tests.  The other plugs it comes with are one for the iPod or iPhone, a Nokia connector and one for the Sony Ericsson and a Mini and Micro USB connector head.  They even included one for the Nintendo DS Lite and if you wanted one for the PSP you can get it free of charge from Proporta! 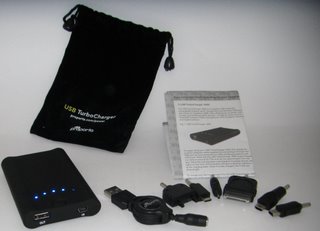 There is no shortage of charging devices to choose from, from solar to fuel cells and anything in between.  We have reviewed quite a few of these devices but I must say the simplicity and beauty of the Proporta USB TurboCharger 3400 takes it to a new level.  The high capacity of 3400 mAh means you can recharge a device several times over which in the case of my Touch Diamond, which needs a recharge before the day is out, means that I will confidently take my phone out and about as long as I have my Proporta charger with me.

If you’re an iPhone/iPod user or have a device without a replaceable battery, a device like the TurboCharger 3400 becomes even more essential. And for just under 34 pounds (that’s British Pounds, not weight!) or a smidgen under USD50, it can be just about the most essential accessory in your arsenal as without juice in your gadget where will you be with the rest of your gear?!

So – how many charges will you be able to get out of this unit?
Have a look at the capacity of the battery in your phone. If it is, say, 900 mAh like in my HTC Diamond, this means I can fully recharge this battery nearly 4 times. This is a rough guideline of course. Reality checks indicate that you can rely on at least a couple of full charges for most of the larger devices, such as a Touch HD.
And that’s pretty good.

Even when praising the simplicity of this design there is still one thing I would have liked to have seen on it: a simple white LED flashlight….  You never know when you would need it and it certainly would last a long time in an emergency!

Top marks to Proporta.
In fact, with a solid 9 out of 10, we have no hesitation in giving the Proporta USB TurboCharger 3400 our highest accolade; our Editor’s Choice Award!