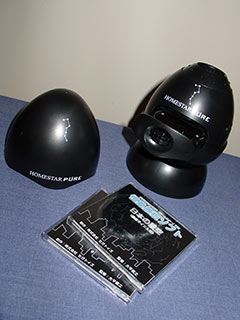 Segatoys’ Homestar PURE is a home planetarium, which like its astronomically expensive museum counterparts, projects images of the night sky onto a ceiling. Unlike its museum cousins, however, the Homestar PURE is small, simple to operate and at $122US, very affordable.

Read on for our full review…

The Homestar PURE is shipped in a compact package which includes two northern hemisphere star discs (one with constellations marked, one without), a slew of Japanese paperwork and of course the unit itself.

Apart from a notice from Brando about the unit not being a toy, etc., everything inside is in Japanese. This isn’t really a problem however, as the Kanji is supplemented with easy to follow diagrams. And besides – after the initial shock of actually owning your own home planetarium – the Homestar PURE is extremely easy to use. 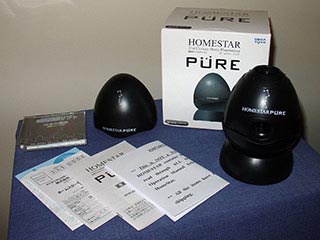 The Homestar PURE stands 160mm tall with a diameter of 110mm. It’s shape is reminiscent of an oversized egg in a suitably oversized egg holder. With the lid on, the unit is very neat and uniformly black except for a small white constellation and the words, “Homestar PURE.” Lifting the lid reveals a slightly smaller egg shaped dome with the same Homestar logo along with the unit’s control and setup mechanisms.

With the lid off, atop the Homestar PURE is a 35mm projection hole through which the stars are beamed up to your ceiling. When in use, a 20mm ring around the opening’s edge is used to focus the star image onto your ceiling. Unfortunately, this focusing ring doesn’t match the rest of the unit’s fairly precise build quality and makes adjusting the focus a little haphazard. More on this later.

Half-way down the side of the Homestar PURE is a small ON/OFF switch which is accompanied by a small green LED (lit during operation). Perpendicular to this switch is a small dial, which allows you to manually rotate the projection.

Inserting a star disc is straight forward and the tray feels fairly robust. Despite their thickness, I’d say the star discs are pretty fragile – think CDs/DVDs – as the image they contain may be tarnished should finger prints or other contaminants be introduced on their surface. 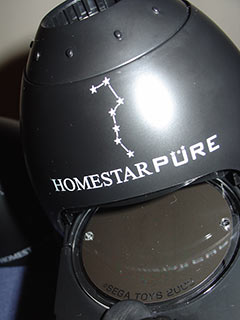 The entire egg can be tilted about 25 degrees from vertical in both directions allowing the unit to project on a wall or at a more distant part of the ceiling. 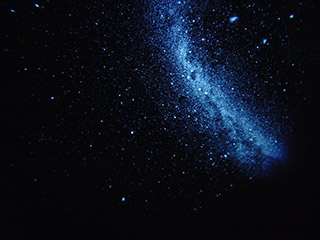 Of course, what most people have been skimming this review for is details about the quality of the actual projection. To put it bluntly, the first time I viewed the projection in a completely dark room I was completely blown away.

The Homestar PURE’s light creates an excellent image when projected at the recommended distance of 2-2.30 metres in a completely darkened room. Brando’s claim that the Homestar PURE can projection 10,000 stars isn’t unrealistic. The stars are vivid and at a glance the image is very believable, with the milky way literally presenting as thousands of tiny points of light. When you sit and study the image – admittedly after the initial shock of how good it looks – you do notice some of the Homestar PURE’s inevitable limitations.

The image at the very edge of the projection – therefore furthest from focused point – lose proportion and become blurred. The other discrepancy avid star watchers will identify is that the apparent high magnitude of brighter stars is created by projecting them as discs rather than points of light. Finally – and this isn’t really a criticism – the room really needs to be pitch black. If you can accept these shortcomings – and I suspect all but the least amateur of astronomers would – you will enjoy a magical sight of the night sky – Minus the freezing wind and pesky cloud cover. 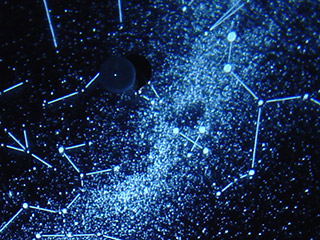 As hinted at earlier, the focusing ring (located around the projection hole) can be used to focus the star image. While its loose fitting nature makes it a little cumbersome, it does improve the image clarity at the centre of the projection, but does little to reduce the blurred outer edges. Using the dial on the side, the star image can be rotated clockwise or counter clockwise. Rotating the image is only as smooth as your hand and while it gets the job done, it highlights the missing motorisation found in the Homestar PURE’s more expensive cousin.

While there is no doubting the Homestar is cool – and it is –  it is the kind of device that I would normally buy, use, and forget. I say normally, because the Homestar PURE has a completely brilliant feature I have neglected to mention earlier. Once turned on, the Homestar PURE automatically turns itself off after thirty minutes.

It may not be immediately apparent but this simple feature takes the Homestar PURE into a league of its own. See, we’ve reviewed ways to wake you up refreshed and now I present you with one of the most relaxing – and brilliant – ways to fall asleep.

Despite its technical misgivings, the Homestar PURE is an excellent product. Not only is it a great conversation piece and a brilliant sleep inducer, but it is easily accurate enough to teach basic astronomy with.

And so now I will say it: The Homestar PURE is awesome – go and buy one now!

The Homestar Pure is available from Brando for $122US and comes complete with two Northern Hemisphere star discs. For those who want to see the Southern sky, Southern hemisphere discs can be purchased as a $68US option.

PLEASE NOTE: All images in this review were taken with a digital camera using a long exposure and have not been touched up or enhanced save for cropping and slight colour correction – The projection is that good! Also please be ware that the photos featured are of a projection of the optional Southern Hemisphere discs which are not normally included in the Homestar PURE package. 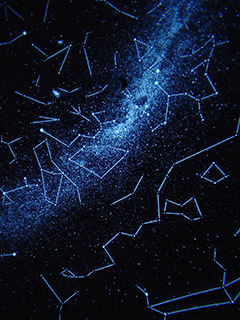