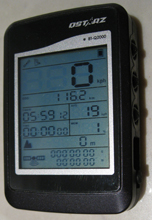 Gadget testing like trying out wireless broadband gadgets and gps technology generally involves a bit of tethering to a location, but with the Qstarz Explore 2000 I have a licence to roam. The QStarz Explore 2000 is a GPS enabled sports recorder designed to record, manage and analyse your sporting movements in the great outdoors. Thanks to Qstarz, DigitalReviews is heading for the great outdoors … risking life and limb in the depths of a cold Melbourne winter, the “swine-flu capital of Australia”

The Qstarz Explore 2000 is a small black box about the thickness of a cigarette packet but smaller in other dimensions.  A monochrome LED dominates the front fascia, and there are just three rubberised buttons on the right side next to a mini-USB port.  Whilst controls for the Explore 2000 appears minimalistic, the simplicity can only be a good thing when you are focus on your chosen sporting activity rather than fiddling around with a plethora of buttons.

The three buttons controls the powering on and off of the Explore 2000 (including enable/disable of log mode), toggling the LED backlight on the LCD and a Tool button that performs the distance unit switch and reset measurements.

The device really performs two main functions. The first being a GPS receiver that displays the latitude, longitude and elevation.  Based on this information it displays the current speed, average speed and distance travelled on the LCD.  The second function is to record all of this information into the 4 Mb of internal memory when the Log Mode has been enabled.

The hardest part of using the Explore 2000 for me is to remember turning on the logging feature.  In my first live testing of the unit I had the unit powered on and a GPS signal lock and went off on my merry way feeling quite chuff with myself.  It was only until some time on the way back to base when it occurred to me that I did not enable the Log Mode.  Logging is turned on by pressing and holding the power button for one second.

The supplied Qstarz PC Suite which comes on a mini-CD and is really the pièce de résistance of the Explore 2000.  The suite includes the QSports V1, Travel Recorder V4 and a GPS driver so that the device can be used with a PC based navigation software.

The Travel Recorder V4 import tracks from the Qstarz and displays your route, speed at each point and other GPS metrics.  Additionally there is the ability to import photos and geotag them.  The entire project can then be exported to Google Maps, Flickr or Locr.  The photo geotag is done by matching the date and time stamps on the files against the same on the route and photos which correlate are added to the route display.  The geotagging information can be written into the photo EXIF.  The Travel Recorder even provides the ability to offset the times in the event of the camera time being set incorrectly. 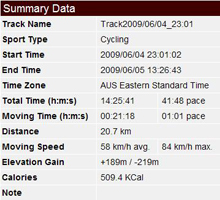 QSports which is the primary application for the Explore 2000 is geared for tracking and analysis of sporting activities.  The logged data is imported from the Explore 2000 after a sport has been nominated an activity for which the log represents.  “Valid” activities include: Cycling, Running, Hiking, Motor Cycling, Rowing, Skiing, Multisport and ‘Others’.

Each imported data represents a track, a summary of the activity is displayed next to a Google Map representation of the route taken and a graph of Speed and Altitude versus Distance or Time.  The Summary Data contains the Start Time, End Time, Total Time, Moving Time, Distance, Moving Speed (average and maximum), Elevation Gain and Calories burned.

There are graphs galore to plot Speed, Altitude, Distance, Time, Acceleration and Total Ascent in any combination.  The Play tab links the graph into the map and displays the progress of your journey both on the Google Maps and the graph in question.

Once a number of tracks have been imported, the Statistics page can then depict activities on a daily basis.  A great feature of the QSports program is that the software supports multiple users so different people can use the unit to track their activities and import the data as separate entities within the application.

Both QSports and Travel Recorder can export the GPS data in various formats, including HTML, Google Earth KML and KMZ, GPX, NMEA and basic CSV formats.  If Google Earth is installed, KML or KMZ data can be exported directly into the software.

The QStarz Explore 2000 comes with additional software such as geotag tools for Symbian and Windows Mobile 5 devices, and other tools for the Symbian, PC and CE platforms.  Notably there is no support for MacOS.

A few gripes with the Qstarz Explore 2000.  As far as the unit is concerned, my personal preference would be to have the log mode permanently enabled, or at least that it remembers my last setting with it.

The log mode indicator only comes on (or off) after the button is pressed and released.  A number of times I ended up switching off the device whilst thinking the symbol will show up on screen.

The software packages are highly functional and have a nice look and feel to it.  On a number of occasions it did crash on me during the play mode.  There are also some basic spelling mistakes in the menu, e.g. widzard instead of wizard.  Also the software packages are independent of each other requiring separate downloads from the Explore 2000.  It is not possible to export data from one package and import into another.

The built-in battery is rated for up to 20 hours, I managed 16 hours of use before it ran flat.

The Qstarz Explore 2000 itself is a simple and robust device.  It does not take long to get adapted to and be up and running.  The QStarz PC Suite is by far the star of the package providing a great tool to help analyse and track activity patterns.  The multi user account support is a definite win in my view.