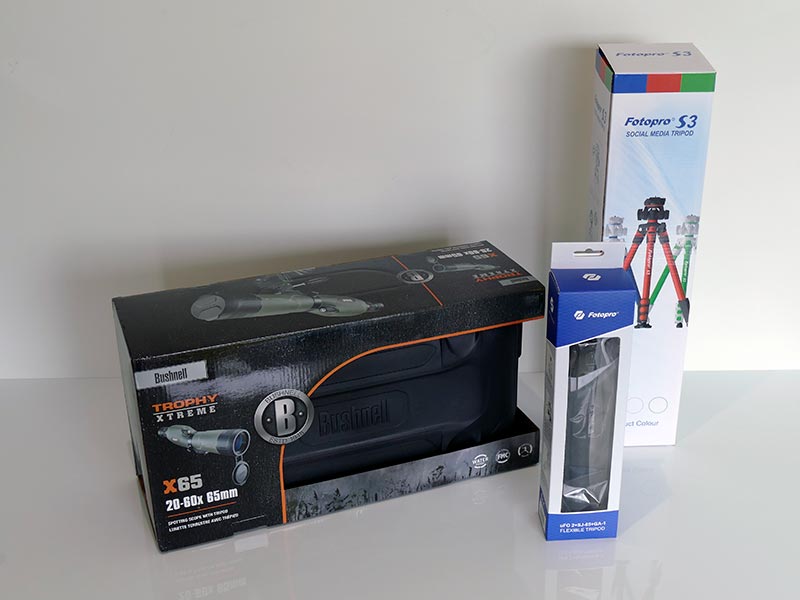 Whether it was due to Hans Lippershey or Galileo Galilei, humans have been using lenses in cylindrical pipes to enlarge their world for centuries.

Read on for our take on Bushnell’s Trophy Extreme Spotting Scope along with some accompanying tripods from Fotopro.

Often giving the user greater magnification and versatility than binoculars, spotting scopes are used for wildlife viewing, hunting and surveillance amongst other things. 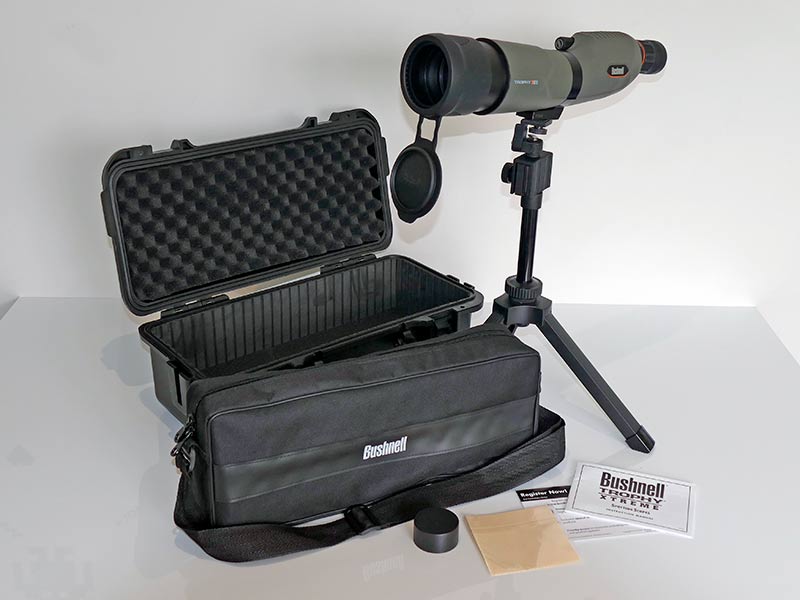 As the name suggests, the Bushnell Trophy Extreme X65 20-60x spotting scope has a 65mm objective lens and a magnification level of between 20 and 60x. It comes packaged in a soft carrying case which can be in turn stored in its (also included) hard plastic case. Also included in the package is a cleaning cloth, an instruction manual and registration card. Rounding out the Trophy Extreme package is a small tripod which fits neatly inside the carry case.

With the sunshade fully extended the Trophy Extreme is just over 40cm long, with a maximum diameter of 9cm at the front lens cap (10.5 including the lens cap flap). The army olive body is made of a slightly rubbery material which is grippy to the touch while at it’s centre is a black metal ring connected to the tripod mounting plate. 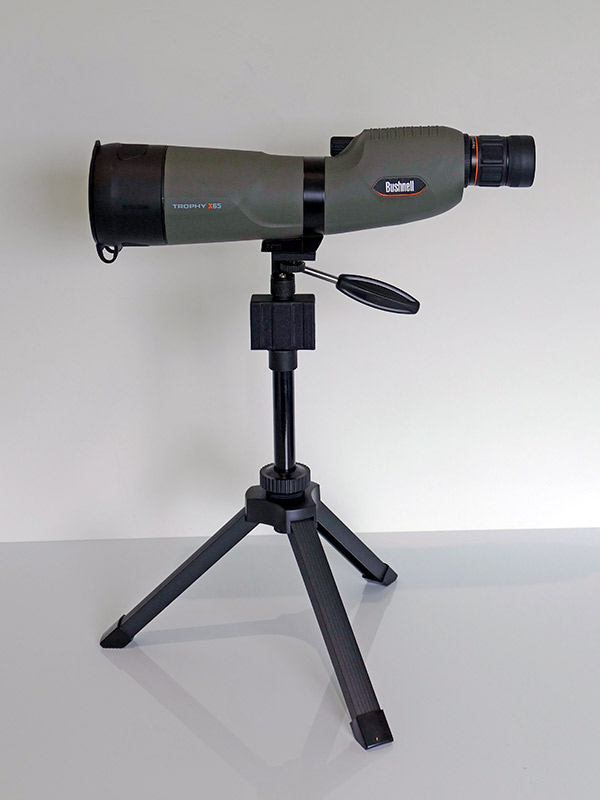 Above this ring is the black focusing knob which matches the sliding black sunshade and black twist eye cup and zoom ring. At just over a kilogram the Trophy Extreme is light enough to carry but with tight seams and quality materials, has a sturdy feel to it.

While the included mini tripod is predominantly made of plastic, its squat stature and industrial design also make it seem quite sturdy. Fully extended, the included tripod raises the spotting scope 40cm from the ground. The tripod’s head is fully rotatable and when attached to the tripod works as expected, however, when removed, the tall design cleverly allows it to sit comfortably atop an open car window. 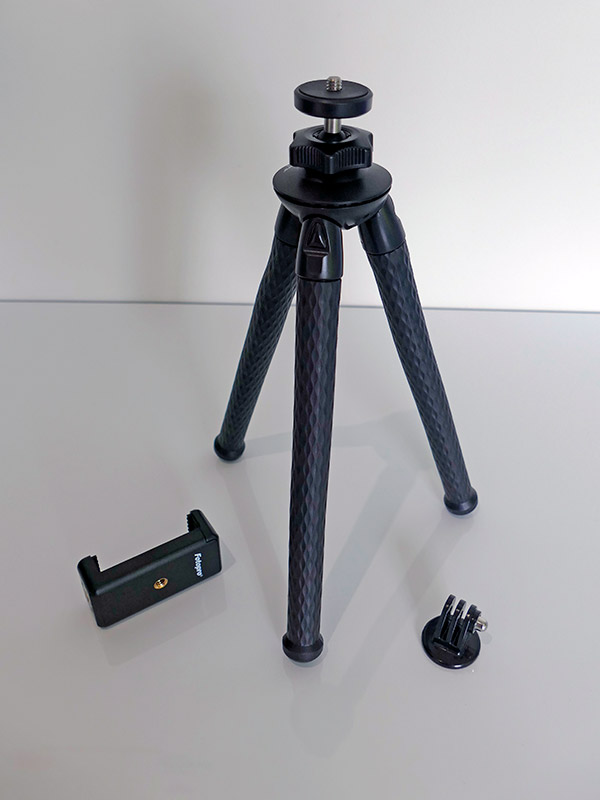 Along with the included tripod, Tasco (the suppliers of Bushnell and Fotopro in Australia) also provided us with two independent tripods to look at along with the Trophy Extreme: The rather poorly named FotoPro uFO 2+SJ-85+GA-1 Flexible Tripod along with the Fotopro S3 Social Media Tripod.

The Fotopro uFO 2 is a small tripod rising just 27cm with straight legs. It’s party trick however is that its legs are malleable and allow it to wrap around objects and stand on odd surfaces easily. The uFO 2 also comes complete with two mounts that screw onto the standard 1/4” ball head: An action camera mount and a width-adjustable phone mount – The mount caters to phones ranging from 5 – 7.5cm in width.

While having some resemblance to a uFO, the ball head offers about 90 degrees of vertical movement. The ball head is quite robust and quickly tightens by rotating the six pointed locking mechanism. Despite its somewhat flimsy look, the uFO 2’s ball head managed to hold our 800g Lumix FZ1000 securely in regular three-legs-on-the-ground mode. 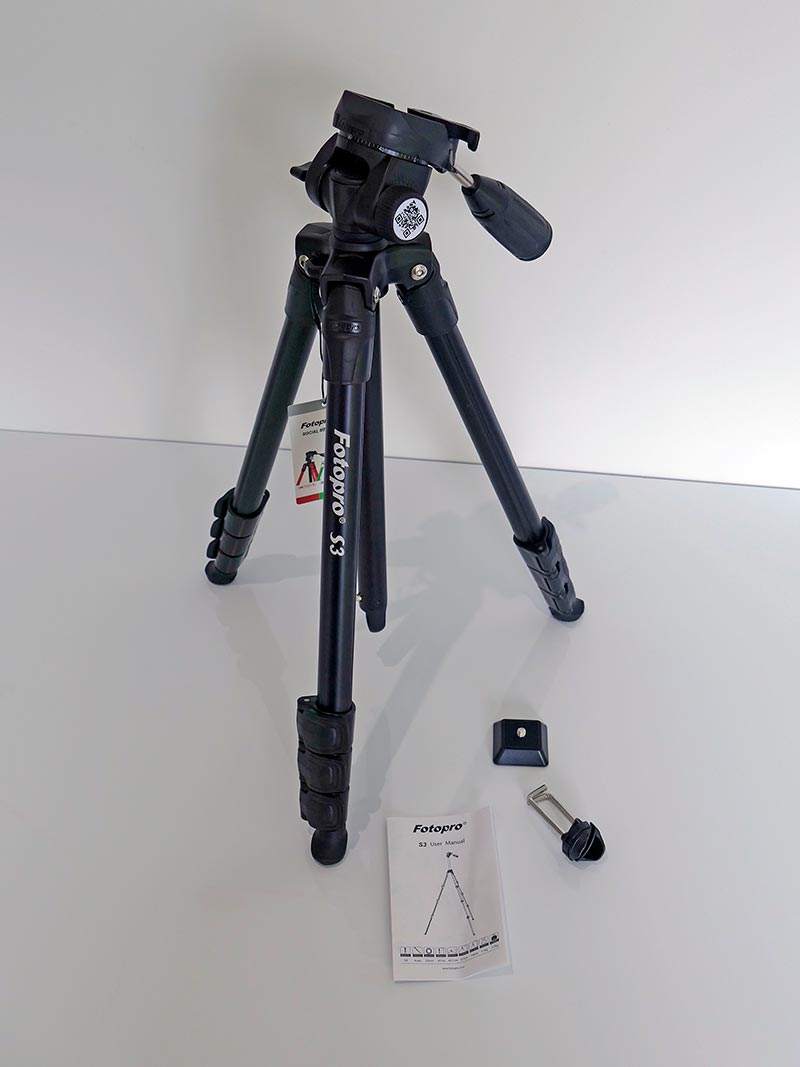 The Fotopro S3 by comparison is more in line with traditional photographic, telescopic-leg tripods. The S3 comes with its own soft carry case measuring 48cm in length which neatly carries the folded up tripod. Along with the carry case, a short user manual is also included.

Fully extended, the S3 rises 144cm from the ground with its four telescoping leg sections fully extended and a fully raised central column. While the locking clips are plastic, the legs themselves are made of metal making the tripod feels solid in hand. 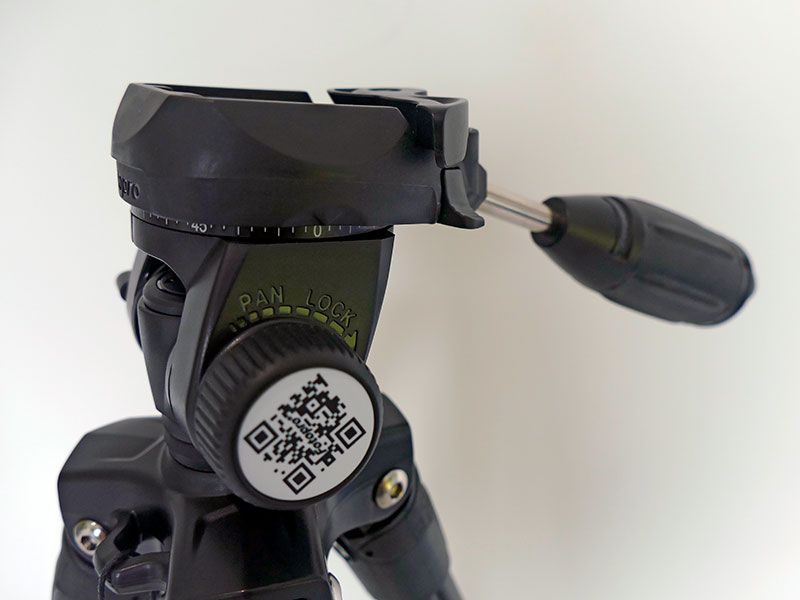 The tripod head is a video camera style one, with a long centrally located handle. Cleverly, the end of the handle unclips to reveal two Allen keys which can be used to tighten things in the field if need be. The mount has a small quick release plate which clicks securely in position as well as a handy bubble level gauge. The head can be tilted 180 degrees and can pan a full 360 degrees, as expected.

The two Fotopro tripods and the Trophy Extreme (and its tripod) all feature standard 1/4” tripod mounting hardware. 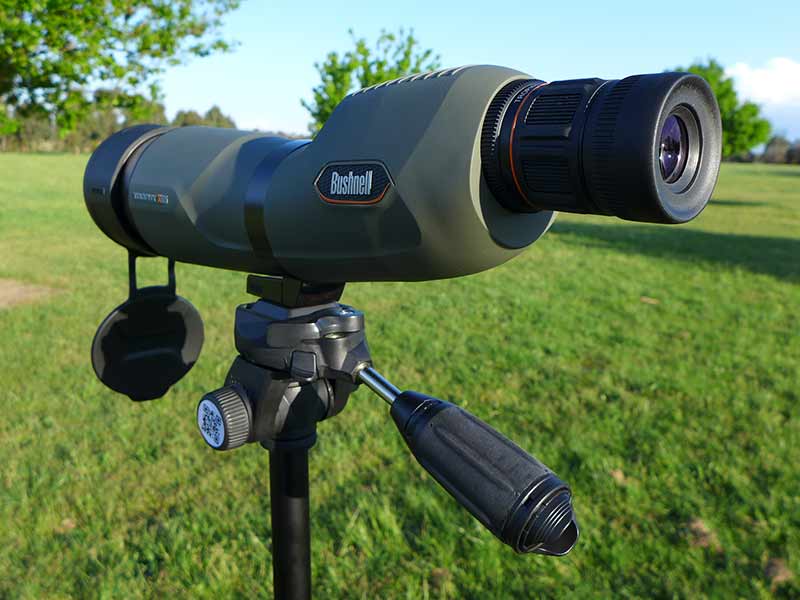 To give the Trophy Extreme and accompanying tripods a work out we took them down to a local park and well.. looked at things. Once secured to one of our two tripods (we didn’t use the uFO 2 as the spotting scope was well over its recommended load limit) we found the Trophy Extreme worked very well right through its magnification range. We zoomed in on distant flora and fauna and found the focusing mechanism was quick and easy enough to capture birds in great detail. Colours were relatively bright and detail was good.

Both the eye cup magnification dial and the top mounted focus dial worked well and the spotting scope was a simple, “point and focus” affair making it incredibly easy to use. 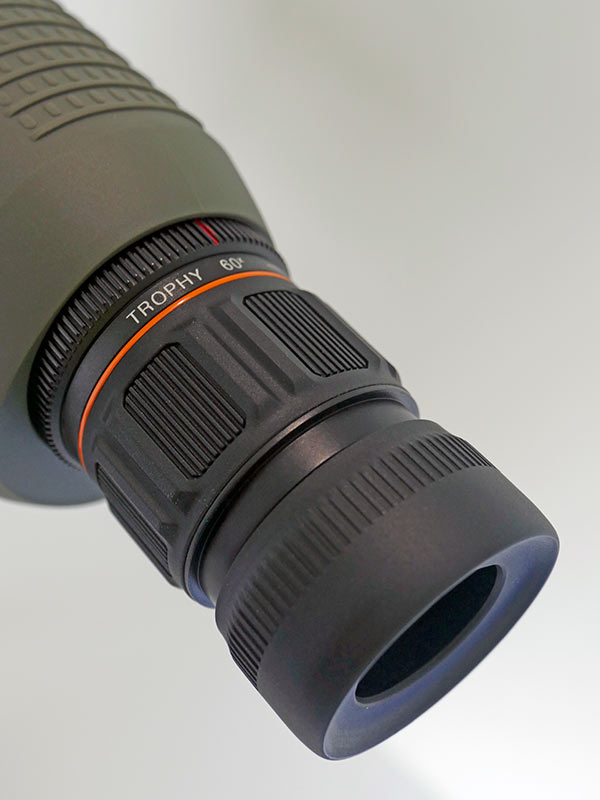 While the scope couldn’t really be used as a hand held due to its magnification, we did find that with a steady hand (and at its lowest magnification) the Trophy Extreme could, in a pinch, be used without a tripod. Sitting on a tripod however produced much crisper and clear images through the multi-coated optics.

Both the eye cup and front lens have built in sun shades which are easily engaged with a twisting motion. Despite being hard plastic, the eye cup was relatively comfortable when in use. The only real complaint we could make of this package was the eye cup protector: Unlike the rubberised (and tethered) front lens cap, the hard plastic cover supplied to cover the the eyecup was slightly too large and fell off at the mere suggestion of tilt. Beyond this minor quibble, the Bushnell Trophy Extreme proved to be a solid unit and while we didn’t have the conditions to verify it, we believe Bushnell’s claims that the Trophy Extreme is both fog and waterproof. 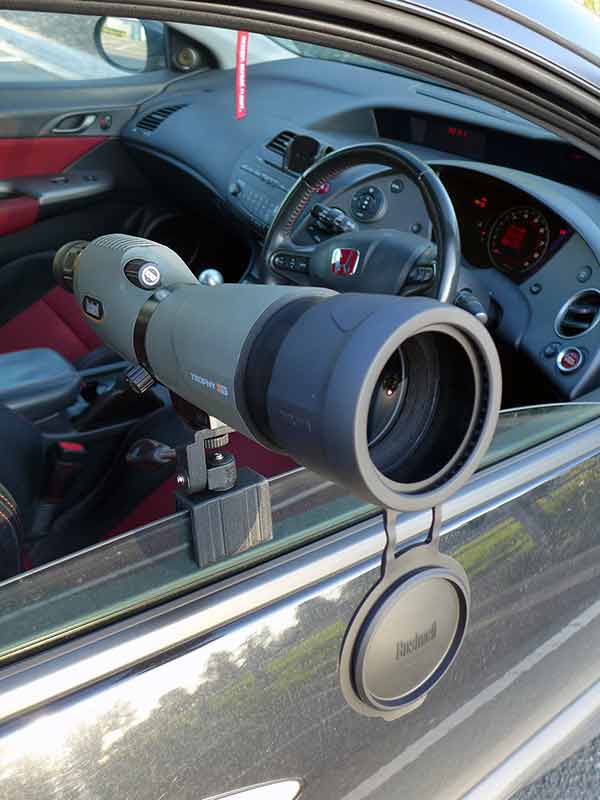 Despite its industrial look, the mini tripod included in the Trophy Extreme package proved less impressive in the field. While it managed to hold the spotting scope, we found it’s steadiness wanting, especially when fully extended and focusing in on distant and highly magnified objects. Having said this, the window mount head worked well when attached to our rolled down car window but if you are serious about mounting the spotting scope on a tripod, we’d recommend using something else. 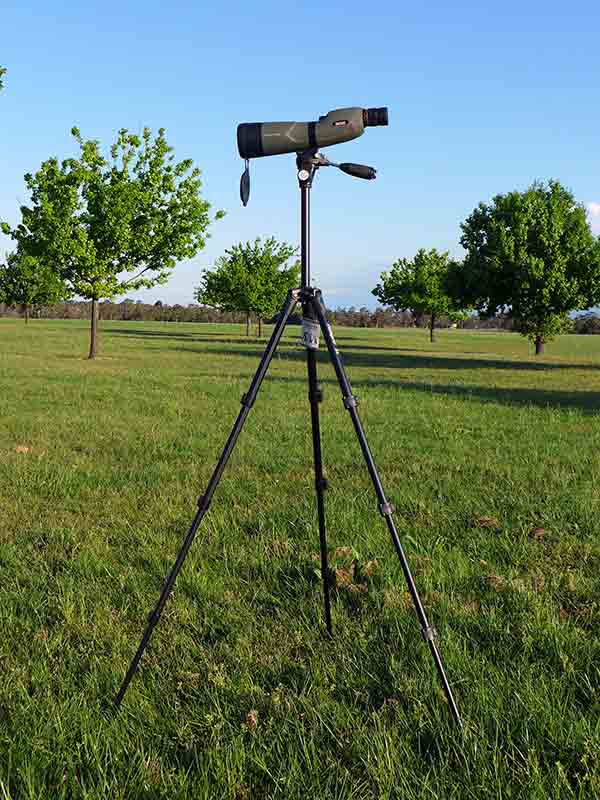 Enter the Fotopro S3. The Fotopro S3 is a solid and contemporary style tripod which we found worked well for not only the spotting scope but also for both still and video photography. In the field the tripod was steady and easy to use, rising up to the height required in seconds. While the four leg sections stand steady, the centre shaft also features a small hook for hanging your camera bag (or other weight) to add stability. Coupled with the Trophy Extreme, we found the height and steadiness perfect for use with the spotting scope and the video head included also made it very easy to tilt and pan at objects quickly.

The inclusion of two Allen keys was a nice touch and the quick release head worked both quickly and easily. All in all the Fotopro S3 is a great tripod, doing everything a tripod should do. The included action camera and phone mounts were a bonus and while we had no action cameras on hand, we can attest that the phone mount was excellent for holding our iPhone 5SE for some test shots. 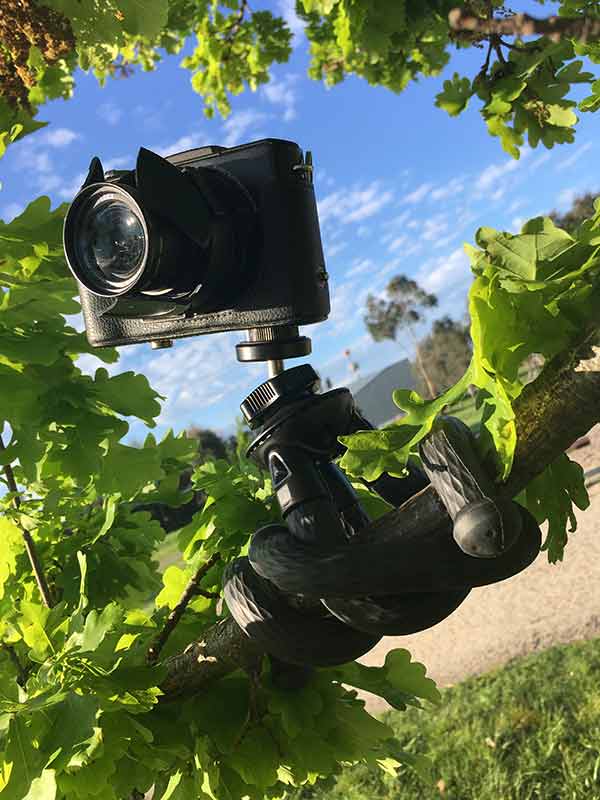 Finally, we come to the baby of this group, the uFO 2+SJ-85+GA-1. Beyond the ridiculous name, the uFO 2 was a great little tripod. It held our Lumix LX7 point and shoot camera without any problem both as a regular tripod and as a /grapple pod/ attaching itself to branches and fences alike. The ball head was secure even at its maximum rated load (The LX7 is 800g) and we found using the tripod with the S3’s included phone mount to be a great combination: In fact, we would argue that bundling the phone and action mounts with the uFO 2 instead of the S3 would make a lot of sense. 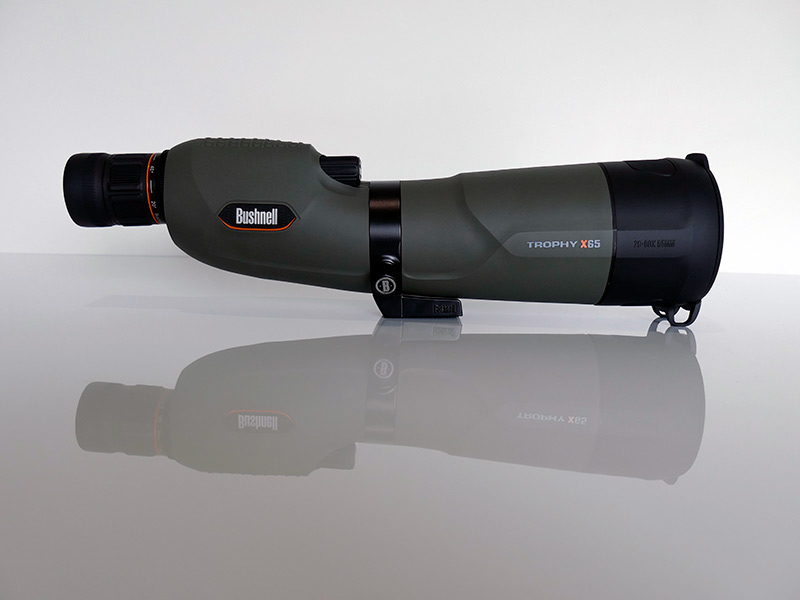 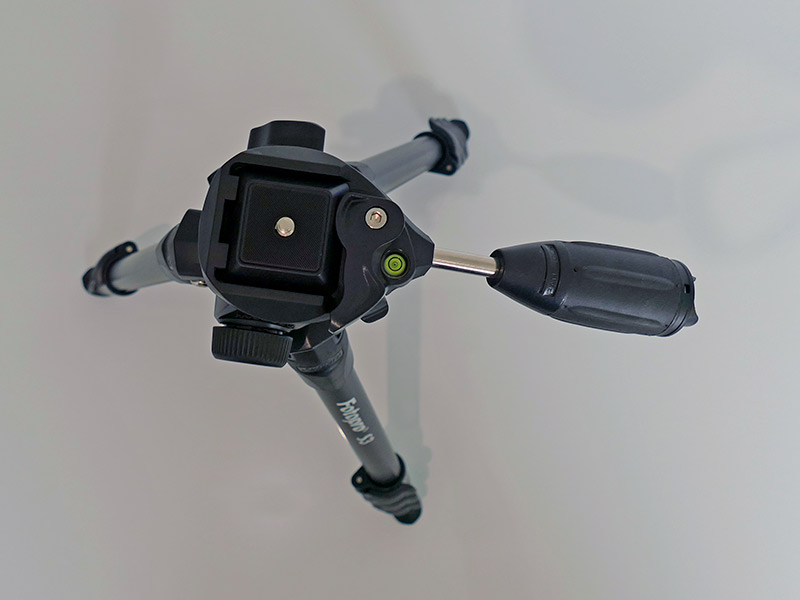 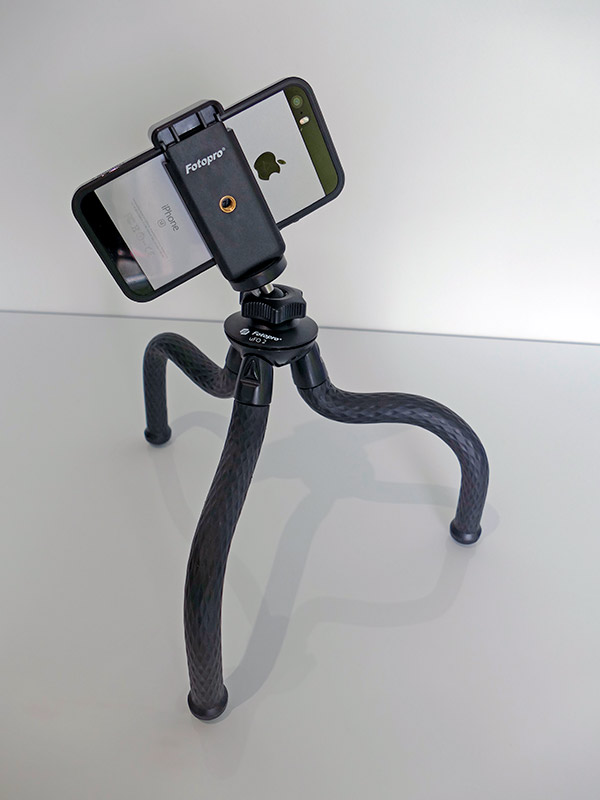 The Trophy Extreme is a durable spotting scope with good optical definition and solid build. We found it very easy to use and other than its rear lens cap, found it to be an excellent spotting scope.

Despite its industrial feel (and the nifty window mount) the tripod included with the Trophy Extreme isn’t really up to the task in the field, which is where the S3 comes in. It is a solid tripod that can easily handle the Trophy Extreme’s weight and size.

The uFO 2, while not up to the task for holding the spotter scope, was excellent for holding our Lumix LX7 point and shoot camera. Not only was it light but it was also extremely good at tucking away into odd places where regular tripods just couldn’t go.

The Bushnell Trophy Extreme X65 20-60 Spotting Scope is available now and retails for $449AUD from the Bushnell for Australia website. The Fotopro S3 Media Tripod has a street price of under $80AUD and the uFO2+SJ-85+GA-1 (seriously, that’s it’s full name) is available for around $30AUD online and from camera stores Australia wide.