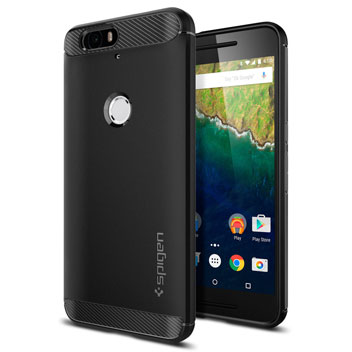 The quest for the perfect case for my Nexus 6p continues.

Thanks to MobileZap , DigitalReviews get to play with the Spigen Rugged Armor Nexus 6P Tough Case.

First Impressions
I have to admit slipping a black case onto my silver Nexus 6p feels a bit incongruous. Those thoughts slip away when I started using the product.

The Spigen Rugged Armor Tough Case looks the good and feels great, with carbon fiber panels at the top and bottom of the case giving it a touch of subtle highlight.

In Use
The case is a single piece that fits snugly around the Nexus 6p, covering all the edges and back of the phone. The camera, flash and sensors required for the Nexus 6p camera to work are adequately exposed for things to work properly, along with openings for the microphone and fingerprint sensor.

The case has a small raised lip to protect the front of the screen, a feature that was combat proven over the weekend when my phone went splat on a car park floor like a hot buttered toast.

The main attraction of this case for me is the slim line fit. The phone itself is plenty big enough without having a bulky case to make it harder for my average sized hands to work with.

Conclusion
Truth be known, the Spigen Rugged Armor has not been taken off my phone since the day it arrived. It has taken over from the official Adopted Nexus 6 case as my daily driver and I have not looked back.