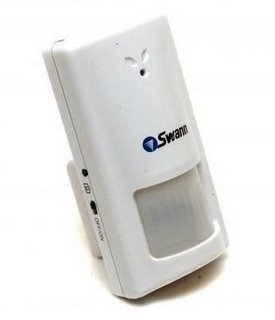 The need for security – often in the form of covert surveillance – is rapidly increasing in our modern world.

Our homes and businesses follow the trend set by governments and law enforcement agencies.

I was looking around for an unobtrusive recording device that would have motion activation and take reasonable good pictures at set intervals.
I think I’ve found exactly that when I came across the Swann Communications Digital Private Eye. And as a bonus it also functions as a webcam.
Let’s see what it is all about.

First off: it’s relatively inexpensive at under USD150 (or AUD141 here in Australia. Prices vary with bundled SD cards of different capacity).
Low cost is important because often you may need more than one device to secure a location.
Plus, if it’s out in the open and it gets stolen it won’t break the bank (unless they break into your premises after they’ve pinched the Digital Private Eye!).
That’s why it needs to be unobtrusive, blending into the background or looking like a normal motion detector.
Well, the Swann Communications Digital Private Eye looks exactly like a standard PIR or Passive Infra-Red device.
The camera is that tiny pinhole located in the Swann logo. Clever.
Only close-up inspection might reveal it’s a surreptitious recording device. Every 3 secs an image is taken when there’s movement in front of the camera.

It’s pretty straightforward with the clear instruction booklet. One key point is that the device goes through about 30 secs of testing before you can switch on the unit itself.

Normally, the Swann Communications Digital Private Eye is powered by mains but for short periods you can also hook up a 9V battery which dangles from the unit. Bit weird if you ask me as the device seems to have enough empty space inside to accommodate a 9V battery compartment…  Would be good in case of mains failure or tampering with the power to have that backup.

The Digital Private Eye comes with a 128MB SD card. Get yourself a proper 1GB card as this unit takes pictures in rapid-fire succession: a hundred shots in 5 minutes! A 1GB SD card should accommodate about 30.000 images taken by this pinhole camera.

Getting a bigger card is also important from another perspective: the supplied SD card was very flimsy and broke! Why it was built in two halves I don’t know…

The images at a maximum resolution of 640×480 are pretty good quality in good daylight. Certainly good enough to identify intruders or check on the nanny. Yep, that’s one of the touted uses! It also says on the packaging that you should monitor your visitors, check on your kids and see if the cleaning lady is indeed cleaning. Well, well, well, does it say something about the company we keep or the company we are?

Anyway, to protect our visitors or the nanny I’ve just used the camera to photograph some local wildlife…

The unit also took some shots at night but the camera obviously is not capable of turning out images of any quality in low light situations. It has a viewing angle of about 60 degrees with a range of about 4.5 metres. I’ve had mixed success initially because on windy days the movement of tree branches would also trigger the camera. That fills up the card pretty fast! Of course, this unit is mainly meant for INdoors use…

It wouldn’t be a bad idea to have newer photos overwriting the oldest ones if the card fills up, just to make sure that after an "event" you have the pics to prove it! That’ll be tough if the card had been filled already!

At any rate, before you put the Swann Digital Private Eye to work, have a few test runs in the environment you want it to operate. That’ll iron out any bugs with positioning, lighting, etc.

Conclusion
I have not bothered to test its merits as a webcam. Few people would buy it for this purpose. But it’s nice to know that it can.
If used as advertised – indoors and with good lighting conditions – it will work as expected and might prove what you were looking for, whatever that is… As such it can have been worth its weight in gold.

There’s one drawback to being able to use these images to "prove "your case: the pics are not time stamped. Perhaps it’s good to include a clock and calendar in your background if you anticipate any suspicious behaviour!

Swann Communications has a huge range of security related devices for the home or business. This PrivateEye is a simple standalone solution but we might bring you something more sophisticated from their stable next time. Stay tuned (or in the words of our government: Be alert but don’t be alarmed…).

You never know who’s watching you…