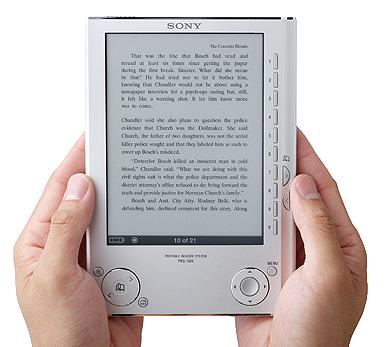 Ever since the advent of the laptop and the first portable media devices, being able to access information on the run has been a hot topic in the world of consumer technology.

Today, the battle rages on, but a new front has opened up; the possibility of bringing an entire library wherever you go. Read on to learn about the future of your reading experiences.

Vying for the top spot of who gets to back this important dimension of media consumption and dictating how it’s going to be done seem to be Fujitsu, Sony, Amazon, and newcomer iRex Technologies, among others. Also entering the arena is technology giant, Apple. The latest products they bring to the field are the ST5112 slate tablet PC, the Sony Reader, the Kindle, the iLiad, and the iPod Touch or iPhone 2.0, respectively, and each is a unique stab at quenching the varying thirsts of consumers.

The Sony Reader seems to be one of the most economic choices (featured in the picture above), sitting at a comfortable $299, but it seems to also be the most limited. While it boasts an impressive battery length (the website claims that one could read “War and Peace” five times before recharging) and an E Ink display readable even in direct sunlight, reading is about all you’re going to be able to do with the Reader. The device is strictly read-only, downloading content from a Wi-Fi or USB uplink and displaying it on the 8 level grey scale 6” screen. The Sony Reader can store approximately 160 eBooks and is able to be connected to Sony’s eBook store online. More information is available at www.sonystyle.com. 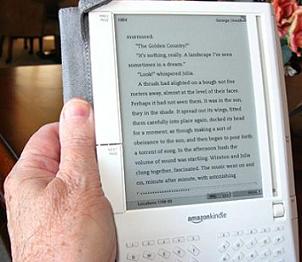 Similar to the Sony Reader, Amazon has also released their take on the portable book and document market, the Kindle, at $399. The Kindle is almost identical to the Reader, but sports versatile EVDO networking and a host of other features, such as a built in keyboard, internal dictionary, and document searching functions. In the face of these extra options, however, the Kindle does have a slightly heavier price point, as well as other hidden charges, such as charging to convert self-emailed documents into a format readable by the device and somewhat cost-inflated “Kindle Price” titles from Amazon.com (it should be noted, however, that the Kindle’s wireless network itself is free, even if everything that can be done with it costs something). Still, it has a formidable array of capabilities, a decent battery life, and a screen almost identical to the Reader, making it strong competition. The Kindle can be found at www.amazon.com/Kindle-Amazons-Wireless-Reading-Device/dp/B000FI73MA. 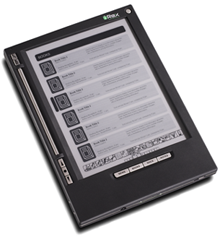 At the next level of versatility is the epically named iLiad, weighing in at $699 and produced by Netherlands-based iRex Technologies. Expanding upon the functionality of the Sony Reader, the iLiad incorporates Wacom Penabled writing technology, allowing for note-taking, drawing, and stylus-based games, amongst an improved 16 level grey scale, 8.1” E Ink display and expandable hard drive of up to 4gb. Software is also available to convert notes into digital text, making the iLiad that much more useful, especially to students. The iLiad can be found at www.irextechnologies.com/products/iliad. 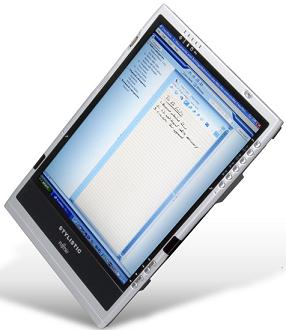 Fujitsu ranks in at the upper price echelon, bringing forth their latest incarnation in slate tablet PC technology, the $1,899 ST5112. As a slate tablet, the 5112 attempts to fulfill the reading roles that the Sony Reader and iLiad also do, but while incorporating further portable functionality. Operating on a Windows XP for Tablet operating system and flexing an impressive 80gb hard drive and 10” screen, the 5112 appears to be everything that the Reader and iLiad are, but in excess. The battery life for a 5112 is excellent for a tablet, but terrible for a portable reading device, lasting only five hours before requiring a recharge. Is it worth it for what is essentially a more expensive, less functional laptop that can be drawn and written on? More can be found out about the ST series at http://www.fmworld.net/globalpc/products/tablet.html,

Lastly is unique contributor, Apple, with the two platforms it has recently released that are capable of running its new iPhone 2.0 software. The iTouch, coming in 8GB, 16GB, and 32GB forms and ranging from $229-500 is the incarnation with slightly fewer features, sporting a WiFi connection and a slick touch-screen interface unlike any other portable device. The iPhone 2.0, the iTouch’s more powerful cousin, has the same touch interface but comes with G2, G3, and EDGE internet, a built-in camera, and the obvious microphone and speaker necessary for telephony. The iPhone 2.0 ranks in at $200 plus the price of a monthly phone and data plan. Key to their functionality as readers, in this case, is the ability to interface with the iTunes Application Store, where such applications as the free Stanza can be downloaded. As an example, Stanza for the iTouch/iPhone interfaces with a Mac version of Stanza in order to download eBooks from a laptop or desktop and is capable of reading Kindle books from Amazon. The major downsides of each are the limited battery life, at approximately four to five hours for video, and the 3.5” display that can be a little difficult to read at times. With their unique features and price point, however, Apple’s products do make a strong contention for all portable media; eBooks to music and movies and everything in between.

It is clear that the battle for the portable document market is only just beginning in earnest. The Reader, iLiad, 5112, iTouch, and iPhone are all viable options for reading on the go, but consumers will need to make tough decisions about just how many features they do, or don’t, want on their device, what size they’re willing to bring with them, and how much they want to think about battery life. Will readers continue to buy their books in print or will they turn to one of these devices for electronic reading on the go? Only future sales can settle the debate for sure.