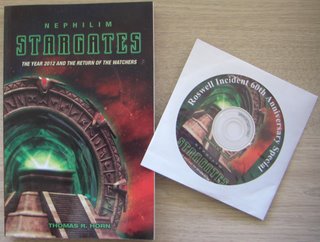 Last year we reviewed a challenging book, called The Nephilim Imperatives and particularly since that book I started to read widely on the UFO phenomena, transgenics and the rather disturbing history that is about to be repeated again.
Anomalos Publishing just sent me a pile of books and Audio CDs on this genre over 5 inches high!
Some of the exciting titles: The Ahriman Gate, The Omega Conspiracy, PSYCHOTRONIC WARFARE and CONSPIRACY THEORY.
Also part of this pack are the books Alien Intrusion and The Gospel According to Science Fiction.

I’ve bitten off the first half an inch in reading Tom Horn’s Nephilim STARGATES – The Year 2012 and the Return of the Watchers.
Tom is arguably the best-known author on this very topical subject and his latest tome strongly suggests the world is about to enter into unheard-of upheavals soon.

Students of end time events have always understood various parts of the puzzle, both from biblical prophecy, history and current world events. Tom Horn has an uncanny ability to tie the key happenings together from his scientific and theological backgrounds.
One of his latest books, Nephilim STARGATES, is a prime example of this and perhaps also will become a primer for folks new to this genre. He discusses a lot of new concepts if this is virgin territory for you.
Let’s start with the title.

What are STARGATES? We’ve perhaps come across this term from the X-Files or the Stargate TV series.  Stargates are described as being portals or wormholes through which beings can travel from their extra-dimensional habitat to our earth and vice versa. They are purportedly used by Nephilim.
As I mentioned in my previous review: “The word "Nephilim" is not even in the dictionary.  However, it is a term that is used in the Bible in a very intriguing passage.” Just like Terry James in his book, The Nephilim Imperatives, Tom Horn also “takes a rather uncommon view of some of these [UFO] phenomena which not everyone will agree with but which does harmonise a lot of the unexplained and weird things that are happening around us.”

The subtitle: “The Year 2012 and the Return of the Watchers” also contains a few key words for those familiar with these concepts. 2012 is the year that according to the ancient Mayans the world will end. The Watchers are identified as powerful (fallen) angels who descended from heaven to earth and produced the giant Nephilim which we read about in the mythology of many nations and also in the book of Genesis and other biblical sources.
So there are quite a few hard-to-swallow concepts dished up here already. Mix in the UFO and abduction phenomena, demonology, numerology plus the fields of cloning and interbreeding and there’s enough material to spin your heads!

Whilst the book is easy to read and well written, the concepts are very challenging and also very disturbing. If it is all true – and the book is well documented – we need to be as informed as we can possibly be. As they say: “The truth is out there”, and whilst more and more countries have decided to make disclosure of their UFO files, there’s a lot more truth to be discovered as the world moves toward full disclosure. Except – that’s only part of the story. Full disclosure would only explain that these phenomena do happen. The much bigger issue of WHY is sketched by Horn in this and his other books. 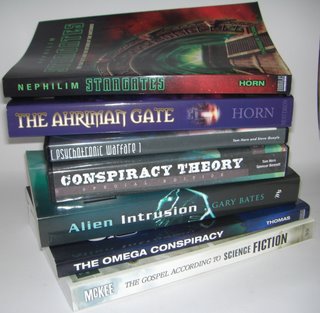 Tom told me that he wrote the whole book in just 60 days and rushed it to press.
He plans to re-release an amended version of this book and expand it when time permits.
I don’t know if that is a recommendation for what obviously is a well-researched book.
Fortunately, it doesn’t show too much that it was a rush job.
There are a couple of “gotchas” when he writes, for instance, about “the principle idea” (p.64) rather than “the principal idea”.
But hey, even I had to look it up in the Grumpy Grammarian Bible to make sure I knew the difference…
Another oversight is the jumbled Contents page where page numbers don’t line up with the chapters.

There is, however, a more serious issue in the lengthy quotations from Horn’s fictionalised account of end time events in his The Ahriman Gate. By lengthy I mean well over a couple of dozen pages cited.
In a non-fiction book that is a serious distraction as well as a detraction since it takes away from the plausibility of his already hard-to-believe statements.

When Horn gets to expand the book in a second edition I would seriously recommend adding illustrations (and quoting less from his own other books).
Many of the historical facts that we may be unfamiliar with can be illustrated with archaeological evidence. It’s difficult enough to convince sceptical readers of some the concepts and his explanations so the job can be made a lot easier with pictorial proofs.

An interesting video that came with this book is entitled: Roswell Incident 60th Anniversary Special which features Tom as a speaker at this event. I would recommend you watch this presentation first as it sets the scene for the concepts in the book and introduces the author and his background in a gripping lecture.

As with most books in this genre, a lot of people will take issue with the perspective Tom Horn takes to explain all these phenomena and what’s behind it all. Personally, I have some difficulty with the convoluted numerology employed to arrive at certain dates or locations.
However, if this book makes you sit up and think I would surmise that Tom will be happy with the result.

I can highly recommend Nephilim STARGATES if you are interested to find out about these things or if you just want to be challenged. It will not sit well with everyone, nor is it intended to.
The book is published by Anomalos Publishing and available for the reduced price of $10.
Alternatively, you can go for the bundled approach and collect most of these books as pictured above for just 60 bucks which is half the normal price.
For more books from Tom Horn make sure to go to his Web site RaidersNewsNetwork.com.

RNN is my first port of call every day for up to date news on these esoteric subjects – stuff that you won’t find in the main stream press but infinitely more important to our survival.