Up Close with the Carson MM-840 eFlex Microscope 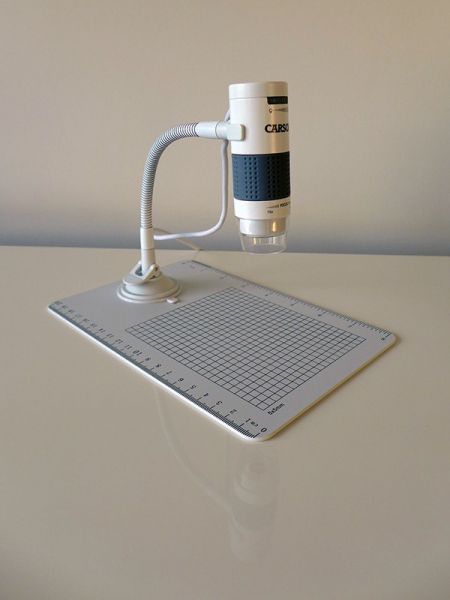 Microscopes have traditionally been used for scientific discovery and education but with the advent of inexpensive digital USB microscopes, the minutia of every day objects is now visible by everybody.

Read on for our experiences observing the world beneath our noses with Carson’s MM-840 eFlex Digital Microscope.

Bourne from his work on the telescope, Galileo created what would eventually become known as the microscope. Despite the 400 year interval, Carson’s MM-840 microscope still follows the same basic principles, albeit with USB connectivity. 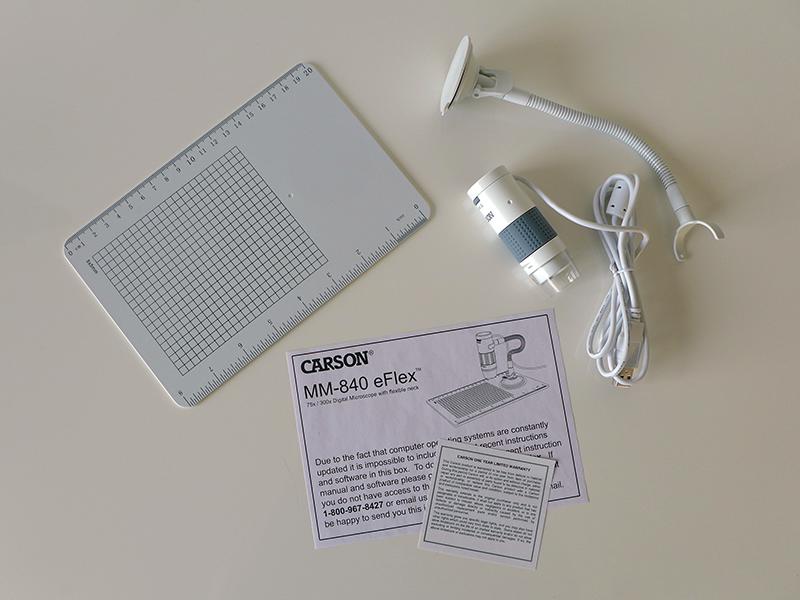 The MM-840 package is made up of three basic components: A flat base; A flexible suction cup neck stand and the of course, attached to about 1.3m of USB cable, the actual microscope itself.

All items have a crisp white science look which is offset with neat black and grey detailing. The microscope itself is an 8.5cm long cylindrical shape with a diameter of 3cm. The whole of the top is a touch sensitive photo button, while the side features two sliding controls: The small dial controls the amount of light emitted by the built in LEDs while a large control encompassing the whole cylinder is used to control focus and magnification. The business end of the microscope has a 2cm long clear plastic shroud which protects the lens which is in turn surrounded by four bright LEDs. 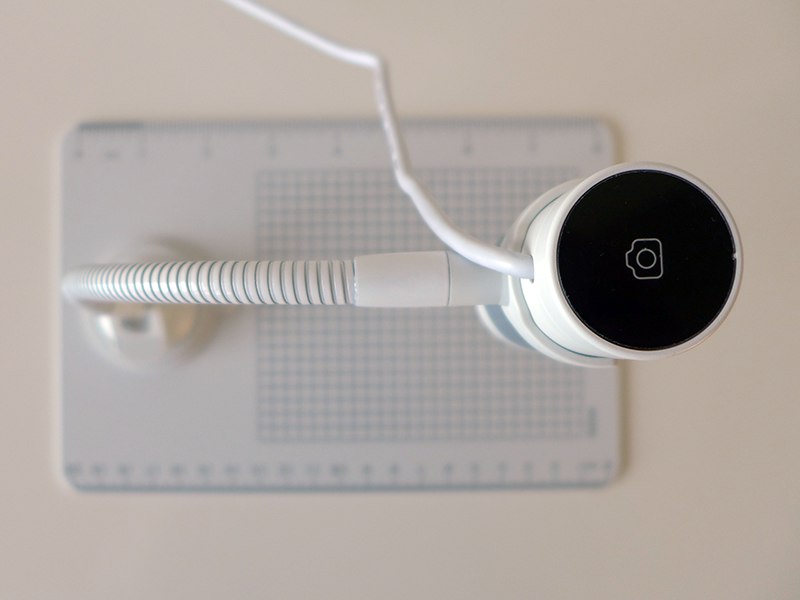 The flexible neck stand extends up to 22cm and is predominantly made up of an unsurprisingly flexible metal coil. The base features a mechanically assisted suction cup which works with the included base (or any smooth surface) while the top of the stand has the plastic semi-circular microscope mount. The mount has two small protrusions which allow the microscope to sit securely and keep things steady. 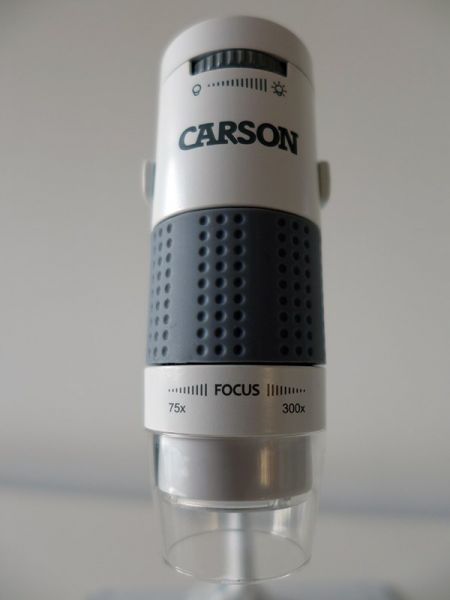 The matching base measures 21 x 14cm and despite its powder coated metal look, is made of fairly a rigid plastic. Printed on the long sides of the base are 20cm and 8″ rulers and inside is a 10 x 12cm grid of 5mm squares.

The build quality of all components is excellent and all items maintain the same neat sciencey look and feel. 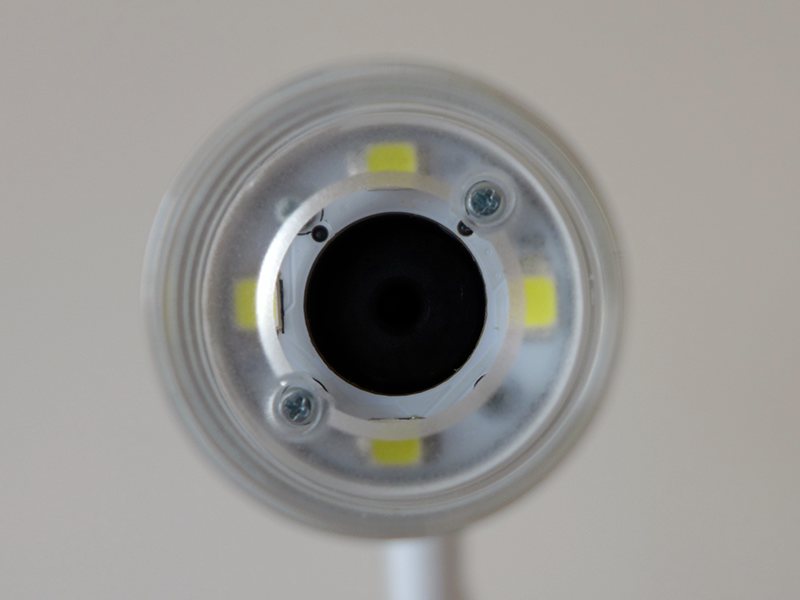 While no driver CDROM is included, Carson does include a short information sheet which points users to Carson’s eFlex website to download the manual and latest drivers. In the unlikely event a user does not have Internet access, Carson provides a toll free (US) phone number to organise having these items sent out via regular mail.

Beyond this, a small warranty card is also included detailing the MM-840’s one year limited warranty.

We tested the MM-840 on a MacBook Pro running 10.11 El Capitan and found the general experience to be good bar a few quirks.

Firstly, once connected to our Mac, the camera did not appear to function. Even after we installed the Digital Viewer software from the Carson website, nothing happened. The download was quite small at only 7MB and it was refreshing to see that in this day and age of bloatware even the Windows 10 software was only a little over 2MB. 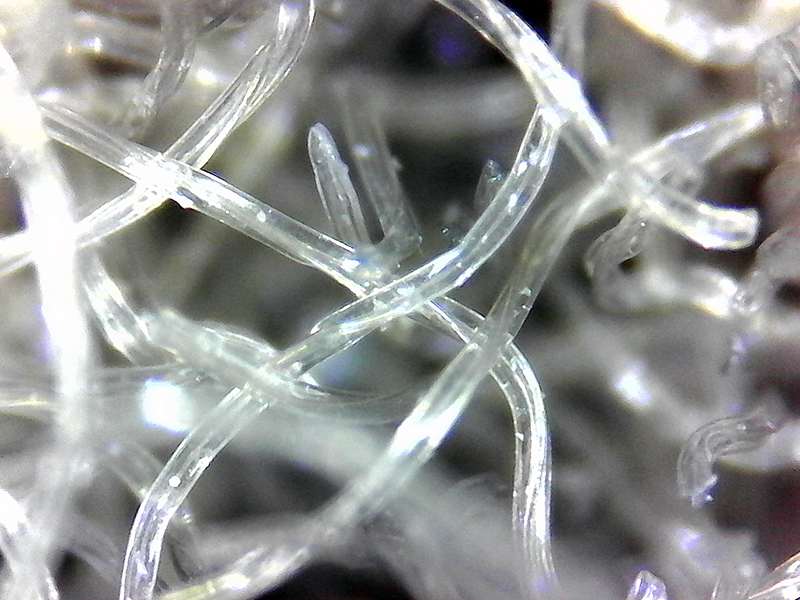 Unfortunately, even after the Digital Viewer software was installed and running, the MM-840 still didn’t show any signs of life. The software instead just displayed an image from the MacBook Pro’s built in iSight camera. After some poking and prodding, we dived into the Digital Viewer software’s settings page and discovered a second camera device listed, which was cryptically titled, “USB2.0 Camera.” Thankfully, selecting this device finally brought our MM-840 to life.

The basic operation of the MM-840 both through its hardware buttons and the Digital Viewer software interface was quite easy. From a hardware perspective, the touch sensitive plate on the top of the MM-840 quickly captured images, although it should be noted that when handling the microscope, we did record some accidental captures from time to time. Both the focusing ring and LED brightness dial worked as expected and handling the MM-840’s solid built allowed it to be handled confidently. The Digital Viewer software allowed for changes in resolution, timed image capture and picture enhancement settings, including hue, saturation, brightness, contrast and sharpness. 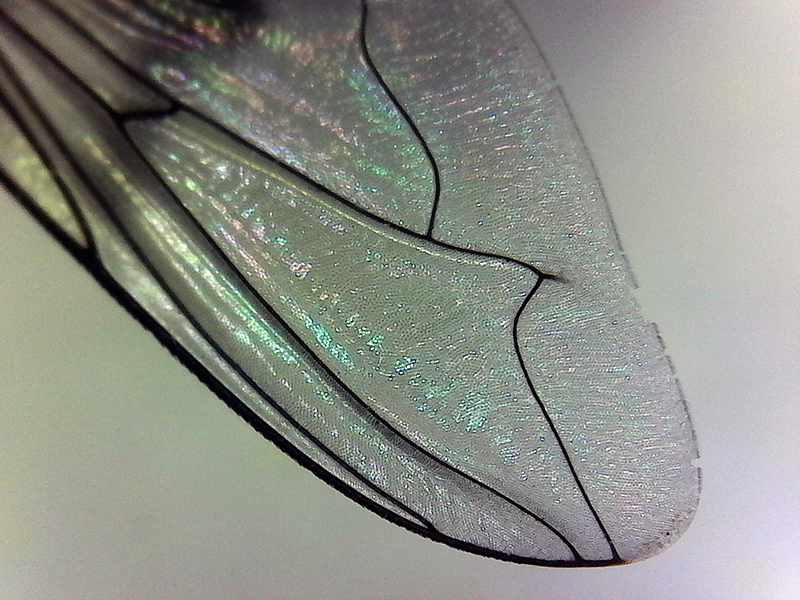 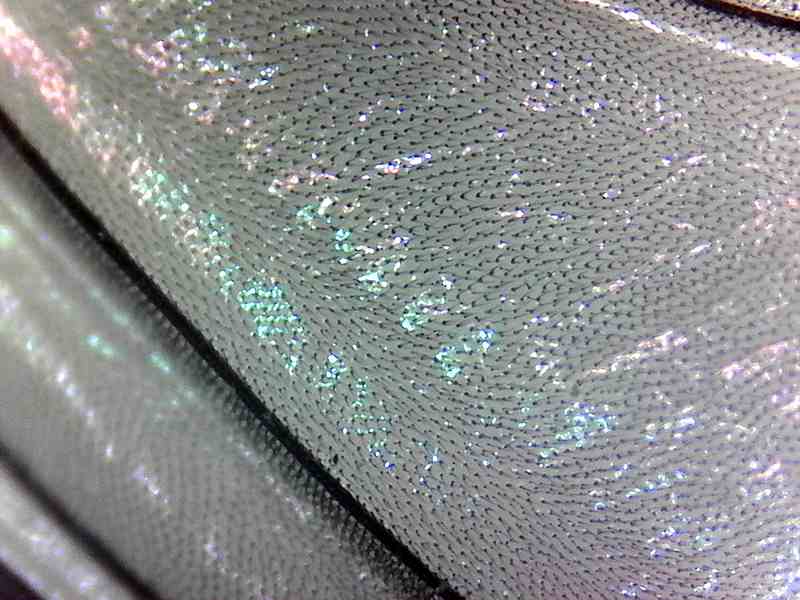 he software also allowed the MM-840 to capture video and while the interface was reasonable some easy to use, there was one quirk in particular that made it less than ideal. Mirroring the initial setup problems, we were dismayed to discover that the Digital Viewer software failed to remember any of its previous settings between launches. In essence, this meant that we had to tell the Digital Viewer software to set the MM-840 as our preferred capture device (and even its capture resolution) each and every time the software was opened.

While this grew tiresome very quickly, it did not stop us from capturing some interesting images from the microscopic world. The resulting images were relatively clear and the focus ring allowed to get sharp images at the MM-840’s 75x and 300x magnifications. The hardware performed well and other than the aforementioned settings retention issue, the software worked quite well, complementing the MM-840’s hardware features. 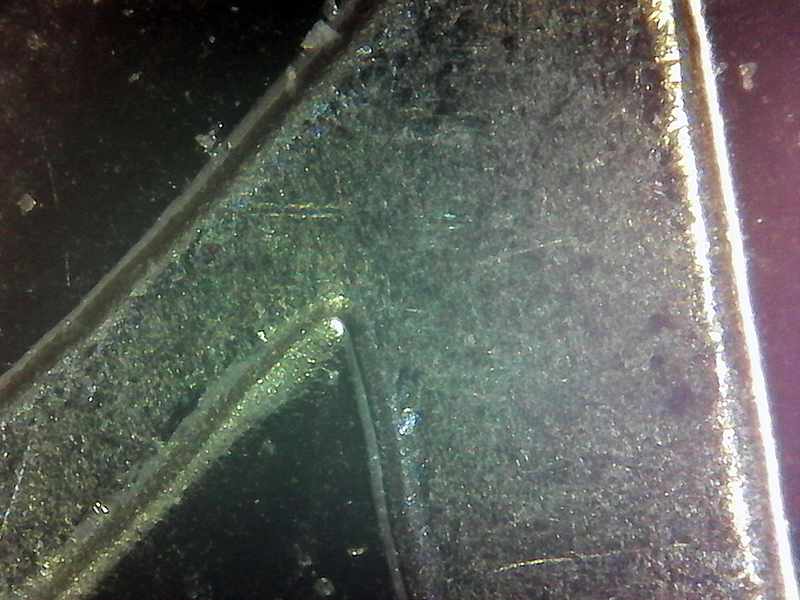 f you can get passed the re-entering of settings each time you sue the camera, using the Digital viewer software to capture images was really quite good. 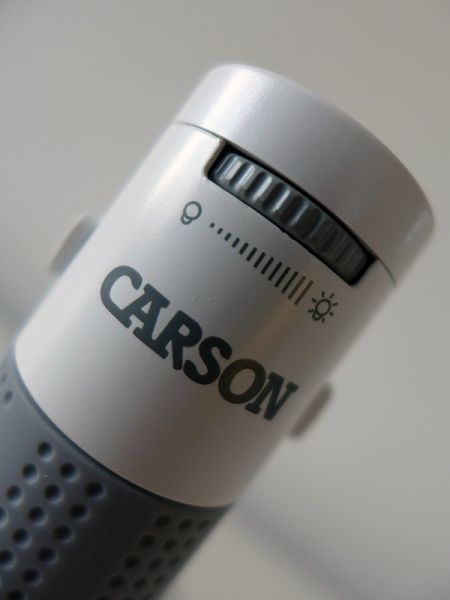 While they may be every day objects, there is something fascinating about things on a microscopic level. Over the course of our review we used the MM-840 to look at various every day items and despite having done this years before we still had a lot of fun this time around.

While we honestly found it hard to get passed the settings retention issue, we are hopeful Carson can update the Digital Viewer software to remove this issue and our only real complaint. The microscope was easy to use and despite its software’s shortcomings, the MM-840 was quite fun to use and produced acceptable images and videos of the items we magnified.

The Carson MM-840 has a recommended retail price of $79US and for more information, including where to purchase the microscope, please visit Carson’s product page. 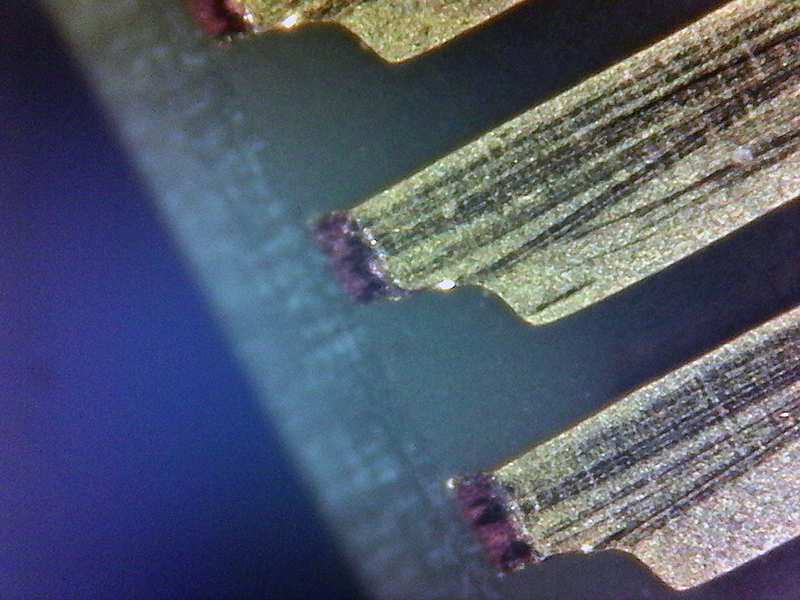