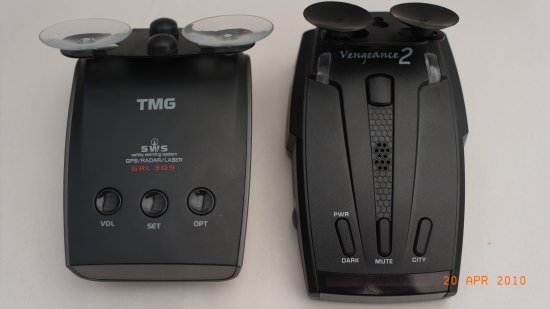 All I can say is where are the police when you really need ‘em??  Not really, but on this occasion it would have been nice to have them around so we could provide some adequate testing for the two units.

We even lent the two detectors to some “hoony” friends to test, with the test base being country and metropolitan areas.

We found one of the test units to be pretty exciting, and so this is how it went!

Vengeance2
Let’s begin with the Vengence2.  I can’t say we were surprised by the features as it has all the standard attributes of the normal “run of the mill” detectors out there.  It performed quite well with some “falses” as you would expect.  The Vengence2 says “it’s the only radar detector actually designed for use in Australia”, something we don’t dispute, but we did finally hate the unit telling us each time of start up that it was made by radars.com.au.  We were unable to turn that message off and it really did become annoying.

We ran the units side by side on a 450 km trip to Perth and when we did spy a police car the Vengence2 went off after the TMG had already alarmed us.  In fairness, however, this could very well be due to us having the Vengence2 set on C2 (Camera mode) rather than Highway mode which would have been a far less sensitive setting. We did also find that the positioning of the two units side by side caused false alarms in both of the units.  However, under normal use, you would not have two units in your car at the same time.

Now we sort of say “ho hum” to the Vengence2 as it performed like it was supposed to and pretty much like how we expected.

But the Road Eagle TMG, well that’s a different story and a lot more exciting.

This is a first generation change to the concept of radar detectors, lending it self to be a safe driving aid as well as a radar detector.  Let me explain. 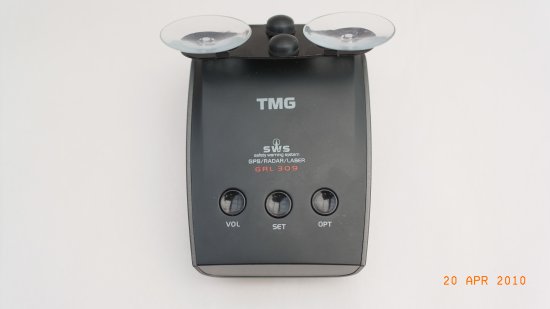 TMG Road Eagle
Whilst this unit looks no bigger than the rest of radar detectors in fact it has even a bit of a nondescript  exterior, but internally that is where it then becomes a surprise.

This unit has a huge potential.  It acquires satellites in approximately 2-3 seconds after power up and can then tell you the speed limit that is set for the street you are travelling on no matter what street or highway you are on.  It does this via an inbuilt GPS accessing of a database of maps automatically.

You can have two choices of settings either Adaptive Threshold Mode (which we liked) where wherever you drive the detector will know the maximum speed you SHOULD be doing in that area and advise if you are speeding.  It will also advise of activated and non activated cameras and radar equipment.  If you are going below the maximum speed for that position (eg school zone), then it will not bother to tell you.  (Why would you want to know?)  This reduces the number of falses that occur.

At all times you can have a reading on the detector of your current speed, and boy is this accurate.  Tests against sophisticated speed equipment showed that the TMG recorded speed was either 100% accurate or to be a maximum of half a km out at 100km/hour.

You can also have Fixed Threshold Mode where you select the speed for the street or area and key that in.  Advice and warnings are then based on this data rather than being automatic for the street or area you are travelling on.  We won’t say it didn’t false because it did, but because of the eradication of all warnings when you are not speeding, it then follows that any warnings that are activated you should take notice of.  We saw the product as a good driving aid for the simple reason that only a fool would disregard the 40 km per for school zones, but so often we don’t realise that we are passing through one.  The Road Eagle gives you this advice and that must surely be a good safety function of the unit.

It is not only school zones that that you are advised of, but also Highway exits, Dangerous intersections, Red light camera spots and Mobile camera alerts, to name a few.

Another function we found useful was that you can press the “set” button when in Adaptive Mode and the unit will verbally advise you of the maximum allowable speed limit for the road you are currently travelling on. This provides a good check as some of the map data is incorrect as far as speeds go in rural areas.  The user can also add in speed enforcement spots or programmable areas as well making the whole operation of warnings very flexible.

There is a cuckoo tone for on the hour advice and we found that to be a useful novelty, although you are advised that warning alerts have the priority over everything so they will always occur.

Advice of over speeding can be turned off or on in either mode, and you can have a voice or chime warning.

There is even a battery warning for low voltage, which would be useful to ensure that you don’t end up not being able to start your car if for some reason, your alternator is not charging within car manufacturing specifications.

Features
The TMG Road Eagle combines a number of innovative features to help eliminate false alerts:
– Adaptive Threshold mode: the radar detection function is only enabled driving at or above the speed limit
(the unit has an internal map of the speed limits).
– Fixed Threshold mode: the radar detection function will only become active if driving at or above a preset limit (user adjustable in 10km/h increments).
– Always On: With the above threshold modes disabled, the Road Eagle constantly monitors and alerts for radar at any speed.

The TMG Road Eagle displays current time when vehicle is stationary, vehicle speed when on the move and distance, in metres, from a known fixed camera or speed enforcement area. 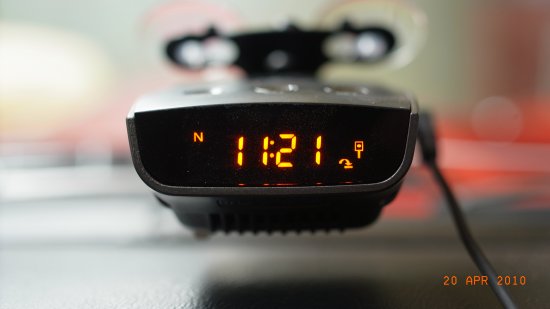 Pros and Cons for Road Eagle

Pros
• Low volume of falses
• Extremely informative
• Displayed speed is extremely accurate, even if you change tyres on your car etc.
• Small and compact
• Huge potential as maps improve
• Driver safety aid
• You are always aware of speeding or not
• You are not dependent upon speed signs to know the limits
• Areas where you likely to encounter speed traps and activated cameras are advised to you
• It does all that other radar detectors do yet has other valuable bonuses
• Map updates are done via your internet and PC
• Run largely by software making future improvements “do-able” (see suggestion* in cons)

Cons
• Road maps are not as good in the country as in Metropolitan areas, so maximum speed on some of the roads in the country area are recorded lower than they should be. (You can however, use Fixed Mode and set your own speed limits)
• (*)  Wouldn’t it be great if you could put in known “false” spots so the TMG ignores them completely as we all pretty much take the same route on multiple occasions.

Conclusion
Given the extremely high potential of the Road Eagle TMG in its functions as a Radar Detector and as a safe driving aid, authorities in Australia should test this unit and make it legal to use in all states.

Consequently, I see possibilities for this unit to eventually be the only legal radar detector available and supplied by www.radars.com.au at a retail price of $695 AUD.  Why would you bother buying any other brand of detector with their limited applications??