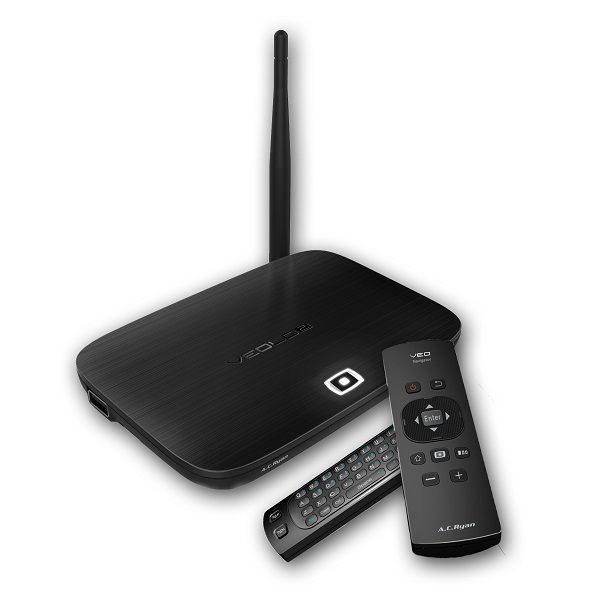 Back in June 2013, A.C. Ryan announced the launch of their new Android based smart hub. Building on the original Veolo, A.C. Ryan has beefed up the hardware and redesigned the interface. DigitalReviews has been lucky to receive a brand spanking new unit for review.

Having recently reviewed the PlayOn!HD3 and its designed for 3.5″ HDD chassis, the Veolo2 is was much smaller and lighter than I expected. This svelte little unit runs Android 4.2.2 “JellyBean” out of the box. Given the age of JellyBean, it would be have been a crime not be running it with a newly released product. Overall the package is very slim, with the majority of ports out the back and one USB host port on the side of the unit.

The VEO Navigator, for a remote with a QWERTY keyboard built in very slim and light. In some respects, it is so light and slim that it was almost awkward to hold. More on that later.

One of the most attractive features of the Veolo2 for me, is that it runs an Android operating system instead of a custom media player OS. Firing up the Veolo2 drops me into a customised launcher. A.C. Ryan has chosen to keep the custom launcher pretty light, with six major icons taking up the bottom of the screen. The first three Media, Games and Favourites are actually folders. The next three are apps being File Manager, Google Browser and Google Playstore. Five smaller icons are available, giving direct access to Settings, Notifications, App Drawer, Kill All Processes and Multitasking.

With the key functionalities directly available from the launcher, the basic functions of the Veolo2 as a media player is fulfilled. The Google Playstore naturally requires a Google login to function, but like any Android device, apps vastly expands the capabilities of the device.

Being a power Android user for a long time, my first impulse was to install all the applications I normally rely on. I did slow down long enough to check out what the Veolo2 came with. By default A.C. Ryan has provided a very lean ROM on the Veolo2 with only basic Google services pre-installed.

The built in video player handled all the files I threw at it, although admittedly, for convenience most of my online media now are either MP4 or MKV. It had no issues playing 1080p files that was on the USB storage. Across the wired network, I could still comfortably stream 1080p media via the 100 Mbps port. A bit of commonsense applies when using the wireless network. Just because the Veolo2 supports 802.11b/g/n does not mean you can stream large amounts of data at the slower speeds.

The Veolo2 functions effectively as any Android device would, it functions as one would expect of a smartphone or a tablet. From the testing, there were no restrictions as to what I could install from the Play store. The main difference is that it requires an HDMI connection to see the video output. There were no issues with music streaming, running a slideshow of photos, or even reading an eBook if that is what you want to do on your television (or any other HDMI monitor).

Shortly after launch, the Veolo2 received firmware 1.02 which was delivered via system update, making life a lot easier without having to separately download the firmware onto an USB key for the traditional update method. 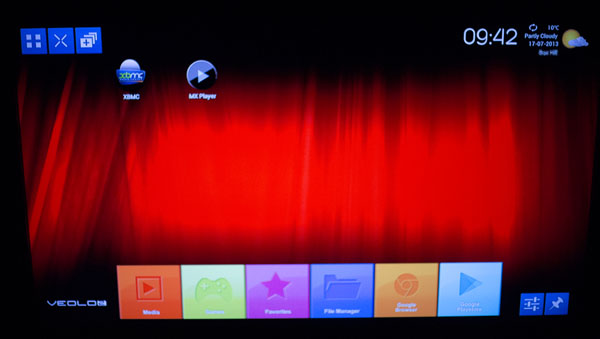 Admittedly, I really enjoyed being able to put on app that I want on the Veolo2 to run the device as I see fit. I found the built in File Manager functional but basic. As a personal preference I have used ES File Explorer for a long time and it was a matter of installing the app and using that instead.

With a little technical know how, I installed XBMC 12.2 on the unit and had an award-winning media center which extends the Veolo2 function well and truly beyond what A.C. Ryan provides by default. There are some caveats to running XBMC on Android, particularly around the ability to play 1080p files but the issue lies with XBMC and acceleration and not with the Veolo2.

The Veolo2 also supports webcams for Skype (see specification below), and had no problems handling a USB keyboard and mouse. Additionally I attached two USB hard disks via a powered hub for external storage access.

Up to now, I have avoided talking about the VEO Navigator. I was keen on the VEO Navigator for many reasons – it runs on RF so no more IR direct line of sight requirements. It functions as an air mouse and has a QWERTY keyboard on the flip side. The truth is, I almost trash the unit review because of the VEO Navigator.

In terms of performance, I expected something more in line with the Wii controller. With my review unit, I had to use greatly exaggerated movements to get the mouse to move across the screen. Similarly the keyboard response was slow and unreliable. After speaking with A.C. Ryan, it was determined that the RF receiver on my Veolo2 must be faulty which was disappointing. I resorted to plugging in USB keyboard and mouse to complete the review.

Additionally, I found myself accidentally pressing the keyboard buttons on the reverse side. I put that down to having to “brute force” the remote to get the mouse to move around the screen.

The Veolo2 never fully goes into shutdown mode. It will go into standby mode or reboot. This is generally not a huge issue but interesting to note.

* QWERTY Keyboard (on the flip side)

Not guaranteed that all USB webcam to work correctly. However, most models of Microsoft or Logitech webcams that do not require any special drivers should be compatible.

I think the A.C. Ryan Veolo2 is fantastic. As a power Android user I was totally comfortable working with the unit and making wholesale changes to apps, right down to installing and configuring XBMC as my default media center. I would recommend it with a smartphone OS and happy to tinker, particularly those with media stored centrally on a NAS. I was disappointed with the failure of the VEO Navigator feature. However I have worked around it using a wireless keyboard/mouse combination as well as an XBMC remote on my phone.

If you are looking for a simpler media center device, that has great features out of the box then the PlayOn!HD3 is a better fit.

Many thanks again to A.C. Ryan for providing the review unit.